This is the shocking moment a biker gang races through the streets of Essex letting off fire extinguishers and terrorising pedestrians.

The gang of at least 20 assembled for a Halloween ‘ride out’ in Romford on Sunday night.

CCTV footage shows some appearing to slap a pedestrian after driving recklessly and on the wrong side of major roads in east London and Essex.

Two bikers were arrested for dangerous driving, one for disqualified driving and one for the possession of drugs.

Jose Martins, the manager of Kosho nightlcub in Romford, told The Sun Online that twenty to thirty bikers raced past the entrance of the club.

He said: ‘You can see one of the bikers drive into the entrance, where he sprays the fire extinguisher and goes off. Then one of them hits a pedestrian as they drive past.

‘I was really surprised. It’s serious – if people think they can get away with it they can do it anytime. If they do it there’s no police that can stop them.

‘This is a pedestrian street so they shouldn’t have been anywhere near the club. You can see they drive right up on it, it could have been really dangerous.’

Superintendent Tania Coulson said: ‘The group of individuals who came out today were intent on causing crime, and we saw the same levels of anti social behaviour we have witnessed over the past few years.

‘The policing plan, working with our colleagues in neighbouring forces, meant that the group were targeted in areas which minimised the risk to the public, and could not enter central London.’ 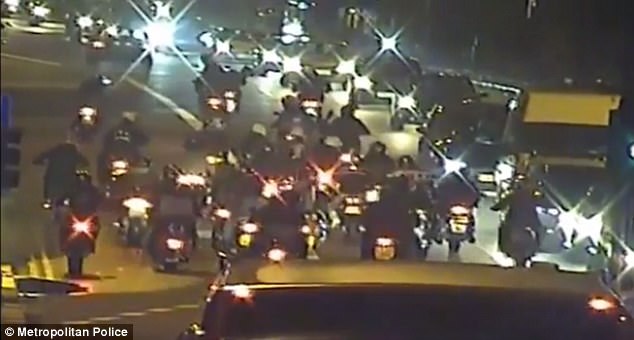