An ex-soldier has been caught on camera slashing a pub-goer’s face with a wine glass in an unprovoked attack on New Year’s Eve.

Christopher Darcy, 27, left Declan McLaughlin scarred for life after suddenly turning on him at The Commercial Hotel in Mossley, Greater Manchester, when his then partner collapsed in her seat claiming her drink had been spiked.

Mr McLaughlin, who is in his 20s, had simply asked Darcy if his girlfriend was ok but suffered a 6cm cut to his left cheek and a 7cm cut to his neck during the savage assault

And he required at least four stitches after his skin was left ‘hanging down’ from his face and neck.

Christopher Darcy, 27, left Declan McLaughlin scarred for life after suddenly turning on him at The Commercial Hotel in Mossley, Greater Manchester 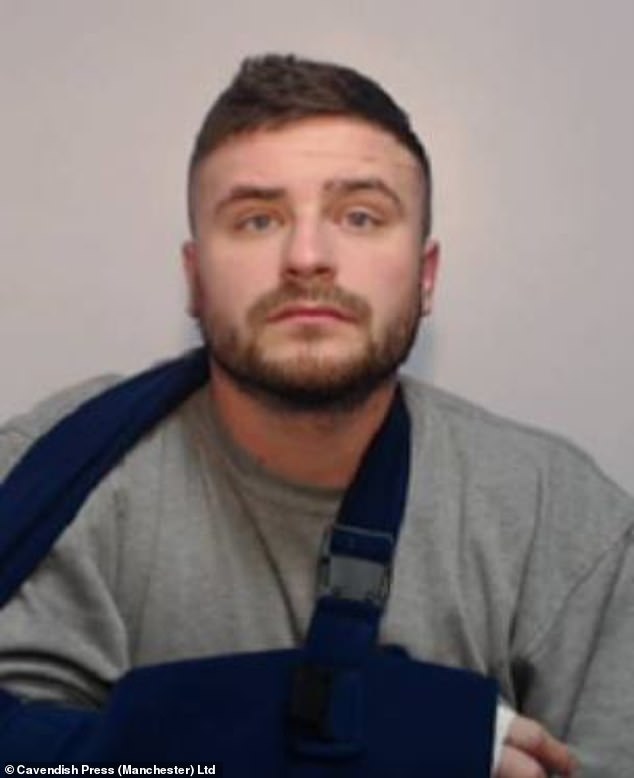 Mr McLaughlin, who is in his 20s, had simply asked Darcy (pictured) if his girlfriend was ok but suffered a 6cm cut to his left cheek and a 7cm cut to his neck during the savage assault 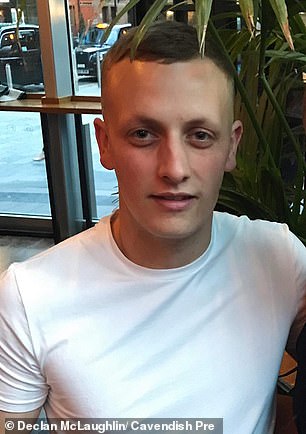 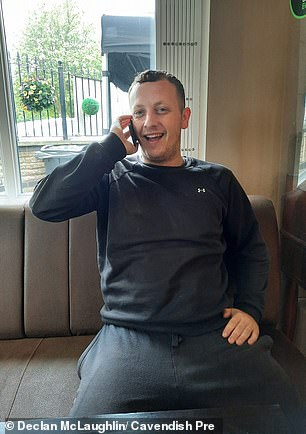 Almost three years since the attack on December 31, 2018, the scarring has not yet healed and he is still suffers from tearful panic attacks when recalling the incident.

Darcy, who served six years in the army and saw action in the Afghanistan conflict before being discharged in 2016 due to mental health issues, blamed the attack on him failing to get help for his PTSD and said he was like a ‘powder keg waiting to explode.’

He has since undergone cognitive behavioural therapy.

Footage of the horrific assault emerged after Darcy, of Huddersfield, West Yorkshire, was jailed for three-and-a-half years after he admitted wounding with intent to cause grievous bodily harm.

Minshull Street Crown Court in Manchester heard Mr McLaughlin of Mossley, had been out in Manchester city centre with friends before returning to his hometown to see in the new year.

Prosecutor Paul Dockery said: ‘He plainly was affected by drink but able to hold conversations and walk from place to place, finally ending up in The Commercial pub spending some time there.’ 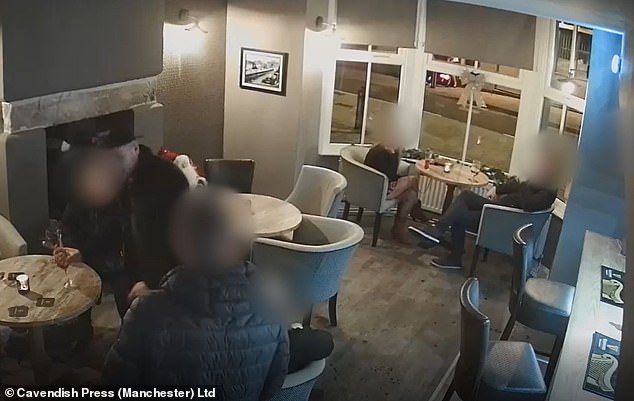 Darcy, who served six years in the army and saw action in the Afghanistan conflict before being discharged in 2016 due to mental health issues, blamed the attack on him failing to get help for his PTSD 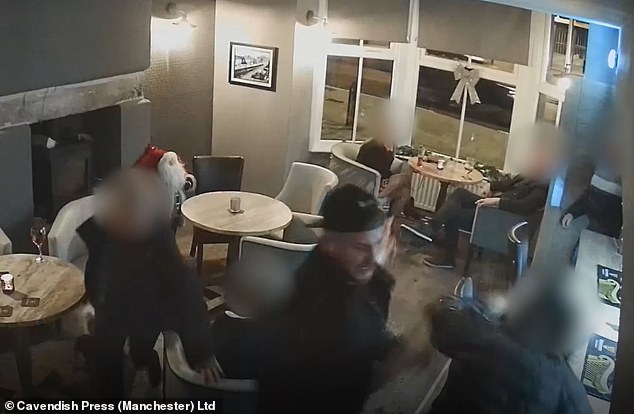 The court heard the victim entered the room at which point Darcy’s then partner mysteriously sank to the floor.

There was then an exchange of words between the two men before Darcy picked up the wine glass and thrust it into the victim’s face.

The court heard the woman was unable to explain why she collapsed at the table. Mr McLaughlin later claimed Darcy and his girlfriend had simply ‘fallen out’ and Darcy and told him to move away in the moments before the attack.

In mitigation for Darcy, who now works as a steel erector defence counsel, Brian Williams said: ‘From a very early age, the defendant has had a lot of unresolved anger issues and this has been added to by experiences in active service in Afghanistan.

‘He has seen the kind of things that no one should see. His unresolved issues have been added to by this troubling experience on active service. 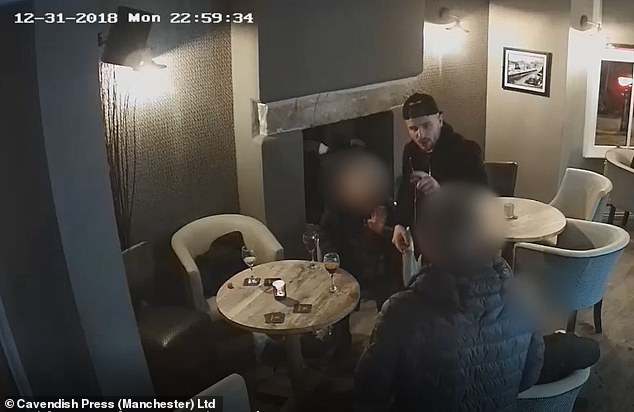 ‘By the time he left the army, he was a powder keg but he did seek help from the army. This is no criticism, but there was very little help. He was effectively told to ”man up” for a number of years.

‘He tried to self-medicate. He used alcohol and drugs to block out the terrible things that had happened, to try to feel normal. As we all know, that doesn’t work. During the incident itself, something was said, and the powder keg exploded.

‘This defendant then realized that he had to do something, had to sort out the situation. Since this incident, he has been doing a lot of growing up. He managed to steel himself and go and seek help. It’s something he didn’t do before. He sought help from an organization called Future for Heroes and an organization called Project Nova.

‘He apologises to the complainant. Having experienced trauma himself, he knows what it’s like. The thought of a sentence of immediate custody terrifies him.’ 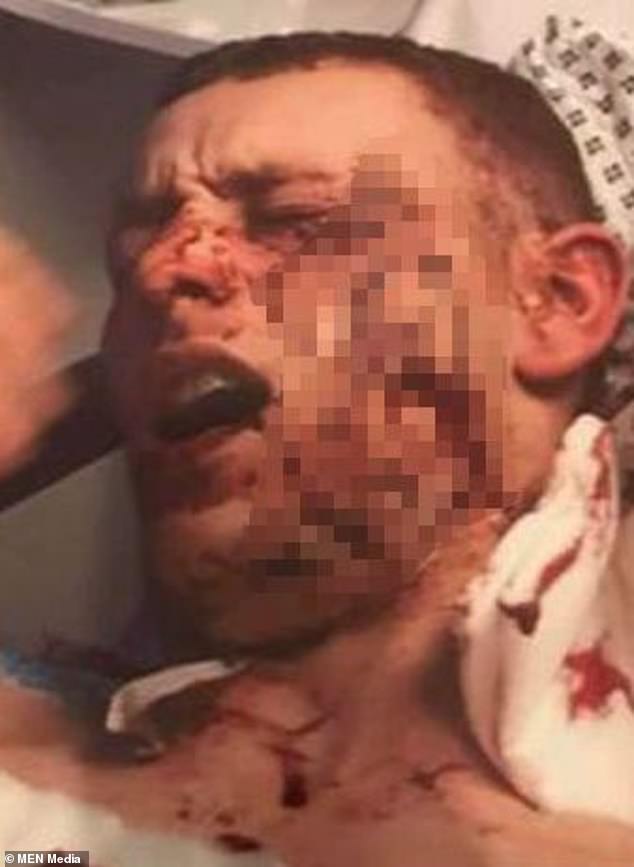 Sentencing Judge Maurice Greene told Darcy: ‘You were sat at a table with your then-girlfriend, and she sank to the floor – whether from drink or a drink being spiked, it’s not clear. The complainant came past you and there were clearly words between you.

‘You say in the report you were telling him to go away, and he wouldn’t go away but he was certainly not making any aggressive moves towards you.

‘You deliberately picked up a wine glass and struck him in the face with it.. Mr McLaughlin is still now, nearly three years later, suffering panic attacks. He still has some scarring to his face as well. He lost his job for some amount of time and it’s had a somewhat significant impact on him.’

The judge added: ‘There have been diagnoses of depression, alcohol dependency, ADHD and PTSD, a lot of which is due to the six years where you served your country in the army and in Afghanistan. You were discharged in 2016 because of your mental health.

‘But the fact that you have PTSD does not explain why you acted in the way you did, without consequence.’

After the case Mr McLaughlin said: ‘I’m still traumatised, it still doesn’t feel real. I have got counselling as it has affected me. It’s not left me, I’m not the same person I was.’

He added: ‘ We were just having a conversation, then he just picked the glass up for no reason. It was all of a sudden, it was that first hit and then he was gone. He will just do just 17 months or so yet I have suffered.’