This is the shocking moment a member of the public is karate-kicked in the face by a suspected fly-tipper he was filming.

The victim, a wildlife enthusiast who does not wish to be identified, was looking for a peregrine falcon to snap when he saw two men drive a white van down a remote country lane in Dorset.

He followed them on foot and when he caught up with the pair he found them apparently dumping rubbish inside a burnt-out vehicle already left there.

The incident happened on Watery Lane on the outskirts of Burton, near Christchurch, Dorset, on Tuesday.

A member of the public caught two men ‘fly-tipping’ down a remote country lane. He blocked their escape and forced them to retrieve waste they had dumped in a burned out car

The public-spirited man started recording the two men on a video camera for evidence.

On the footage, the victim can be heard shouting at the two men ‘Pick that up! Pick up the stuff you’ve left stuff there. Pick it up! Go back!’

He then blocked their escape by standing in front of the Peugeot van.

The driver has no choice but to reverse back towards the dumped rubbish.

As one of the men gets out and starts retrieving the waste he aims a flying kick at the 51-year-old victim.

The force of the blow knocked the camera out of his hands and sent it flying to the ground. 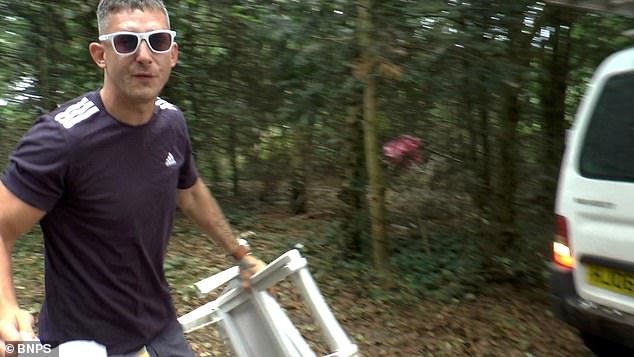 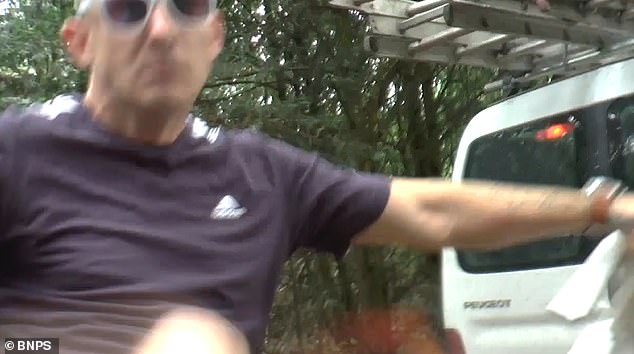 Suddenly the man turns aggressive and karate-kicks the person filming him in the face, bruising his fingers and knocking the camera out of his hand

The man also suffered bruising to his fingers in the assault and had to go to hospital.

He reported the incident to the police and sent them the footage – which clearly shows the number plate of the van in question.

But he received a reply to say that a police officer would contact him on October 3 and they only after that will they speak to the suspects.

The man said: ‘I was filming wildlife up the lane and saw this white van go down a restricted road where a burned out car is still waiting to be taken away by the council from several weeks ago.

‘The area has been notorious for fly tipping over the years.

‘I followed the van because I suspected they were fly-tippers.

‘I started filming them as they began unloading the van.

‘I was shaking through nerves but was quite pleased when they started putting the stuff back into their van.

‘I was going to let them off and not do anything with the footage but then I was attacked. 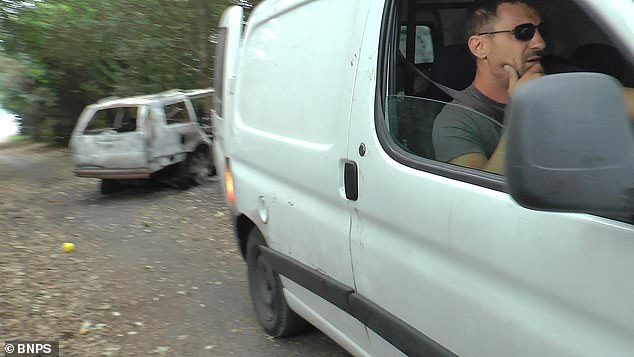 A second man waits in the white Peugeot van as the other retrieves the waste. The incident was reported to the Dorset Police and they are making enquiries

‘The guy had so much stuff in his arms that I was really shocked when he kicked at me.

‘I didn’t feel any pain but then I looked at my fingers and they were bruised.’

A spokesman for Dorset Police conformed they had received a report of assault and criminal damage in relation to the incident.

He said: ‘It was reported that a small white van drove down a restricted footpath and the occupants were seen to unload bags in the area.

‘A member of the public asked them to put their stuff back, but was then reportedly assaulted and damage was caused to a camera he was holding.

‘Enquiries are ongoing into the incident. No arrests have been made.’