This is the moment a fox hunter squirted fox ‘p***’ in an elderly protester’s face – reportedly leaving him sick and needing blood tests.

The 64-year-old victim, known only as ‘Bob’, can be heard asking what the hunters had used to lay a scent, to which self-employed Julie can be heard replying ‘p***’.

Shocking footage captures the moment Bob asks Julie again ‘what is it’ in the bottle, she responds ‘pi**’ and sprays it in his face.

Bob was left ‘really shaken’ as he reportedly suffered blocked sinuses and a sore throat after the incident and had to have blood tests because he felt unwell.

Julie was found guilty of common assault at Maidstone Magistrates’ Court, Kent, on Tuesday and issued with a 12 month conditional discharge.

The 51-year-old was also ordered to pay £640 in court costs. Harry Blackhurst, of West Kent Hunt Sabs, has hailed the sentence as a ‘massive result’ after claiming it was the first time any Kent hunters had been convicted.

Mr Blackhurst, from Kent, said: ‘As it stands now, Julie has a criminal record. ‘It’s a massive result for us because it is the first time any member of a hunt in the county of Kent has been convicted. On that basis we are happy.

‘The 64-year-old in our group [who she squirted with fox urine] is affectionately known as ‘Uncle Bob’. ‘He was really shaken up after the incident and when he got back in the vehicle he absolutely reeked. 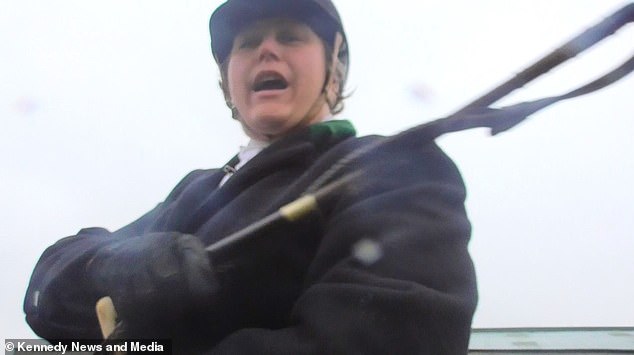 ‘We almost had to ask him to get out because we were feeling sick being around him. He got terrible blocked sinuses and a bad sore throat. He actually went to the doctors about it after and had a blood test.

‘We didn’t know what was in that bottle. It could have been anything. Think of all the diseases foxes could carry. I think she could have had a stronger sentence. Twelve months conditional discharge for being convicted of common assault is about as lenient as it gets.

‘But no matter what the hunters throw at us, whether it’s fox juice, shooting down our drone or violence, we will not be deterred in the pursuit of justice for our wildlife.’

He and Uncle Bob had been joined by their colleagues on New Year’s Eve 2018 to ‘monitor’ the hunt and make sure they weren’t breaking the law.

After asking two hunters on horseback what they had used to lay a scent trail, a middle-aged man in front claimed they had used aniseed – a common scent used in fox hunting.

But interrupting, Julie claimed they’d used ‘piss’, which was confirmed as fox urine and water, before throwing it over her shocked victim. 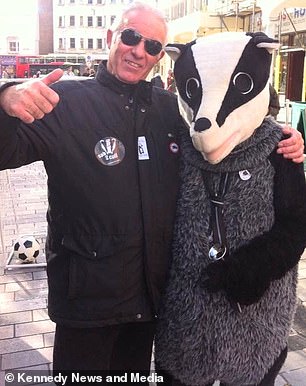 ‘We were monitoring what they were doing [to ensure they were not] illegally hunting.

‘We were filming them coming back to the farm [as it was raining] and they walked past us, which is when this happened.

‘They said we were trespassing when we weren’t – we were on a public footpath.

‘My colleague who got the fox juice thrown in his face was trying to show them the map to prove we weren’t on private land. That’s when this woman aggressively squirted the fox p*** in his face.’

A major concern for hunt saboteurs is how difficult it can be for police to prove fox hunters were illegally hunting when an animal is killed.

West Kent Hunt Sabs and other saboteur groups are concerned with catching illegal activity and holding hunting groups to account.

Mr Blackhurst said: ‘In 2004 the hunting act was passed which made it illegal to chase a mammal, including foxes, with a pack of hounds.

‘The fox hunts invented an activity called trail hunting where they use the scent of a fox and someone supposedly lays a trail for the hounds to follow the scent.

‘If when following a trail hounds accidentally pick up the scent of a live fox, they can say it was an accident, which is a massive flaw in the law.

‘If they ever get caught they can just say it’s an accident, so it would be up to the police to prove that it wasn’t an accident. ‘That’s why we do what we do.’

‘The hunt acts lawfully within the confines of the Hunting Act 2004 and takes every measure to ensure this legislation is adhered to. For trail-laying we use an ethically sourced scent which is derived from the products of a controlled wildlife management programme.’

The Crown Prosecution Service (CPS) confirmed sentencing details and that the liquid was ‘fox urine and water’.