A journalist who travelled to his hometown of Huddersfield to investigate the shooting by police of an alleged drug dealer is stunned when a local schoolboy informs him he’s no longer afraid of gunshots because he’s ‘used to it’.

Investigative reporter Mobeen Azhar grew up in the West Yorkshire town, and returned to film a new six-part documentary series, Hometown: A Killing – available on BBC3.

Mobeen was there to investigate the death of father-of-two Mohammed Yassar Yaqub, 28, who was shot dead by police on the M62 near Huddersfield on January 2, 2017.

His killing sparked protests on the streets of West Yorkshire and a ‘Justice for Yassar’ campaign, especially after it emerged that armed officers were reportedly not wearing body cameras even though the operation was ‘pre-planned’.

Investigative reporter Mobeen Azhar grew up in the West Yorkshire town of Huddersfield and returned as part of a new six-part documentary series, Hometown: A Killing, the first episode of which aired on BBC One last night

But during his stay back home, Mobeen was shocked when a double stabbing took place on the road he grew up on in Birkby, followed by a shooting in broad daylight nearby three days later.

A local lad who heard the gunshots suggested it was a ‘revenge’ attack for the knifing, and said he believed both were the work of gangs, while another resident said there have been numerous shootings and stabbings in the last few months.

She added: ‘It’s getting out of control. You can’t go to the shops without a bullet-proof vest anymore.’

But Mobeen was horrified when he spoke to a young boy called Mikala, who admitted he wasn’t scared of the gunshots he heard because ‘living around here you’re used to it’.

‘There were gunshots down there, there was stabbings, there’s everything round here. It’s scare tactics – to tell people you’re not messing round here, that’s basically it,’ he explained. 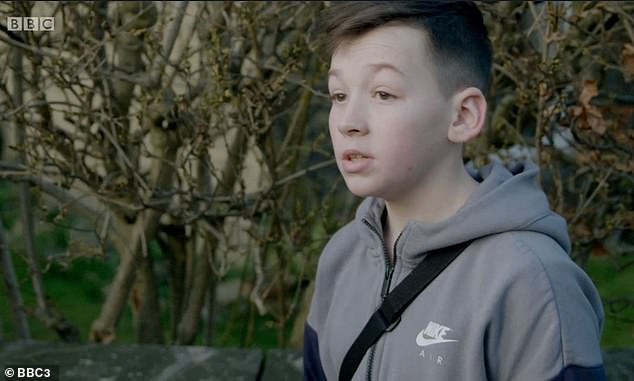 When speaking to the locals about a recent stabbing and shooting that took place near where he grew up while he was there, Mobeen is shocked when schoolboy Mikala, pictured, tells him he isn’t afraid of gunshots anymore because he’s ‘used to it’ 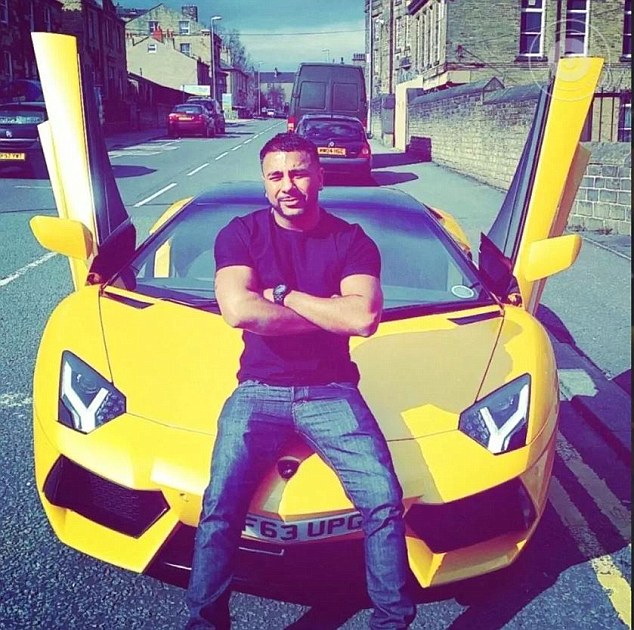 Mobeen was in Huddersfield to investigate the police shooting of alleged drug dealer Yassar Yaqub, pictured lounging on the bonnet of a yellow Lamborghini sports car, in January 2017

‘People what have bought drugs and not paid for them, and they’ve had a phone call to say that the person what owes money has been around a certain area, so they’ve gone round that area and just fired some bullets off (sic).’

Asked how he knows all this, Mikala responded: ‘Life. Huddersfield. Stuff like this happens practically every day, and it’s not a laughing matter really because if you’re with your kids and someone fires a bullet, it could hit something and bounce off and still kill you. It’s just how it is in Huddersfield, sadly.’

Mobeen admitted: ‘I couldn’t believe the violence is so common this little kid was able to school me on the politics of the street.

‘On every level, this was so wrong. This wasn’t the West Yorkshire I remembered.’ Mobeen admitted: ‘I couldn’t believe the violence is so common this little kid (pictured with his mum) was able to school me on the politics of the street’ 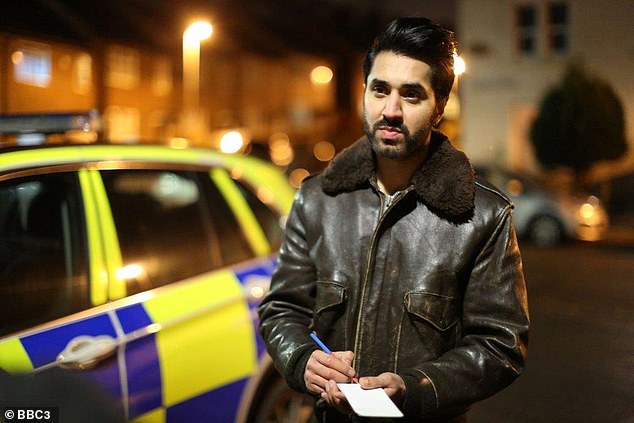 Though Yassar Yaqub was described in court as an office clerk, rumours of drug empires and money laundering began circulating about the flash car-loving dad, who gave himself the nickname ‘Stud Badboy’.

An inquest into his death heard he died from gunshot wounds to the chest, while a handgun, bullets and a silencer was found in the footwell of his Audi by police.

However, his father Mohammed said he was the ‘perfect son’ and his daughter described him as having a ‘golden heart’, while his visibly distraught mother Safia had to be physically supported by mourners at his funeral as his body was taken to a cemetery for burial.

Yassar’s family believe he was unlawfully killed by the police and are still awaiting the outcome of an independent investigation into the shooting. 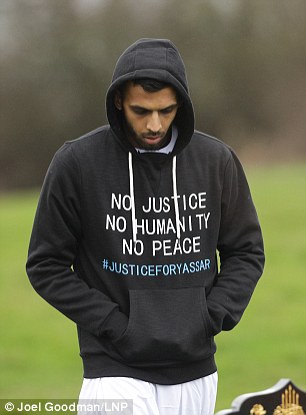 Asking around at a memorial service, Mobeen was told by mourners that Yassar was a ‘humble person’ who was ‘very liked’ and would be ‘there to help you’ if you needed anything.

But as Mobeen delved deeper, many local residents – including his former school friends – were reluctant to speak about the case, despite it once being the talk of the town.

One friend of Yassaf’s family said it was ‘difficult’ to speak about it, while an old pal of Mobeen’s said he’d heard ‘rumours’ but wouldn’t go into detail.

But one, Ilios, an imam who leads prayers in Bradford and Huddersfield, was prepared to share his views.

He told Mobeen he’d spoken to people at his local mosque near where the shooting happened who told him Yassar was known for being involved in criminal behaviour and there was ‘very little sympathy for him’. 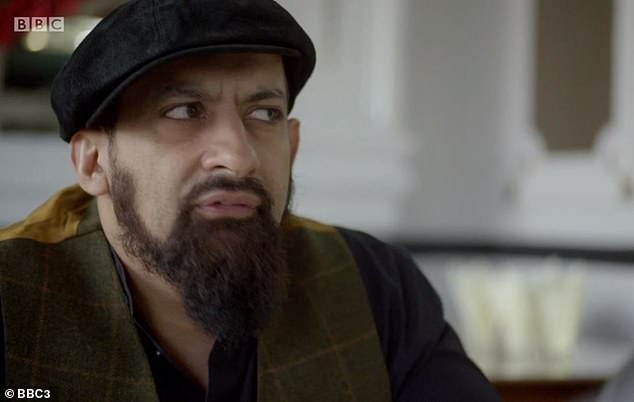 Mobeen’s friend Ilios, an imam who leads prayers in Bradford and Huddersfield, was prepared to share his views

‘Some people described [Yassar] as a plastic gangster – wannabe gangsters who love the whole persona that’s involved with that criminal lifestyle; the money, the clothes, the women, the cars, almost a Scarface-type persona,’ he explained.

When Mobeen said he’d come up against a lot of ‘fear’ when trying to broach the topic with people, Ilios explained: ‘People are scared of criminal gangs. There is a fear and an intimidation that comes… If I’m going to speak directly about people who are involved in drug supply, in crime, then there’s going to be repercusions for me.

‘The other reason people don’t want to talk about it is they’re thinking that, if I criticise the community, then I feed into far right narratives. There is an attitude that you don’t wash your dirty linen in public, don’t say this. 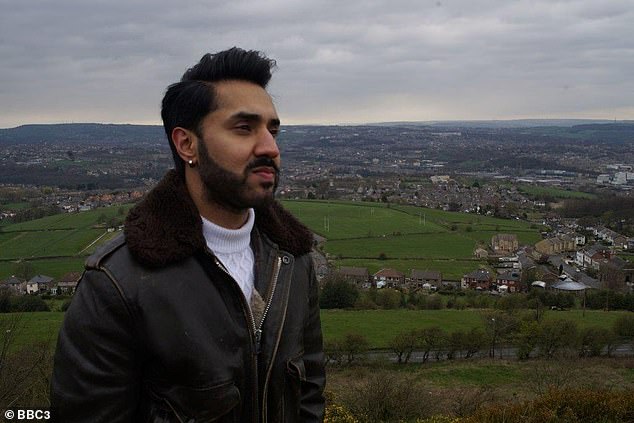 ‘But by not talking about it you’re going to allow these stereotypes and these negative perceptions to persist.’

Mobeen then visited one of his eldest friends, Sabir, to see if he was purely being nostalgic about his hometown, or whether it’s always had these problems.

Sabir revealed his younger brother got into the wrong crowd and began selling drugs and eventually got shot, which was linked to his dealing – but no conviction was brought against the shooter.

‘Maybe they did [catch them] but there’s unwritten rules about snitching and stuff like that, so maybe factors like that came into play,’ Sabir said, adding that his brother is doing OK now. 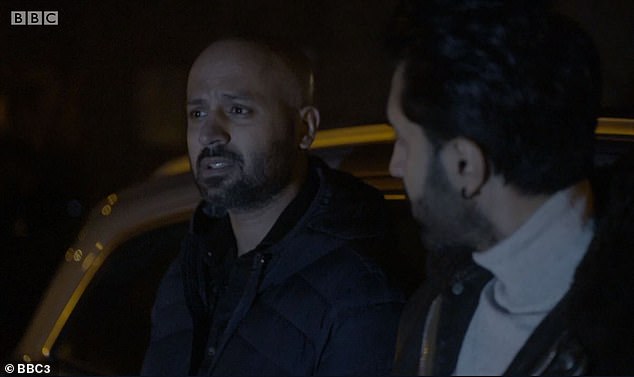 Sabir revealed his younger brother got into the wrong crowd and began selling drugs and eventually got shot, which was linked to his dealing – but no conviction was brought against the shooter 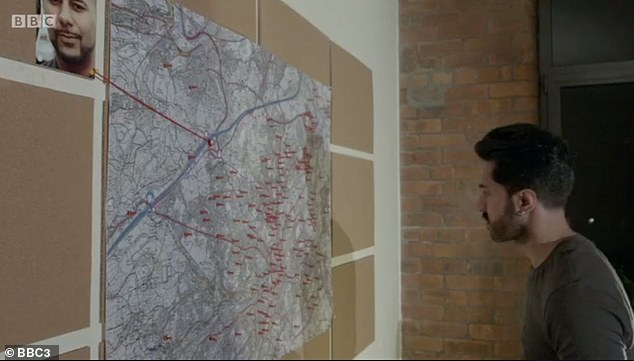 Mobeen discovers 95 gun-related incidents had taken place in Huddersfield since January 2017 – with eight in Birkby alone. In less than two years, there have been more than 200 firearms-related incidents

At the end of the episode, Mobeen admitted Huddersfield wasn’t the sleepy town he’d left behind. While gun crime had gone down in most regions across the country, in West Yorkshire it had risen by more than 50 per cent in the past decade.

Since January 2017, when Yassar was shot, Mobeen found 95 gun-related incidents had taken place in Huddersfield – with eight in Birkby alone. In less than two years, there have been more than 200 firearms-related incidents.

‘It’s meant to be a sleepy little town,’ Mobeen said. ‘But it looks like a war zone.’

The complete series of Hometown: A Killing is available on BBC iPlayer.