A group of suspected migrants were seen staggering from the back of a lorry and struggling to breathe after being rescued on the M25 in Essex.

The group of around ten men were filmed being helped to climb down from the inside of a truck by police officers.

All ten men were arrested and the lorry driver was also taken into custody after they were discovered near Waltham Abbey, Essex Police said.

Officers were called to reports people were inside a lorry container at around 6pm on Thursday evening, according to police.

No further details of the men’s ages or nationalities were immediately released.

In a video taken at the time, some of the men could be seen falling to their knees as they got out of the vehicle.

Around ten men were seen climbing out of the back of a container lorry on the M25 in Waltham Abbey, Essex, on Thursday evening. All the men were arrested along with the driver

The men could have been in the refrigerated and non-ventilated lorry for hours, as the vehicle they appeared to be travelling in was branded with the name of a fish company based in northern Poland, called Paula Fish.

An eyewitness who saw the group being helped by the emergency services told the Sun Online it ‘looked like they were struggling to breathe’.

An Essex Police spokeswoman confirmed the ten men were found in the rear container.

She said: ‘Police were called to reports of people inside a lorry container at around 6pm.

‘Officers attended and found ten men in the rear of the container.

‘They have been arrested on suspicion of immigration offences. One was taken to hospital for medical treatment. The driver has been arrested. Inquiries continue.’

The discovery comes as a man from Northern Ireland was charged with human trafficking offences after the bodies of 39 migrants were found in a refrigerated lorry container in Grays, Essex, last month.

Christopher Kennedy, 23, was arrested in the early hours of Friday morning on the M40. 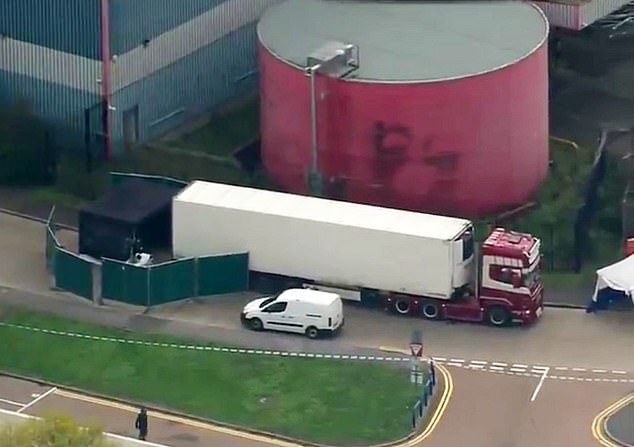 Christopher Kennedy was charged with human trafficking offenses after the bodies of 39 migrants were discovered in a lorry in October. Pictured (above) is the truck in Grays

Essex Police said he is due to appear at Chelmsford Magistrates’ Court on Monday.

Ten teenagers, including two 15-year-old boys, were among the bodies of 39 Vietnamese nationals discovered in the early hours of October 23, shortly after the lorry arrived on a ferry from Zeebrugge in Belgium.

The driver, Mo Robinson, 25, from Northern Ireland, is expected to appear at the Old Bailey on Monday charged with 39 counts of manslaughter, conspiracy to traffic people, conspiracy to assist unlawful immigration and money laundering.

Extradition proceedings have also been launched in Ireland to bring Eamonn Harrison, 22, from Mayobridge in Newry, Co Down, to the UK.

He appeared at Dublin’s Central Criminal Court on Thursday after he was arrested on a European arrest warrant in respect of 39 counts of manslaughter, one count of human trafficking and one count of assisting unlawful immigration.

Detectives have also urged Ronan Hughes, 40, and his brother Christopher, 34, from Armagh, Northern Ireland, to hand themselves in. They are wanted on suspicion of manslaughter and human trafficking.