Tempers boiled over at the ISM Raceway in Phoenix on Friday, as two NASCAR drivers exchanged blows after their elimination from the first round of the Cup Series.

In the explosive footage, Daniel Suarez can be seen leaping over a concrete wall and exchanging some heated words with fellow driver Michael McDowell.

Clearly unimpressed by the Mexican’s demeanor, McDowell – still wearing his racing helmet – can be seen lunging for Suarez’s throat, and punching him in the head.

Suarez responds by grabbing McDowell by the chest and throwing him to the ground as the pair continue exchanging blows.

Shortly after Daniel Suarez (left) leaped over a concrete wall, McDowell (right) made a lunge for his throat and delivered the first blow 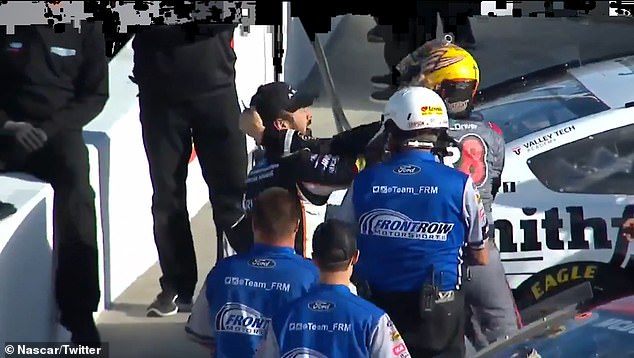 Suarez responded by throwing some punches of his own, before throwing McDowell to the ground 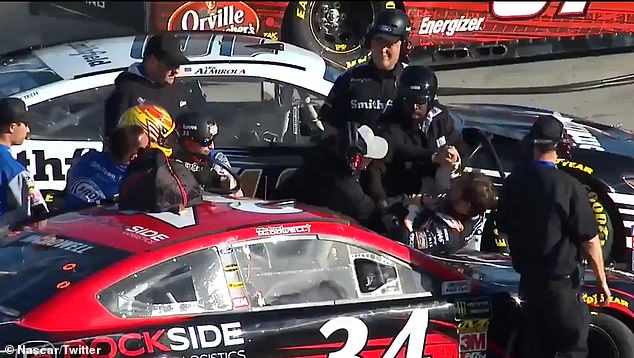 Crew members to scrambled to pull the pair apart 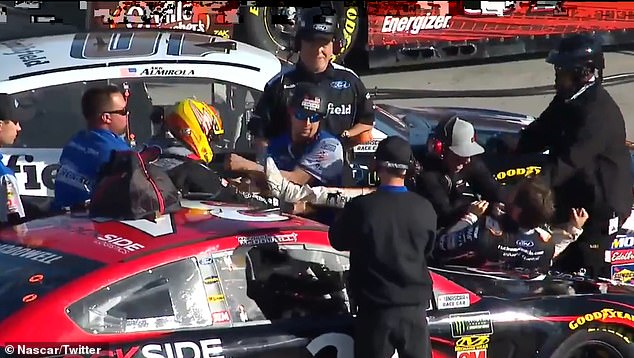 Crew members rushed to separate the scuffle before it escalated any further.

Suarez found himself pinned against the bonnet of a car by one bystander, with McDowell attempting to get the last shot in, before desperately pulling at his leg.

The two drivers had been jockeying for position on the track just moments before. Their private jousting ultimately hindered both of their times, causing each of the pair to blame the other for their disappointing finish.

‘It’s just a lack of respect,’ Suarez told reporters after the fight. ‘Everyone here knows the second lap is a good one. You have to try to get out of the way if somebody is coming in your lap. He didn’t.’

McDowell however insisted it was all a ‘miscommunication’. 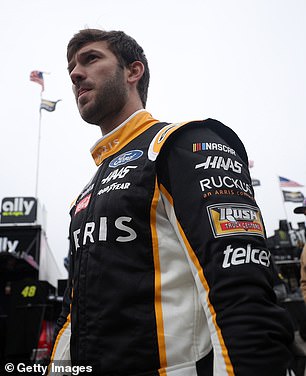 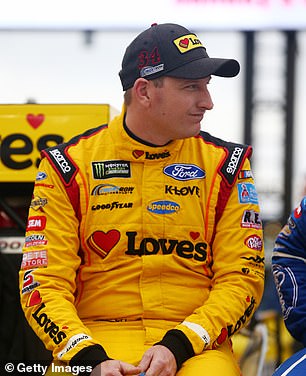 After the race Suarez (left) blasted McDowell (right) for his conduct on the track. However, according reports, the pair later sat down to talk things over

‘It’s just unfortunate. He was upset. I held him up on his good lap and then he tried to crash us and I just didn’t appreciate it,’ McDowell said.

He also went on to describe the brawl as ‘heat of the moment stuff’, saying it all comes part of an ’emotional sport’.

McDowell qualified in 27th and Suarez finished in 28th.

The two drivers later sat down with one another to discuss the track antics amicably, according to CBS.