Lindsey Mannion’s parked car was hit while she was away from her Derby home on Friday, February 9

A woman says her car has been severely damaged by an Asda delivery driver who she has claimed failed to stop after the collision.

Lindsey Mannion’s parked car was hit while she was away from her Derby home on Friday, February 9.

CCTV footage, owned by Mrs Mannion’s neighbour, shows her Mitsubishi Outlander visibly shaking after being hit by an Asda delivery driver just after 9am.

The crash caused significant damage, with the side of car dented and a hole left in one of the panels. Tyres were also damaged due to the impact of the collision.

The 42-year-old says the driver didn’t stop after the collision and left her needing to call the supermarket to try and track the driver down.

Asda says it had launched an investigation into the incident.

Mother-of-two Mrs Mannion said she has been left far from happy with Asda’s response and said she has had to wait more than a week for an apology from the supermarket and to receive the driver’s details.

She said: ‘I knew nothing about it until the following morning and looked through the window and thought ‘what’s happened to my car?’

‘Nobody saw anything but my neighbour has CCTV footage. He went through it and came over to me saying ‘I know what’s happened, watch this. 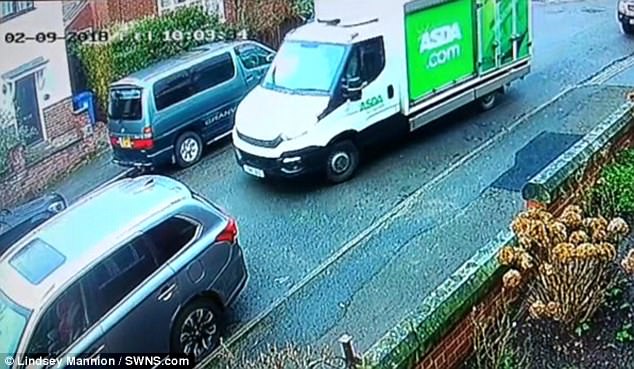 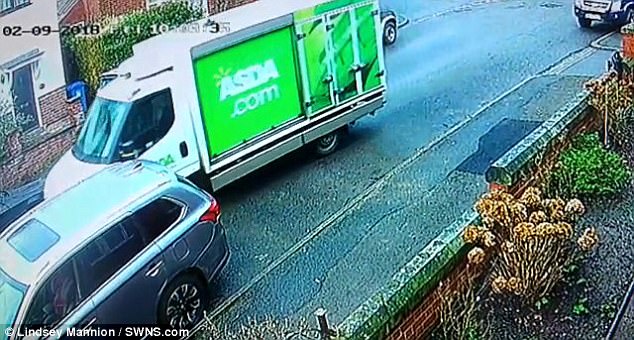 ‘So I looked and couldn’t believe what I saw – he never even stopped.

‘I thought ‘what a cheek’. Those Asda vans have got dash-cam footage at the front and sides and I just could not believe that a driver representing Asda would just leave and cause all that damage and think he could get away with it.

‘He knew he did it. Accidents happen but you shouldn’t drive off.’

Mrs Mannion, who works as an account manager, said the damaged two-year-old car was not a write-off and was being repaired.

But she added it meant she was unable to take her two young children bike-riding this weekend because she is unable to tow bikes on her hired replacement car.

‘It’s taken a week for Asda to get in touch with the details and apologise,’ she added. 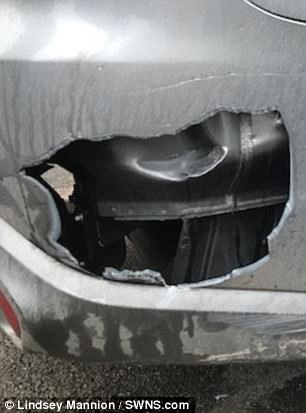 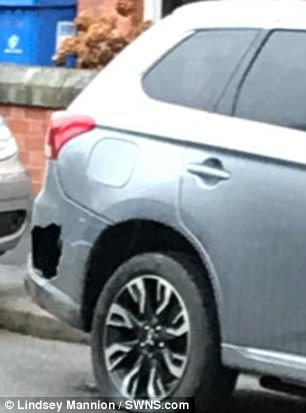 The crash caused significant damage, with the side of car dented and a hole left in one of the panels. Tyres were also damaged due to the impact of the collision

‘I’m very upset that the driver didn’t stop. If I did that to somebody’s car there’s no way I’d drive off and leave them in that state. I think it’s disgraceful.

‘It’s taken a week to get a sorry from them and I think the footage speaks for itself.’

Asda said they had apologised to Mrs Mannion following the incident.

‘We’re very sorry for the inconvenience that this has caused to Mrs Mannion,’ a spokesperson for the store said.

‘We are thoroughly investigating the matter and will remain in touch with her throughout to resolve this.’

The incident has also been reported to police.