A topless man hits a woman in the face before throwing a punch at another woman during a brawl at a park in Essex.

In the shocking footage a large crowd is seen gathered at a park opposite the Kings Oak Pub in High Beech, Loughton, Essex.

The video, recorded yesterday, shows a brawl already underway with multiple men and women involved in the tussle. 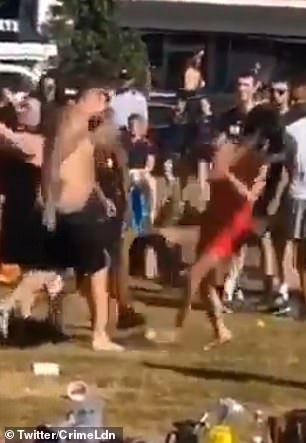 Shocking: The shirtless man hits the woman in a red dress in the face during a brawl on a green space in High Beech, Loughton, Essex

The shirtless man is seen kicking somebody who has fallen to the ground before hitting a woman in a red dress in the face.

He walks away before throwing another punch at a woman with a yellow bag.

A crowd of onlookers cry out at both punches.

Two men near the brawl then try unsuccessfully to shepherd the shirtless man away from the crowd.

He is seen staggering towards the group of people with his fists bunched. 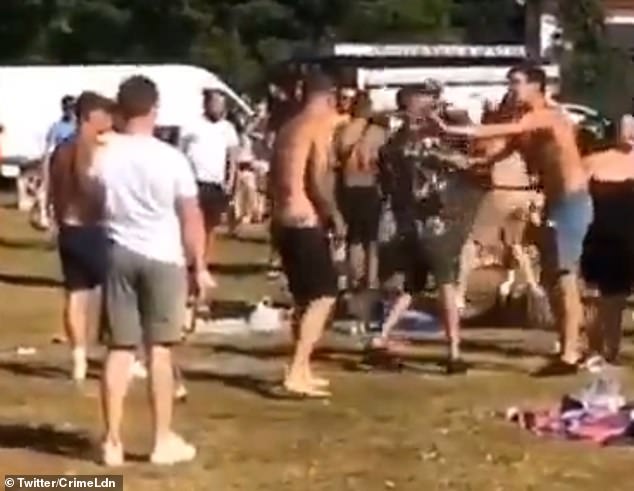 A man stood near the camera yells at the topless man: ‘Oi, what, are you a big man because you hit girls?’

At the end of the video, car horns are heard being used.

The Epping Forest Town Team of Essex Police tweeted today and said: ‘After numerous reports of ASB & criminal offences occurring yesterday in an area of Waltham Abbey, and teams have conducted stop & searches this evening, group of teenagers dispersed from the area. 1 arrested and on their way to custody. #yousaidwedid’

It is unknown whether their tweet is in relation to the incident in the video.

Essex Police have been approached for more information.