This shocking video captures the moment a woman rips the windscreen wiper off an Uber then uses it as a microphone before tossing it into the street.

The video, filmed in Liverpool city centre, shows a woman stagger across the road holding onto a man’s hand.

As she reaches the pavement, she stops behind a black Kia operating as an Uber.

The woman, dressed in a bright red dress with a large slit up the thigh, then lunges at the car and starts grappling with the back windscreen wiper.

A witness can be heard encouraging her and shouting ‘snap it’ before saying ‘that’s heavy that’.

The video, filmed in Liverpool city centre, shows a woman stagger across the road holding onto a man’s hand

The woman rips the wiper from the back of the car, seeming to use it as a microphone before stumbling up onto the pavement.

A man in a white shirt and black gillet then walks over to her and puts his arm around her, at which point she throws the wiper into the street and walks off.

The end of the video shows what appears to be the Uber driver getting out of his car to find it damaged.

It is unclear when the video was filmed, but it is believed to have been taken at some point over the weekend – with the hotel in the footage displaying Christmas decorations in the background.

It is understood to have been circulated among a number of private hire drivers in disgust at the woman’s behaviour. 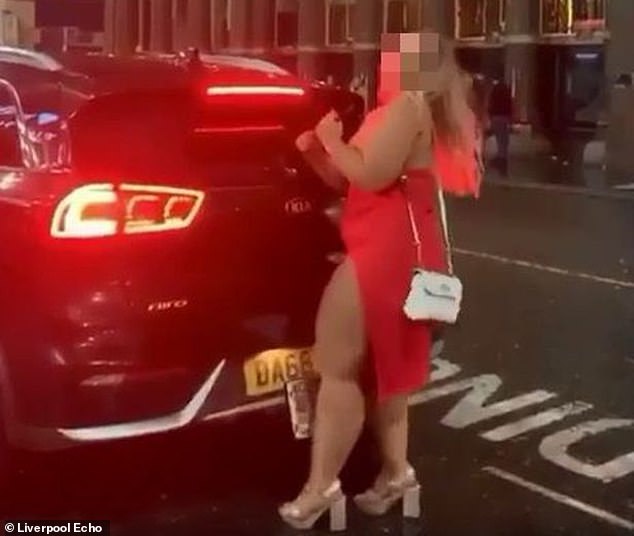 The woman in the red dress then lunges towards the car, operating as an Uber, and grapples with the windscreen wiper 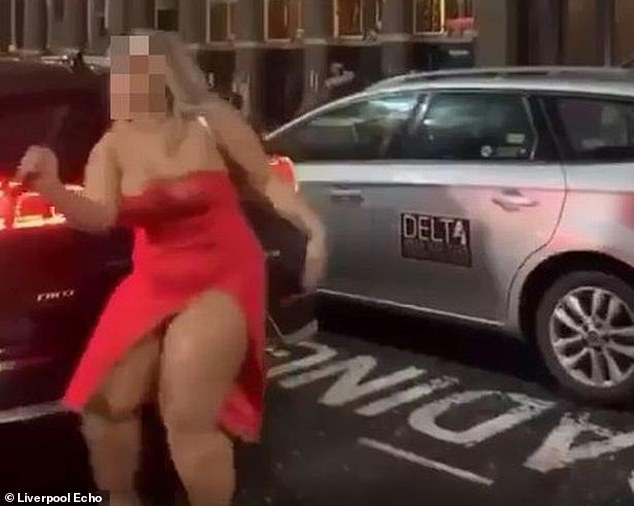 One private hire driver, who did not wish to be named, contacted the Liverpool Echo to share the video, claiming it is typical of the kind of abuse drivers often have to put up with on nights out.

He said: ‘Here is something you should see, absolute disgrace of a ‘lady’ damaging a private hire drivers car.

‘He’s out there trying to make a living and this happens? Disgusting. Poor driver will have a bill to pay.’

He added: ‘It’s getting harder and harder to make your wage being a private hire driver. We don’t need mindless yobs causing damage to our cars.. Most of us take pride in our cars. Sickening really.’

It is unclear at this point whether the incident was reported to Merseyside Police.