A Kmart beauty gadget is raising eyebrows for its resemblance to something far more risqué.

The shopper’s post drew in hundreds of comments from Facebook users who joked they had to ‘look twice’ at the electric hair remover before realising what it actually was.

Shoppers have been sent into a spin over Kmart’s mini hair remover many thought looks just like an adult toy. ‘I had to do a double take,’ one woman said online

‘Well, I bought it! Used it and loved it! It works great!’ the woman wrote in the post with a photo of the gadget in its box. 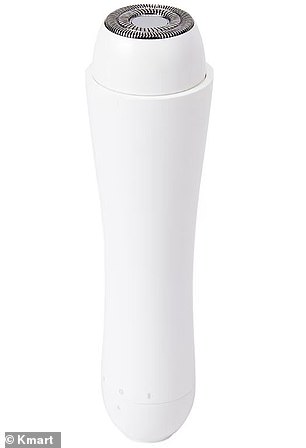 Once the cap is removed, the hair remover’s blades are exposed making its use more clear but some still found its phallic shape amusing

The photo was inundated with amused responses from members in hysterics and who thought Kmart had started stocking some surprising items.

‘I thought it was another kind of device that removes tension and frisky build up. Not hair,’ one woman joked.

‘I scrolled too fast, got excited. Thought Kmart got some good stock in,’ laughed a second.

‘I had a dirty mind there for min until read it properly,’ a third wrote and a forth agreed: ‘Definitely something more satisfying than hair removal’.

Once the cap is removed, the hair remover’s blades are exposed making its use more clear but some still found its phallic shape amusing.

One shopper said they would struggle to take the hair remover through the register with a ‘straight face’ and another recommended purchasing it through the self-serve checkout to avoid embarrassment.

‘Does it vibrate?,’ someone asked while another quipped: ‘Can it also be used for other things?! Asking for a friend’.