Short burst of exercise as good as workout in prolonging life

Just an hour of daily exercise in short bursts could slash your risk of dying prematurely, a new study says.

The study from Duke University School of Medicine in North Carolina found you can cut your risk of dying young by 57 per cent when you an hour of exercise each day, cut up into short, 10 minute increments.

Those who crammed in an hour and 40 minutes of exercise each day saw their risk cut by 75 per cent.

The results show a brisk 10 minute walk was as effective as a sustained exercise session in reducing the risk of death.

People are bombarded with advice on how much exercise they should do to combat the ill health effects of a sedentary lifestyle.

For instance, the NHS recommends adults should be active daily and do at least two and half hours of moderate aerobic activity, such as cycling or brisk walking, every week.

And this should be combined with strength exercises that work all the major muscles two or three times a week.

Scientists at Duke University School of Medicine in North Carolina, however, have found that bursts of activity of less than ten minutes over the course of a day were as good in reducing the risk of death and disease.

Prof Kraus and colleagues from the National Cancer Institute analysed data from 4,840 people aged over 40 who participated in the National Health and Nutrition Examination Survey between 2003 and 2006.

Participants wore accelerators to quantify their physical activity and exertion. Using a national database, the researchers determined that in 2011, 4,140 participants were still alive.

They found that those who got less than 20 minutes of moderate or vigorous activity each day had the highest risk of death.

However, those who got an hour of exercise each day cut their risk of death by 57 per cent – more than half.

Plus, getting at least an hour and 40 minutes of moderate or vigorous activity per day cut risk of death by 76 per cent, they reported. The study was published in the Journal of the American Heart Association. 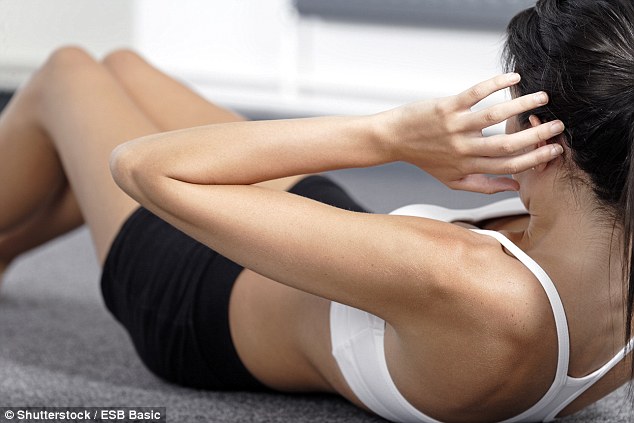 Advice to live by

Distinguished professor Dr William Kraus said: ‘For about 30 years, guidelines have suggested that moderate-to-vigorous activity could provide health benefits, but only if you sustained the activity for 10 minutes or more.

‘That flies in the face of public health recommendations, like taking the stairs instead of the elevator, and parking farther from your destination.

‘Those don’t take 10 minutes, so why were they recommended?’

The study found even brief trips up and down stairs would count toward accumulated exercise minutes and reducing health risks, as long as the intensity reached a moderate or vigorous level.

‘Moderate exertion’ was defined as brisk walking at such pace that ‘to carry a conversation’ would be difficult.

Increasing that to a jog would be classed as vigorous exercise for the majority of people, he added.

The findings are good news for most Americans, who typically get their moderate or vigorous exercise in short bouts, Kraus added.

Current guidelines by the US Department of Health and Human Services in 2008 recommend at least two and half hours of moderate exercise or an hour and 15 minutes of vigorous activity per week – ideally spread out over several days, but updated guidelines are expected to be released later this year.

The most dramatic improvements in the overall risk for death and disease can occur with a relatively small amount of effort, and the more you do, the better the benefits, Kraus said.