Should landlords avoid buying older homes due to EPC rules?

At present, all rental properties in England and Wales need to have an EPC of at least E in order to be let, unless they are exempt.

EPC is a rating scheme which bands properties between A and G, with an A rating being the most energy efficient and G the least efficient.

However, in line with its ambition to reach net zero carbon emissions by 2050, the Government is considering upping this requirement to a C rating for all new tenancies by 2025, and for all existing tenancies by 2028.

The EPC changes form part of the Minimum Energy Performance of Buildings Bill currently making its way through parliament.

Although the bill has a long way to go before becoming law and could either be amended or rejected, it is clear that many landlords are already hedging their bets, judging by Hamptons’ analysis.

It said that while some landlords were buying older homes that had been renovated to improve their EPC, investors had largely been purchasing newer homes, particularly flats, built within the last decade.

These newer properties typically carry much better EPC ratings, with almost all awarded a B or C. 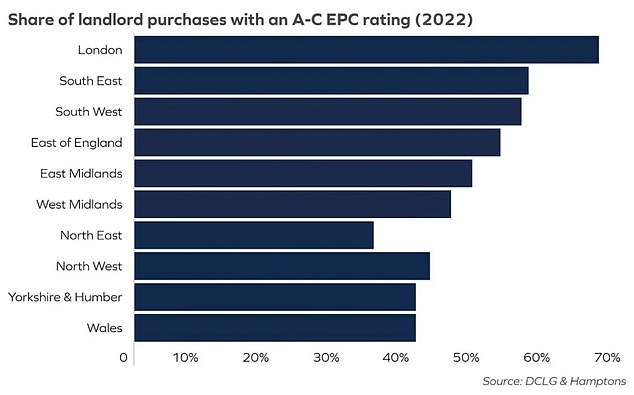 London’s landlords tend to buy the most energy-efficient buy-to-lets anywhere in England and Wales, due to a proliferation of new-build flats

Lucy Pendleton, property expert at independent estate agents James Pendleton, said: ‘Incoming changes to EPC rules are clearly on some landlords’ radars and, as their expectations crystallise into legislation, you can expect this to have an increasing influence on buy-to-let shopping habits.’

London’s landlords tended to buy the most energy efficient buy-to-lets anywhere in England and Wales, with two-thirds of new purchases made this year having an EPC rating of C or above.

Further North, investors were more likely to buy terraced housing stock, which is higher-yielding but older and less energy efficient.

Just one third of investors in the North East of England bought a buy-to-let with an EPC rating of C or above, according to Hamptons.

Whilst the proposed EPC changes may be well intentioned, the costs involved in retrofitting the UK’s ageing housing stock will be significant.

The latest English Housing Survey suggested that the average cost of bringing a property with an EPC D up to a C would be £6,472.

However, without further clarity or legislation from the Government on the matter, it may be premature for buy-to-let investors to be changing their habits.

Some experts have said the EPC rating requirements are unlikely to be made law as the repercussions for existing property owners would be too great.

Rob Dix, co-founder of the property forum, Property Hub says: ‘I think it’s unlikely the proposal will be implemented in its current form, it’ll involve far too many properties, maybe a few million, falling out of use and being un-rentable.

‘I feel there will either be a requirement to demonstrate it can’t economically be done, or that the proposals will change to make it easier to hit the mark.’

Dix said that whilst investors should consider how much it would cost to bring a property up to an EPC C rating, they should not necessarily rule older ones out altogether.

‘The direction of travel is clear,’ he adds. ‘If you’re buying a property that’s older and inefficient, it’s worth factoring in the work needed to bring it up to scratch.

‘We may well see a price gap open up, but I think this is only likely to happen at the extremes – those at the lower end of the EPC scale as opposed to the highest – with those at D being acceptable.’

The private rental sector accounts for roughly 4.4million households in England alone, according to Government figures; around 19 per cent of total housing stock.

The remainder is made up of 15.5million owner occupiers and 4million households in the social rented sector.

Were EPC changes to go from being a possibility to a reality, this would have a knock-on effect on the wider UK property market. 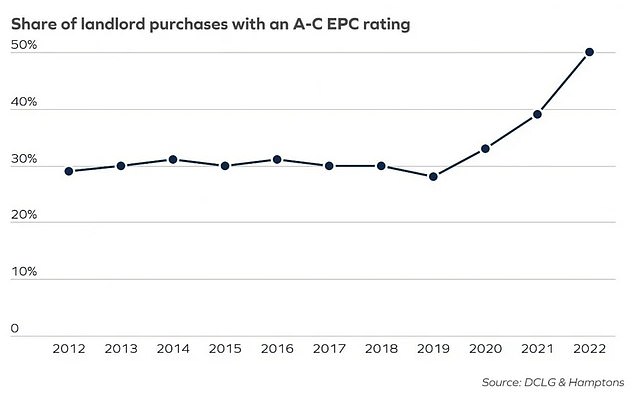 There has been a shift towards investors purchasing homes built within the last decade, according to Hamptons. These properties typically carry much better EPC ratings

Pendleton said: ‘When it comes to making the grade on energy efficiency, where more fundamental improvements are required, landlords are either going to give these properties a wider berth or insist on a hefty discount.

‘This is why, even though these new rules would be aimed at landlords, ordinary vendors will start to feel the pressure too.

‘Those selling to landlords will need to improve their properties in advance of a sale, for fear of narrowing their pool of prospective buyers, particularly in areas flooded with rentals.

‘Although the direction of travel favours more modern and greener properties, don’t expect to see too much of a price gap forming between the efficiency “haves” and “have-nots” just yet.

‘New builds may be a significant chunk of many buy-to-let portfolios but period properties will retain a spot in buyers’ hearts.’