Should the Western world trust a tyrant who has murdered North Koreans in their thousands?

When he was locked in crucial talks with the Soviet Union at the end of the Cold War, Ronald Reagan liked to rely on a favourite motto: ‘Trust, but verify.’

Today, in the wake of North Korean president Kim Jong-un’s extraordinary peace overtures, the Western world is being asked to trust a tyrant who has murdered his people in their thousands.

And right now, we have no way to verify whether he is acting in good faith.

It is, after all, only a few months since Kim’s reckless missile tests, which included firing one rocket capable of bearing a military payload over Japan and into the sea on the other side.

Whatever Kim Jong-un has said about peace this week, he has no intention of giving up power now

That reckless act brought us as close to a new Korean War as we have been for some time.

Such relentless belligerence makes his sudden grinning overtures to South Korea yesterday all the most astonishing. The hand-holding, the warm speeches, the language of peace, were all intended to dazzle us. But we cannot afford to be naive.

Yet if it is impossible to trust Kim, we should at least attempt to understand his aims. That will help us gauge whether this rapprochement between North and South Korea – and what is claimed to be the end of a conflict that goes back to 1950 – is more than superficial.

The enmity that has riven the Korean peninsula dates to the end of the Second World War, when America and the Soviet Union agreed to split control of the former Japanese colony.

That quickly led to a power grab by North Korea, which invaded the South. American troops led the UN fightback and, though the war ended in 1953, no peace treaty was officially signed.

Since then, North Korea has become ever more isolated, as the Kim family tightened their grip as dictators. Whatever Kim Jong-un said about peace this week, he has no intention of giving up power now.

His grandfather, Kim Il-sung, and his father, Kim Jong-il, dominated their people, but the latest in the dynasty has shown himself more ruthless – and, some would say, dangerous – than either. 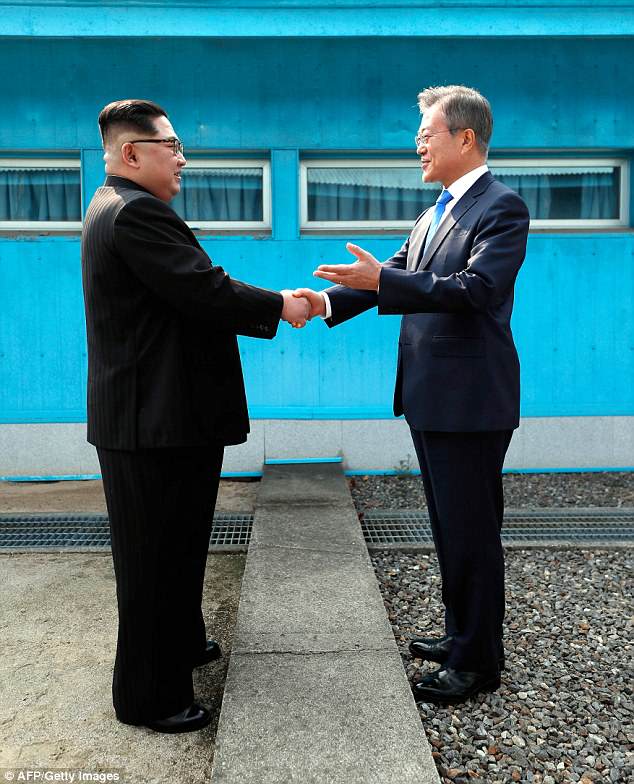 Family rivals have been brutally disposed of. His uncle was savagely executed. He had one cousin burnt alive with a flame thrower, according to South Korean reports. His half-brother, Kim Jong-nam, was assassinated with a nerve agent in February last year.

Many in the West would say we should not deal with such a man, and that any attempt at diplomacy would be immoral. Yet there are historical precedents which suggest otherwise. In 1972, US President Richard Nixon amazed the world by opening diplomatic discussions with China, whose leader Mao Tse-tung was responsible for at least 60million deaths.

Mao was a monster, but by negotiating with him Nixon was able to lay the groundwork for an end to the Vietnam War, and usher in economic changes in China that eventually saw the introduction of capitalism there.

Today, President Donald Trump regards Nixon as a role model, a president who was willing to think the unthinkable. And like Nixon, Trump finds it easier than a Democratic president might to engage with Communists, because he will not be suspected of naive Left-leaning sympathies.

There’s little doubt that Trump’s bombastic dealings with North Korea in recent months have had a part to play in this week’s events.

His brand of ‘diplomacy’ might have been comical if it were not so inflammatory. His outbursts on Twitter, dubbing Kim the ‘little rocket man’, used the language of the playground. But if there is one thing that unsettles a lunatic (Kim), it’s being confronted by an even more powerful lunatic (Trump). 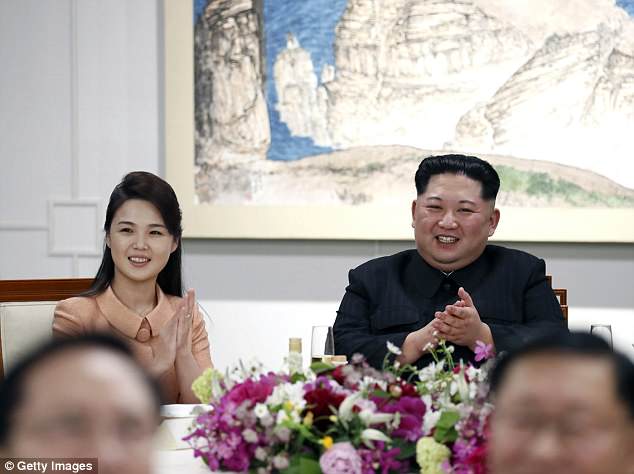 The US President’s rationale was that calmly reasoned rhetoric had got his predecessors in the White House precisely nowhere with Pyongyang. The only way of getting through, he felt, was to stick a megaphone against his opponent’s ear, and shout.

After months of knockabout threats on both sides, Trump suddenly announced last month that he would be willing to meet Kim in May or June to discuss ‘de-nuking’ the Korean peninsula.

That was not the only indication that change was afoot. Mike Pompeo, at the time CIA director, made a secret visit to North Korea over the Easter weekend when he met Kim, a few days after the North Korean leader visited China for talks.

So while yesterday’s startling announcement was a genuine surprise, there have certainly been clues it was becoming a possibility.

In the short term, the reduction of tension in the region must be a good thing.

The Japanese will be watching with concern, however, because both North and South Korea view some of Japan’s islands as disputed territory and might wish to reclaim them. 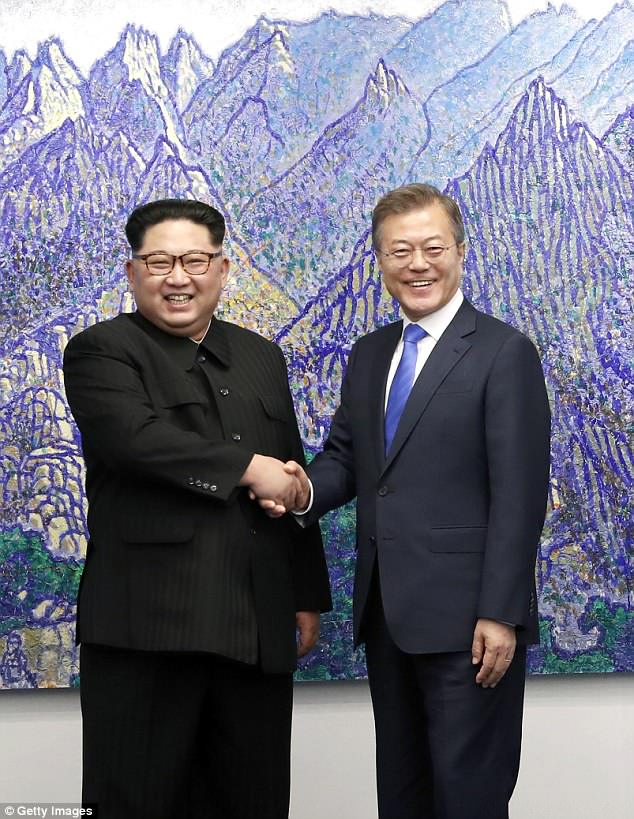 Despite the smiles, we cannot afford to be naive about Kim’s rule under which unrelenting hardship and constant conditions of near-starvation help subdue the populace

The Americans have worries, too. Like Trump, the Korean leaders talked about ‘denuclearisation’ of the peninsula. But that would also mean the removal of any nuclear weapons the US may have in the region, or even America being asked to dismantle its military bases in the South altogether.

And while Kim might be willing to allow American inspectors in to check that work at his known nuclear facilities has been shut down, it’s ludicrous to suppose he would welcome US oversight across his entire, vast military machine.

As long as some of his Army, comprising more than one million troops, is unseen, wecannot be certain that he is not hiding another atomic weapons programme, as was the case after a similar deal was struck in 1994.

And what about the question of reuniting the two nations, as we saw with East and West Germany in 1990.

The South Koreans want reunification – but not yet. They could certainly never accept Kim as ruler of both countries. And though they are a wealthy nation, the cost of absorbing the destitute North could be economically crippling.

Before the two halves of the peninsula are joined up, the South will want to see the establishment of a successful capitalist economy in the North. Can Kim accept an opening up of his backward nation to Western influences and, God forbid, the internet – which would allow his people to understand for the first time how appallingly they are repressed?

At present, the unrelenting hardship and constant conditions of near-starvation help keep Kim Jong-un’s populace under control. And while, after this week’s grand gesture, he will hope to see Western sanctions on his regime lifted, that doesn’t mean he plans to make his people’s lives easier.

The West should make an offer to lift sanctions in return for a cast-iron promise to stop his nuclear programme. (In fact, his reckless nuclear testing has made it unsafe for him to detonate another H-bomb at his northern underground test site because it could collapse.)

If he agrees, then his regime will be allowed to survive – however horrific that may be for his people.

What he will want to do is welcome President Trump to his capital with a glorious cultural and military spectacle. The American leader will be love-bombed.

Huge cheering crowds will greet him, just as China’s Chairman Mao made sure Richard Nixon was treated like a megastar. We can trust Kim Jong-un to do that much. The question is, can we trust him to keep the peace?

Mark Almond is the director of the Crisis Research Institute, Oxford