Should you lock in to a mortgage before the rates leap?

Homeowners yet to lock into a fixed rate mortgage are being urged to do so ahead of a possible base rate rise next month.

A slowdown in inflation – from 2.7 per cent to 2.5 per cent – may well persuade the Bank of England to delay an increase in the rate from 0.5 per cent.

When the rate rises it will inevitably push up home loan costs for homeowners who have variable rate mortgages. But those with fixed-rate loans will not be impacted and their monthly payments will remain the same.

Looming rises: When base rate rises it will inevitably push up home loan costs for homeowners

Ray Boulger is mortgage expert at broker John Charcol. He believes that for most borrowers, the rate protection offered by a fixed-rate loan cannot be bettered.

He says: ‘The key question for most homeowners is not whether to fix but how long to fix for.’

Boulger points out that 85 per cent of people currently walking through John Charcol’s doors end up opting for a fixed-rate loan.

It is a view shared by David Hollingworth, a director of home loan broker London & Country Mortgages. He says: ‘Fixed rates have been the preferred option for borrowers for some time, driven by the fact that Bank base rate has been so low and fixed rates so competitively priced.

‘Their popularity has only been boosted by the anticipation of an increase in base rate. Many borrowers on a variable rate mortgage are now reviewing how well placed they are to deal with a hike in their mortgage payments and are as a result running for the rate protection offered by a fixed-rate loan.’

WHICH FIXED RATE PERIOD SHOULD I CHOOSE?

Data issued in recent days indicates that the popularity of five-year fixed-rate loans among homeowners looking to remortgage is waning.

Although such mortgages remain the most sought-after – accounting for nearly four in ten remortgages – two-year fixes are gaining in popularity. 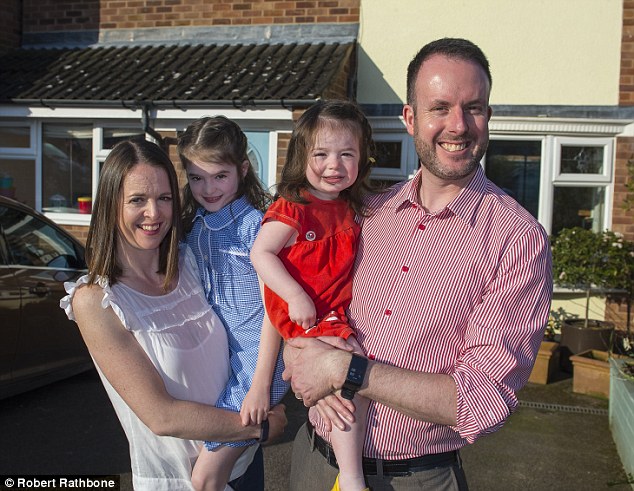 ‘Reassuring’: Jamie and Helen Bradford, with children Evie and Martha, like the security of a five-year fix

This is a result of two factors – price and flexibility. The cheapest two-year fixes are currently priced at 1.29 per cent. This compares with equivalent – and more expensive – rates for three and five-year fixes of 1.62 per cent and 1.83 per cent respectively. So on a £150,000 traditional capital repayment mortgage set up over 25 years, the monthly loan costs would work out at £585, £608 and £623 respectively.

The shorter two-year fix also offers homeowners with initial high borrowings – compared to the value of their home – the opportunity to remortgage relatively quickly in the future.

When they do so, they should have paid down a slice of their borrowing, thereby ensuring they qualify for a more competitive rate because of a lower loan-to-value.

The more equity in your home, the better the loan rate you will be able to lock into.

Despite the attractions of short- term fixes, most experts believe those looking to remortgage should opt for a five-year fix, especially if they are not looking to move in the near future.

This is exactly what Jamie Bradford is doing. He has just secured a five-year fix with HSBC Bank, priced at 1.94 per cent. Although it is a little more expensive than the two-year 1.79 per cent fixed rate deal he was on previously with West Bromwich Building Society, he is delighted that he knows what his mortgage payments are going to be until 2023.

Jamie, 40, is an education manager at De Montfort University in Leicester. He is married to Helen, 36, a public relations manager for a dog accessory company. They have two children, six-year-old Evie and Martha, two, and live just outside Loughborough in a four bedroom semi-detached 1970s house.

Jamie says: ‘This is the third remortgage we have done. I view our mortgage in the same way as I see any other household bill such as gas or electricity. I want best value for money. Although my monthly mortgage payment will be £14 higher when the HSBC deal kicks in next month, as a family we have five years of knowing exactly what our biggest household bill is going to cost us. That is reassuring and allows us to plan for the future.’

The Bradfords’ remortgage was arranged by London & Country.

Remortgaging on to a fixed rate is straightforward, although it is best done through a mortgage broker who can find the most appropriate deal – taking into account not just rates but fees and flexibility. The rate you are able to lock into will depend on the amount of equity in your home – and the period of fix you are most comfortable with.

The table below gives an indication of the rates you can lock in to – and the monthly repayments you would pay on an average £150,000 loan over both 20 and 25 years. All the deals are free of legal charges but do have arrangement fees – with the notable exception of the Skipton Building Society product.

No one should opt for a fixed rate if they think they will not last the course. Most of these loans impose early redemption penalties.

For example, Monmouthshire Building Society imposes a three per cent charge on anyone wishing to get out of its two-year 1.34 per cent fix.

Coventry Building Society has a two-year fix priced at 2.09 per cent – on loan to values up to 65 per cent – which has no early redemption charge. Most fixed rate loans allow a limited amount of overpayment – without triggering a penalty.

Borrowers who require the ultimate in protection could consider a ten-year fixed rate loan. But they are pricier than five-year loans and most carry stiff early redemption penalties. As a result, they represent a small part of the market.

Yet there are notable exceptions. For example, Coventry Building Society has a ten-year fix priced at 2.49 per cent which is available on loans-to-value up to 50 per cent.

Early redemption penalties apply for five years – five per cent in the first two, three per cent in the next three. Then, borrowers can either stick at the same 2.49 per cent rate or twist and remortgage again. The loan costs £999 to arrange. TSB also has ten-year fixes with just a five-year tie-in.

Also there are some competitively priced variable rate loans which borrowers should not ignore. For example, Nationwide Building Society offers a two-year tracker rate loan, set at 0.69 per cent above Bank base rate. This gives a current payment rate of 1.19 per cent – 1.44 per cent if base rate rises to 0.75 per cent. Given it has no redemption charges, borrowers can jump ship if the base rate continues rising.

Last week, Yorkshire Building Society launched a two-year discounted rate loan at 0.97 per cent, available to anyone borrowing up to 65 per cent loan-to-value.