Bill Cosby accusers erupted in shrieks and cries while hugging each other in the Pennsylvania courtroom after he was convicted on three counts of aggravated sexual assault Thursday.

Meanwhile, Andrea Constand, the victim who finally saw justice served after two emotional trials into her case of being drugged and sexually assaulted by Cosby, remained stoic, and then hugged her lawyer and members of the prosecution team.

Cosby accuser Lili Bernard let out a sob as the foreperson delivered the guilty verdict on each charge.

Cosby did not react to the verdict, but instead sat sat in silence with his eyes cast down. His wife was not in court.

Judge Steven T O’Neill repeatedly called for order as the court erupted as the jury delivered its shock verdict, unanimously finding the 80-year-old Cosby guilty on all three counts of aggravated sexual assault: administering an intoxicant, rendering his victim unconscious and penetrating her without consent.

O’Neill requested everyone to respect the decorum order that has been in place throughout the trial and to keep order as the verdict was delivered.

O’Neill thanked the jury for their service, ‘for removing themselves from their families and lives.’ He told them ‘you have sacrificed much for you country and justice.’

‘I feel like I’m dreaming. Can you pinch me?’ accuser Bernard said through tears on the steps of the Montgomery County Courthouse after the jury found Cosby guilty of sexually assaulting Andrea Constand in 2004.

Bill Cosby accuser Andrea Constand (C) reacts after the guilty on all counts verdict was delivered in the sexual assault retrial at the Montgomery County Courthouse Thursday. Cosby was found guilty on all accounts after a former Temple University employee alleges that the entertainer drugged and molested her in 2004 at his home in suburban Philadelphia 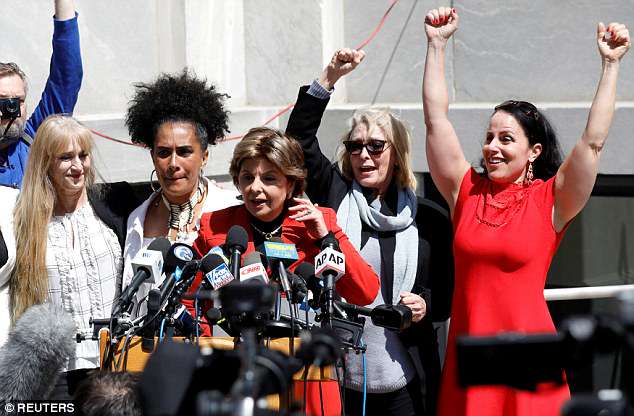 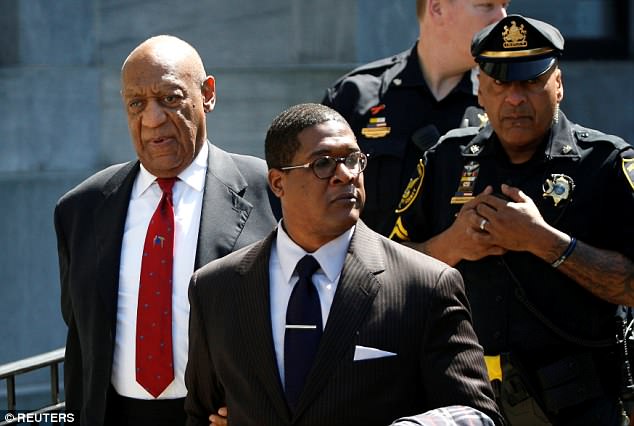 ‘This is a victory not just for Andrea Constand. Thank you so much to the jury for positioning yourself on the right side of history.’

Allred, who represented some of the Cosby accusers, read aloud statements from three of the women who testified against the disgraced comedian earlier this month.

‘Thirty-two years of nightmares and tears are over,’ said Chelan Lasha.

‘I truly hope that his long list of victims will be able to find some kind of peace,’ said Maude Lise-Lotte Lublin.

Janice Baker-Kinney said she was overwhelmed with ‘relief and gratitude.’

‘We can now move forward with our heads held high,’ she added.

‘The #MeToo movement is alive, it is well. And it is living in Montgomery County,’ said Allred.

Gloria Allred said: ‘Justice has been done! We are very thankful. It took a great deal of courage, in the beginning many were not believe.

‘Proved beyond a reasonable doubt. The jury believed women and I’m the happiest I have been about any court decision in 42 years.’

Allred added: ‘It’s been a very long journey but this is a historic result. This is her story. The story of Andrea Constand.

‘And yes the MeToo movement is alve and well and living in Montgomery County and throughout this nation and this world.’

She went onto thank Steele and his team for taking a risk for justice.

Accuser Chelan Lasha said: ‘I feel like the judicial system works. 32 years of tears and nightmares are over.’

Another accuser, Lise Lott Lublin, said: ‘I am extremely grateful that the jury was able to see past his defense attorneys lies. I truly hope his long list of victims will now be able to find some kind of peace.’

A third, Janice Baker-Kinney, said, ‘I am overwhelmed with joy relief and gratitude. Joy that finally justice has been served, relief that this toxic chain of silence is finally over.’ 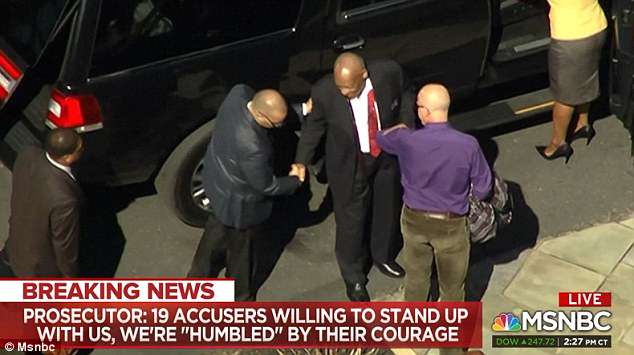 Cosby was seen returning to his million-dollar home after the guily verdict, and ordered by a judge only to leave his property for a bail hearing 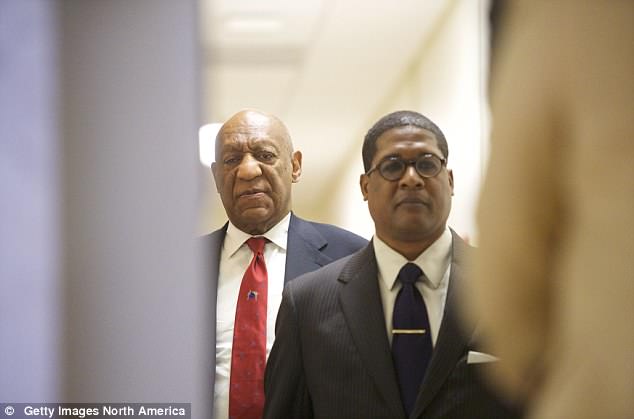 Cosby’s lawyers painted the women as home-wreckers and liars who made up their allegations in a bid for money and fame.

Allred spoke Thursday outside the suburban Philadelphia courthouse where Cosby was convicted. She says her clients are grateful to the jury for seeing past ‘his defense attorney’s lies.’

Cosby accuser Janice Baker-Kinney, who alleges he drugged and raped her in 1982, says in a statement she’s relieved ‘this toxic chain of silence has been broken’ and says the women can move forward ‘with heads held high.’

The actor now faces spending the rest of his life in prison as each count carries a sentence of up to ten years imprisonment.