Shropshire woman pretended to be police to control her ex

A jealous girlfriend who posed as a fake police officer for more than two years to control her ex-boyfriend and ban him from seeing other women has been jailed.

She made her ex believe he was subject to curfews, which restricted him from going to certain places and ‘completely ruined’ his social life.

Adderley, of Telford, Shropshire, admitted to impersonating a police officer and stalking and was jailed for nine months at Shrewsbury Crown Court today.

She was also barred from seeing her victim and told she could only use the internet on a device that could not delete internet history.

Adderley had pretended to be various officers to stop Mr Lloyd from seeing his own friends as well as other girls and threatened him with legal action if he did not comply.

She would also pretend to be her own friends and chastise him for seeing women when he tried to start up new relationships.

A court heard the former administration assistant – who lost her job on Thursday – had entered into a brief sexual relationship with Mr Lloyd in September 2014.

But he broke it off two months later at which point she told him she had previously been the victim of a crime.

She asked whether he would be willing to provide a statement on the offence, at which point she started to take on the persona of the police officer ‘Robert Hay’.

She also created two fake Facebook accounts pretending to be her own friends, and used them to repeatedly criticise him for engaging in relationships with other girls.

At one stage, when Mr Lloyd started seeing a colleague from the store he worked at, Adderley grabbed a pair of scissors and told him ‘that she would kill herself, and it would be his fault’, Shrewsbury Crown Court heard.

The next day, a fake officer told him to immediately end the relationship, before Laura herself texted him to say: ‘No one can ever love you like I love you x.’

Her former lover was left feeling ‘terrorised’, and became ‘isolated from his friends and depressed’.

He eventually went to the police in February of this year after confiding in workmates. 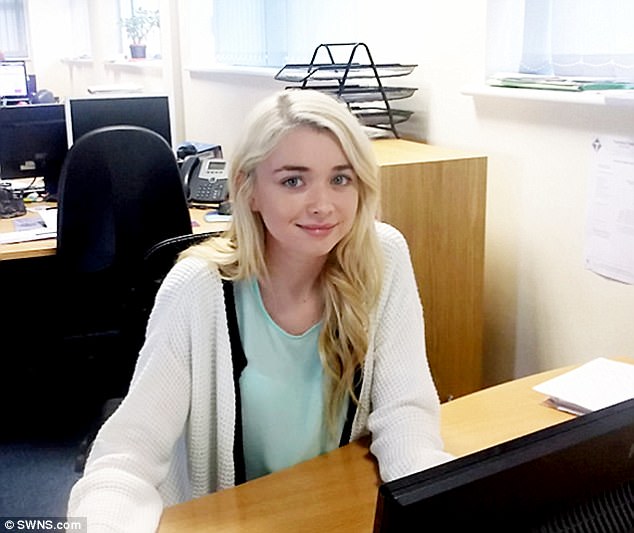 Adderley, pictured, had pretended to be various officers to stop Mr Lloyd from seeing his own friends as well as other girls and threatened him with legal action if he did not comply

Sentencing, Recorder Peter Rouch QC, said: ‘I do not know what was going through your mind in December 2014 but a that time you decided to deliberately adopt the persona of a police officer to contact Mitchell Lloyd.

‘At that time, he did not want a relationship with you. For two years you controlled Mitchell Lloyd’s life, to the extent that you told him where he could go and who he could go out with.

‘Mitchell Lloyd was told that if he did not abide by what he was being told to do that there would sanctions of around £3,000 for him to pay.

‘You took on the personas of numerous different police officers in a bid to control Mr Lloyd’s life.

‘He believed that he was being sent emails by genuine police officers, and that these were real demands that he had to follow.

‘In his victim impact statement he said that he felt pressurised, blackmailed and had no freedom for two years. He felt isolated from his friends and depressed.

‘These are serious crimes, as he could not live his life properly during the two years that you committed these offences.

‘You did that for your own benefit, whatever that may have been.’

Dafydd Roberts, prosecuting, told the court the couple met through mutual friends following a night out in Shrewsbury.

He added: ‘They were in a sexual relationship, and would occasionally meet with one another.

‘He felt uncomfortable with that, and in December 2014 said that he did not want to meet up with her again, effectively ending the relationship.

‘At that point she disclosed that she had been the victim of an offence and asked for his support.

‘He agreed, and shortly afterwards he received an email from a Robert Hay, who was supposedly a family friend and a police officer. He provided him a statement by return email. 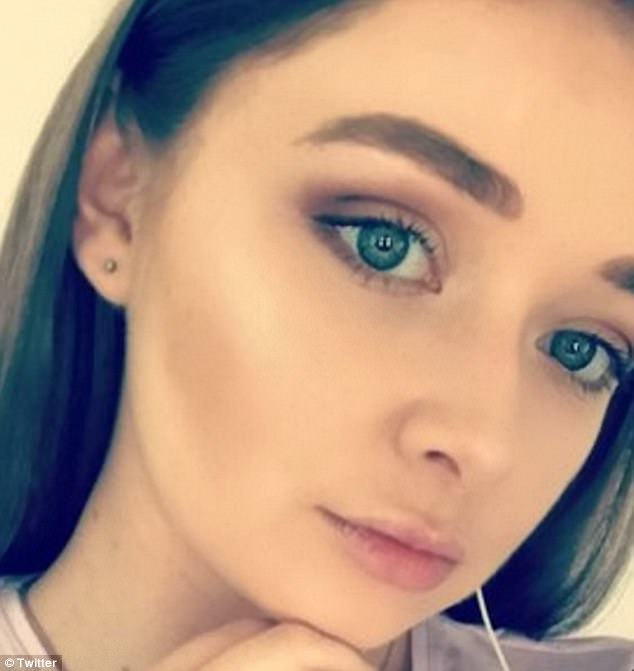 ‘But at a work Christmas party in December 2014, he walked home with a female colleague. He was attracted to her.

‘Laura Adderley was upset by this. The next day, he received an email from ‘Robert Hay’ asking why he had made Laura Adderley upset.

‘This was a pattern of behaviour that continued. It extended to the fictional Robert Hay listing a number of public houses that he could not attend.

‘He was barred from going to these places on Wednesdays, Fridays, Saturdays and Sundays, effectively ruining his social life.

‘He abided by this, believing that it was a legitimate order, due to the official wording and the formal terms used.

‘He was also banned from speaking to certain female work colleagues.

‘This police officer, who we know to be Laura Adderley, also prevented him from seeing a number of close friends, mostly women.

‘On one occasion, Mr Mitchell wanted to take his own mother and his young daughter out for lunch.

‘They attended a public house together. However, he received an email from Robert Hay saying that he was breaking an order by doing so, and was threatened with a sanction.

The court was told that after a while Mr Lloyd received an email from another police officer ‘Darren Clarke’.

The officer claimed they had taken over the case due to Robert Hay’s personal connection to Ms Adderley, and the same pattern continued.

Another fictitious person, ‘Elaine Thomas’ who was supposedly a senior police officer, then took over the case.

The police officers and a number of fake Facebook ‘friends’ continued to contact him and berate him for upsetting Adderley.

In February, he told work colleagues at the store he was working at of the restrictions that were in place and was told go to the police.

Genuine officers were immediately able to deduce that the emails were fake, and traced them back to Adderley.

Paul Smith, defending, added: ‘Perhaps the key point in mitigation other than the early plea is her age. She was 18 when the offences began back in 2014.

‘She has no previous convictions and has taken full responsibility for what she did.’

Jason Corden-Bowen, District Crown Prosecutor and Domestic Abuse Lead with West Midlands Crown Prosecution Service, said: ‘Lauren Adderley created a complicated fiction of multiple fake profiles interacting with each other to her own satisfaction and reason.

‘She used this sophisticated catfish style behaviour to completely manipulate the victim’s life, dictating when he could go out, where he could go and controlled his social interaction with other people for over two years.

‘The impact her actions had on the victim’s life cannot be understated and I would like to pay tribute to him for helping bring Adderley to justice.’