Sick thugs who skinned a wild badger and left a horrific reminder of their animal cruelty in a rural area of Essex are being hunted by police.

The RSPCA was called to a house in Writtle, on Monday, when a perfectly skinned badger pelt was found.

Investigators are looking into how the skin ended up in a secured Essex garden without a trace of the body, flesh or bones.

RSPCA inspector Adam Jones said: ‘We are very keen to find out what happened here to this poor badger as it is an offence to kill badgers.

The badger skin was found in a secured back garden. RSPCA officers believe it could have been dragged there 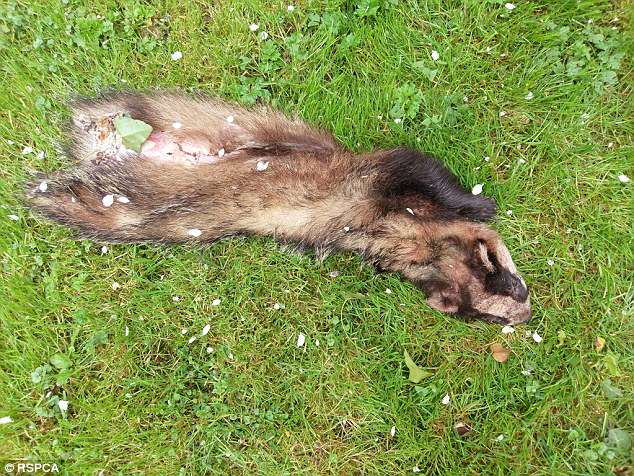 GRAPHIC CONTENT: The badger skin was found in a garden in Writtle, Essex, as the RSPCA is called in

‘This is certainly an unusual incident as the badger skin appeared to be in good condition and seemed to be cleanly taken off which I can only explain to be by human hand.

‘I don’t know why someone would go to the effort of skinning a badger and discard the skin. It is almost like an attempt at taxidermy that has gone wrong.

‘It was found very rural and I suspect its been dragged by an animal to where it was found as the garden area was secure, but because of the wounds on the badger and the condition it is in I’m suspicious as to how it died.’

Badger skins are often left by baiters who feed the animal to their dogs so they can get a taste for the animal they are trained to hunt. 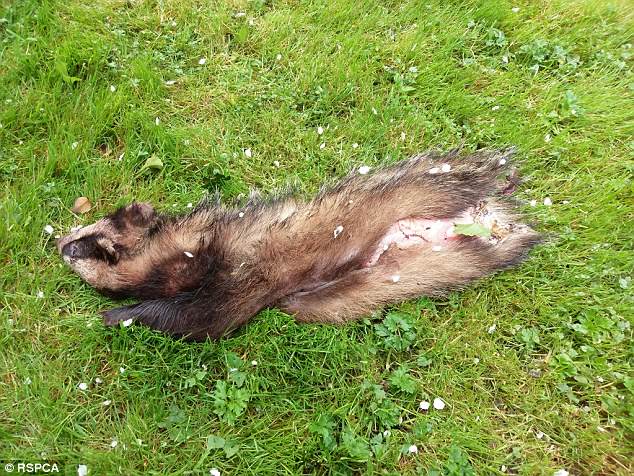 Badger baiters could be behind the discovery of a badger skin in Writtle. RSPCA officers say they are ‘suspicious’ over the the animal’s death

Badger baiting, which involves dogs dragging badgers from their dens and tearing them apart, has been illegal since 1830.

Wild animals including bats, badgers, and birds of prey were the victims of nearly 1,300 crimes last year, a charity report suggests.

But in all there were just 22 prosecutions and convictions – with wildlife charities reporting that crimes against wild animals are treated as a lower priority than other offences.

The total of 1,278 incidents in England and Wales were logged by 18 wildlife charities – there is no nationwide reporting of wildlife crimes.

Anyone with information about what happened to the badger is urged to contact the RSPCA Inspector Appeal Line on 0300 123 8018.