Travelers arriving at New York City’s airports are being greeted with new signs telling them they face restrictions if they have arrived from eight southern and western states – but they include no details about the quarantine rules.

The new digital signs advertise a travel advisory aimed at people coming in from Florida, Texas, Arizona, Arkansas, Alabama, Utah and the Carolinas, where coronavirus cases are on the rise.

The new signage went up on Thursday, the day that Andrew Cuomo, the governor of New York, joined the governors of New Jersey and Connecticut to require anyone who comes from states where COVID-19 cases are rapidly rising to isolate.

‘The list of designated states is based upon a seven day rolling average of positive tests in excess of 10%, or number of positive cases exceeding 10 per 100,000 residents,’ say the signs.

The requirements of the travel advisory do not apply to any individual passing through designated states for a limited duration, such as connecting on a plane or driving through. 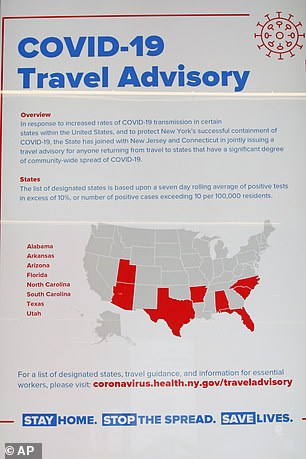 The signs warned passengers of the new travel advisory – but did not mention quarantine or the $10,000 fine

Anyone known not to be observing quarantine can be fined up to $10,000, and the New York state website features a form where offenders can be anonymously reported.

‘In New York, it’s a travel advisory, you are informed you should quarantine for 14 days,’ said Cuomo on Wednesday.

‘If you go to a hotel, hotel clerk asks how come you are not in quarantine?

‘You go to a business meeting, someone says, aren’t you supposed to be in quarantine?

‘You get stopped by a police officer who says, you are driving a car from Florida, weren’t you supposed to be quarantine for 14 days?

‘Any of those mechanisms you can be detected as violating your quarantine.

‘If you are violating your quarantine, you can be subject to a judicial order and mandatory quarantine. You could have to pay the costs of quarantine. There are also fines that go along with violating the quarantine. $2,000 for the first violation, $5,000 for the second, up to $10,000 if you cause harm.’

Essential workers are exempt from the ruling, but must take precautions and have a COVID-19 test as soon as possible, the state says.

A total of 124,410 Americans have been killed by the virus as of midnight Thursday, up from a death toll of 121,979 recorded just 24 hours earlier.

The grim new toll means that more than double the number of U.S. citizens have died from COVID-19 than perished in the Vietnam war or the First World War.

Infections rose across the U.S. by at least 39,818 on Thursday, marking the worst day since the virus first hit the country in January.

Infections in several states that rushed to ease lockdowns early on have surged with Texas, Florida and Arizona among the states to set single-day case records in the last week.

With fears mounting that the nation is headed for a second wave of the deadly outbreak, governors of several states announced they were putting the brakes on their reopening plans. 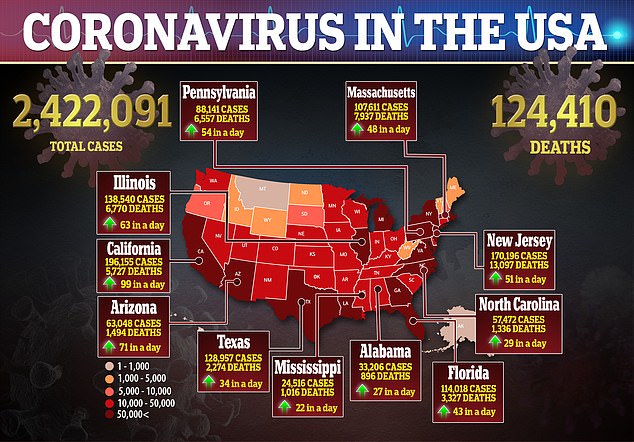 Coronavirus is surging in states across the south and west, according to data Friday 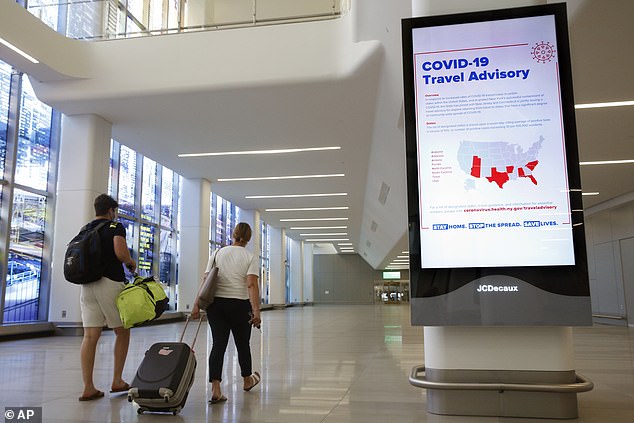 Texas, New Mexico, Arizona and Florida all pledged to pause their re-openings as the pandemic has shifted to the west and south of America, while the former virus epicenter New York continues to see cases and deaths decline.

Texas recorded yet another bleak milestone Thursday, as it beat its own record for new daily infections for the third day running, reaching almost 6,000 cases.

More than 17,000 people have tested positive for the virus in the last three days alone and its rolling average has skyrocketed by 340 per cent since Memorial Day.

Fears are growing that the state’s hospitals will buckle under the strain, leading the largest pediatric hospital in the country to start treating adult patients in Houston to help free up beds.

Meanwhile, the Texas Medical Center in Houston announced it had filled all of its 1,330 ICU beds on Thursday, with 374 taken up by coronavirus patients.

With the south and west witnessing surges in cases as a sign the pandemic is far from over for America, the White House coronavirus task force is planning to hold its first news briefing in almost two months on Friday. 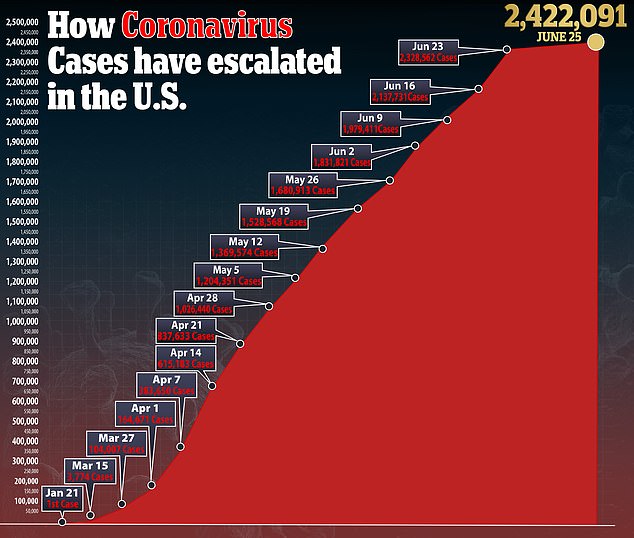 Coronavirus cases in the United States are continuing to rise, even as states push to reopen