Silence from bosses over share issues for ordinary investors

The Mail on Sunday’s campaign to ensure retail investors are not discriminated against when successful companies float on the London Stock Exchange is gathering pace.

Launched this month, our Fair Play For Small Investors campaign is rapidly drawing widespread support – from bosses of listed companies through to the heads of the country’s leading share trading and wealth platforms.

Our goal is simple: to ensure when companies list their shares in the UK through an initial public offering (IPO), they are offered to both retail and institutional investors.

Manna from heaven: Our campaign seeks to ensure retail investors are not discriminated against when successful companies float on the London Stock Exchange

Currently, retail investors are frequently excluded from participating, meaning they have to wait for the shares to start trading before they can buy into the new listed company. Often – but not always – it results in private investors having to pay over the odds for a shareholding because IPO shares usually surge in price in early trading. It also means retail investors unfairly lose out on the quick profits that big City institutions can make by trading shares bought cheaply in an IPO.

Research by technology company PrimaryBid shows that of the 15 biggest stock market listings this year – where retail investors were excluded – 11 had share prices opening ahead of their listing price.

In other words, retail investors keen to get a slice of the action were forced to pay over the odds – sometimes by as much as 40 per cent in the case of both Big Technologies, known for its Buddi personal alarms, and cyber security company Darktrace.

Although the Government is looking to make IPOs more inclusive, The Mail on Sunday believes it is not being ambitious enough. We support the far more radical – and investor-friendly – idea put forward by Richard Wilson, chief executive of wealth manager Interactive Investor.

He is adamant that the Government should put in place legislation that requires ALL listing companies to set aside a slice of shares for ordinary investors. On Friday, Wilson said: ‘Retail investors are the beating heart of UK plc and have been almost completely ignored when it comes to the vast majority of IPOs. The Mail on Sunday’s Fair Play For Small Investors campaign is one we stand behind.’

Wilson’s support is not a lone one. In recent days, the chairmen of stockbroker Redmayne Bentley and a stock market-listed investment trust have both come in behind our campaign – as has the founder of share dealing platform Freetrade. Keith Loudon, Redmayne chairman, says: ‘I have no hesitation in backing The Mail on Sunday’s call for private investors to be able to buy shares in companies ahead of their listing. The solution is simple: 15 per cent of shares should be made available to private investors on the same terms as the institutions.’

Adam Dodds, founder of Freetrade, agrees. He says too many IPOs have come to market with a ‘complete disregard towards retail investors’. He adds: ‘Companies which do not include retail investors in their IPOs are showing they do not care about the breadth of their investor base. In today’s equity raising landscape, embracing retail investors is straightforward to accomplish and should be a matter of best practice.’

Dodds’ final thought is aimed at the wealthy City institutions that advise companies on how to structure IPOs. ‘It is inexcusable that ordinary investors should not be given the chance to participate in the evolution of growing British businesses, benefiting from their success in the same way that City institutions and the wealthy have done for years.’ David Harris, a non-executive director at a number of investment trusts, says it is ‘simply wrong’ that retail investors are disadvantaged. He says: ‘Over the past four years, retail investors have been excluded from more than 90 per cent of IPOs. That’s not good enough.’

He believes the big investment banks currently put too much pressure on company boards to exclude retail investors from IPOs. This pressure is applied in part, he says, because any retail offering requires detailed prospectuses to be put together. The Government is now assessing whether such documents can be made simpler, paving the way for more retail investor-inclusive IPOs. Although Harris is an advocate of greater fair play for ordinary investors, he says IPOs should not be seen as a ‘one- way street to make money’. He adds: ‘Investors should always take appropriate advice before investing in any IPO.’

For example, online food delivery company Deliveroo embraced retail investors when it completed its IPO in March. But its share price has since fallen from £3.90 at listing to around £2.70.

According to PrimaryBid, only 27 of the 75 IPOs completed this year with market capitalisations of at least £10million have embraced the retail investor. It says this is ‘shameful’.

SO WHAT ABOUT FUTURE LISTINGS?

Midas looks at three forthcoming IPOs that are retail investor friendly: cook shop group ProCook; eco-friendly energy firm Atrato Onsite Energy; and real estate investment trust Life Science. But The Mail on Sunday has been stonewalled by a number of companies about their IPO plans. 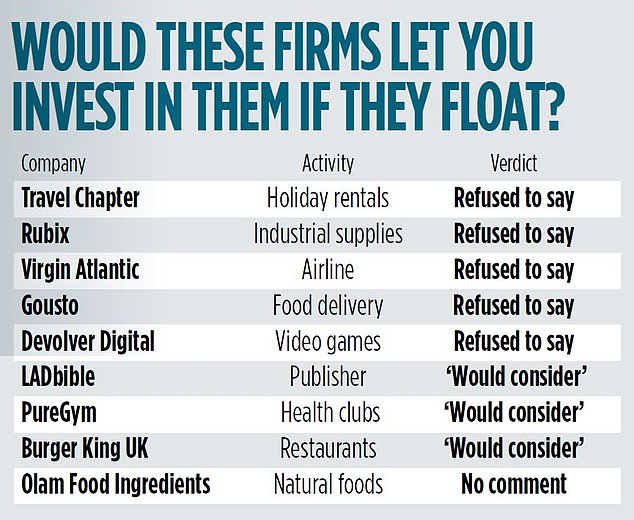 Last week, we asked companies considering IPOs whether they would allow retail investors to participate. Social media publisher LADbible said that if it were to go ahead with an IPO, ‘we would counsel the sponsor’s advice on including a retail element’. This confirms the point previously made by David Harris, namely that it is the advisers which pull all the strings over how IPOs are put together.

No-frills health club PureGym said it had yet to confirm that it would be proceeding with an IPO. Only once it had done so would it start to look at its structure – and whether retail investors and customers would be included. Private equity company Bridgepoint is owner of Burger King’s UK division which it is looking to float on the London Stock Exchange next year. Like PureGym, a Bridgepoint spokesman said the structure of any IPO would be considered once it had decided a listing was the best way forward. ‘We will of course keep you in the loop if we get to that stage,’ he added. ‘And thanks for putting a marker down – always helpful.’

In August, Olam International announced its intention to float its subsidiary business Olam Food Ingredients (a supplier of natural and sustainable foods) on both the London Stock Exchange and the Singapore Exchange. But last week, it said it ‘could not comment at this stage’ on the IPO offering.

On Friday, Anand Sambasivan, chief executive of PrimaryBid, said: ‘Individuals have only been able to participate in a third of UK IPOs this year above £10million – and in only one of the 15 largest [Deliveroo]. An initial public offering should do what it says on the tin: include the public.’ Absolutely.

Wealth manager Interactive Investor is on a mission to empower investors. Tomorrow, it will confirm it has made it much easier for its customers to vote at AGMs of companies they hold shares in.

Instead of having to opt in to use the platform’s voting service, they will now be automatically enrolled. It means customers will receive notification of upcoming company votes – and then be able to cast their vote at the press of a button. Currently, just under a fifth of Interactive’s 400,000 customers are registered to vote. Now, all will be unless they opt out of the service.

Richard Wilson, chief executive, says: ‘Everyone deserves to be given the tools to make their voice heard by UK plc. Shareholder democracy and engagement shouldn’t be inhibited by red tape or time-consuming bureaucracy.’

He adds: ‘Auto-enrolment for company pensions has had a beneficial impact on saving for retirement. We hope that by making the ability to vote online the default option for customers, it will improve shareholder engagement.’

Interactive’s move has been welcomed by Amanda Blanc, chief executive of insurer Aviva. She says: ‘We believe all shareholders should actively vote and participate in company AGMs.’

Wilson hopes his company’s move will inspire rivals to follow suit. Currently, any Hargreaves Lansdown customer who wants to attend or vote at an AGM must send it a secure message or ring its helpdesk. Where there is a vote that could have a material impact on their shareholding, Hargreaves will contact clients directly.

Currently, only around half a per cent of its clients exercise their right to vote at a company AGM.

AJ Bell adopts a similar stance to Hargreaves. It alerts customers to votes that might impact on their investment – for example, a rights issue or takeover – while processing requests to attend or vote at AGMs.