He’s been recovering from an electric bike accident for the last year, and was spotted out for dinner with a medical breathing apparatus on Friday.

But Simon Cowell, 61, appeared relaxed and at ease at the Epsom Derby on Saturday, cutting a dapper figure in a black morning suit and white waistcoat.

The music mogul shared a tender kiss with partner Lauren Silverman, 43, and was later seen puffing on a cigarette on the VIP balcony.

Day at the races: Music mogul Simon Cowell, 61, shared a kiss with partner Lauren Silverman, 43, while enjoying the Epsom Derby on Saturday

Lauren looked effortlessly chic in a white midi dress and matching fascinator as she arrived hand-in-hand with Simon.

The couple were seen heading to the racecourse’s executive lounge with their son Eric, 7, and Laura’s eldest son, Adam, 15.

Simon completed his smart ensemble with a pair of dark shades and toted a classic black top hat as he strolled through the Derby and led the event’s celebrity arrivals. 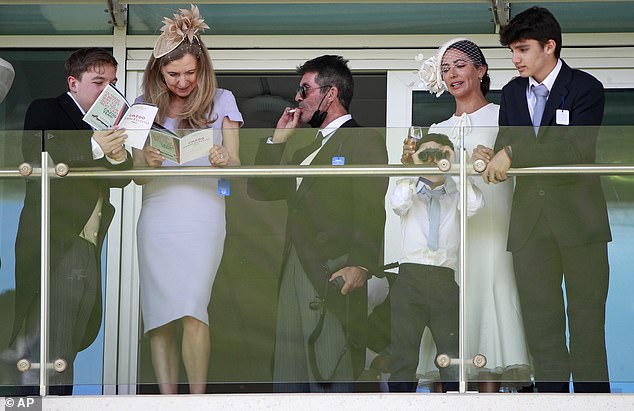 Quick smoke: While on the racecourse’s executive lounge, Simon removed his mask as he smoked a cigarette 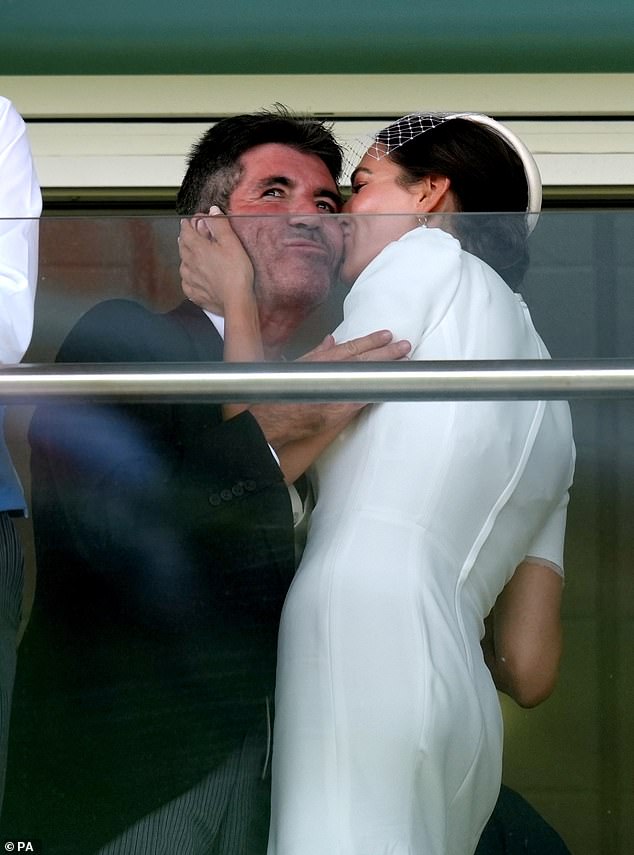 Kiss on the cheek: Lauren was seen leaning into her other half to sweetly plant a kiss on his cheek 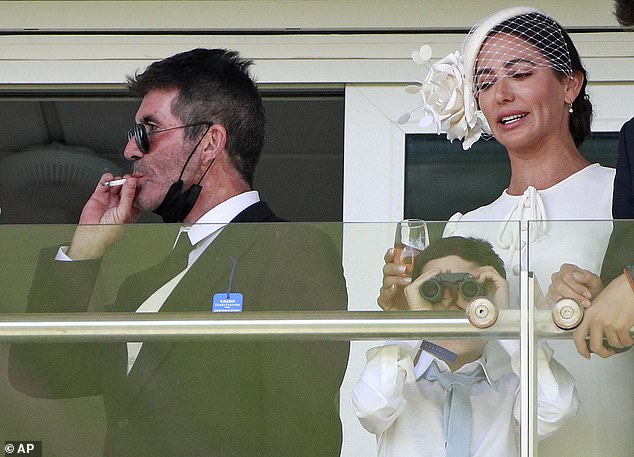 Device: Just a day prior, Simon was spotted out for dinner with a medical breathing apparatus 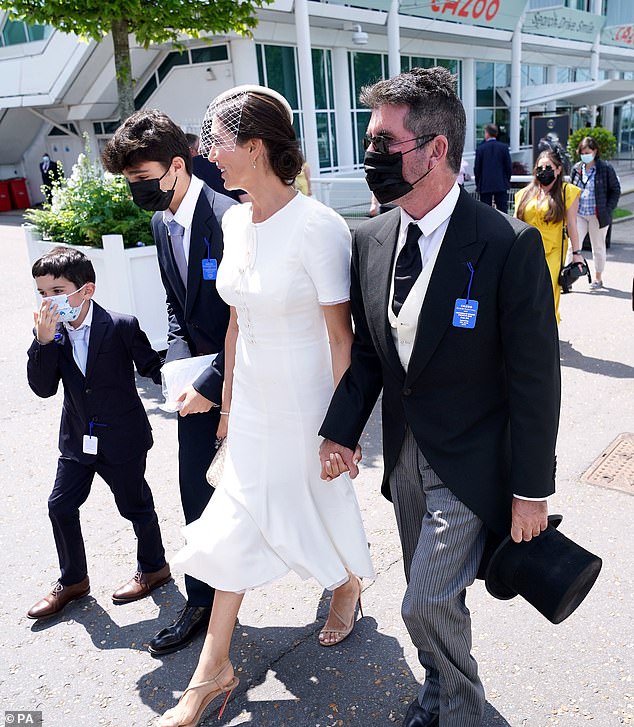 Dapper: Arriving for race day, Simon cut a dapper figure in a black morning suit and white waistcoat. Pictured with Lauren, their son Eric, seven, and her son Adam, 15,

She swept her chestnut tresses up into a low bun, which perfectly sat beneath her understated hat.

While in the VIP enclosure, Simon removed his face mask and smoked a cigarette.

He was later joined in the enclosure by Piers Morgan and his wife Celia Walden.

The former Good Morning Britain host appeared in high spirits as he lifted his glass of red wine in black aviators to pose for a couple’s photo with the music mogul. 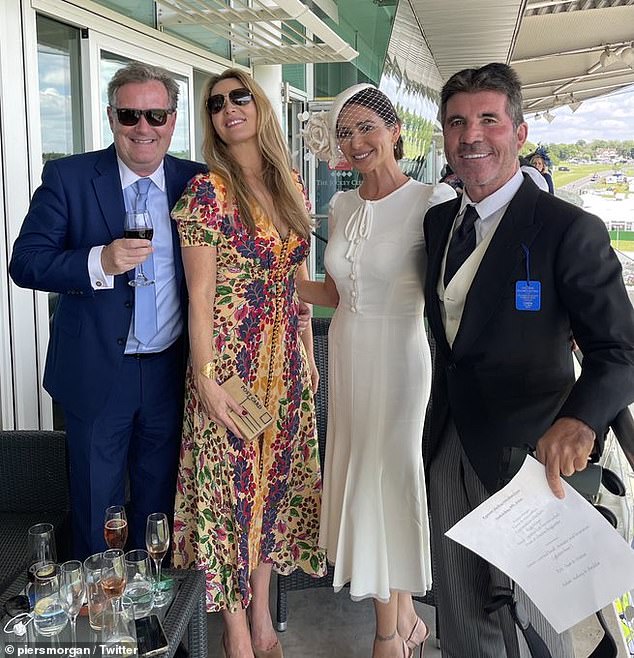 A-list pals: Simon and Lauren were joined in the VIP enclosure by Piers Morgan and his wife Celia Walden, with the group posing together for a snap 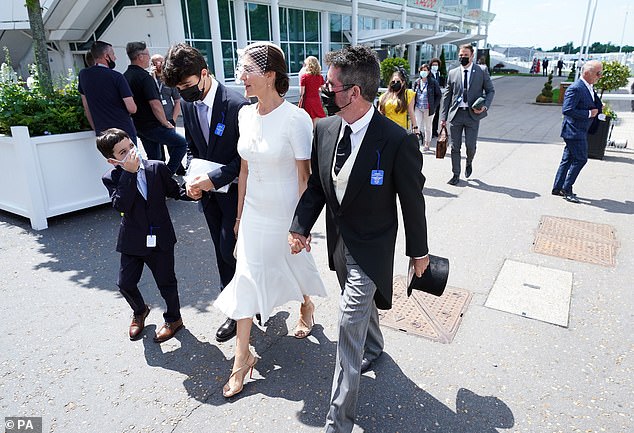 Elegant: Lauren looked effortlessly chic on the day in a white midi dress and matching fascinator as she arrived hand-in-hand with Simon

Piers opted for a blue toned ensemble in a navy suit and sky shirt and tie, while Celia donned an eye catching yellow button down dress with a purple floral pattern.

The event is usually attended by the Queen, who this year has decided to skip her trip to the Epsom Derby because she fears it won’t be the same with Covid restrictions in place, reports suggest.

Instead, the monarch, 95, will watch the famous race on television from the comfort of Windsor Castle. 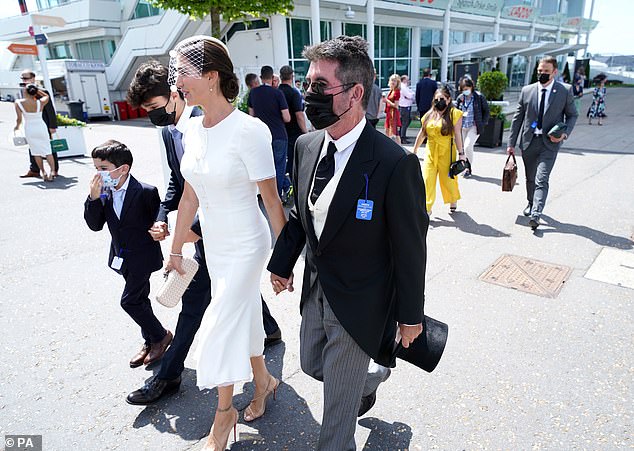 Family outing: The couple were seen heading to the racecourse’s executive lounge as one of the few stars in attendance for the historic race

Simon’s outing also comes after he was spotted out for dinner with a portable oxygen tank on Friday.

The music mogul had the medical equipment next to him alongside a packet of cigarettes, after climbing into a waiting car outside Harry’s Bar in London.

The product is often prescribed to patients in the hospital who are in need of lung expansion therapy, with a mouthpiece and goals levels designed to help deeper breath in and open up the alveoli (air sacs) in the lungs. 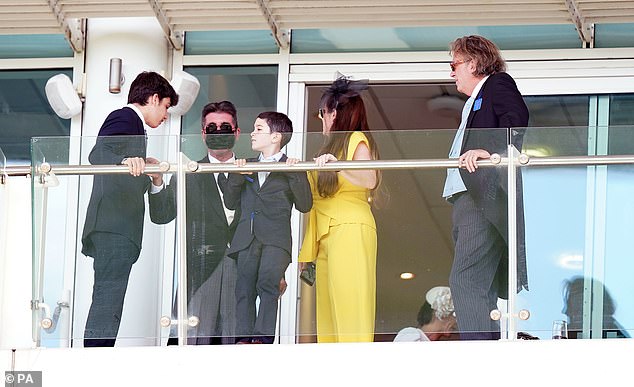 Spectators: Simon completed his smart ensemble with a pair of dark shades and toted a classic black top as he enjoyed the derby with his family and friends 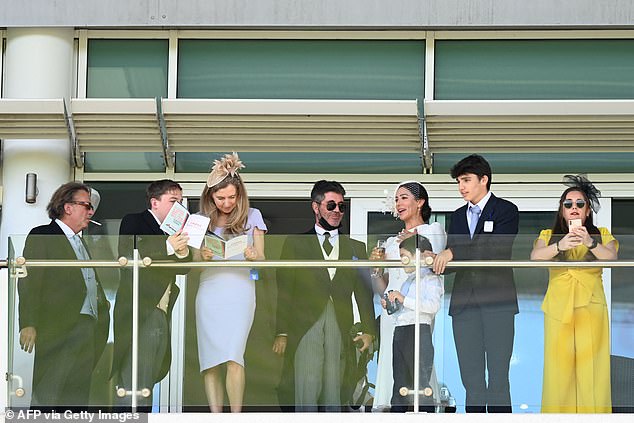 Social: He appeared relaxed and at ease as he mingled with his loved ones and other guests

A source told MailOnline: ‘Simon has been using this type of breathing equipment for some time, it’s not been prescribed as part of the rehab from his bike fall.

‘He appreciates the benefits and being a heavy smoker for a number of years it improves his air flow. He’s got no qualms about it whatsoever.’

In August, Simon was rushed to hospital to undergo six hours of surgery after injuring himself in an electric bike accident accident. 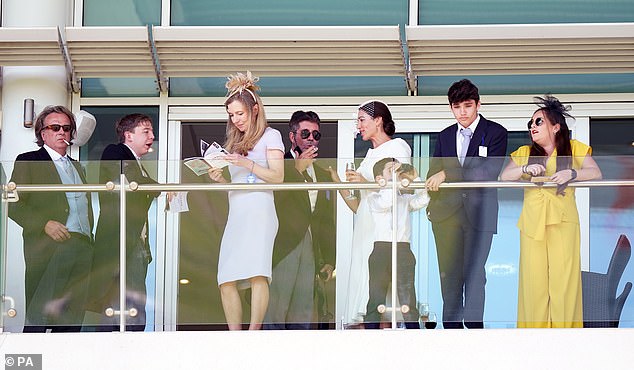 Smoke break: Simon enjoyed an opportunity for a quick smoke on the VIP enclosure 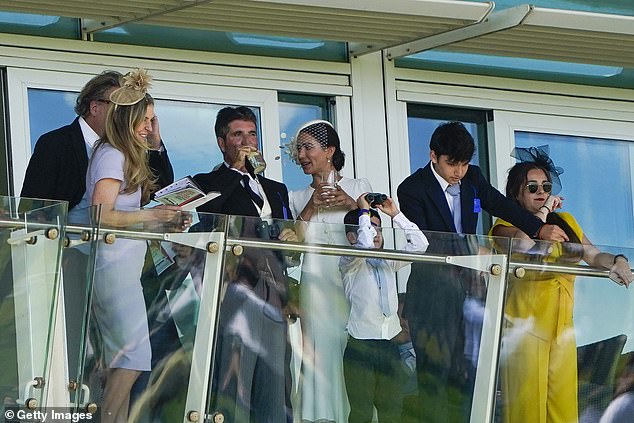 Thirsty work: Simon was also seen sipping on a cool beverage as she engaged in conversation with Lauren 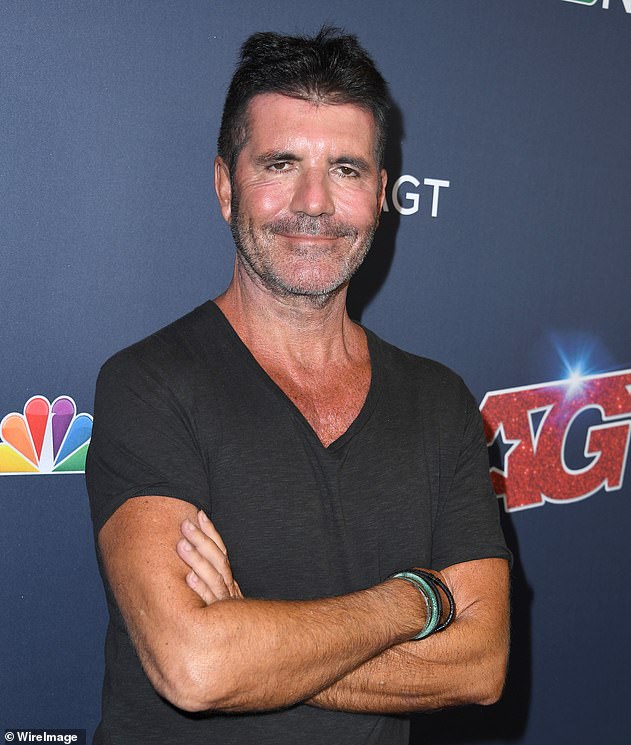 Oxygen tank: Simon’s outing at the Derby comes after he was spotted out and about with a portable oxygen tank on Friday (pictured September 2019)

But the record executive has been determined to do everything he can to ensure he makes a full recovery, including walking for several hours a day and holding business meetings at 9AM so that he no longer lives like a ‘vampire’.

Of his new fitness regime, a source told MailOnline: ‘Simon said how he hasn’t worn trainers as much as this in 20 years.

‘He feels fitter than ever before and is keeping to a normal routine rather than being on the phone until into the early hours of the morning.’ 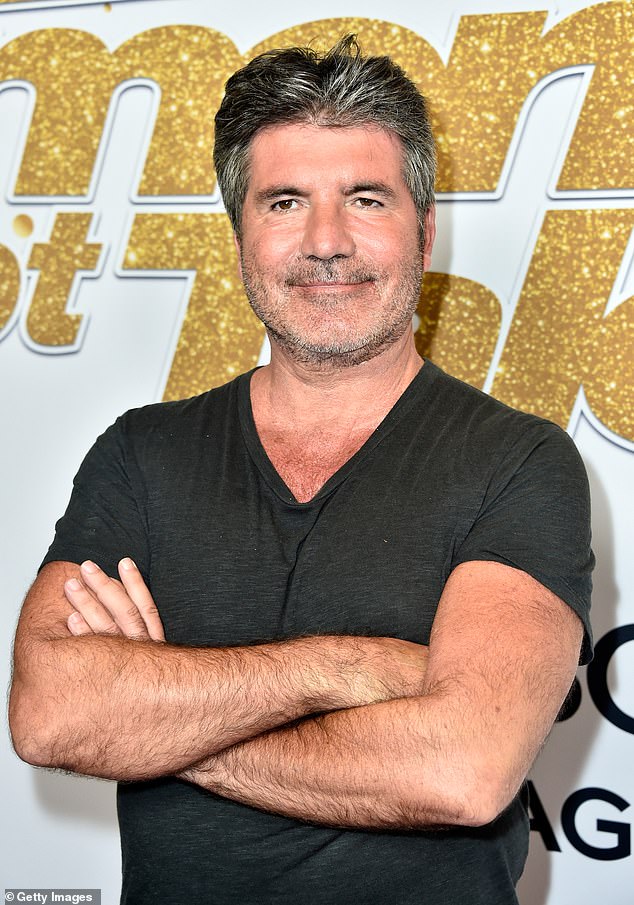 Unrelated: Sources have said that the apparatus has nothing to do with his recovery from an electric bike accident last year but that he has long used the equipment for ‘air flow’