Simon Pagenaud arrived at Indianapolis Motor Speedway this month with his job on the line and rumors swirling around Gasoline Alley that Alexander Rossi could soon replace him at Team Penske.

The Frenchman is leaving with a pair of wins, his face soon to be engraved on the Borg-Warner trophy as the Indianapolis 500 champion and an assurance from Roger Penske himself that he isn’t going anywhere.

‘Do I even have to answer that?’ Penske asked. ‘Absolutely.’

In a head-to-head duel for the ages, Pagenaud defeated none other than Rossi with a dramatic pass on the penultimate lap, then holding on the rest of the way to hand Penske his 18th win in ‘The Greatest Spectacle in Racing.’ 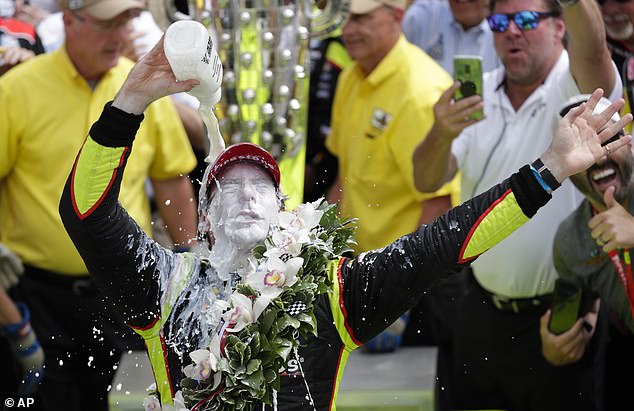 Simon Pagenaud douses himself with milk after winning the Indianapolis 500 at the Indianapolis Motor Speedway on Sunday. It is a decades-long tradition for the winner of the Indy 500 to drink milk and then dump the milk onto their heads 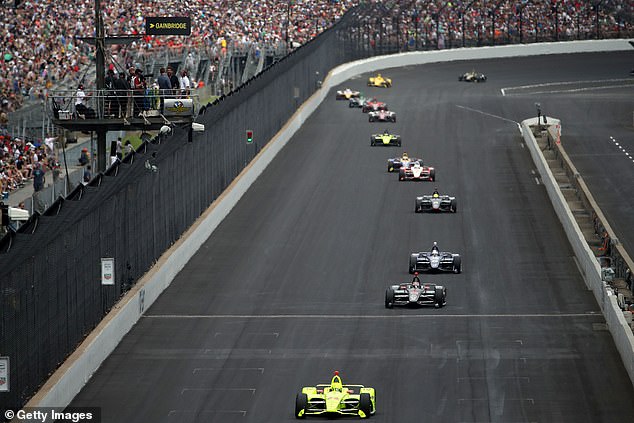 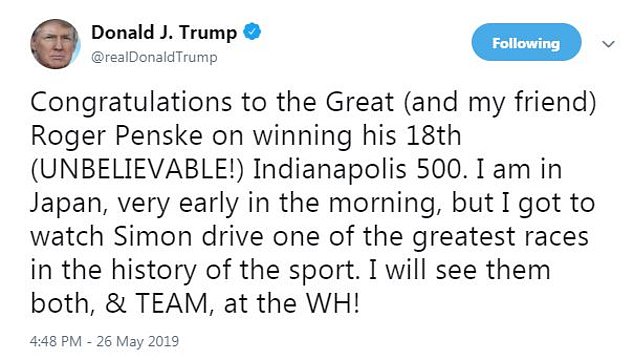 President Trump phoned Penske in victory lane from Japan, where he was meeting with Prime Minister Shinzo Abe over trade. The president tweeted on Sunday: ‘Congratulations to the Great (and my friend) Roger Penske on winning his 18th (UNBELIEVABLE!) Indianapolis 500’

Even sweeter, it came the 50th anniversary of Penske’s arrival at the Brickyard.

Donald Trump phoned Penske in victory lane from Japan, where he was meeting with Prime Minister Shinzo Abe over trade.

The president tweeted on Sunday: ‘Congratulations to the Great (and my friend) Roger Penske on winning his 18th (UNBELIEVABLE!) Indianapolis 500.

‘I am in Japan, very early in the morning, but I got to watch Simon drive one of the greatest races in the history of the sport.

Penske passed the phone to Pagenaud, and Trump later tweeted an invite to the White House for the winning team.

Penske, who was there earlier with Joey Logano last month to celebrate last year’s NASCAR Cup Series championship, said Trump told him: ‘I must have been your good-luck charm.’

Pagenaud and Rossi swapped the lead five times over the final 13 laps, and the margin of victory was a mere 0.2086 seconds – the seventh-closest finish in the 103 years of the race.

‘It’s a dream come true. A lifetime trying to achieve this,’ said Pagenaud, who dismissed the thought over job security as he celebrated his first Indy 500 win.

‘The milk motivated me. I was just focused on the job, man.’

He was referring to the decades-long tradition for the winner of the Indy 500 to drink milk and then dump the milk onto their heads.

Pagenaud was dominant all day, leading 116 of the 200 laps, and the win was cathartic.

He stopped his car at the start-finish line and hopped out to share the moment with his fans.

And once he finally made his way to victory lane, Pagenaud climbed from his car and let out a primal scream, then dumped the entire bottle of milk over his head.

‘I never expected to be in this position,’ Pagenaud said, ‘and I certainly am grateful.’ 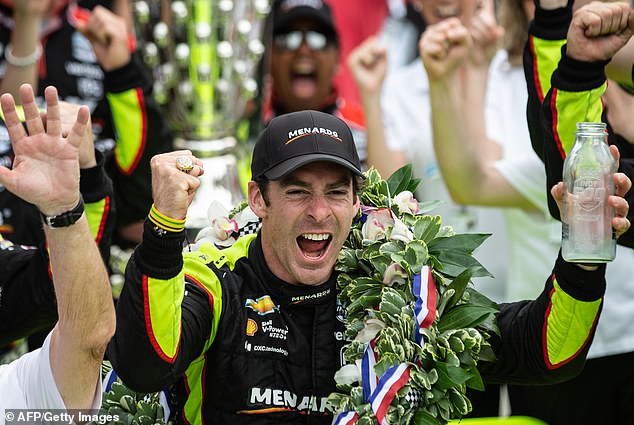 Pagenaud was dominant all day, leading 116 of the 200 laps. He stopped his car at the start-finish line and hopped out to share the moment with his fans 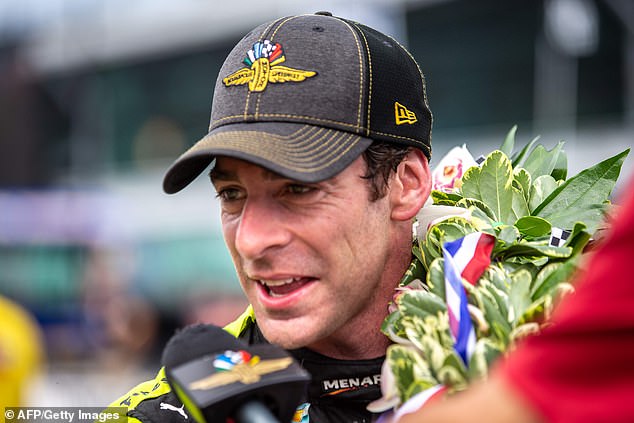 A month ago, Pagenaud was rumored to be in danger of losing his spot on Team Penske

It was his third win in the crown jewel race in the past five years and fifth in the past 14.

It was a banner day, too, with Josef Newgarden finishing fourth and Power in fifth.

Rossi lost his cool several times in the race, but the Californian had better fuel mileage than Pagenaud and the Penske cars. The 2016 race winner twice charged to the front in the closing laps.

‘Horsepower. That’s unfortunately the way it is,’ said Rossi, who was in a Honda for Andretti Autosport.

‘I think we had the superior car. We just didn’t have enough there at the end.’

Pagenaud was in a Chevrolet, and the bowtie brand was the dominant engine all May. 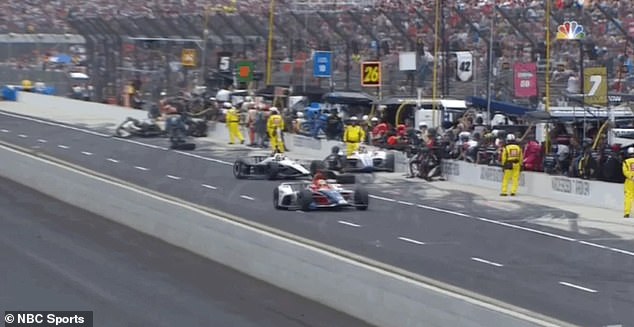 During the race, a crew member for Jordan King, suffered a leg injury when King’s No. 42 Honda bumped into him as he was pulling into a pit stop 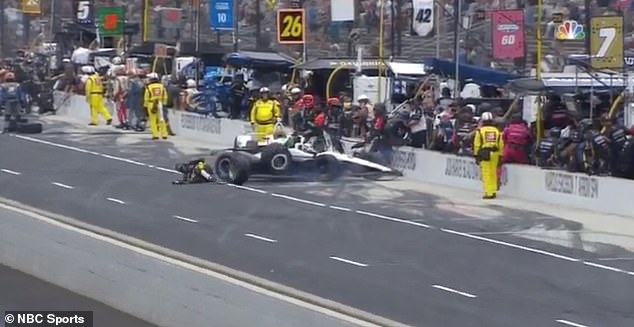 It swept the top four spots in qualifying, won the race and took four of the top six spots.

Pagenaud is the first Frenchman to win the Indy 500 since Rene Thomas in 1914.

Indianapolis records count five French winners, but Gil de Ferran in 2003 and Gaston Chevrolet in 1920, while born in France, list other nationalities.

Pagenaud was the 21st winner form the pole and first since Helio Castroneves a decade ago.

As he began the traditional victory lap in the back of a convertible, Rossi was one of many drivers to walk onto the track to congratulate him.

The American leaned in for a genuine embrace.

‘Nothing else matters but winning,’ Rossi said. ‘This one will be hard to get over.’

Rossi, who drove from the back to finish fourth a year ago, had been patient through the first half of the race and set himself up to take control after the halfway point.

But a troublesome fuel hose on a pit stop caused a lengthy delay, and Rossi was angrily pounding his steering wheel while imploring the Andretti crew to get him back on track.

He really lost his cool when he couldn’t get past the lapped car of Oriol Servia.

As Rossi finally raced by, he angrily raised his fist at the Spaniard.

A late wreck then caused an 18-minute stoppage with Rossi set to restart the final sprint as the leader, and he conveyed his mood over his team radio.

‘A bunch of hungry, angry cars behind me,’ Rossi said. ‘Little do they know I’m angrier.’

Pagenaud got him on the restart, though, and the two went back and forth four more times before Pagenaud locked down the win. 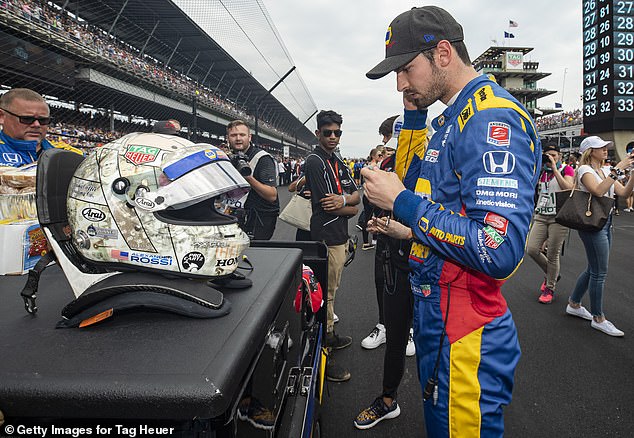 Pagenaud beat last year’s winner, Alexander Rossi (seen above in his pit area before the race on Sunday)

Santino Ferrucci in seventh was the highest finishing rookie.

Attention had been heavy on rookie Colton Herta, but the 19-year-old driver for team owners Mike Harding and George Steinbrenner IV was the first driver out of the race when his gearbox broke.

Indianapolis Motor Speedway officials had prepared for rain, and perhaps even a postponement, in NBC’s debut as broadcaster.

But it was a bright, sunny day – a picture-perfect showcase for Pagenaud to triumph on Memorial Day weekend.

During the race, a crew member for Jordan King, suffered a leg injury when King’s No. 42 Honda bumped into him as he was pulling into a pit stop.

Chris Minot, the tire changer, was taken off pit road and placed on a stretcher, according to USA Today.

He was awake and alert as he was being transported to IU Methodist Hospital.