Simon Russell Beale is fabulous as the titular monarch in Joe Hill-Gibbins’s cut-down Shakespeare play, The Tragedy Of King Richard The Second

The Tragedy Of King Richard The Second

Poor old Richard! His crown is gone and he’s rotting in prison. ‘I wasted time and now doth time waste me.’

No wasting time here, though. This cut-down version goes at an incredible lick, with Simon Russell Beale as Shakespeare’s ‘unkinged’ monarch.

Forget any Plantagenet opulence in director Joe Hill-Gibbins’s diet version. The set is a grey box with buckets of water, blood and soil. 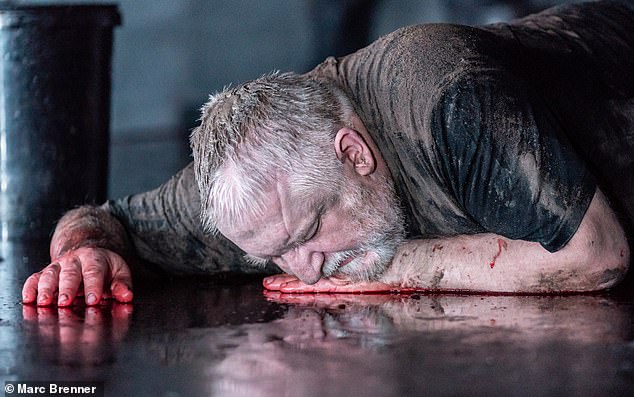 While it’s a farcical evening at times and the Westminster parallels are doled out in buckets, this Almeida production is to be recommended for Simon Russell Beale’s fabulous king (above)

The actors – just eight of them, some seriously under par – are in jeans. Saskia Reeves plays four parts in this story of rebellion, abdication and murder.

John of Gaunt’s ‘sceptr’d isle’ speech sums up an evening of England poised over the plughole.

It’s a farcical evening at times, with shouty nobles throwing down gauntlets (gardening gloves) and exchanging insults. I hoped someone would say, ‘Oh, saucy Worcester!’ as per the old Beyond The Fringe sketch.

One of the oddest early performances of Richard II, in 1607, was by the crew of a British East India Company ship off the coast of Sierra Leone.

Drenched and mucky, it all ends with the deposed leader in one hell of a mess.

The Westminster parallels are doled out in buckets but the play’s spiritual dimension is all but junked.

This production is recommended chiefly for Beale’s Richard – a fabulous portrait of poetic ruefulness and bitterest misery.

The Big Top may have declined in recent decades but Circus 1903 turns the clock back 115 years with this old-school piece of entertainment.

There are traditional gasp-inducing feats – including knife-throwers, contortionist and a hire-wire act where a woman effects the splits between two men on bikes (yikes), and the animals are elephant puppets created by the War Horse team.

It’s all given a hint of Cirque du Soleil drama with pumping music, and US ringmaster ‘Willy Whipsnade’ makes a joke about a ‘gender-neutral bearded person’.

So no animals, no funny smells, and this popular family show – though with rather too many audience participation spots for my liking – is even suitable for the clown-averse.