A gang of knife-wielding moped robbers led by a talented teenage singer have been locked up for more than 13 years.

Sitey Mairuf and three other teenagers muggers wore skull masks while targeting South London commuters on their way to work between December 2016 and March this year.

They stole six scooters as well as laptops and phones from their victims – which included a police officer – in Victoria, Mitcham, Herne Hill, Kennington and Camberwell.

Mairuf, 19, of South Norwood Hill, racked up thousands of YouTube views with her rendition of Sam Cooke’s classic ‘A Change Is Gonna Come’.

But her gang robbed at least 11 victims in a terrifying crime spree, with younger muggers – including a 14-year-old boy – looked up to her as ‘big sister’.

Mairuf’s mother, who wore a black headscarf, wept bitterly as her daughter was jailed for two and a half years at Inner London Crown Court.

Relatives of the boy, now 15, screamed abuse at Judge William Wood, QC, after he jailed him for three and a half years.

Two 16-year-old boys were also part of the large gang of moped-riding thugs – many of whom are still at large. The four youths were all convicted of conspiracy to rob after a trial. 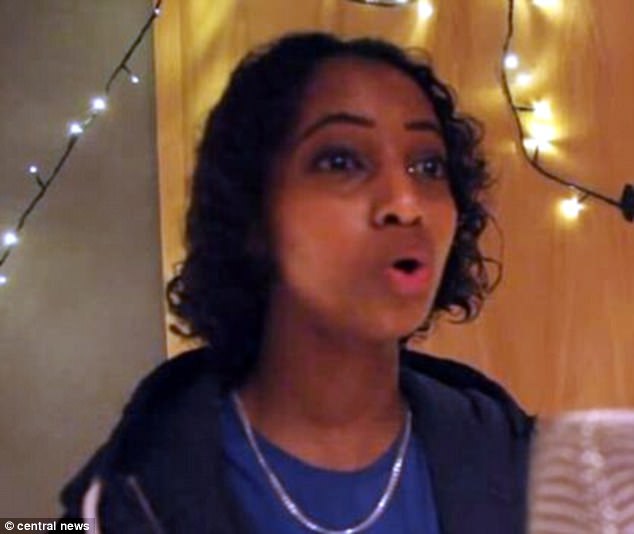 One of the 16-year-olds was sentenced to four years and the other had three and a half years added to a six-year stretch he is already serving for manslaughter after killing a man by throwing a flare into his car ‘for fun’ while he slept inside.

The 16-year-olds waved knives at a police officer and stole his motorbike as he rode into work past Brockwell Park in South London at 5.50am on March 10, the court heard.

Prosecutor Daniel Fugallo, said: ‘These defendants, together with others who have escaped, were involved in robbery.

‘The products of that conspiracy were no fewer than 11 robberies or attempted robberies.

‘The hallmarks of the robberies or the attempted robberies were the use of mopeds or motorbikes to move in and out quickly.

‘The use of masks, including one which had a skull, designed not only to disguise themselves but to terrorise their victims. 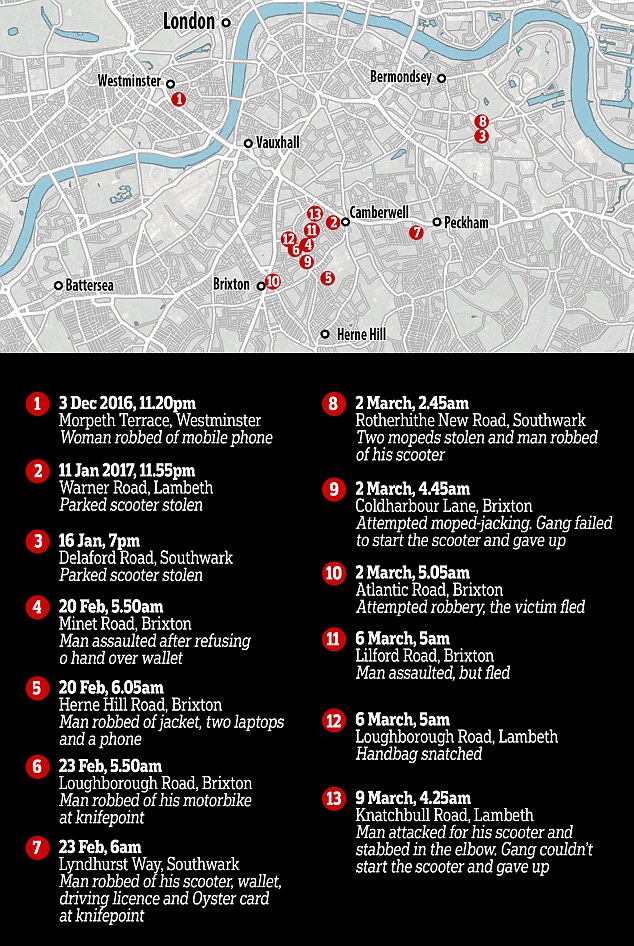 ‘Of course, the threat of violence and the use of actual violence involving what was described as a large combat knife and one occasion when a knife was used to stab one of the victims in his left arm.

‘One of the victims described the lasting impact of this incident on her – difficulty sleeping and a change in her mind from being an upbeat person to being one that is quiet and introverted.’

Sentencing the gang, Judge Wood said: ‘It is outrageous that people do not feel fit or safe in starting or setting off on a motorbike in an important line of work.

‘Frightening masks were used and it is inevitable that the victims would be traumatised.

‘The wider public regards what these four young people have done as outrageous.

‘It is shocking to think that people going lawfully about their business should face this danger.

‘It is necessary that the public should know that significant sentences are handed out for moped robberies.

‘These four defendants were convicted of one offence of conspiracy to rob, the conspiracy involved the use of mopeds, the threat of knife attacks and in one case the actual use of a knife.

‘In every case, except the first, the victims were alone and in the first were two young women. 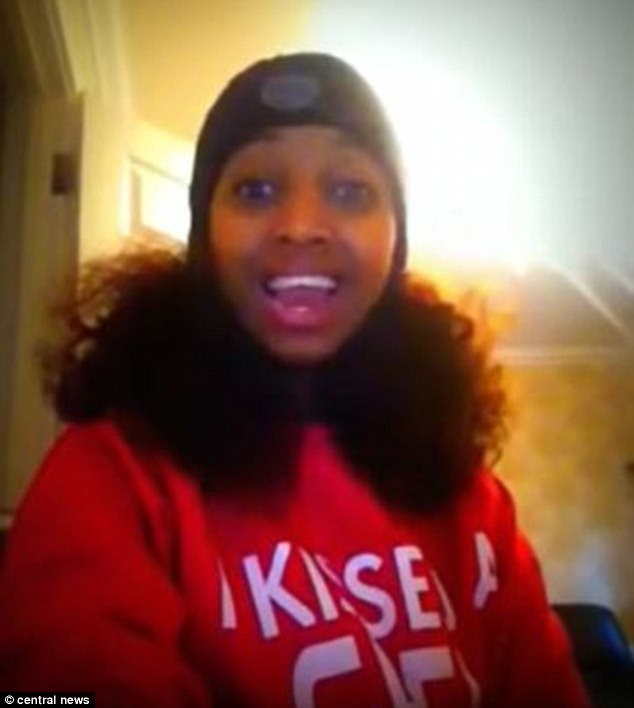 Mairuf was seen as the ‘big sister’ of the gang, which wore skull masks while carrying out attacks on morning commuters

‘The police officer was confronted by people wearing crash helmets, masks and threatening with a knife.

‘I have seen a video which shows the criminals celebrating and taking gratification in their crime.’

As the four were sent down relatives of the youngest robber screamed abuse at the judge and one family member yelled: ‘How can you do this? He’s only 15.’

The judge ordered them out if court and said: ‘I do not believe that the public would not approve of a word that I have said, it is appalling to think that the families would not consider this sentence long enough.’

While family members of the youths including mothers and sisters wept in the public gallery, teenage friends of the robbers started taking pictures on their phones in court and shouting ‘free the gang, free the team.’

Police were called to the court in south London to quell the disturbance and clear the court.

Younger gang members looked to her as ‘big sister’, the court heard.

Detective Constable Adam Barry said: ‘Police are working hard to keep the public safe and make the streets hostile territory for criminals who steal scooters, mopeds or motorbikes and then use them to commit crimes.

‘These offenders rely on the unwariness of the public to commit their crimes. Therefore it is so important that the public remain vigilant at all times to protect their personal property.’