Singing has been associated with numerous health benefits, from relieving stress to improving lung function.

Seniors who sang in a choir also reported more of a sense of togetherness, researchers said, especially those who had been in a choir for more than a decade.

Those who were newer to singing reported better overall health, though, possibly because they joined the choir as part of amove toward an active lifestyle, the researchers theorized.

Choir singing can improve cognitive flexibility, the ability to switch between different mental tasks, according to a new report from the University of Helskini. Singers also reported better social integration, especially if they had been in a choir for more than a decade

Previous research on the power of music to improve cognitive abilities has mostly focused on playing musical instruments.

But according to a new report published in the journal PLOS ONE, choir singers can reap similar benefits.

Researchers at the University of Helsinki surveyed 162 healthy seniors over the age of 60, two thirds of whom were part of a choir.

Participants regularly filled out questionnaires about their cognition, mood, social engagement, quality of life, and role of music in their daily life. 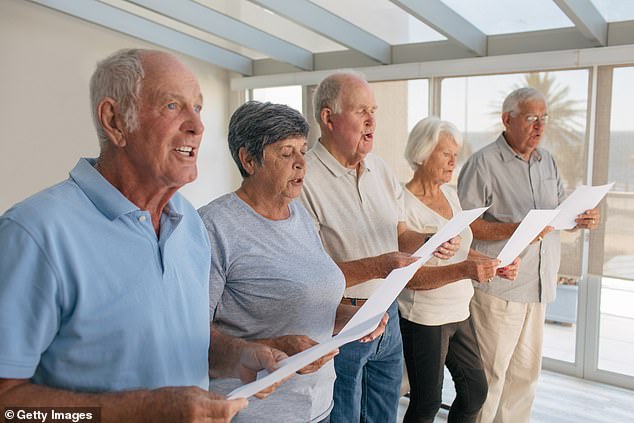 Singers who joined a choir less than ten years ago reported higher of overall health than either longtime choristers or non-singers. Researchers theorize that could mean they took up singing as part of an overall effort to engage in a more active lifestyle

Slightly less than half of the seniors were also given cognitive tests that gauged memory, verbal skills, executive function and other mental skills.

The results show that elderly singers had better verbal flexibility – a sign of better cognitive flexibility – than those who did not sing in a choir as a hobby.

‘It’s an activity that requires versatile information processing, as it combines the processing of diverse sensory stimuli, motor function related to voice production and control, linguistic output, learning and memorizing melodies and lyrics, as well as emotions roused by the pieces sung,’ said lead author Emmi Pentikäinen, a psychology researcher at University of Helsinki.

Those seniors who sang also had more feelings of togetherness and social integration, especially those who had been in a choir for more than a decade.

Interestingly, the seniors who had joined less than ten years ago reported being happier with their overall health than those with more choir experience or none at all.

‘It’s possible that the people who have joined a choir later in life have thus found the motivation to maintain their health by adhering to an active and healthy lifestyle,’ said Pentikäinen.

‘Then again, the relationships and social networks provided by being in a choir among those who have done it for longer may have become established as an integral part of their lives, therefore appearing as a greater feeling of social togetherness,’

The coronavirus pandemic, unfortunately, has put a damper on group singing, both before audiences and in practice spaces.

A choir practice in Washington state in March turned into a superspreader event, with one chorister spreading COVID-19 to 52 other people, two of whom died from the virus.

A June 2020 study from the Scientific Advisory Group for Emergencies (SAGE) found singing — particularly in large groups for a prolonged duration — was ‘more risky’ in regards to virus transmission because it can produce more aerosols, or droplet nuclei, than normal talking or breathing.

But that doesn’t mean there’s not a way to still enjoy making music during lockdown, says Pentikäinen.

‘People have been singing together on balconies and from open windows to lift their mood,’ she said.

Her research follows on the heels of earlier studies on the benefits of group singing for seniors: According to a 2010 study in the journal Music Precepts, singing can help people cope with neurological conditions like Parkinson’s disease and stroke-related language problems.

Researchers also believe the fact that singing stimulates multiple areas of the brain at the same time may allow those with brain injuries to compensate using other regions of their gray matter.

People with Alzheimer’s disease and other forms of dementia can often recall song lyrics better than other words, and singing familiar songs can spark memories of forgotten events.

Singing can even help with grief: According to a 2019 study from University College London’s Department of Behavioural Science and Health, people facing the death of a loved one had less depression and an improved sense of well-being if they were in a choir.