Researchers in the U.S. have created a ‘vaccine’ they believe will help treat multiple allergies, including hay fever.

The jab contains a cocktail of allergy-causing compounds and is administered in several increasing doses over eight weeks.

The theory is that by gradually upping the amount of these triggers in a controlled way (a treatment known as immunotherapy), the immune system becomes more tolerant to them, which eradicates symptoms and provides long-term protection against other allergies.

In a new trial, patients with common allergies, such as hay fever and allergic rhinitis, will be given the new injection or a placebo.

Around one in five people has allergic rhinitis, a reaction to triggers, also called allergens, such as dust or animal dander.

Allergens contain proteins that can trigger the production of histamine, a chemical in the body that causes cold-like symptoms, such as sneezing, itchiness and a blocked or runny nose.

Whereas hay fever, also called seasonal rhinitis, is caused by pollen or mould spores at certain times of the year, allergic rhinitis can in some cases affect people all year round, when it is known as perennial rhinitis.

Treatments include antihistamines and corticosteroids, which tackle inflammation and swelling. Side-effects of antihistamines can include drowsiness, dry mouth and blurred vision, while long-term use — more than three weeks — of steroids has been linked to an increased risk of health problems such as weight gain and muscle weakness.

Immunotherapy, usually in the form of drops, can be given to those with severe allergies (typically to pollen) to try to make the immune system less reactive to a specific allergen.

The conventional treatment involves being given small doses of one allergen. However this works only for one allergy and needs to be given at three monthly intervals for years. 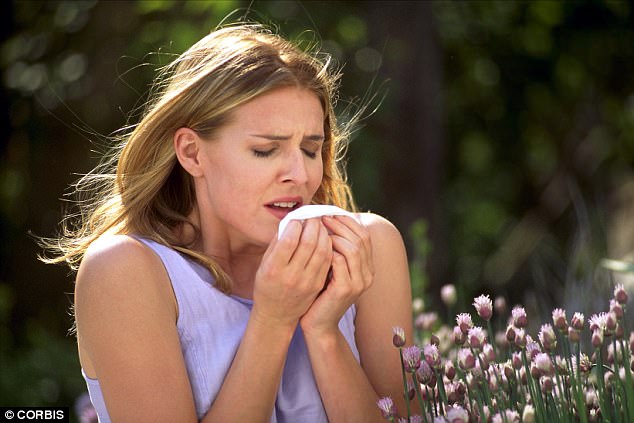 The theory is that by gradually increasing the dosage of the vaccine over several weeks, the immune system will become strengthened

But in the new trial, doctors are using a cocktail of six different allergens in the same shot and it’s hoped that the effects of the new jab will be lifelong. The treatment is designed to help people with moderate to severe perennial rhinitis who may or may not have hay fever, too.

In the trial at Johns Hopkins University in the U.S., 36 patients will be given increasing doses of the jab (named Allergen Immunotherapy Extract) or a placebo, twice a week for eight weeks. They will be monitored for symptom changes for more than three months. Commenting on the study, Christopher Corrigan, a professor of asthma, allergy and immunology, at King’s College, said: ‘Immunotherapy is not a cure but significantly reduces symptoms in most patients.

Meanwhile stress during pregnancy may increase the risk of allergies in children.

New research, based on an analysis of data from more than six million people, examined links between prenatal stress in pregnancy and subsequent allergies.

Results published in the journal Clinical and Experimental Allergy showed that any type of stress — whether anxiety, bereavement, even money problems — was associated with a 30 per cent higher risk of the baby suffering allergic rhinitis. It’s thought stress increases levels of the hormone cortisol which may affect the developing immune system.

If you’re prone to cold sores and go for a walk on a warm sunny day, try to walk with your back to the sun, as sunshine can trigger them, advises Dr Justine Hextall, an NHS Consultant dermatologist. Also use a good sunblock on your lips and face.

Researchers are using it on 300 smokers in trials in the U.S., targeting an area of the brain thought to play a role in craving.

Participants will have 20- minute sessions for four weeks. A study in the journal Biological Psychiatry tested 20-a-day smokers for whom other methods of quitting had failed and found more than a third had not smoked six months after the new treatment.

Why a cup of tea might be good for your sight

Can drinking tea help lower the risk of blindness?

Based on a survey of 1,600 people, researchers from the University of California discovered that those who drank at least one cup of tea a day had a 74 per cent reduced risk of developing glaucoma.

Glaucoma occurs when pressure builds in the eye, which, in turn, puts pressure on the optic nerve.

The researchers, who published their findings in the British Journal of Ophthalmology, believe tea could be beneficial due to its high flavonoid content.

These compounds are thought to be protective to the tissues and nerves around the eye.

Bizarre injuries your body can inflict on itself. This week: Yawning can dislocate your jaw

Yawning is a surprisingly common cause of a dislocated jaw. A study on the International Journal of Oral and Maxillofacial Surgery in 2015 found yawning was responsible for nearly 50 per cent of the 94 jaw dislocations examined.

In 2011, a 16-year-old student from Northampton, Holly Thompson, dislocated her jaw while yawning deeply during a politics class, which left her unable to close her mouth. (Other common signs include pain, difficulty speaking and your upper and lower teeth no longer aligning.) Holly’s friend tried to close it for her, but this only caused more pain.

‘Everyone burst out laughing. It was awful,’ she recalled.

Holly was taken to A&E at Northampton General Hospital after the jaw-lock (or temporomandibular joint dislocation) occurred. The doctors prised her jaw back into place by forcing 26 wooden splints into her mouth, in order to lever the jaw back into its sockets.

How drugs change our behaviour. This week: Insomnia drug can make you hungry

A quick-acting sedative used to treat insomnia can cause an unusual side-effect: unconscious binge eating.

A study by the Federal Health Department in Australia in 2007 identified cases where the drug zolpidem was linked to sleepwalking, hallucinations and amnesia. One patient put on 23kg over seven months while taking zolpidem and ‘it was only when she was discovered eating in front of an open refrigerator while asleep that the problem was resolved’.

The drug triggers the release of GABA, a brain chemical that induces sleep, but it’s not clear how it might cause hunger.

Sea cucumbers could be an unlikely new treatment for wound healing.

The four-inch-long, worm-like marine creatures — a delicacy, and used in Chinese medicine — have been found to contain anti-inflammatory compounds that can aid healing.

A trial involving 25 patients at University Hospital Malaysia found that using a gel made from sea cucumbers led to faster healing, stimulating the release of compounds involved in tissue repair, according to the results published recently in the Journal of Biomedical Materials Research.

Previous studies have shown that the creatures are very high in chondroitin sulfate, used to treat joint pain and arthritis.

The asthma inhaler that’s easier to use

An inhaler that delivers drugs in a dry form rather than a standard aerosol may be easier to use for those with asthma and chronic obstructive pulmonary disease (COPD), according to a new review.

The Ellipta can hold multiple medications so is suitable for those with complex conditions. The medication is pushed out of the inhaler by force rather than needing a chemical propellant, which is what can leave an unpleasant taste in the mouth with standard inhalers.

A review by Portsmouth Hospitals NHS Trust, published in Therapeutic Delivery, said patients found it easier to use.

People who experience knee pain, for example when putting on socks or getting in and out of a car, are more at risk of depression, a new study has found.

A team from Japan monitored 573 people aged 65 and over for two years. While none had depression at the start of the study, by the end, those who experienced knee pain — commonly caused by osteoarthritis — were more likely to be depressed.

The researchers, writing in the Journal of the American Geriatrics Society, suggest that asking older people whether their knees hurt as they carry out tasks could help screen those at risk of depression. They believe it is the combination of pain and difficulty doing day-to-day tasks that can lead to a low mood.