The show must go on is an old theatrical saying that could have been invented for Nell Gifford. She is co‑founder of Giffords Circus which tours the south of England every summer.

For the past three years, she’s juggled producing complex material and breaking in new acts with three cancer diagnoses of her own and gruelling treatment. At the same time, her marriage broke down, leaving her a single mum to twins Red and Cecil, nine.

Sitting on a sofa outside the big top, she is exhausted from her first session of the latest chemotherapy the day before, and yet her phone constantly pings with messages needing her attention.

‘I’m not saying ‘poor me’ because I’m the happiest person alive — I really enjoy my life,’ says Nell, sipping tea. ‘But the past four years have been a long, dark struggle.’

The show must go on: Nell with son Red

Nell, 46, was diagnosed with oestrogen receptor (ER) positive invasive ductal carcinoma in her left breast in 2015; it’s one of the commonest forms of breast cancer, and is receptive to drugs which block the hormone oestrogen.

After a year’s remission, she developed the same cancer in her right breast. Then in January this year, she felt a tiny disc, like a sequin, in her neck.

A natural optimist, the shock when she was told the cancer was now in her bones and liver, and she had 18 months to live, was devastating.

‘I’ve had lots of really heavy diagnoses, which each time makes you stagger, and you think you’re going to collapse because there is just no way to process it. You feel completely out of control and utterly devastated,’ she says.

‘For me, that mental turmoil lasts about two weeks. Then you get more information and develop more understanding, and within a few weeks, the world stops spinning and I get control back.’

When Nell first felt a hard lump ‘like a round marble’ in her left breast in 2015 she wasn’t particularly worried: ‘I’d had loads of lumps when I was breastfeeding so I thought it might be a cyst.’

Her GP referred her to Cheltenham General Hospital where she had an ultrasound, a mammogram and a biopsy. A week later she was told it was cancer.

‘My first feeling after the shock was of obliterating loneliness — my marriage [to circus co-founder Toti Gifford] had imploded just a month before. So it’s been very, very lonely.’

With this latest round of treatment, she is going to lose her hair for the third time. ‘The first time you’re told your hair is going to fall out, it’s really scary. But by the second and third time, it’s meaningless,’ she says.

According to Cancer Research UK, 55,200 women are diagnosed with breast cancer in Britain every year, a figure which has increased by 50 per cent during the past 25 years.

Lifestyle factors such as obesity are thought to play a part, but about 5 to 10 per cent of breast cancers are hereditary, caused by genetic mutations.

Thanks to better understanding of the disease and new therapies, more than 78 per cent of sufferers now survive for ten years or more.

This week: Is shingles contagious?

THE EXPERT: Judy Breuer, a professor of virology at University College London, said Google is right. ‘You can’t “catch” shingles from someone else,’ she added.

‘Shingles is a painful skin rash caused by the Varicella-zoster virus, which also causes chickenpox. After you’ve had chickenpox, the virus lies dormant in your nerves and can reactivate at a later stage, usually when your immune system grows weaker with age. This reactivated illness is known as shingles. Therefore, anyone who has had chickenpox can get shingles, but you don’t “catch” it.

‘Shingles is only contagious if you’ve never had chickenpox — but in this case, you will get chickenpox, not shingles.’

In the above scenario, it is the shingles blisters that spread the virus — if they weep, then the live virus can be inhaled by other people. The blisters can keep spreading the virus until the spots dry up, after around five to seven days.

About 70 per cent of cancers are ER-positive, like Nell’s, which means the breast cancer cells have receptors or proteins that hormones such as oestrogen can attach to and which stimulate the cancer to grow and spread.

Nell had surgery to remove the lump in her left breast and 27 lymph nodes under her arm, followed by chemotherapy. She then had radiotherapy and a course of tamoxifen tablets, which block the effects of oestrogen.

‘Going through treatment that year, running the circus and being in the throes of separation, it felt as if everything around me was breaking up. I’d start crying and become really frantic, then I’d just drop to the floor.’

She descended into a bout of depression, which lasted more than six months, a physical and emotional pain which felt like ‘night-and-day torment’.

‘I was in a constant state of high alert, as if I was standing in the middle of the motorway.’

She bounced from one private psychiatrist to the next, who all prescribed different antidepressants. Last year, Nell was told the cancer had spread to her bones. Standard NHS treatment with palbociclib and letrozole (which reduce the amount of oestrogen in the body) put her into six months of remission before the cancer started to progress again.

It was then that her sister, the journalist Clover Stroud, introduced her to what she calls ‘the world of elite oncology’.

While standard NHS pathology of patients with breast cancer includes analysis of oestrogen receptors and the role of HER2, a gene that can play a part in the development of breast cancer, a number of private doctors are now offering analysis of a patient’s full DNA profile. The idea is that treatment can then be individually tailored to each patient.

Dr Tim Crook, a consultant oncologist at St Luke’s Cancer Centre at the Royal Surrey County Hospital, who treats Nell in his NHS clinic, believes it takes the guess work out of treatment.

‘The evidence base we have suggests that chemotherapy drugs such as paclitaxel and capecitabine should be used as first-line chemotherapy treatment for breast cancer,’ he explains. ‘Yet the response rate is only 40 to 50 per cent.’ 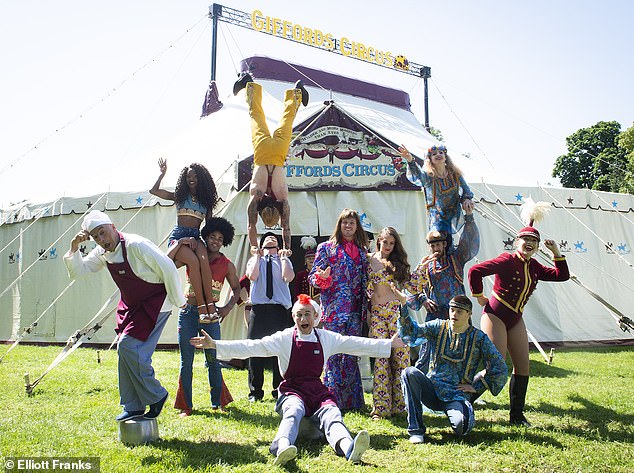 A group of young performers at Giffords Circus, which was co-founded by Nell Gifford

‘It [analysis of a patient’s full DNA profile to provide tailored treatment] combines genetic and gene expression analysis [how genes are activated to produce a specific protein] of cancer tissue with laboratory assessment of the sensitivity of the patient’s cancer cells to anti-cancer drugs alone and in combination.’

Using this method, it was found that Nell has a PALB2 gene mutation. That together with laboratory drug sensitivity tests showed that her cancer cells were very sensitive to carboplatin and gemcitabine.

Going through treatment that year, running the circus and being in the throes of separation, it felt as if everything around me was breaking up. I’d start crying and become really frantic, then I’d just drop to the floor.

‘So that’s exactly what we are treating her with,’ says Dr Crook. He is hopeful Nell will achieve complete remission.

But Carlos Caldas a professor of cancer medicine at the University of Cambridge, warns that some tests are expensive and unproven. ‘I have reservations as to whether they add anything to the very good histopathology already offered by the NHS,’ he says. ‘We have the best pathology in the world, particularly for breast cancer.’

Nell is trying to continue as normal despite starting months of chemotherapy. Red and Cecil go to school in Stroud, Gloucestershire, where their father lives and visits every other week during circus season.

Nell says: ‘I can believe I’m doomed, or I can choose to believe I’m not doomed. It seems to me it’s better to have hope. It’s important to control your mind and not think about whether you’re going to see your children grow up. I have to push the sadness away with love and light and creativity.’

She admits there are days when she feels crushing fatigue, but adds: ‘Given how many women have breast cancer, I think becoming an invalid is a bit outdated. Carry on, do whatever you can do — whether it’s a half-marathon or a life drawing class.

‘You may even find yourself doing more than you did before. Just don’t take cancer lying down.’