Many people worry about finding the right person to settle down with, or having a failed marriage – but now people who have ended up alone have revealed it’s nothing to be afraid of.

Singletons from around the world who haven’t found a life partner took to the Q&A site Quora to reveal what it’s really like, with most of them giving a very positive account of solo living.

In response to the question, ‘What happens when you end up alone without a partner? Is it really that terrible of a life?’

Others said it had taken a bad relationship to make them realise it’s so much better to be alone, with one saying: ‘I felt so lonely with my husband. I feel fulfilled now. It was a total liberation.’

Another added: ‘You get to eat onions, do what you want, make mistakes without impacting somebody else’s process. There are so many benefits I do not know how to list them all.’

A divorced woman whose children have moved out, said she finally had the freedom she’s craved all her life.

‘It’s like pure oxygen,’ she said. ‘At last I have my own space and my own time and it’s all mine.’

Singletons who haven’t found a life partner took to the Q&A site Quora to reveal what it’s really like, with most of them giving a very positive account of solo living (stock image)

One woman said that some people, like her, are naturally just happier being masters of their own destinies and doesn’t feel lacking in any way for not having a partner.

Another agreed that some people are ‘naturally loners’ but admitted that she needs ‘a pet to make me whole’.

‘Being alone does have its advantages because you end up with a lot of “me time”,’ another added. ‘But it does get boring after a while.

‘Enjoy your “me time”, accumulate new friends. It really isn’t so terrible.’

A woman sounded a not of caution, saying that you need good friends around you and admitted she needed a pet to make her feel ‘whole’ 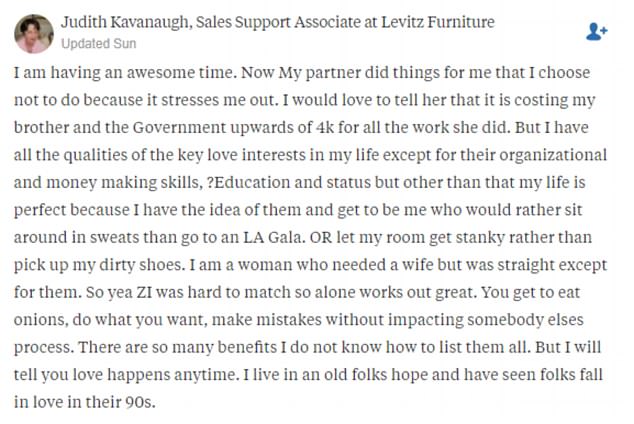 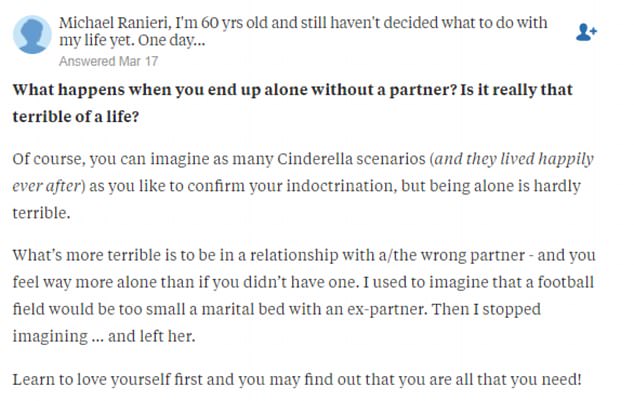 A sociologist said it’s more important to pursue your own dreams and passions, rather than waiting for the right person to come along