The BBC reporter who fronted the coverage of the controversial raid on Sir Cliff Richard’s house admitted he sent an email about ‘celebrity paedos’ to colleagues as ‘shorthand’ for the story.

Dan Johnson said he was trying to refer to the sex assault allegations brought against Sir Cliff by South Yorkshire Police without referring to him by name as he appeared at the High Court today.

Sir Cliff has taken legal action against the BBC over coverage of the police search of his apartment in Sunningdale, Berkshire, which was staged after an allegation in August 2014 and wants compensation at the ‘top end’ of the scale.

The court previously heard Mr Johnson described the coverage of the raid as a ‘bonkers but brilliant day’ in a text message to the head of corporate communications at South Yorkshire Police.

A reporter referred to Sir Cliff Richard, pictured at the High Court today, as a ‘celebrity paedo’ as ‘shorthand’ in a message to colleagues while he prepared to present a story about his home being raided by police, a hearing was told 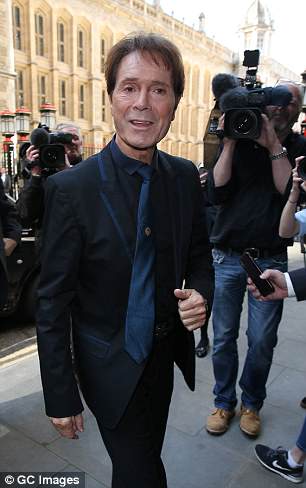 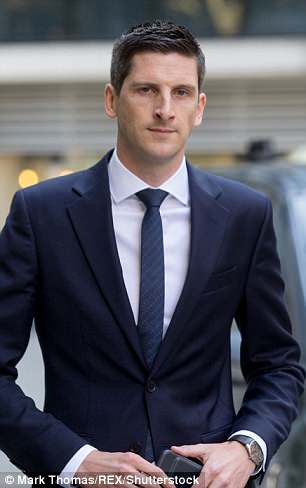 Sir Cliff (left) is suing the broadcaster for ‘substantial damages’ and Dan Johnson (right), who fronted the coverage, admitted he used the reference to talk about Sir Cliff without naming him

Mr Johnson said in a witness statement he spoke to a ‘contact’ about high-profile cases involving celebrities in June 2014, two months before the raid.

He said they had talked about high-profile cases involving celebrities and the contact had said there was ‘just one more major figure’ police were looking at.

Mr Johnson said: ‘I did not put South Yorkshire Police under any pressure in order for them to provide me with the information that they did.’

Mr Johnson, who said he was determined to keep his source confidential, added: ‘Because of the context of the other cases mentioned, and rumours I had heard about Sir Cliff’s sexuality, I took from this the impression that it was an allegation of sexual abuse involving a boy and dating back some years.’

The reporter said he ‘guessed’ Sir Cliff was involved because of ‘previous rumours’ he had heard and then the contact confirmed he had ‘guessed the right name’.

Mr Johnson told the court he used the term ‘celebrity paedos’ in an e-mail to colleagues as ‘shorthand’ for the story about Sir Cliff Richard.

He said: ‘That was an e-mail that was sent just to close colleagues referring to an issue that one of those colleagues knew about, so I was trying to refer to that issue without naming the person involved.

‘It is just a shorthand reference… the story that I had heard about him is what I have alluded to there.

‘It was a shorthand way of referring to the story I had heard without giving any more detail.’ 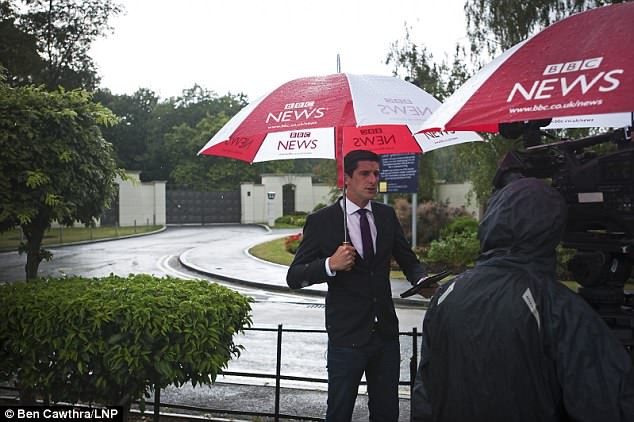 Meanwhile a lawyer for Sir Cliff Richard told the court the police investigation into sex assault allegations against the singer ‘would have been shorter’ if the BBC had not broadcast the raid on his home.

His legal team also told the court how Sir Cliff’s lawyers did their best to ‘mitigate the damage’ following the BBC broadcast.

In a witness statement, Mr Benaim said: ‘Quite clearly, but for the BBC actions on the day, there would have been no need for vast amount of work we did for (Sir Cliff).

‘In all likelihood we would have just carried on advising the client in the same low-level and intermittent basis we had been advising him on before August 14 2014.’

He added: ‘There were approximately 13,000 emails exchanged in relation to the matter between August 2014 and June 2016, which highlights the sheer volume of work that this firm undertook for (Sir Cliff) during the period.’

Mr Benaim said Sir Cliff had been in a ‘crisis’ situation.

He said: ‘We worked throughout the period alongside Sir Cliff’s PR advisers, which is an entirely normal practice and indeed necessary in crisis situations, which is clearly what Sir Cliff found himself in due to the BBC’s actions.’ 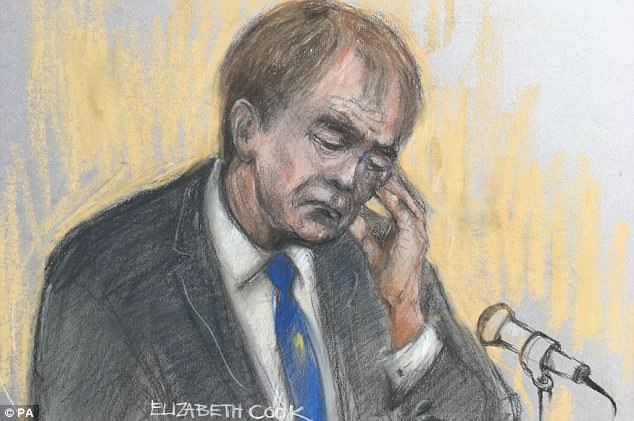 Meanwhile one of Sir Cliff Richard’s public relations advisers has told Mr Justice Mann he had a conversation with a BBC representative less than two hours before a 1pm news broadcast of a police search of the singer’s home in August 2014.

Phil Hall said he had not been given any hint of the nature of the broadcast and nothing had been said about helicopters or ‘quasi-rolling coverage’ or ‘special deals with the police’.

Mr Hall told the judge, in a written witness statement, he spoke to Bernadette Kitterick at about 11.15am.

He said he believed Ms Kitterick had tried to get hold of him ‘slightly earlier’.

‘I do not recall whether I phoned Ms Kitterick or whether she phoned me at 11.15am,’ said Mr Hall, a former journalist who edited the News of the World for five years before founding the PHA Media public relations agency.

‘But I am reasonably clear in my recollection of what Ms Kitterick said. Our conversation was relatively short.

‘She said that the South Yorkshire Police were searching (Sir Cliff’s) apartment and that the BBC were present onsite.

‘She then informed me that the BBC was planning to run a story about the search later that day and they would like to have a statement about it from my client.

‘She also said that the BBC were prepared to give me some time to do that.

‘I replied by asking Ms Kitterick if the BBC intended to name (Sir Cliff) in their story. She replied that she did not know.’ 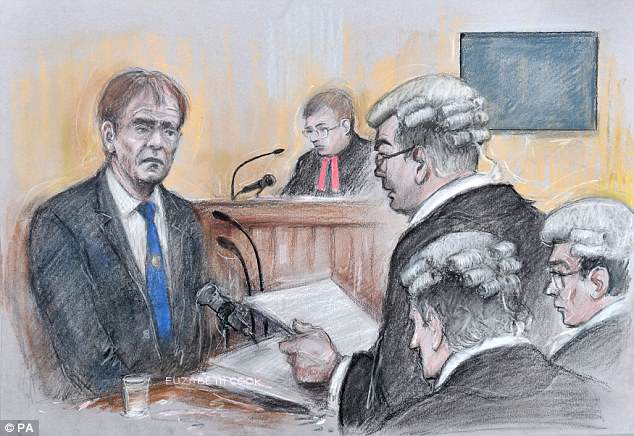 He said he had not been prepared to say anything on behalf of Sir Cliff, ‘not even “no comment”.

‘My reasoning, in essence, was in seeking to obtain a comment from (Sir Cliff), Ms Kitterick was not interested in anything he might have to say,’ said Mr Hall.

‘What she was trying to do, in my view, was to legitimise the BBC’s story, i.e. to obtain an “on-the-record” comment from (Sir Cliff) which enabled them to say that (Sir Cliff) had confirmed it was his apartment which had been searched.’

He added: ‘In relation to this phone conversation with Ms Kitterick at 11.15am UK time, Ms Kitterick said nothing which gave me any hint that the BBC was planning broadcasts of the nature that emerged at 1pm UK time.

‘Nothing was said about helicopters, or exclusives, or live or quasi-live rolling coverage, or any special deals with the police, or anything else of that nature. Nor was anything said at that stage about the BBC planning to go to air at 1pm.

‘As I have already said, the impression that Ms Kitterick gave me at this stage was that the BBC were planning to run a story at some point later in the day, and there wasn’t any great urgency about it because they were prepared to give me some time to prepare a statement.’ 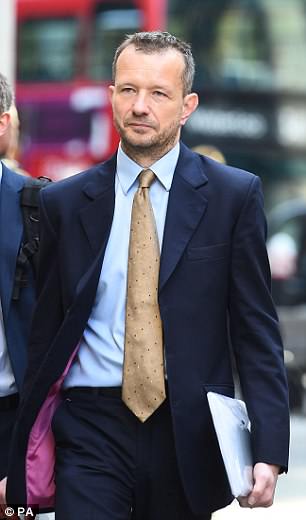 Mr Hall said a press release was issued on Sir Cliff’s behalf at about 2pm and added: ‘By that time, the BBC had identified (Sir Cliff) as the person whose property was being searched by the police in Sunningdale (I believe it was still in the process of being searched), and the story had gone all around the world.’

‘I was trying to protect (Sir Cliff) from media intrusion, and acted in what I believed to be his best interests at all times.’

‘Sir Cliff has said seeing coverage of the search at his apartment nearly four years ago was like ‘watching burglars’ going through his belongings.

He has taken legal action over BBC coverage of the police search, which was staged after a sex assault allegation, and wants damages at ‘top end’ of the scale.

Sir Cliff says the coverage was a ‘very serious invasion’ of his privacy.

He said he felt that his name had been ‘smeared’ all over the world, he said his health had suffered, he said he had never lived in the apartment again because it had become ‘contaminated’, and he said he wanted a public declaration that what the BBC did was ‘wrong’.

The BBC disputes his claims. Bosses say coverage of the search was accurate and in good faith.