Sir David Attenborough has revealed how he helped reunite the families of two Jewish refugee sisters who fled Nazi Germany on the Kindertransport and were taken in by his parents during the Second World War.

Irene and Helga Bejach, aged 13 and 12 respectively, arrived in August 1939, just 17 days before war broke out, and were among the 10,000 Jewish and half-Jewish children who fled to Britain as part of a mass humanitarian rescue effort.

Their mother had died many years prior when Helga was three-years-old, while their father, Dr Curt Bejach, was taken by the Nazis and deported to Auschwitz.

The girls, who were not brought up in the Jewish faith, also left behind an older sister, Jutta, who at 18-years-old was not eligible for the Kindertransport because of her age.

They would not see their sister again until nearly four years after the war ended. 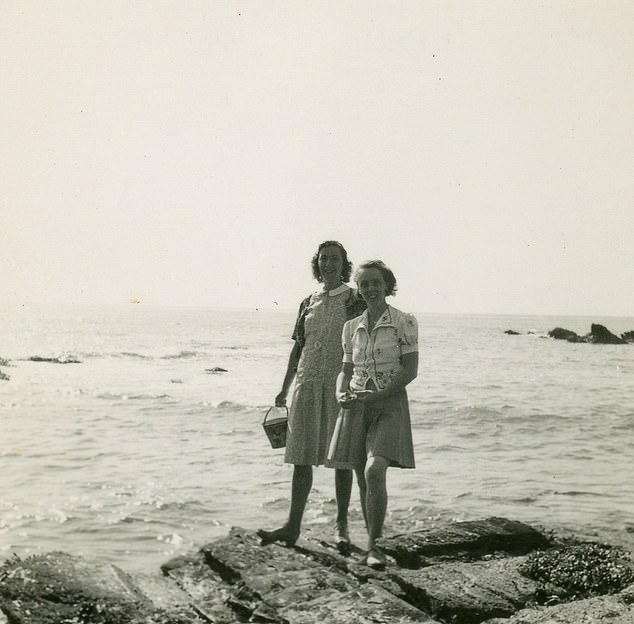 Helga with Mary Attenborough, who alongside her husband Frederick, took in the Jewish refugee sisters and looked after them during the Second World War

Feeling compassion for their plight, Attenborough’s parents, Mary and Frederick, decided to take the girls in to their Leicester home, where they would live for the next seven years and become like ‘sisters’ to their three sons, David, Richard and John. 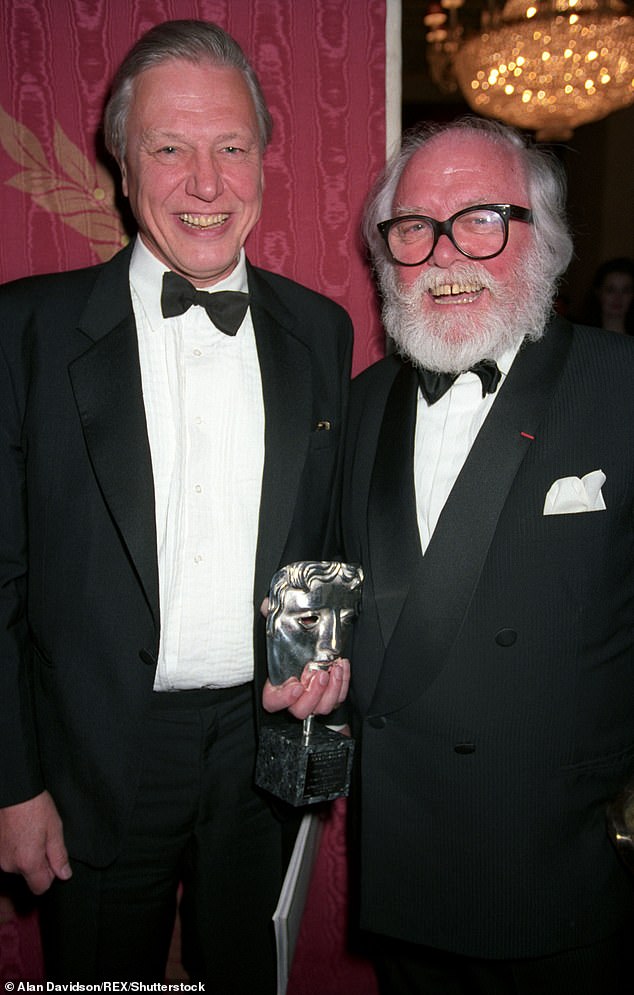 Richard Attenborough: ‘They were our sisters’

In 2009 –  five years before his death – Lord Richard Attenborough recalled his memories of Helga and Irene Bejach:

I will never forget when Helga and Irene first arrived at our home. They were two pale waifs with their pathetic little cases. They looked sad and ill. They were also nervous wrecks.

Their house in Germany had been smashed by Nazis with guns and theirfather taken away. After the girls had been with us for three weeks, mybrothers David, John and I were called into the study by our parents.

Our mother said, ‘We absolutely love you boys, but we will have to showeven more love to these girls because they are here on their own andwithout their parents. It is entirely up to you, darlings, if they stay.

We realised, even though we boys were all quite young ourselves, howshocked and frightened the girls were. My parents always stood up andwere counted wherever they saw an injustice being done. And theKinderstransport was a great example of caring for human dignity, forracial tolerance and for compassion.

The three of us boys had no hesitation in taking Helga and Irene into our family. We really did see them as sisters, virtually from the time we were told they were going to live with us.

Initially, they were very reclusive, but they grew into attractive and confident young women.They helped shape our lives. We went on holidays together, and played together as brothers and sisters, and I adored them.

After the war, Helga and Irene moved to America to join relatives, and both married there. I would talk on the phone to them at least once a month, certainly for the first 20 years after the war, and would see them when I went to America or they came over here.

We loved them and cherished them – and were so proud of them.

Filmmaker Richard, who passed away six years ago, recalled in 2009 how their mother said at the time:  ‘We absolutely love you boys, but we will have to showeven more love to these girls because they are here on their own andwithout their parents.

‘It is entirely up to you, darlings, if they stay.’

He revealed: ‘We realised, even though we boys were all quite young ourselves, howshocked and frightened the girls were.

‘My parents always stood up andwere counted wherever they saw an injustice being done.

‘And theKinderstransport was a great example of caring for human dignity, forracial tolerance and for compassion.’

He added how the Attenborough brothers ‘really did see them as sisters’ for the duration of their stay with the family.

While the brothers attended Wyggeston boys’ grammar school, the sisters enrolled at the girls’ school and Helga began to show promise as a ballet dancer.

In one revealing letter, Mary related how Helga had been placed under the guidance of Royal Ballet founder Dame Ninette de Valois, who was severe in her criticism of the young dancer.

Nevertheless, she was enrolled at a boarding school for dance and drama that was evacuated to Boscastle in Cornwall during the war.

In October 1946, a year after the war ended, the sisters left the British shores to join their uncle in New York and start life anew.

Now many decades later, veteran broadcaster Sir Attenborough, 94, has revealed that he hosted a reunion last July for the sisters’ descendents.

Describing it as ‘an unforgettable afternoon’, the natural historian modestly told The Sunday Times:  ‘I feel sort of inhibited about revealing it all because it’s nothing to do with me — it’s a credit to my parents.’

Helga’s daughter, Beverly Rich, 58, added: ‘I think the gravity of the visit really didn’t hit me or David until we were saying goodbye and hugging, because he was very modest and saying, ‘It’s really my parents’, and was not taking any type of accolade or responsibility.

‘I think when he looked at all of us leaving, it hit him that we would probably not have existed if it was not for the humanitarian kindness of his family.’

Helga’s daughters have since given her diaries, letters sent via the Red Cross and other personal papers in a long-term loan to Leicester University, in a bid to ensure the actions of the Attenborough family are recorded for posterity.

After the war, the bonds between the girls and the Attenboroughs remained strong, with one of Helga’s daughters, Hilary Waldman, 71, recalling how Lord Attenborough invited them to his film premieres in New York. 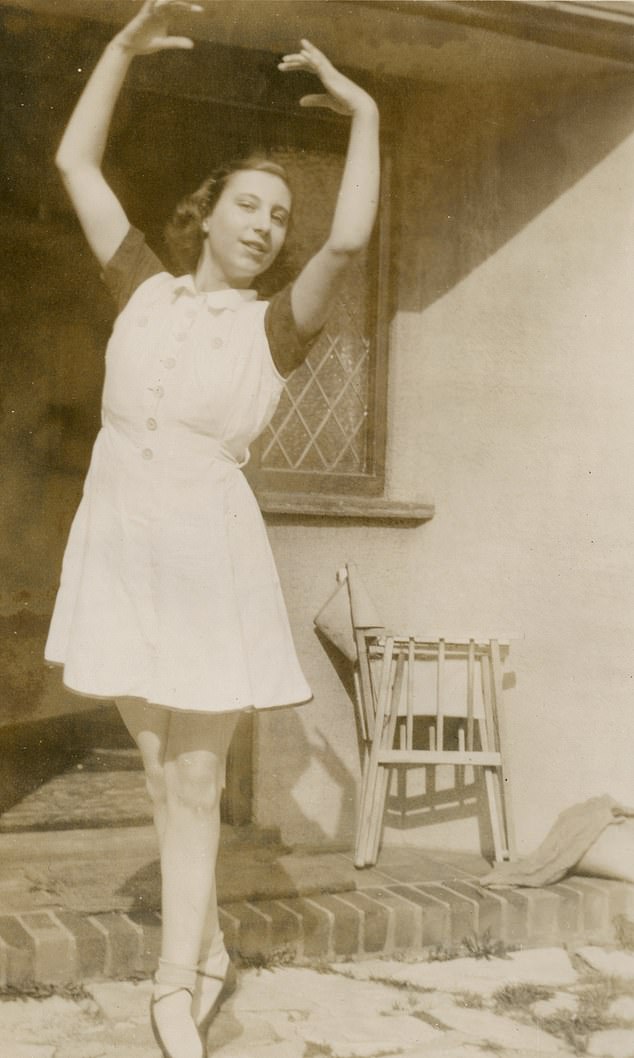