Even in lockdown, Sir David Attenborough’s passion for conservation is as fierce as ever.

The great naturalist is looking somewhat windswept, but as he introduces a BBC report on a major new study into the state of the world’s species, he is brimming with energy.

Despite the stark data, he insists we have time to reverse a looming eco-catastrophe if only we have the will.

Extinction: The Facts is an hour-long BBC1 documentary assessing the crisis in the world’s different habitats and the eight million species that share the planet.

Sir David Attenborough is set to present Extinction: The Facts, an hour-long BBC1 documentary assessing the crisis in the world’s different habitats and the eight million species that share the planet (pictured: file photo)

It draws on last year’s United Nations report, the most comprehensive of its kind ever, that warned one million of those species are heading for extinction – namely, a quarter of all animal and plant species, and 10 per cent of insect types.

Sir David urges us to treat this as an opportunity to redress the balance. ‘We have a moment when we can change our world and make it better. This is that moment,’ he says, referring to the changes being forced by Covid-19.

‘I believe that together we can create a better future. If we make the right decisions at this critical moment, we can safeguard our ecosystems and biodiversity. What happens next is up to each of us.’

To illustrate his point he harks back to filming Life On Earth in the late 70s. ‘It was one of my most memorable experiences.

‘I was in the Virunga mountains, which straddle the borders of Rwanda, DR Congo and Uganda, and met some of the few remaining mountain gorillas – including a mischievous youngster called Poppy.

‘As I prepared to talk to camera, Poppy was at my feet, trying to take off my shoes. The experience has stayed with me, but it was tinged with sadness as I thought I might be seeing some of the last of their kind.’

The mountain gorilla population there at that time was 250, putting them close to extinction, as their forest habitat was being ripped down to make way for agriculture.

But the gorillas could also be a valuable resource, bringing tourism and investment.

The three national governments worked with conservation organisations and local communities to wipe out poaching. 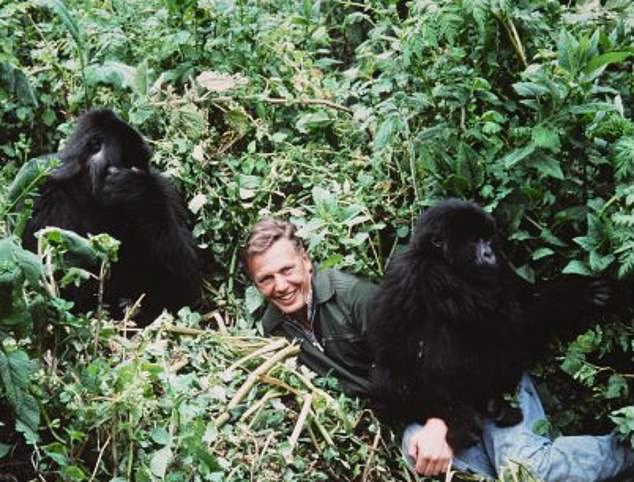 More than 700 rangers now patrol, the habitat is no longer being converted for farming – and the number of gorillas has risen to 600. But the abundance of life is vanishing.

The population of wildlife species has, on average, declined by 60 per cent since 1970, while humans have more than doubled to almost 8 billion.

But it’s not just our sheer numbers that do the damage – thoughtless consumption is equally harmful.

‘We waste about 40 per cent of the food we produce. If we could reduce that it would go a long way to creating a sustainable agricultural system.’

Biodiversity is shrinking fast in Britain. Anyone who drove in the 70s will remember having to stop every 100 miles or so to clear the windscreen of splattered bugs.

Now, that problem has gone – a dire indication that there are far fewer insects.

They were a vital part of the food chain for birds and small mammals, and also essential for pollinating plants. Most have been killed off by pesticides.

Globally, about half a million insect species are threatened with extinction.

‘If we don’t act now,’ says Kathy Willis, Professor of Biodiversity at Oxford, ‘the youth of today are going to look back on this generation with absolute horror and say, “What were you thinking?”

For some species it’s already too late. There are only two northern white rhinos left, and both are female: Najin, 31, and her daughter Fatu, 20. 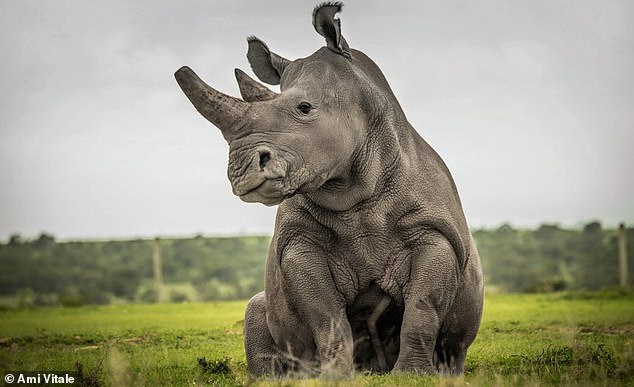 For some species it’s already too late. There are only two northern white rhinos left, and both are female: Najin, 31, and her daughter Fatu, 20, pictured

Ranger James Mwenda cares for them at a reserve in Kenya; Najin is easy-going, but Fatu is more demanding. ‘She’s like a human teenager,’ he says.

‘She can be feisty, when she wants something.’

The wild population, which numbered thousands in the 60s, was slaughtered by hunters, and when Najin and Fatu are gone the species will be extinct.

We’ve known marine life has been under pressure for years too, but Sir David’s 2017 series Blue Planet II revealed the full extent of the threat to our oceans’ biodiversity.

Overfishing and pollution are major problems.

Off the west coast of Scotland a long-established pod of killer whales has just eight members left, and no calf has been seen among them for nearly 30 years.

When one of the whales, Lulu, was washed ashore in 2016, scientists found sky-high levels of PCBs – toxic chemicals found in plastics – had rendered her infertile.

It’s a stark illustration that climate change is not the only threat to our ecosystems, and that the future health of the planet lies in our hands.