Sir David Tang: The man who knew absolutely everyone

He was the best-connected man in London and counted the Duchess of York and Kate Moss as close friends — so how fitting that when Sir David Tang, who founded The Dorchester restaurant China Tang and fashion brand Shanghai Tang, died on Tuesday aged 63, he should receive such glowing tributes from society’s most eminent movers and shakers.

David Cameron’s mother-in-law Annabel Astor hailed him as ‘a great life enhancer’ while comedian David Walliams called him ‘a legendary wit. It was a party to be near him’. Hollywood paid homage via actor Russell Crowe: ‘The privilege was mine. Witty, charming, intellectual, salacious, hilarious, loving and funny as f***.’

Sir David Tang is knighted for charitable services by the Queen. The prominent entrepreneur, a friend of the royals and celebrities has died aged 63 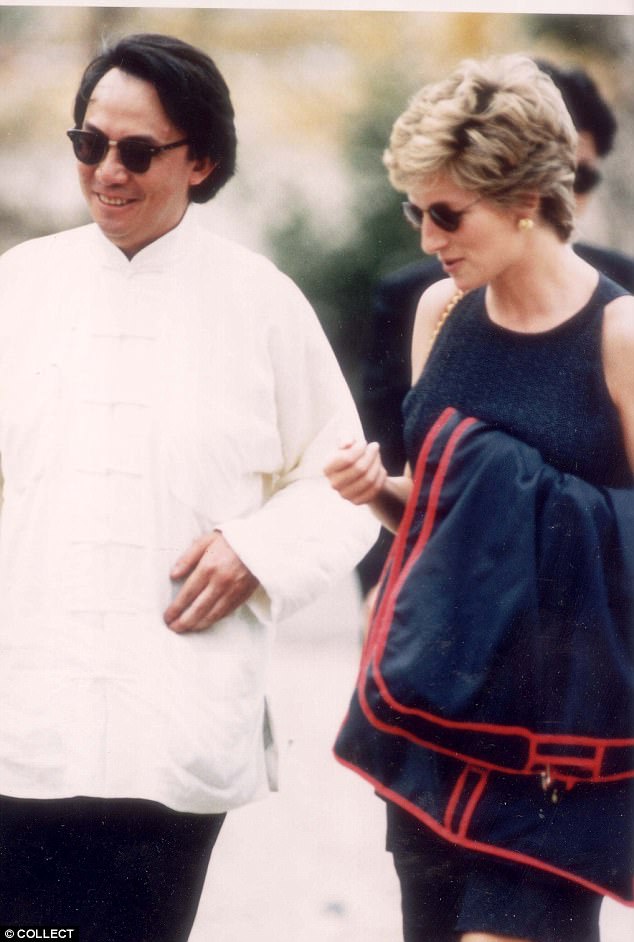 Sir David is seen with Princes Diana. He was widely seen as the best-connected man in London and founded The Dorchester restaurant China Tang and fashion brand Shanghai Tang 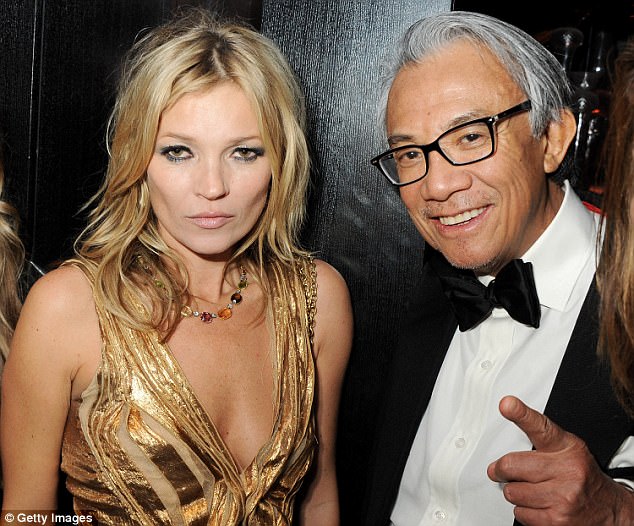 Fashion favourite: Supermodel Kate Moss holidayed with Sir David and Sarah Ferguson aboard a yacht off the coast of Greece just last year

Sir David, who described himself as ‘everyone’s token Chinese friend’, planned to throw a ‘farewell to life’ party at The Dorchester after receiving news he had just months to live following a battle with liver cancer. ‘I thought the best way to go would be to give a party where we can see each other one more time, rather than at a memorial service where I shall be dead as a dodo,’ he said. The celebration was to due take place at the Mayfair hotel on September 6, but sadly he didn’t make it. So who was Sir David? Tang arrived in the UK from Hong Kong at the age of 13, speaking no English.

He was educated at the Perse School in Cambridge, where he failed his English O-level six times (despite passing Latin, French and Russian), then King’s College London, where he read philosophy, then law.

High rollers: Partying with Jerry Hall in London in 2013, left, and cosying up to actress Sienna Miller

Algy Cluff, the legendary oil and mining tycoon, was an early employer. He tells an illuminating tale about the first time Tang invited him to dinner. ‘I thought it slightly strange, my most junior employee inviting me to dinner, but when I arrived, there was the Attorney General [at that time Lord Havers] and the Lord Chancellor and a crowd of important people. Over dinner, Lady Havers said: “It must be wonderful, working for David.” ’

In London, Tang developed a gambling habit which almost destroyed him. But his luck improved in the mid-Eighties after he befriended Fidel Castro and secured an exclusive licence to distribute Havana cigars to all the countries of the Pacific rim. Sir David went on to make a fortune from the Shanghai Tang fashion label, selling it in 2006. 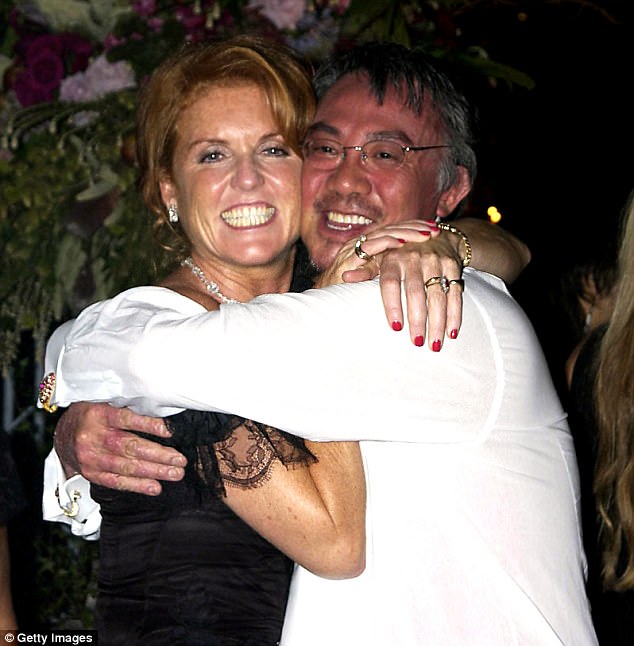 Beloved: The Duchess of York cuddles up to her ‘Tangito’, with whom she shared a close friendship for 30 years 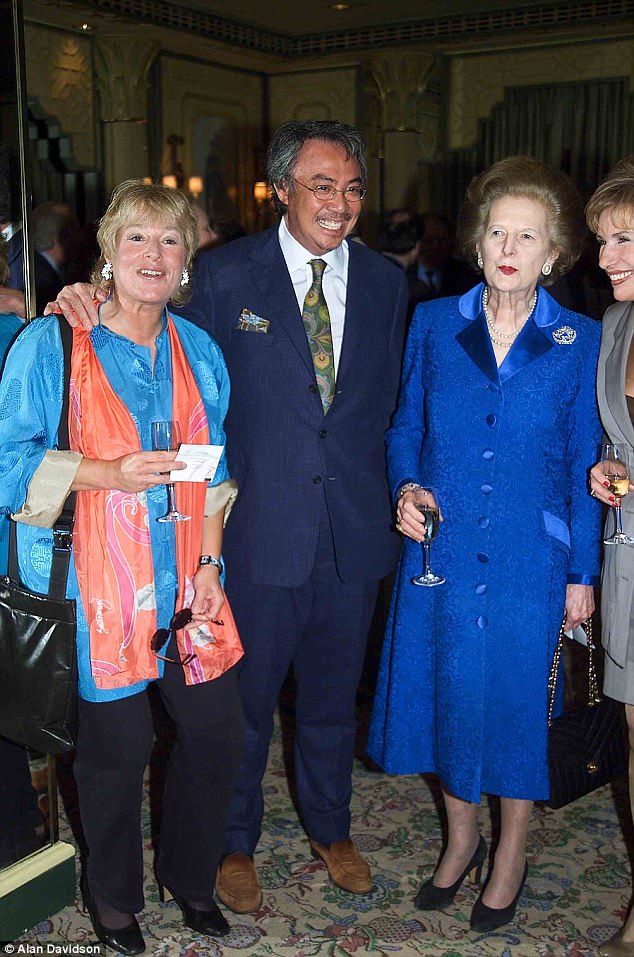 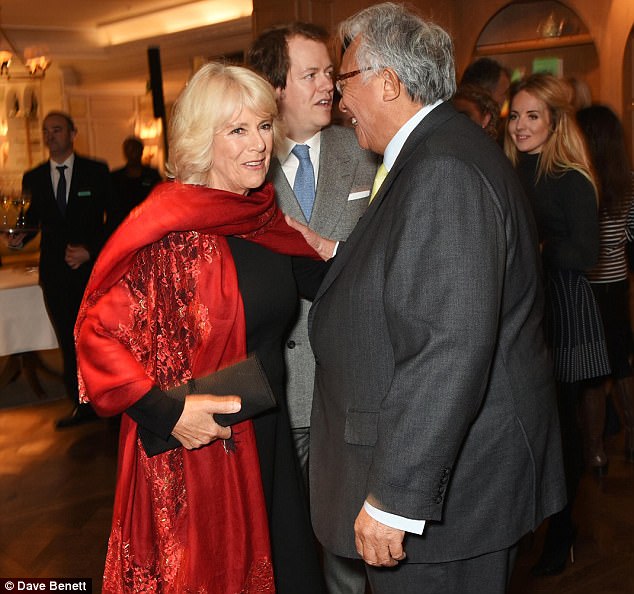 An art lover, philanthropist and Financial Times agony uncle, he was once Hong Kong’s Honorary Consul to Cuba and excelled as a raconteur. He once recalled having accidentally slept with Tracey Emin on board a boat in the Adriatic. ‘I saw the face of Tracey Emin from her parting hair. “What the devil are you doing here,” I slightly screamed. “I don’t know!” she replied, jumping out of my bed with a sheet around her.’

Although he denied he was a playboy (‘no playboy gets up at 6.30am and gets to his office at 7’), he knew how to charm. Both Naomi Campbell and Wonderbra model Eva Herzigova, 44, visited him in hospital before his death. ‘I was looking forward to this embrace and smile all summer long,’ said Eva.

Sir David married Hong Kong actress Susanna Cheung, with whom he had two children, Victoria and Edward. He was introduced to his Essex-born second wife, Lucy, a paint manufacturer’s daughter, by Tania Foster-Brown, once an aide to Sir Philip Green. The couple married in 2003 after a seven-year engagement.

Someone once said of Tang that he was far more interesting than he pretended to be, which might explain his popular appeal. 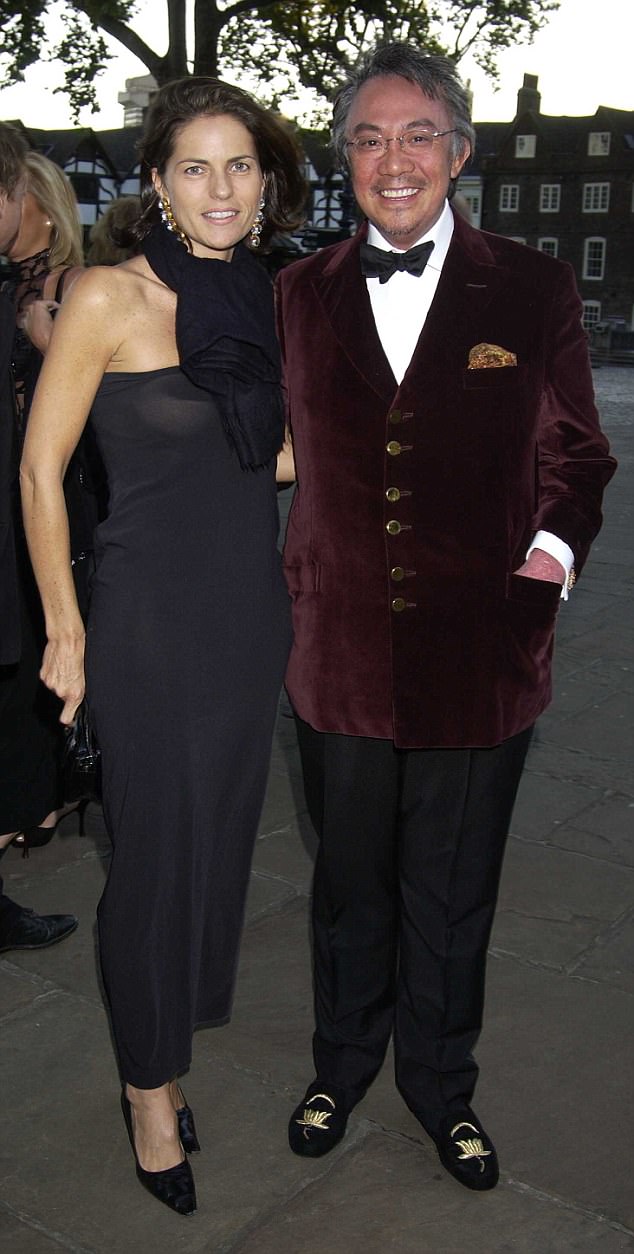 Soulmates: With second wife Lucy. They met through an aide to Sir Philip Green 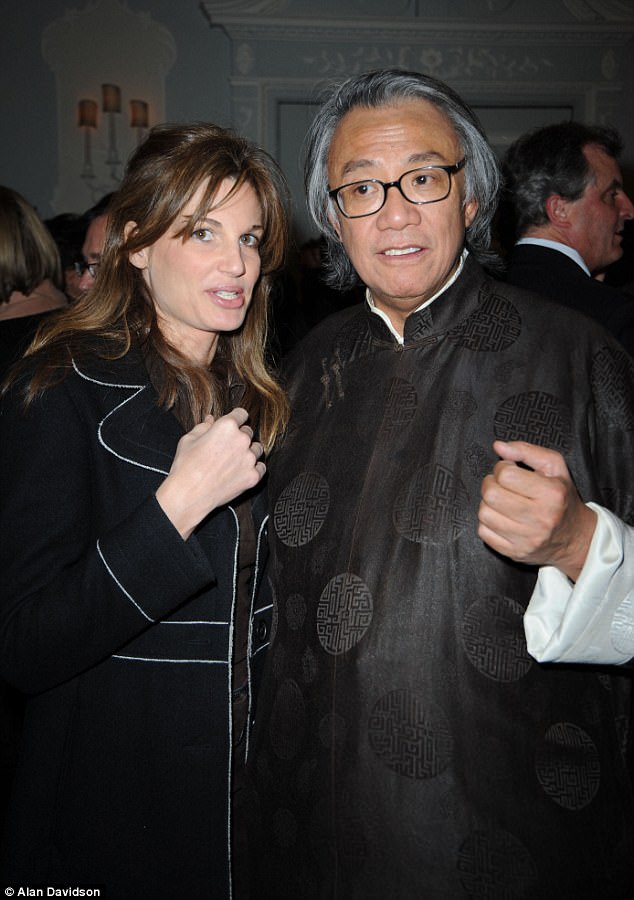 Sir’s soiree: At a 2008 party to celebrate his knighthood with Jemima Khan 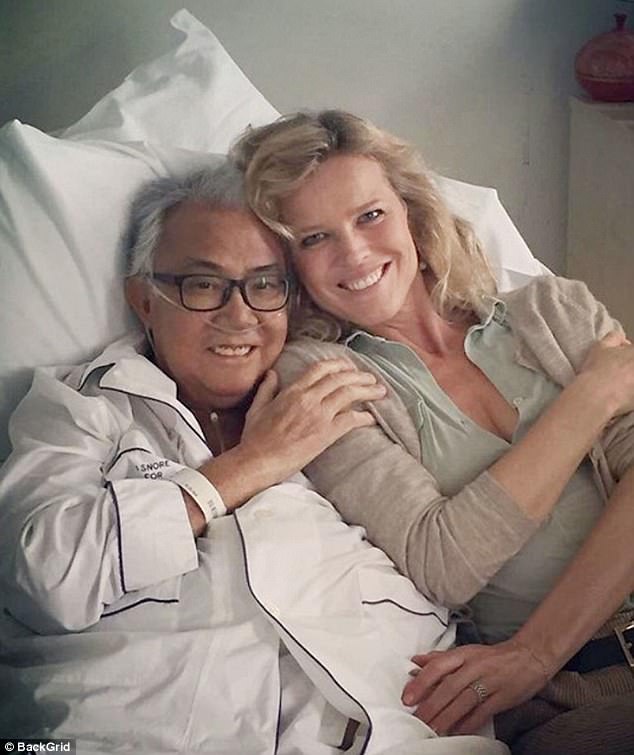 He retained his sense of humour to the end and last year published Rules For Modern Life, which offered entertaining fashion tips. ‘I find flip-flops highly unsavoury. Flip-flops and short trousers with hairy shins is absolutely disgusting. You don’t really want to show your toes to people, unless you are Jesus Christ.’

Tang remained a devoted friend of Fergie even when she was ostracised by the royals. She joined Tang and Kate Moss on a yachting holiday last year in Greece.

Yesterday, Fergie expressed her admiration for the man she dubbed ‘Tangito’. ‘I have known him for 30 years, and we laughed, we cried, and we lived every moment. He made castles in the sky for my girls and me, we travelled the world together with him and his steadfast and devoted Lucy by his side.

‘He was my brother Sun and I was sister Moon. To have known David has changed my life. Every time he played the piano or recited a poem, I cried with admiration.

‘To Lucy, you were the blood in his veins and he loved you with all his heart, and you have been the most loyal wife and you made Tangito walk on and walk tall. He was so proud of Edward and Victoria and his little grandson Rocco.

‘Go in peace Tangito, and thank you for our castles in the sky.’