Sir Elton John was dressed to impress as he headed out for lunch in Cannes with his family on Friday as they continue their sun-soaked break in the South of France.

The music icon, 74, stepped out wearing head-to-toe Gucci as he was seen heading out on yacht following a lavish lunch at a local restaurant.

Heading out onto the water to kick back on their luxury vessel, Elton was seen getting a helping hand as he boarded a smaller boat alongside his two sons Zachary, 10, and Elijah, eight.

Dressed to impress: Sir Elton John, 74, was dressed to impress as he headed out for lunch in the sunshine in Cannes on Friday while head-to-toe in designer wear from Gucci

The Crocodile Rock hit-maker embraced the warmer temperatures overseas and was seen sporting a striped polo shirt and complementing white designer shorts for the outing.

Elton added a pair of patterned Gucci plimsole trainers to his outfit and finished off his casual look with his trademark pair of blue-tinted sunglasses and silver jewellery, including two large rings on his fingers and a chunky watch.

The legendary singer was seen sporting a face covering over his mouth in adherence to local Covid-19 protocols, with masks being required while out and about in the local area.

He was joined by husband David who cut a smart figure in a tailored navy shirt and striped swim shorts. 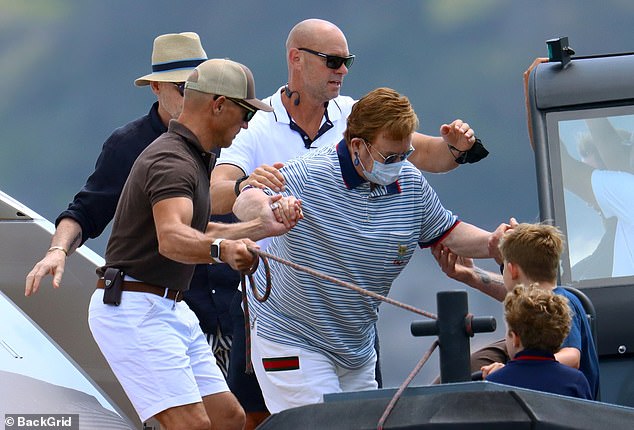 Helping hand: The music icon enjoyed lunch at a local restaurant with friends before heading out to board a yacht for the afternoon (pictured above with two sons Zachary and Elijah) 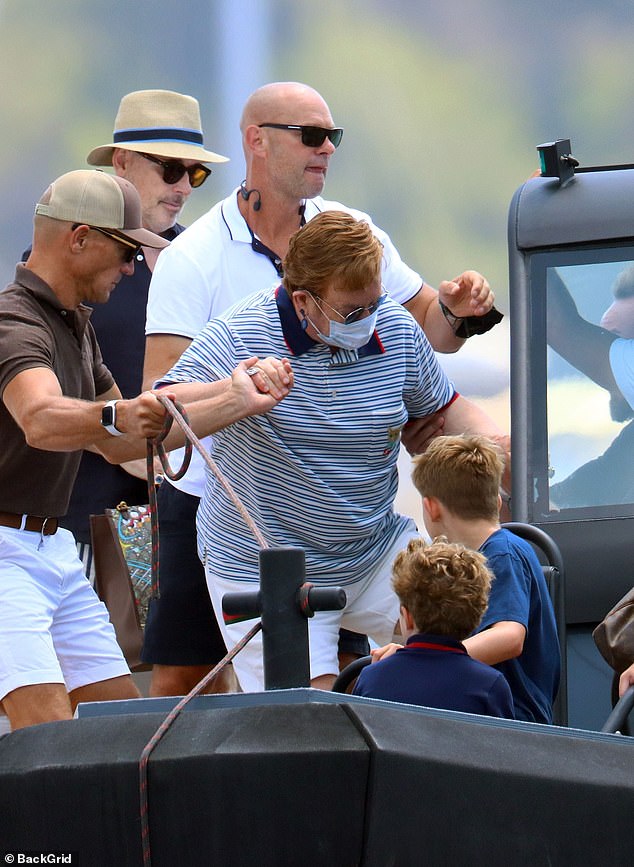 Summer break: Sir Elton is currently holidaying in South of France with husband David Furnish (second from left) and their two sons Zachary, 10, and Elijah, eight 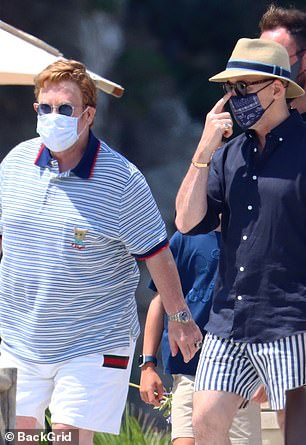 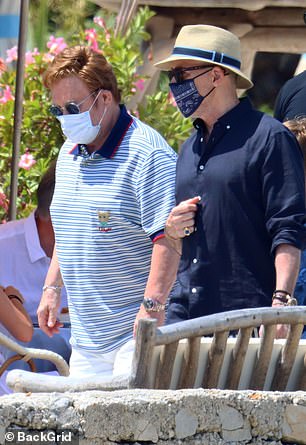 Casual: The Crocodile Rock hit-maker stepped out sporting a striped polo shirt and white shorts, while David cut a smart figure in a navy shirt 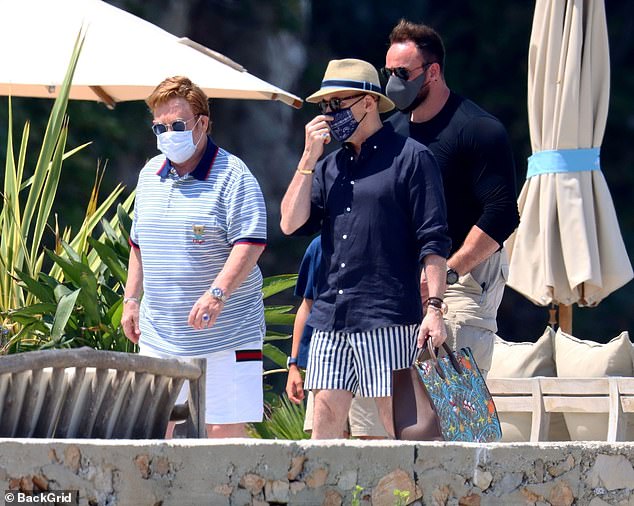 Masking up: Both Sir Elton and David were sporting masks in adherence with Covid-19 protocols in place in the local area that require masks to be worn

David sported dark shades and a mask to match his outfit, while wearing a straw hat and carrying the family’s beach essentials in a floral patterned tote bag.

Canadian filmmaker David and Elton entered into a civil partnership in December 2005, before tying the knot when same-sex marriage became legal in England and Wales in March 2014.

They welcomed their oldest son Zachary in 2010 via surrogacy and Elijah in 2013 via the same surrogate.

Following their meal, the pair and their friends spent the afternoon indulging in some R&R onboard a yacht. 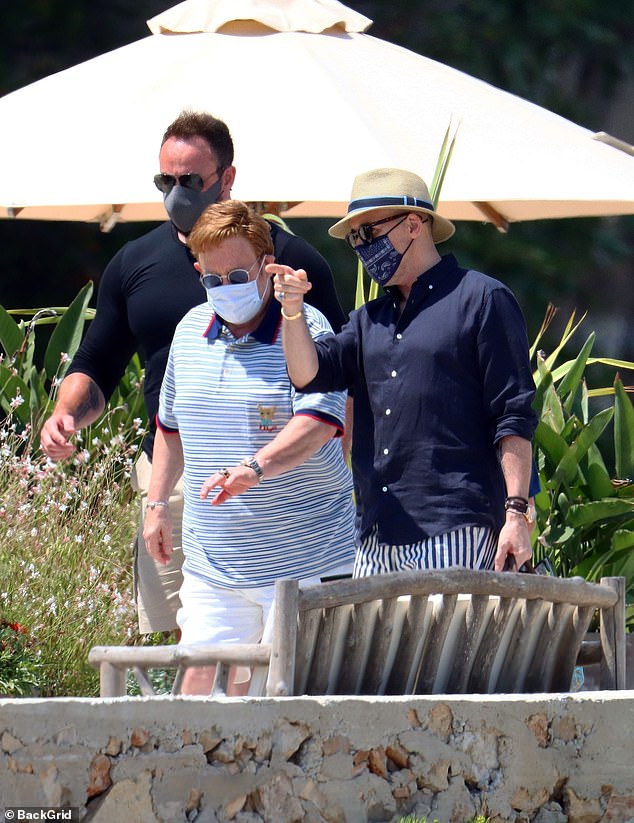 Trademark: Sir Elton wasn’t without his usual shades and rocked a pair of blue-tinted sunglasses, as well as a chunky silver watch on his wrist 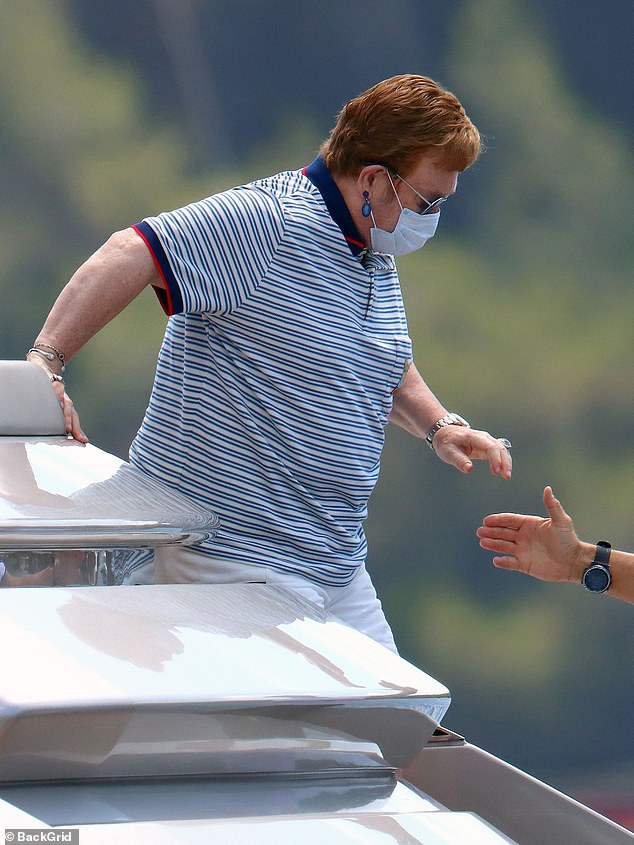 Relaxed: The legendary singer seemed at ease as he kicked back with his family and friends 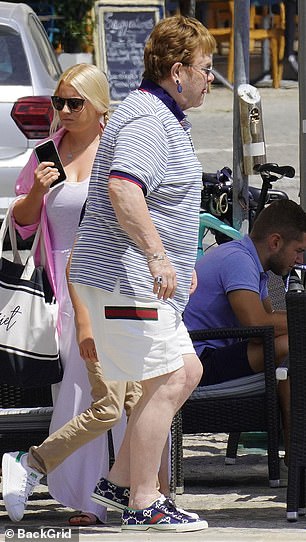 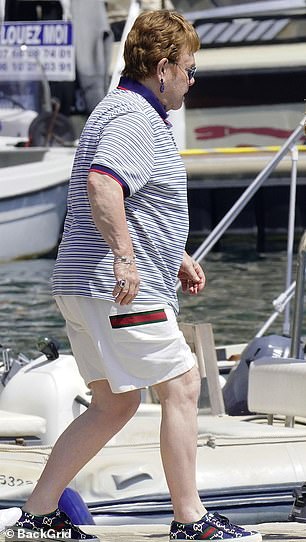 It’s all in the details: Sir Elton showcased his love for quirky fashion as he rocked a funky pair of patterned designer plimsoles for his day out in Cannes 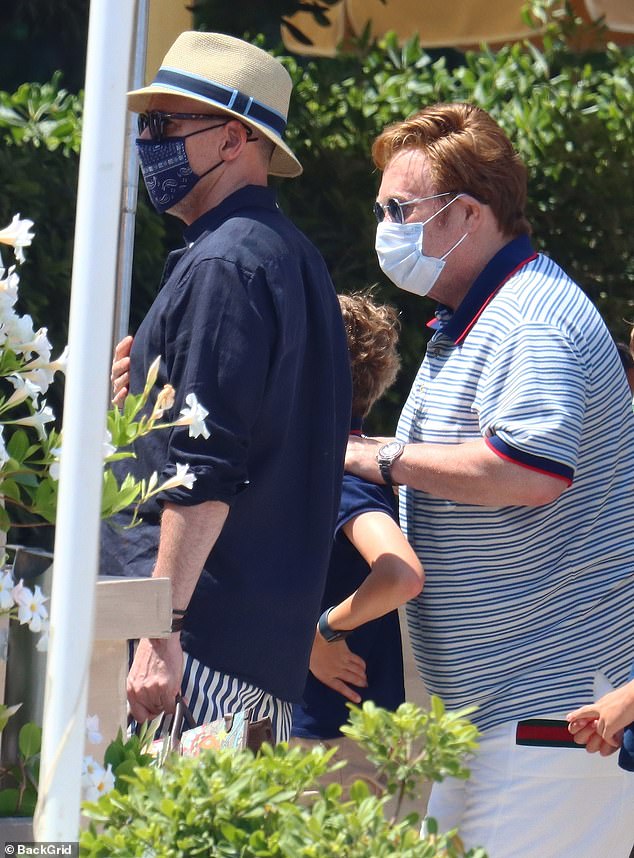 Family vacation: Sir Elton seemed at ease as he spent quality time with his nearest and dearest

Elton and David often spend the summer months in the South of France, thanks to owning their home, Castel Mont-Alban, which overlooks Nice on the French Riviera.

He bought the Belle Epoque villa surrounded by the green spaces of Mont Boron in the 1990s and locals have described it as the ‘Bel Air of Nice’ thanks to the concentration of multimillion-pound mansions in the area.

The property is just a 20-mile drive away from Cannes, where the annual film festival is held, and he is said to enjoy tending to his plants in the garden of the property, according to the Hollywood Reporter.

Sir Elton has previously hosted the likes of David and Victoria Beckham, who he is good friends with, comedian David Walliams and actor couple Neil Patrick Harris and David Burtka at his home, which was once dubbed his ‘Pink Villa’.

Built in the 1920s, the home was adapted by Sir Elton with designers Fred Dilger and Monique Gibson.

The pool now features Egyptian Deco statues of the four seasons, while his bedroom has an Andy Warhol panting, and the property features a tower room overlooking the Mediterranean. 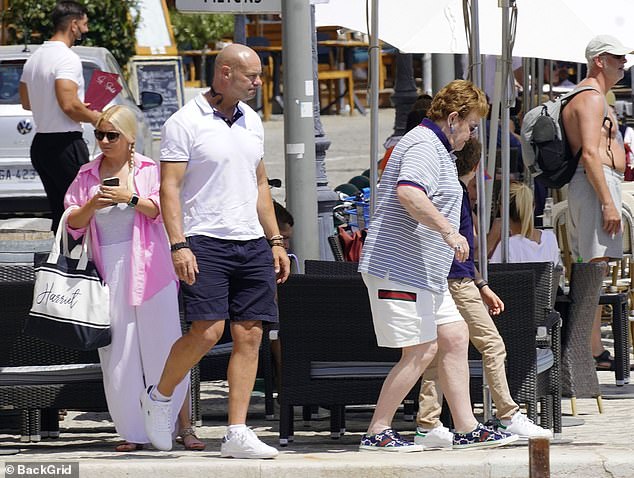 Firm favourite: He is often spending the summer in France with his family and owns a lavish home in Nice, which is a 20-minute car ride away from Cannes 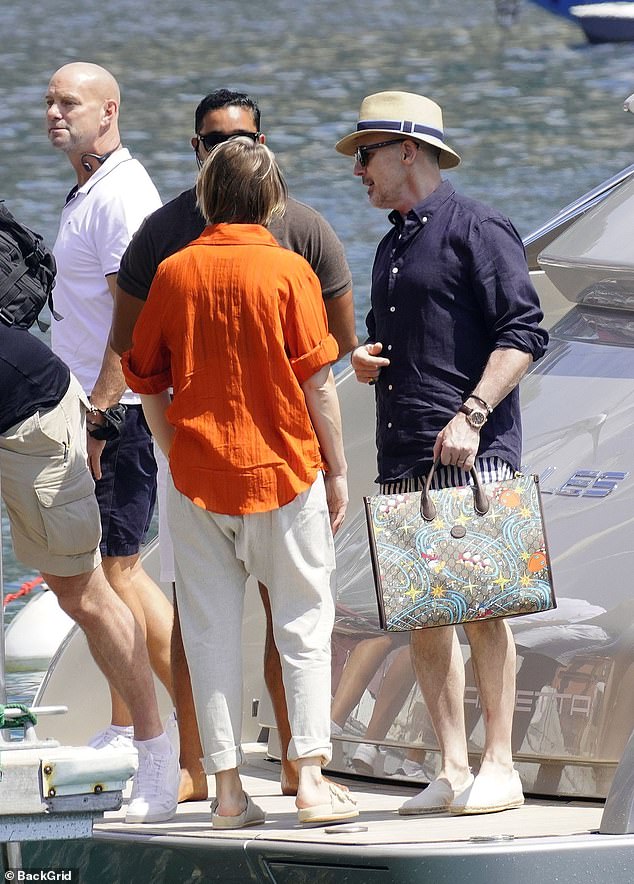 Ready to go: David seemed to be in charge of the group’s beach essentials as he carried a large floral tote bag onto the boat that was waiting for them

Taking charge: Sir Elton led the way as his family and friends boarded a smaller boat to transport them over to the yacht in the open water 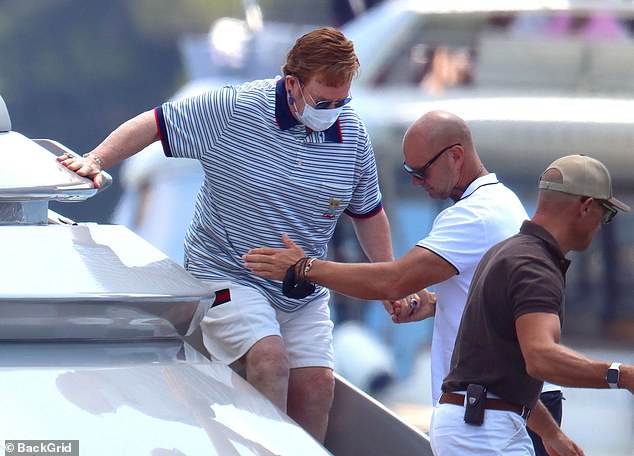 No expense spared: He pulled out all the stops for the group’s relaxing day out as he rented a yacht to take them for a ride for the afternoon 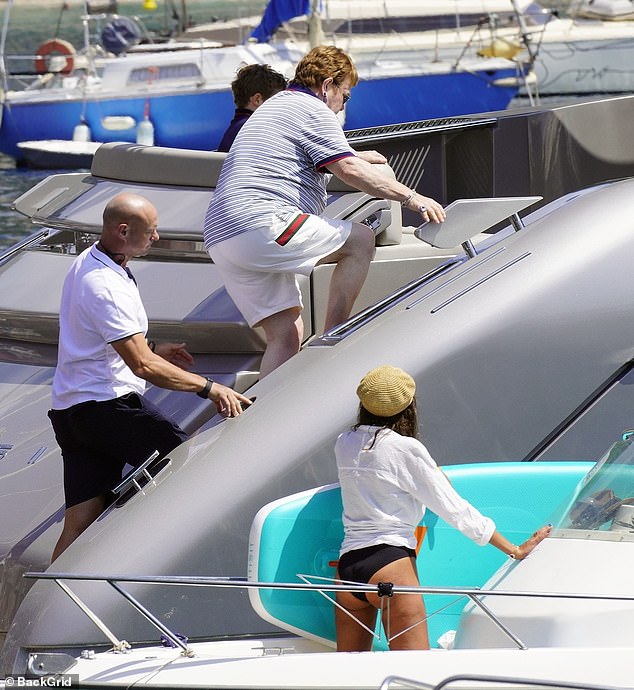 Wish you were here: Elton was seen climbing up to the yacht’s top deck to bag the best seat in the house as the group set sail 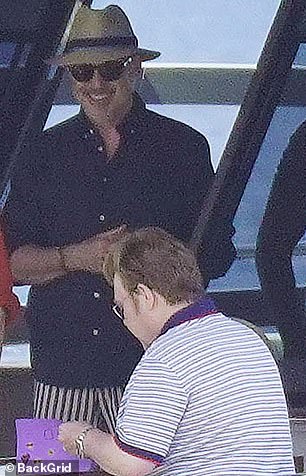 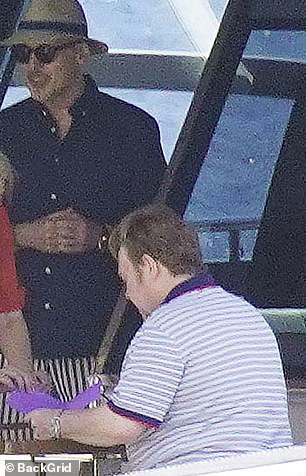 Kicking back: Sir Elton and husband David were seen laughing as they relaxed on board

Sir Elton isn’t the only celebrity who has been known to frequent Nice.

The French city is considered a playground of the rich and is a favourite among stars including actress Dame Joan Collins, U2 frontman Bono, Microsoft founder Bill Gates, actor Sean Connery and singer Tina Turner.

Sir Elton’s trip overseas comes after he was seen getting into the football spirit with his family during England’s successful stint at this summer’s Euros 2020 championship.

The England team made it all the way to the final – their first final in 55 years since winning the World Cup in 1966 and their first ever final in a European tournament.

Elton had tuned in to watch the national side take on Italy at Wembley Stadium in a nail-biting final that saw them heartbreakingly lose out on the title in a penalty shootout.

Sharing a snap of him settling in with his sons to watch the game to Instagram, Sir Elton revealed he was rooting for England as he captioned his post: ‘Come on England!!!! #itscominghome #finalcountdown #euro2020.’ 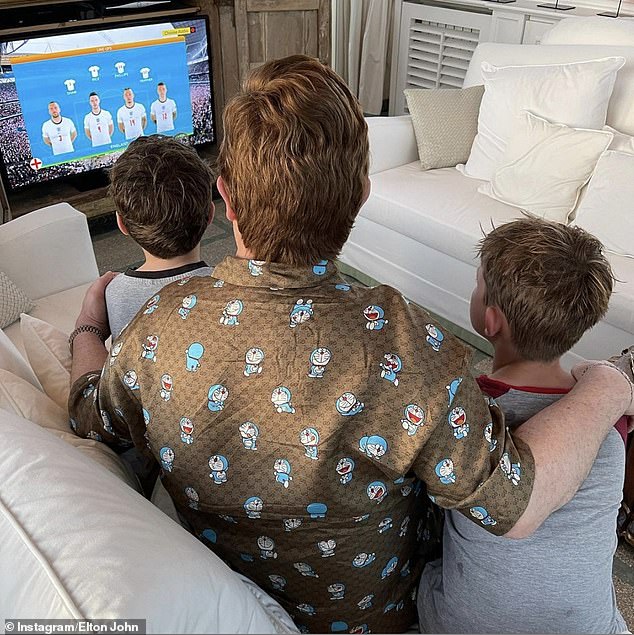 Rooting for you: Sir Elton’s trip away comes after he was seen getting into the football spirit with his boys to cheer on the England team during this summer’s 2020 tournament