When the actor David Niven was buried in Switzerland, the largest wreath was sent by British Airways staff with a note inscribed: ‘He made a porter feel like a king.’

Members of the House of Commons may feel similarly disposed towards Geoffrey Cox, he of the basso profundo voice and swooshy theatrical rhetoric.

In a Cabinet of faceless dullards, the Attorney General radiates the sort of grace and old-school charm now sadly lacking in modern politics.

He treats legal queries from his peers with the gratitude and deference of a bowing and scraping Abyssinian courtier. Some ministers work for the Prime Minister. Mr Cox (Sir Geoffrey before long, surely) is very much one who serves her.

The QC travelled to Brussels this week on Mrs May’s behalf in a last-ditch attempt to seek a supplementary agreement on the Irish backstop.

In a Cabinet of faceless dullards, the Attorney General radiates the sort of grace and old-school charm now sadly lacking in modern politics, says Henry Deedes

Or as Brexiteers have dubbed it, ‘Cox’s codpiece’.

It is relatively uncontroversial to say that his mission was not a soaraway success.

In fact, not since Jack the giant-slayer returned from the market with a punnet of magic beans in exchange for the family moo has any negotiation been deemed so disappointing. Lesser souls would have been ripe for humiliation.

And yet there Sir Geoffrey was at Attorney General’s Questions yesterday, presiding over the chamber with such kingly grandeur it was as though he were draped in ermine. How he delights the House with his stately munificence. How he endears himself to all sides with his archaic courtesy.

Questions aplenty on the backstop. Helen Goodman (Lab, Bishop Auckland) wanted to know whether the Government was still seeking change to the EU’s Withdrawal Agreement.

Sir Geoffrey said they were but he had not yet been satisfied. Or as he put it: ‘I am concerned to ensure that what is inside the codpiece is in full working orderrrrr!’

Hilary Benn (Lab, Leeds Central) had a fiendishly convoluted query about the backstop’s mechanism way beyond my legal understanding. Sir Geoffrey generously acknowledged he could see he was dealing with a Parliamentarian worthy of his name.

‘That is a question,’ he purred, his arrows narrowing, his voice descending a further semitone, ‘I would have expected from such a sophisticated Select Committee chair.’ 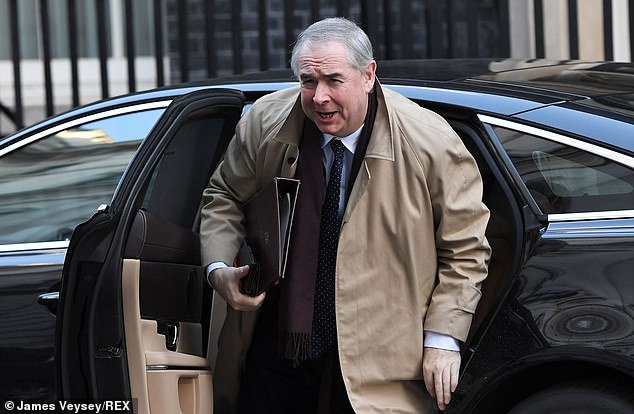 There Sir Geoffrey was at Attorney General’s Questions yesterday, presiding over the chamber with such kingly grandeur it was as though he were draped in ermine

Mr Benn beamed back at him like an infant awarded an extra ration of sweeties. Mark Francois (Con, Rayleigh and Wickford), a geezerish rabble-rouser noted for his rampant Euroscepticism if not always his eloquence, wasn’t keen on Sir Geoffrey negotiating with Brussels while also acting as the Government’s legal adviser.

This would effectively mean he would be marking his own homework if he wrung any changes out of them.

Mr Francois concluded: ‘He will end up examining his own codpiece in front of the House of Commons.’

Gadzooks! Sir Geoffrey’s eyebrows hopped like a pair of jumping slugs. The law is law, he replied, sucking his gums. There are many lawyers – ‘Too many!’ yelled shadow arts minister Kevin Brennan – capable of deciding whether he had got his judgment right or wrong.

The Attorney General spun to face colleagues, he slapped the despatch box, he waved his half-moon specs with a baroque swish of the wrists. All the while his swotty frontbench opponent Nick Thomas-Symonds (Lab, Torfaen) politely bobbed along in his wake like a skiff trailing an oil tanker.

Towards the end, Philip Hollobone (Con, Kettering) asked about reviewing the Treason Act which he suggested might be applied to British citizens who elope to fight with IS.

It was mildly reassuring to see his suggestion provoked almost zero enthusiasm.