Sir Keir Starmer today refused to tell teaching unions to step up their efforts to help reopen the nation’s schools as Gavin Williamson said parents who refuse to send their children back to the classroom will face fines.

The Labour leader accused ministers of being ‘asleep at the wheel’ over the delayed return of schools as he claimed there had been a ‘total lack of planning’.

He said the swift construction of Nightingale emergency hospitals during the coronavirus crisis showed ministers could have established temporary classrooms if they had wanted to and that all children should already have been back.

But he risked accusations of hypocrisy as he declined to instruct unions to reduce their opposition to the Government’s reopening plans.

Asked if he was willing to tell unions it is safe for children to go back to school and that they should ‘get on and help’ make it happen, he appeared to dodge the question as he said: ‘I want as many children back in school as swiftly as possible and let responsibility lie where it should lie here.’

His comments came as Mr Williamson, the Education Secretary, said parents could be fined if they do not send their children back to school.

He also announced this morning he will publish a plan this week setting out how he intends to get every pupil in England back in the classroom in September.

It came as Boris Johnson unveiled a decade-long schools rebuilding strategy which will see £1 billion injected into new construction work and another £560 million into school repairs.

Many primary schools in England have already welcomed back pupils in reception, year one and year six.

But the Government was forced to drop its ambition to get all primary year groups back before summer.

Meanwhile, secondary schools remain largely shut with only some pupils in year 10 and year 12 allowed to meet with teachers before the summer holidays ahead of exam years.

The Government is now targeting a full return of all schools in September.

Mr Williamson told LBC that going back to school will be compulsory and that fines could be issued to parents who keep their children at home because of safety fears.

He told LBC: ‘It is going to be compulsory for children to return back to school unless there’s a very good reason, or a local spike where there have had to be local lockdowns.

‘We do have to get back into compulsory education as part of that, obviously fines sit alongside that.

‘Unless there is a good reason for the absence then we will be looking at the fact that we would be imposing fines on families if they are not sending their children back.’

Mr Williamson was asked during an interview on BBC Radio 4’s Today programme if there will be a ‘detailed plan’ for a full reopening in September published this week and he replied: ‘There will.’

Asked if it will spell out exactly how schools will achieve full attendance in September, he said: ‘Yes, it will. As both the Prime Minister and myself have made clear that we are going to be seeing the full return of all children in all year groups to our schools, whether that is primary, whether that is secondary, whether that is further education colleges.

‘Because we realise and understand the real importance that children get and benefit from being in school.

‘But we want to see every child back in school getting their education.’

Mr Williamson would not be drawn on the approach which will be taken in the plan to social distancing.

The current two metre social distancing rule means many schools simply do not have enough space to welcome back more than a fraction of their pupils.

Sir Keir said that every student should already have been back at school as he blasted the Government’s handling of the issue.

He told Sky News, he said: ‘There has been a total lack of planning. From the day the schools were shut down, it was obvious what needed to happen to get them back open again.

‘You needed a risk assessment, and you needed to look at the space. I’ve talked to loads of headteachers, and the points they have made to me were obvious and practical and could have been overcome.’

‘Had there been work on this from the day the schools closed down, I genuinely think we could have had all our children back in school by now.

‘But the Government was asleep at the wheel, didn’t get to this until too late in the day, and now we’re in the situation where children will be able to do other things this weekend, but not be in school on Monday.’ 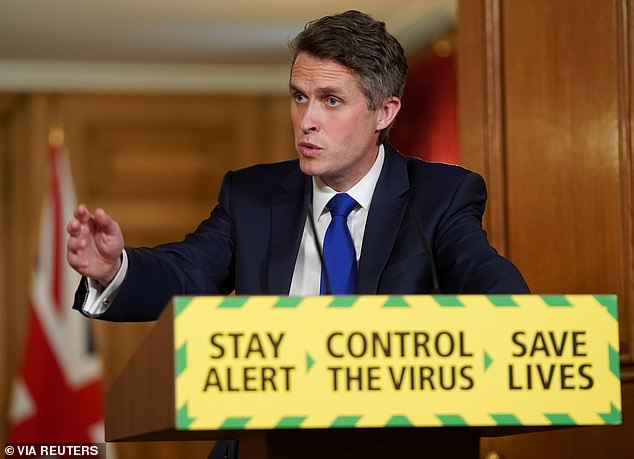 Setting out the Government’s schools spending announcement overnight, Mr Johnson said: ‘All children deserve the best possible start in life – regardless of their background or where they live.

‘As we bounce back from the pandemic, it’s important we lay the foundations for a country where everyone has the opportunity to succeed, with our younger generations front and centre of this mission.

‘This major new investment will make sure our schools and colleges are fit for the future, with better facilities and brand new buildings so that every child gets a world-class education.’

Details of the programme, along with eligibility for funding, will be laid out in full at the next Spending Review, according to Number 10.

Investment will be targeted at school buildings in the worst condition across England – including ‘substantial investment’ in the north and the Midlands.