Topshop tycoon Sir Philip Green could sue ex-colleagues if they have defied gagging orders over claims he sexually harassed, bullied and made racist remarks towards staff

By Helen Cahill For Mail On Sunday

Topshop tycoon Sir Philip Green is considering hitting former colleagues in the pocket if it emerges they breached confidentiality agreements over allegations that he sexually harassed, bullied and made racist remarks towards staff.

The Mail on Sunday understands that the billionaire retail boss and his advisers are looking at whether non-disclosure agreements (NDAs) have been breached.

Sir Philip could seek to recover the money he paid to claimants as part of those agreements. In some cases, former staff who signed NDAs after making allegations were paid more than £1 million.

The tycoon faced claims yesterday that he groped women, put one senior executive in a headlock and told a black man that he was ‘still throwing spears in the jungle’. 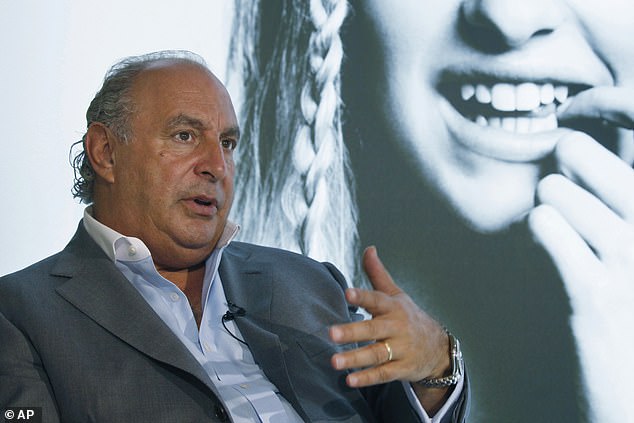 The allegations were revealed by The Daily Telegraph after Sir Philip abandoned High Court action to prevent the newspaper publishing them.

Last night, Sir Philip’s retail group Arcadia, which also owns fashion brands Dorothy Perkins and Burton, confirmed that he and the company were considering pursuing legal action against the individuals. None of the former employees concerned has been named publicly.

A spokesman for Arcadia said: ‘The NDAs were entered into willingly by individuals who received independent legal advice about their rights and responsibilities.

‘The judge has confirmed that these NDAs – and the confidentiality surrounding them – were legitimate.’ Five employees reportedly signed gagging agreements in exchange for payoffs. If Sir Philip does pursue legal action, it is likely to prove controversial.

Equalities Minister Penny Mordaunt has said the Government will tackle the abuse of NDAs, which are more commonly used to protect commercially sensitive information in business deals.

She said: ‘It is unacceptable that non-disclosure orders have been used to hide workplace harassment or intimidate victims into silence and we will take the necessary steps to stop this.’

The claims revealed in the Telegraph included a female executive receiving more than £1 million after complaining that Sir Philip groped her, and a second woman being given hundreds of thousands of pounds following complaints that he grabbed her face and made inappropriate comments.

A third woman alleged Sir Philip gripped her in a headlock and sexually harassed her, and that she was paid hundreds of thousands when she signed an NDA.

A black staff member also received a £1 million pay-off to keep quiet about alleged racial harassment, it is claimed.

According to the newspaper, Sir Philip criticised the executive, saying ‘everyone else is firing guns and you’re still throwing spears in the jungle’.

In October, he told The Mail on Sunday that he had indulged in no more than office ‘banter’, adding: ‘As far as I’m concerned that’s never been offensive.’ The nature of the cases Sir Philip might bring against former staff will depend on the terms of the NDA contracts they signed.

In some cases, signatories are barred from even discussing the existence of an NDA or the matters it relates to.

Sir Philip ended his legal battle with the Telegraph before the case was due to go to trial, allowing the billionaire to side-step an expensive and high-profile court case.

He has been ordered to pay most of the newspaper’s legal costs, along with his own, leaving him a bill of £3 million.

The Topshop tycoon’s efforts to stop publication suffered a major blow when Labour peer Peter Hain used parliamentary privilege to name Sir Philip as the mystery subject of a Daily Telegraph report which was billed as ‘the British #MeToo scandal’.