Sister of Sandy Hook victim hits out at politicians

The sister of a teacher who died protecting her students during the Sandy Hook shooting  has taken to task the political ‘leaders’ who let the same mistakes be made just five years later.

Carlee Soto, 26, lost her older sister Victoria Soto, then 27, in the Newtown, Connecticut massacre. On December 14, 2012, Victoria was one of 26 people shot and killed on the school grounds by Adam Lanza, who used a Bushmaster semi-automatic rifle similar to an AR-15. 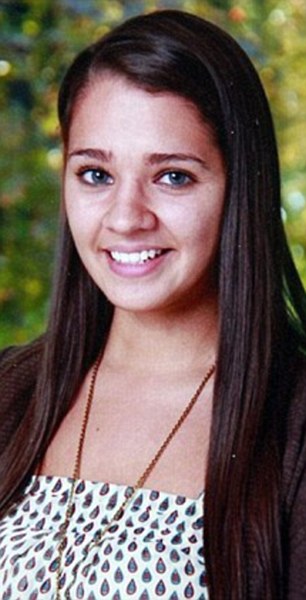 Taking action: In an op-ed, Carlee (pictured on the day of the Sandy Hook shooting) urged politicians to pass legislation making it possible to strip gun rights from dangerous people 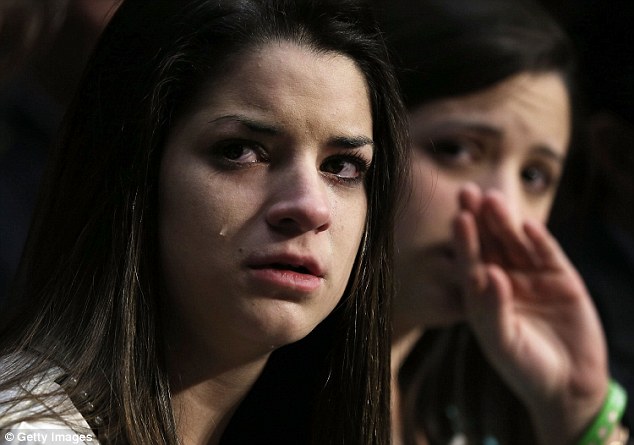 Heartbreak: In her candid essay, Carlee (pictured in 2013 at a hearing), who referred to her sister by her nickname, Vicki, said she misses her sister ‘every single day’

Five years after her sister’s death, the first thought that went through Carlee’s head when she heard about the Parkland shooting was ‘not again’, she recalled in an op-ed for Cosmopolitan.

‘I know what the families in Florida are going through, and my heart aches for them,’ she added.

‘The agony of trying to locate your loved one and the overwhelming heartbreak when the news is not what you were desperate to hear is something I—and they—will never, ever get past.’

In her candid essay, Carlee, who referred to her sister by her nickname, Vicki, said she misses her sister ‘every single day’.

‘I miss her at Christmas when our family has to celebrate without her,’ she wrote.

‘I miss her every time my son celebrates a milestone and I can’t call my sister to tell her all about it. I just miss her.’

Carlee, who is part of the Everytown network for gun safety, called for officials to take action to help prevent mass shootings.

She cited the Red Flag Laws passed by Connecticut as well as California, Indiana, Oregon and Washington, which make it possible to take away a person’s guns if they show signs of being dangerous. ‘I miss her at Christmas when our family has to celebrate without her,’ Carlee wrote about Victoria (pictured)

Only those five states have laws enabling family members, guardians or police to ask judges to temporarily strip gun rights from people who show warning signs of violence. Supporters of these measures, also called gun-violence restraining orders, say they can save lives by stopping some shootings and suicides.

Warnings around Cruz included being expelled from school, fighting with classmates, a fascination with weapons and hurting animals, disturbing images and comments posted to social media, as well as previous mental health treatment.

In Florida, that wasn’t enough for relatives, authorities or his schools to request a judicial order barring him from possessing guns. The state, where Cruz is accused of using an AR-15 assault weapon to kill 17 people at his former high school, doesn’t have a red flag law.

Cruz was able to legally own the semi-automatic rifle, even though his mother, classmates and teachers had at times described him as dangerous and threatening, and despite repeated police visits to his home.

‘It is agonizing that our nation is now reeling after yet another a mass shooting where the shooter exhibited warning signs,’ Carlee added in her piece. ‘It was reported that people who knew him referred to him as troubled and as someone who had threatened students. These are red flags for violence.’ 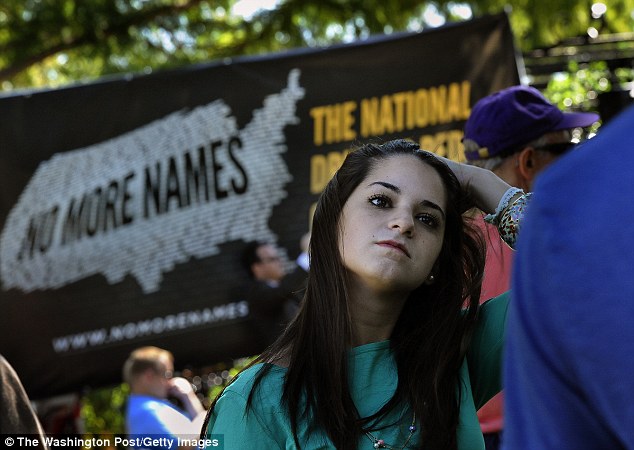 Legislation: Carlee (pictured in an archive photo) cited the Red Flag Laws passed by Connecticut as well as California, Indiana, Oregon and Washington Message: ‘Now is the time for our elected leaders to take action. They need to act or we will throw them out of office,’ Carlee (pictured in an archive photo) wrote

She urged politicians to ‘take action’ and pass similar legislation ‘now’. Eighteen states, along with the District of Columbia, have introduced similar laws, according to Everytown.

‘Now is the time for our elected leaders to take action. They need to act or we will throw them out of office,’ Carlee wrote.

‘Thoughts and prayers are not enough. They have never been enough. The time to act to end this gun violence crisis is today, right now.’

Red flag legislation has been introduced by Democratic state lawmakers, but it hasn’t been heard during this year’s session, and its fate is uncertain in a state Legislature controlled by Republicans who generally favor expanding gun rights.

Thoughts and prayers are not enough. They have never been enough

After Wednesday’s shooting, Republican Governor Rick Scott said he will work to make sure people with mental illnesses don’t have access to guns, but offered no specifics. Florida’s GOP Senator Marco Rubio—facing withering criticism over his acceptance of $3.3 million in career campaign cash donated through the National Rifle Association—is going a step further now.

Rubio said on a Sunday morning show that state legislators should ‘absolutely’ consider enacting a law enabling family members or law enforcement officials to ask a court to remove guns from a person who poses a danger. The senator, who once served as Florida’s House speaker, told Miami CBS affiliate WFOR that it’s an ‘example of a state law’ that could have helped prevent the Florida shooting.

In 2014, California became the first state to let family members ask a judge to remove firearms from a relative who appears to pose a threat. Its legislature took action after a mentally ill man, Elliot Rodger, killed six students and wounded 13 others near the University of California, Santa Barbara, before killing himself.

The Florida shooting has revived debate about whether teachers and school administrators should have that authority as well, given that people at Cruz’s high school witnessed much of his erratic behavior. Carlee (pictured with her mother Donna at a vigil after the Newtown massacre in December 2012), called for officials to take action to help prevent mass shootings

California lawmakers voted to expand their law in 2016 so that high school and college personnel, co-workers and mental health professionals can seek the restraining orders, but Governor Jerry Brown called the effort premature and vetoed it.

‘We need to make sure that when people see signs, they have every ability to do something about getting guns out of the hands of mentally ill and dangerous people,’ Ting told The Associated Press.

Circumstances similar to those in Florida played out seven years ago in the shooting of Representative Gabrielle Giffords in Arizona. Jared Loughner had become increasingly disruptive and erratic at his community college in the months leading up to the shooting, frightening students and causing teachers to request campus police officers be on hand during his classes. Eventually, the school threatened him with suspension.

Soon after, he went to a gun store and legally bought the weapon he used to attack Giffords as she met with constituents, shooting her in the head and killing six people.

Without red flag laws, the main recourse available to family members is to have a troubled loved one committed to a psychiatric institution. Federal law permanently bans anyone who has been involuntary committed from owning guns, but such actions are more difficult to carry out than red flag laws, which are intended to be quick and temporary and have a lower standard of proof. 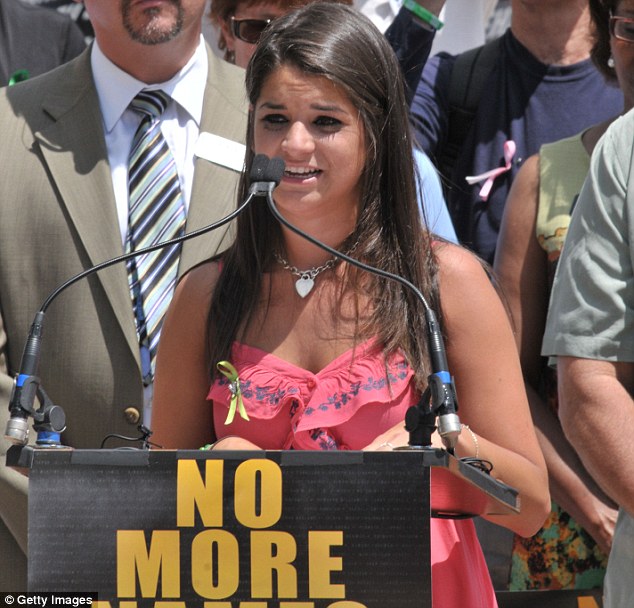 Statement: ‘Thoughts and prayers are not enough. They have never been enough. The time to act to end this gun violence crisis is today, right now,’ Carlee wrote In memory: Carlos and Donna Soto, Victoria’s parents, received the Presidential Citizens Medal posthumously in her honor in February 2013

Without such a commitment, formal adjudication of serious mental illness or a felony conviction, many people can pass background checks and possess guns they already own.

The red flag laws act as a sort of timeout, so someone in psychological distress can get counseling while their fitness to possess a gun is evaluated, said Laura Cutilletta, legal director of the Giffords Law Center.

‘It’s a way to allow for temporary removal of firearms in a situation just like this: where somebody has made threats, where they have been expelled from school because of those threats, they’re in counseling, and parents or the school or whoever it is understands that this person poses a threat,’ she said.

Many gun-rights activists oppose the laws. They say they can be used to unfairly take away rights from people who have not been convicted of crimes, nor professionally evaluated for mental illness.

The NRA’s lobbying arm has said such laws enable courts to remove Second Amendment rights ‘based on third-party allegations and evidentiary standards’ that are lower than what’s required in criminal proceedings.

Connecticut led the way with a 1999 law, passed after an employee shot and killed four executives at state Lottery headquarters. It allows police to remove guns based on probable cause that a person poses a ‘risk of imminent personal injury.’

In a study published last year, researchers at Duke, Yale, Connecticut and Virginia estimated that dozens of suicides have been prevented by the law, roughly one for every 10 gun seizures carried out. They said such laws ‘could significantly mitigate the risk’ posed by the small number of legal gun owners who might suddenly pose a significant danger.