China has created six cloned pups from the DNA of two decorated police dogs in the aim of speeding up their canine training process and passing on strong traits.

The pooches were born in Beijing in August and are already showing skills that wouldn’t be expected for animals as young as them, according to police from the Chinese capital.

Ma Jinlei, an officer from the Criminal Investigation Department of Beijing Public Security Bureau, revealed that a major focus of the program is to pass on these useful traits – such as biting – and help shorten the force’s training period.

The puppies were born in August, with four being from the same litter. Their DNA is more than 99 per cent identical to the two donor dogs, five-year-old Skiding and four-year-old Arie 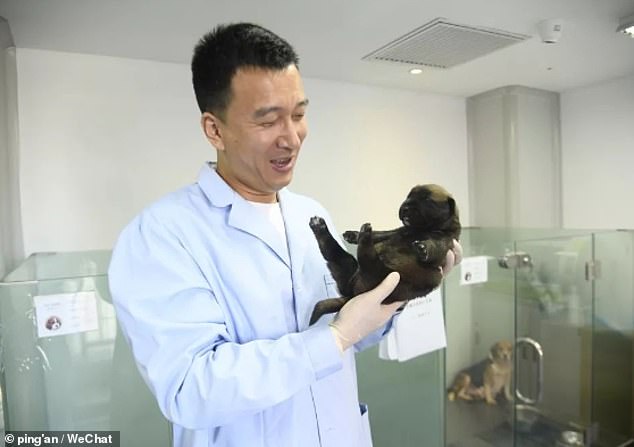 The Beijing Municipal Bureau of Public Security’s Police Dog Base and private company Sinogene worked together to create the pups. Pictured is a scientist with one of the dogs

The Beijing Municipal Bureau of Public Security’s Police Dog Base and Sinogene, a private pet-cloning company, joined forces to create the pups.

The latter bred China’s first cloned police dog, Kunxun, for police in the city of Kunming earlier this year.

The lab has claimed to have found the key to mass-breeding extra strong and fast ‘super dogs’ thanks to a pioneering technology.

The donor dogs – five-year-old Skiding and four-year-old Arie – were chosen because of their proven success with Beijing police, according to a statement from Beijing police posted to their official social media account. 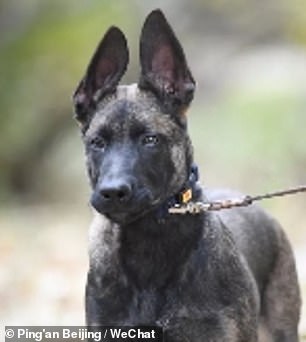 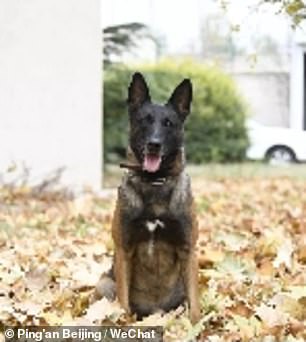 Pictured above are Kechuang (left) and Kexin (right), the ‘mini-mes’ of ‘fearless attacker’ Arie

Four out of the six dogs were from the same litter which was born on August 1 and cloned after Skiding, which was bred by Beijing Police Dog Base and is known for its ‘outstanding sniffing skills’ and ‘exceptional intelligence’.

The other two dogs were born on August 4 in a litter. They are the ‘mini-mes’ of Arie, which was purchased by the police force as an adult dog and has proven to be a ‘fearless attacker’.

The six puppies have been named Kezhong, Kecheng, Kezhi, Kehui, Kechuang and Kexin. Together, their names mean ‘loyalty’, ‘wisdom’ and ‘innovation’.

Their DNA is more than 99 per cent identical to the two donor dogs, according to the police. 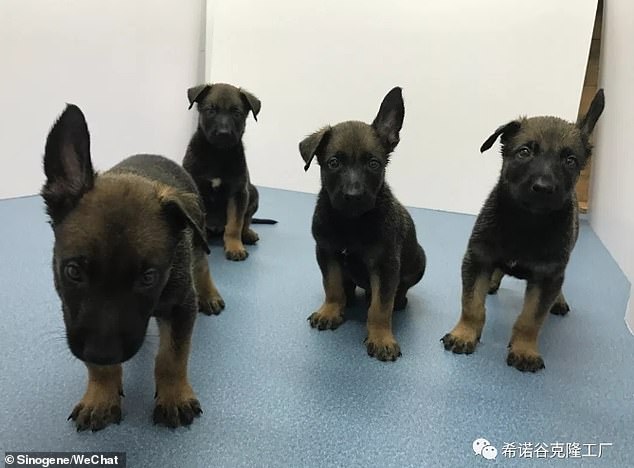 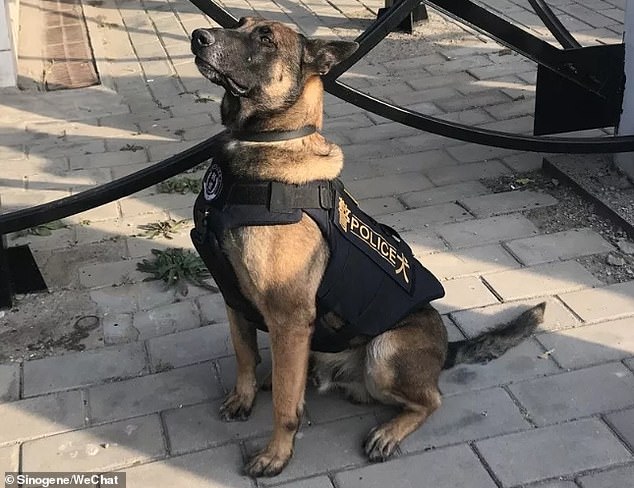 Samples from Skiding and Arie were taken by scientists at Sinogene and the team created a fibroblast cell line and the pups were made.

As well as looking the same, the cloned pups are said to have similar temperaments and abilities.

And although just four months old, the dogs are showing skills that would usually be expected in canines when they reach six months. 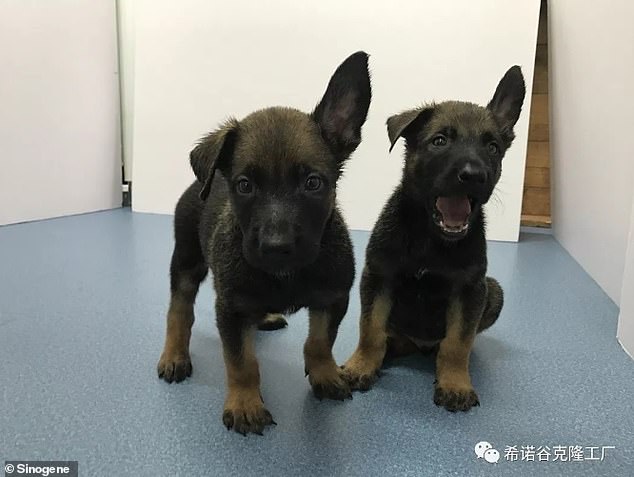 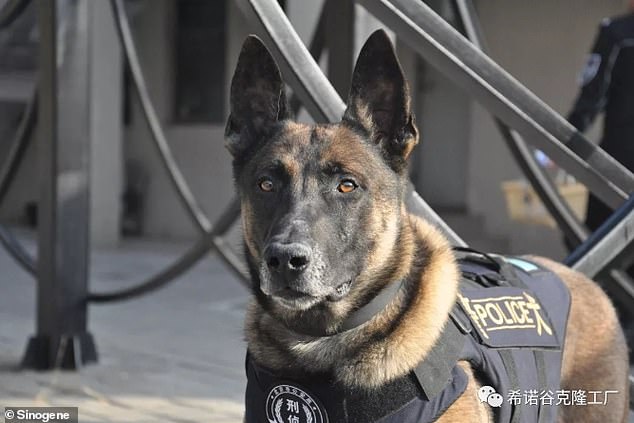 This isn’t the first time that China has cloned a police dog. In March, Kunxun, which was dubbed ‘the Sherlock Holmes of police dogs’ was created from a seven-year-old female wolfdog. She was carried by a beagle surrogate.

Kunxun is a Kunming wolfdog, which is a type of dog bred by the Chinese Police Security Bureau at the police dog centre in Kunming. The breed was created in 1964 and has been trained to assist China’s army and police forces.

Kunxun’s name is a combination of the words ‘Kunming’ and ‘merit’. 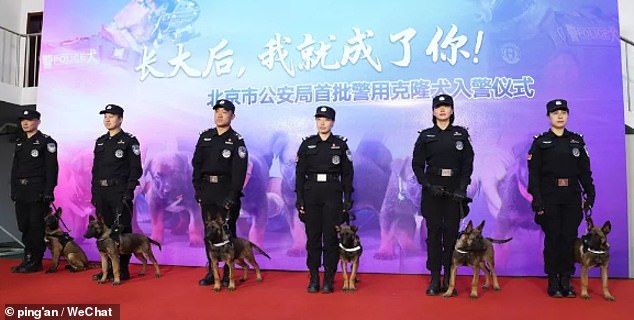 The dogs (pictured with their officers) are already showing great skill in their training, with them achieving things that are usually expected from canines two months older

They were created by a company which has claimed to find the key to mass-breed extra strong ‘super dogs’.

Sinogene Biotechnology is one of the leading companies in China in cloning dogs.

In 2017, the company claimed to have found the key to mass-breeding extra strong and fast ‘super dogs’ thanks to a pioneering technology.

Scientists there said they were able to change a dog’s nature by modifying its genes, and then reproduce it through cloning.

For example, they could customise a dog to make it have bigger muscles and better running ability before making copies of it.

In December, the company cloned a celebrity dog, nine-year-old Juice, which has appeared in various Chinese blockbusters.

Its copy is expected to carry on entertaining film fans in China when the famous pooch dies.