Six countries are considering state boycotts of the World Cup

Six countries will either not send officials to the World Cup or are considering state boycotts of the tournament in response to the nerve agent attack on former Russian spy Sergei Skripal in Salisbury.

Britain announced in mid-March that its royals and ministers would stay away from FIFA’s showpiece event, set to take place between June 14 and July 15.

Iceland last night said it would follow suit while Sweden, Denmark, Australia and Japan are all understood to be considering similar snubs.

Polish President Andrzej Duda’s office said earlier this month that he will be skipping the opening ceremony in Moscow.

Six countries will either not send officials to the World Cup or are considering state boycotts in response to the attack on former Russian spy Sergei Skripal in Salisbury, it has emerged. Pictured: Russian President Vladimir Putin today

It comes as the US said on Monday it would expel 60 Russian diplomats, joining governments across Europe in punishing the Kremlin over the nerve agent attack on Skripal and his daughter on March 4.

Last night, Iceland announced it will stage a diplomatic boycott over the poisoning.

Its foreign ministry said in a statement: ‘Among the measures taken by Iceland is the temporary postponement of all high-level bilateral dialogue with the Russian authorities.

‘Consequently, Icelandic leaders will not attend the FIFA World Cup in Russia this summer,’ it said.

The Reykjavik government also exhorted Moscow to provide ‘clear answers’ over the poisoning of Sergei Skripal and his daughter in Salisbury on March 4.

‘The Salisbury attack constitutes a grave violation of international law and threatens security and peace in Europe,’ the statement said. 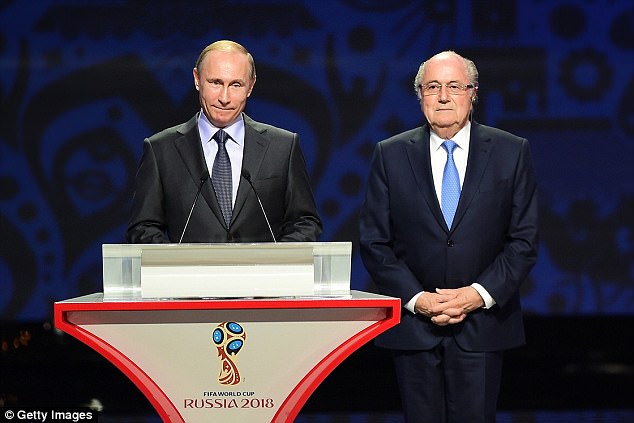 Britain announced in mid-March that its royals and ministers would stay away from FIFA’s showpiece tournament, set to take place between June 14 and July 15. Putin is pictured with former FIFA president Sepp Blatter in 2015

Australia’s Foreign Minister Julie Bishop said today that ‘the boycott of the World Cup is one of the further actions that could be taken in relation to this matter’.

The governing body for Australian football said that as far as it was concerned, the World Cup was going ahead as planned.

‘As things stand, all qualifying teams, including the England team, will be taking part in this FIFA event and that continues to be our intention,’ Football Federation Australia said in an emailed statement.

Earlier this month, Swedish foreign ministry spokesman Per Enerud told AFP ‘this is one of many ideas we are looking at’.

The Danish foreign ministry also told AFP that the punitive step was under discussion but that no final decision had been reached.

It comes as 16 European Union countries on Monday gave a large number of Russian envoys notice to leave their territory.

Russia has denied it was behind the attempted assassination, which left Skripal and his daughter gravely ill in perhaps the first nerve agent attack in Europe since World War II.

It warned that there would be a tit-for-tat response to those countries ‘pandering to British authorities’ without, Moscow claims, fully understanding what had happened.

But Western officials made it clear in announcing the expulsions that they share Britain’s assessment that only the Kremlin could have been behind the March 4 incident in Salisbury, England.

White House spokeswoman Sarah Sanders said Washington and its allies were acting ‘in response to Russia’s use of a military-grade chemical weapon on the soil of the United Kingdom.’

The strong language contrasted with Trump’s warm words of last week, when he overrode his advisors’ concerns and congratulated Putin on his election win.

Russia accuses US of ’emotional deafness’ after shopping mall blaze

Moscow has accused the US of ’emotional deafness’ in announcing a mass expulsion of diplomats as Russia mourns the loss of 64 people in a horrifying shopping mall blaze.

Washington said it would throw out 60 Russian diplomats, joining governments across Europe in punishing the Kremlin over an attack on former spy Sergei Skripal in Salisbury on March 4. 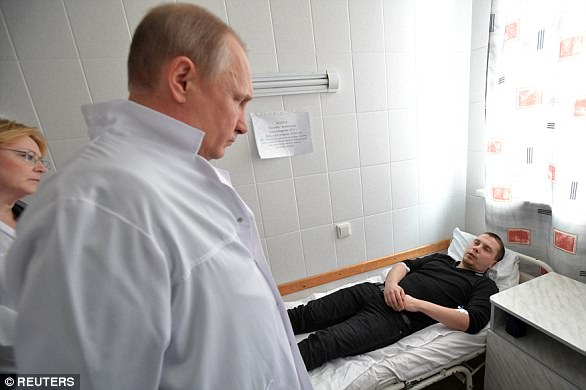 Moscow has accused the US of ’emotional deafness’ in announcing a mass expulsion of diplomats as Russia mourns the loss of 64 people in a horrifying shopping mall blaze. Vladimir Putin is pictured meeting victims of the inferno today

But the Russian ambassador to the US Anatoly Antonov has accused America of ‘callousness’ because it was timed as Russia mourned the loss of dozens of children and adults in the appalling Kemerovo shopping centre inferno.

‘We saw emotional deafness, indifference and callousness from official Washington,’ he said.

‘They just decided to make it more painful for us. Well, you can be happy now.

‘And this is happening in parallel with ordinary Americans sharing our grief and sending condolences.’