Six killed in Costa Rica: Victims were ‘tortured’ before the US born ranch owner’s body was burned

Six people, including an American, were tortured and killed – some shot, some burned, and all doused with gasoline – on a remote ranch in Costa Rica.

Steve Paul Sandusky, 61, of Key West, Florida, was found on his cattle and coffee farm along with five Costa Rican victims who arrived there on Sunday in Llano Bonito de Buenos Aires de Puntarenas, in the southern part of the country.

Sandusky had been living in the country since 2000, according to Q Costa Rica.

The outlet reported that several employees from his restaurant in Dominical de Osa, which closed between 2004 and 2005, had sued him for severance pay and bonuses. In proceedings, Sandusky allegedly said that he had fired the workers because they had stolen from him.

Afterward, according to Sandusky’s lawyer Jorge Enrique Infante, the American moved to quiet Llano Bonito and began farming because he ‘wanted to live in peace.’

Currently, the Organismo de Investigacion have no leads in the slaughter – they were called out to the ranch in Llano Bonito after victims’ family members found their relatives’ bodies on the property

‘He was a very noble, kind, and generous person. He told me that he wanted to learn agriculture and that is why he bought the farm,’ Infante told Q Costa Rica.

‘He started with cattle and then he realized that he had a small profit. Years ago we stopped having a professional relationship but about a year ago I ran into him in a supermarket and we were talking. Yes, he told me that they robbed him a lot.’

A security guard on Sandusky’s Llano Bonito property, Édgar Humberto Rojas Blanco, was shot dead by a former police officer with the surname Saldaña in August of 2006, the local outlet reported.

Sandusky reportedly appeared as a witness in the trial against the officer – Rojas had reportedly called Sandusky before he was shot and told him that the officer had threatened to shoot him, and that he was hiding in a shrub beside a river.

The security guard, Q Costa Rica said, had accused Saldaña of stealing zinc sheets and purling – the police officer was sentenced on November 26, 2006 to 12 years in prison for the murder.

The other five victims – 44-year-old Daniel Quesada Cascante, his 41-year-old wife Villarevia Rivera, their 20-year-old son Daniel Quesada, a woman named Zúñiga Rodriguez, 40, and a man named Borbón Muñoz, 38 – went to the property on Sunday to repair agricultural machinery, according to TVSur.

Daniel Quesada Cascante, 44 (pictured left), his 20-year-old son (pictured second from right) and his 41-year-old wife Villarevia Rivera (pictured right) were among the six tortured and killed on the remote ranch in the Puntarenas province of Costa Rica 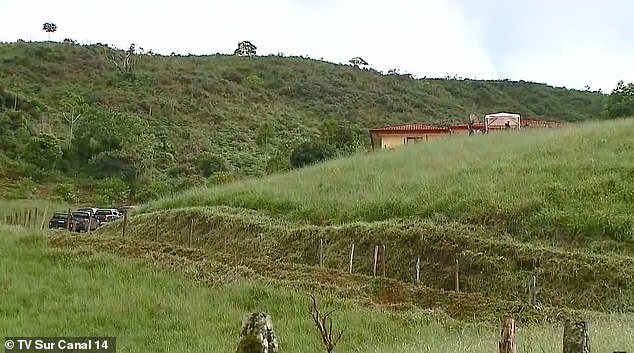 The slaying shook the peaceful nation, which has the lowest homicide rate in Central America at 11.1 per every 100,000 inhabitants.

A broken window and signs of a search inside the home on the property have lead authorities to believe the mass murder could have been a robbery gone wrong.

Sandusky and another of the victims were found burned – one of them was found in the cargo bed of a ‘fully-burned’ pick up truck on the property.

The two women, Rodriguez and Rivera – both shot in the head – were found in front of the vehicle. In an alley about 300 feet away was a man’s body riddled with gunshot wounds – although their corpses weren’t burned like the other two victims, the three were covered in fuel. 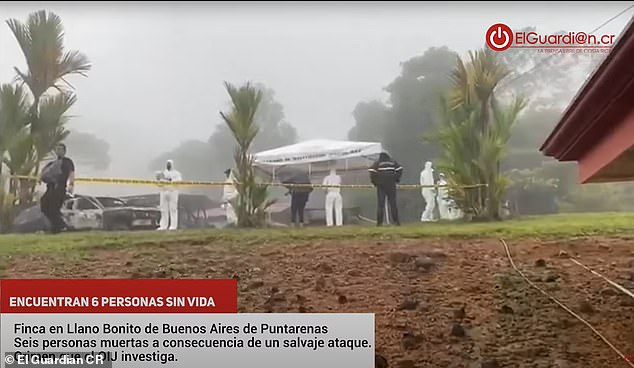 The remote property can only be accessed by a private road, about two miles from the closest public street, police said 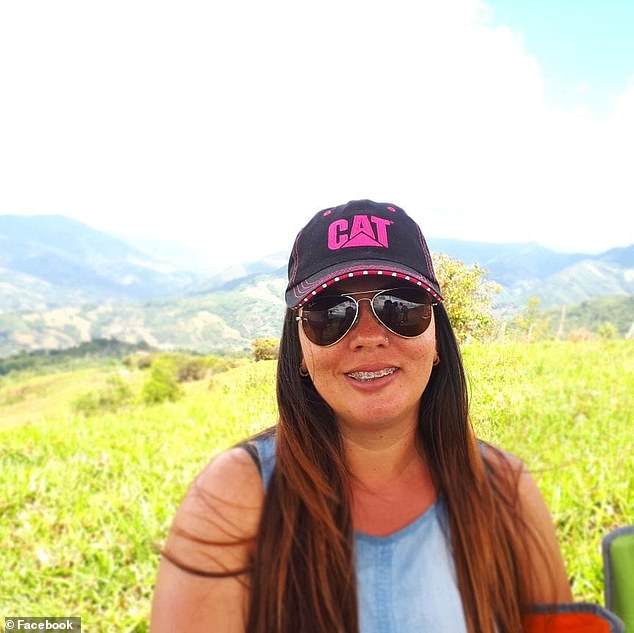 The two women, Rodriguez and Rivera (pictured) – both shot in the head – were found in front of the vehicle. In an alley about 300 feet away was a man’s body riddled with gunshot wounds – although their corpses weren’t burned like the other two victims, the three were covered in fuel

Relatives of the victims traveled to the property after their family members hadn’t returned home, stumbling upon the carnage at the farm.

‘We walked in and found my son’s body fully burned, the scene with the women around the car, it was hard to find all the bodies burned and wrapped in tires and some with shots,’ Eladio Quesada, the slain 44-year-old’s father, told local news outlet AHCR Noticias.

Police were called to the scene at 1 am.

The remote property can only be accessed using a four-wheel-drive vehicle on a gravel road, about two miles from the closest public street, and through several streams police said – the OIJ amassed a team of forensic analysts and detectives from the nation’s capital, San Jose, six hours away.

The United States Embassy was unable to give further details about Sandusky, they said, due to privacy laws.  DailyMail.com could not reach the OIJ for comment at press time.