Six members of Donald Trump’s campaign team setting up for his Tulsa rally have tested positive for COVID-19, as the president plows ahead with the event despite fears it will spark a fresh outbreak of the virus.

Trump’s campaign confirmed Saturday that six campaign advance team members had tested positive for the deadly virus ahead of the controversial rally in Oklahoma.

The individuals were immediately quarantined and any team members who came into contact with them will also be absent from the event, officials said.

‘No COVID-positive staffers or anyone in immediate contact will be at today’s rally or near attendees and elected officials.’

Six members of Donald Trump’s campaign team setting up for his Tulsa rally have tested positive for COVID-19, as the president plows ahead with event despite concerns it will spark a fresh outbreak

Murtaugh said all campaign staff members are tested for COVID-19 as part of safety protocols.

Trump is scheduled to rally with thousands of supporters in Tulsa in an effort to reinvigorate his re-election campaign Saturday night.

This marks his first campaign rally since the coronavirus lockdowns and comes a week after the RNC resumed in-person campaign activities in some states, knocking on more than 260,000 doors.

Concerns have been building over the safety of Trump’s Tulsa rally, ever since the president insisted it would go ahead as planned despite coronavirus cases still rising across America.

Oklahoma is one of the states that has seen a surge in confirmed COVID-19 cases and the city of Tulsa itself has also recorded a sudden spike in cases in the past week. 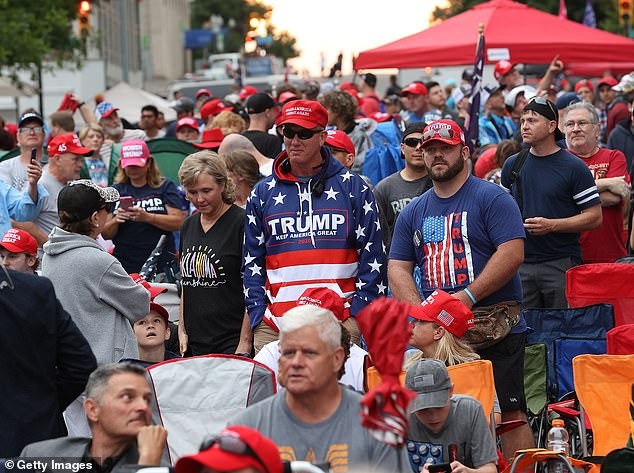 Trump supporters gather to attend his campaign rally Saturday. The staff members were immediately quarantined and any team members who came into contact with them will also be absent from the event, officials said 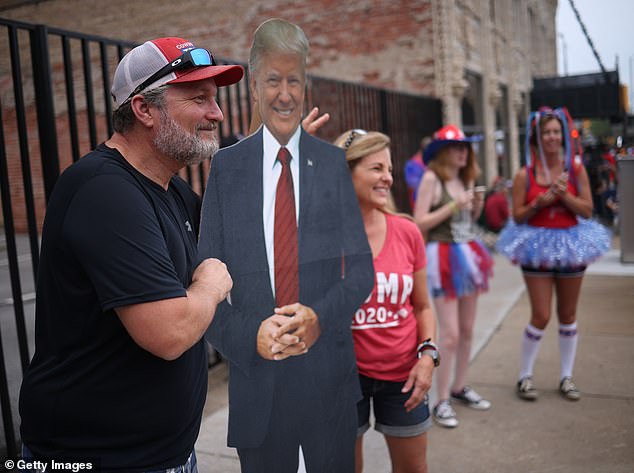 A Trump supporter poses next to a cardboard cutout of the president ahead of Saturday’s rally. Concerns have been building over the safety of Trump’s Tulsa rally, after the Oklahoma Supreme Court ruled in favor of the Republicans and dismissed a legal challenge brought by locals trying to stop it going ahead, amid fears it could worsen the spread of the virus

Health department officials in the city have already warned that two large indoor gatherings recently triggered a spike in new cases in the area.

A legal challenge was brought by locals trying to stop it going ahead and the local health department director urged for the rally to be postponed, amid fears it could worsen the spread of the virus in the city.

But Republican Governor Kevin Stitt brushed off concerns saying it would be safe and the Oklahoma Supreme Court ruled in favor of the Republicans to dismiss the legal challenge in a court ruling Friday.

Tulsa mayor G.T. Bynum also rescinded his curfew order so supporters could camp out Friday night ahead of the big event.

Campaign officials insisted safety precautions have been put in place to limit the risk of an outbreak.

All attendees will be given temperature checks before they pass through security, hand sanitizer will be available and masks will be handed out to wear.

However, under Friday’s court ruling, masks and social distancing are not required of attendees – but are only if they wish to do so – as Oklahoma’s June 1 reopening plan allowed business owners to use discretion on those matters. 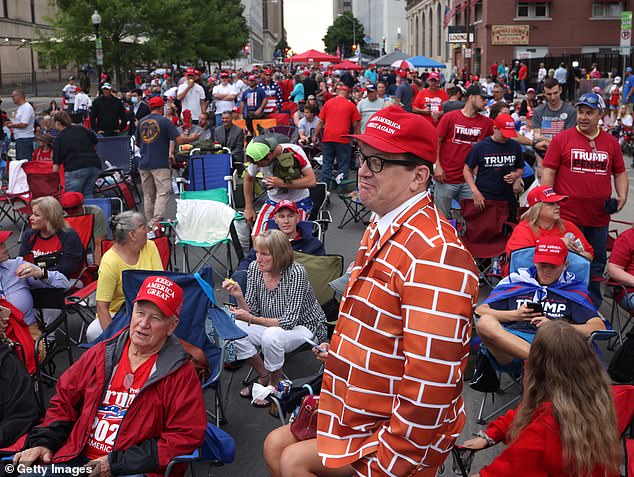 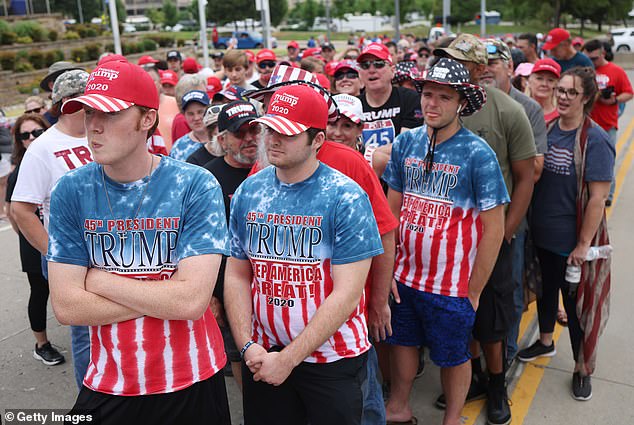 The city of Tulsa, Oklahoma is bracing for a raucous rally after President Donald Trump promised a ‘wild evening’

Very few among the thousands of people gathered outside the stadium during the day Saturday were seen wearing face masks.

When asked whether people attending the rally should wear masks, as is recommended by the CDC, Trump said Friday his supporters can ‘do what they want’.

‘I recommend people do what they want,’ Trump, who has repeatedly refused to wear a mask, told Axios.

He also insisted he would not be wearing a mask at the event.

‘You know, there was a time when people thought it was worse wearing a mask. I let people make up their own decision.’

The president has promised a ‘wild evening’ for his supporters at what will be his first rally in three months.

His campaign said it expects the 19,000-plus seat BOK Center to be filled, making it the biggest indoor event the country has seen since the pandemic shuttered events back in March. 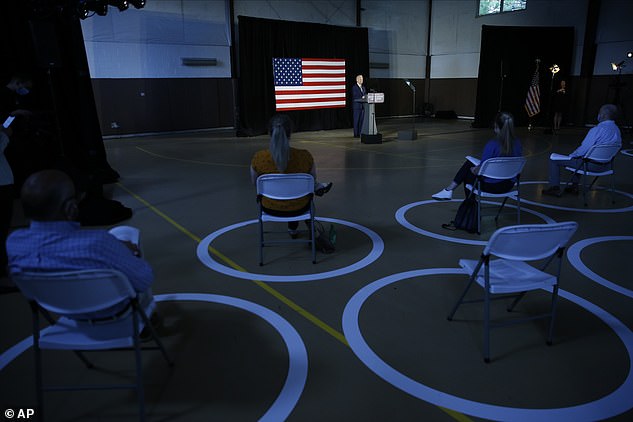 Joe Biden has held a limited amount of in-person events in the past few weeks because of the coronavirus. Events he has attended have enforced social distancing such as the one pictured above in Pennsylvania on Wednesday where attendees were separated

While Trump has dismissed safety concerns to push on with his campaign trail, Democrat rival Joe Biden has taken a different approach to his campaign, committing to social distancing measures and coronavirus precautions as cases continue to mount across the country.

He has held only a small number of in-person campaign events in the past few weeks as his campaign says he is trying to follow the advice from public health experts.

On Friday, Trump took a swipe at his opponent’s social distanced event in Pennsylvania Wednesday posting a picture of a nearly empty hall on Twitter and stating that the former Vice President’s ‘rally’ had ‘zero enthusiasm’.

Biden responded criticizing the president for his response to the coronavirus and calling on him to spend less time on Twitter.