Six men were today found guilty of a string of sex offences relating to the sexual exploitation of teenage girls in Rotherham more than a decade ago.

Today’s convictions at Sheffield Crown Court are the latest to arise from a huge probe into what happened in the South Yorkshire town between 1997 and 2013. 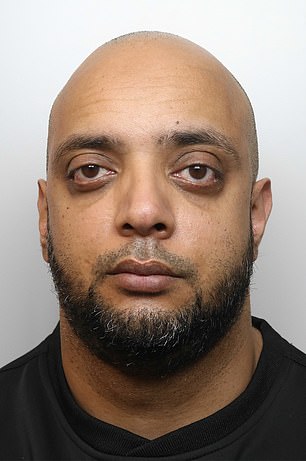 More than 200 National Crime Agency staff are working on Operation Stovewood and it believes 1,510 teenagers were exploited in Rotherham during the period.

The latest convictions relate to the abuse of seven girls who were all under the age of 16 between 1998 and 2002 in Rotherham and the surrounding areas.

The six men will be sentenced on Friday by a judge who heard how teenage girls were preyed on by men, often picking them up outside their schools.

The jury heard how the girls were targeted due to their vulnerability and were given alcohol and drugs before some were raped by multiple men.

Violence was sometimes used to ensure they complied, the court heard. The jury found the six defendants guilty of 20 different counts.

Today’s verdicts mean that 20 men have now been convicted since the NCA took over the investigation of child sexual exploitation cases in Rotherham.

A further 12 suspects have been charged and 102 have been arrested or attended a police station voluntarily and bailed or released under investigation.

There are currently 23 ongoing investigations under the Stovewood umbrella, 313 victims have engaged with it and more than 190 suspects have been identified. 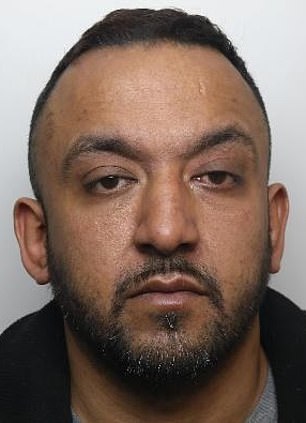 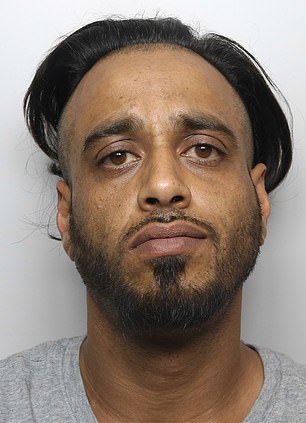 Operation Stovewood Senior Investigating Officer Philip Marshall said: ‘Today, six more men join the other 14 who have already been convicted of sexually abusing young girls in Rotherham, going back as far as 1997.

‘They exploited vulnerable girls for their own sexual gratification and I am glad that today, they have been held accountable for their devastating actions.

What is Operation Stovewood?

The NCA launched Operation Stovewood, at the invitation of South Yorkshire Police, after Professor Alexis Jay’s 2014 report into the rape, grooming and trafficking of hundreds of children in Rotherham.

The Jay Report described how more than 1,400 children had been affected – a figure which was later established to be an underestimate by Operation Stovewood, which has identified 1,523 victims.

It is estimated the operation will cost more than £90million by 2024 – the date to which current planning extends.

‘The victims in this case have shown immense courage and bravery in re-living what happened to them and I would like to thank them for helping us bring their abusers to justice.

‘I hope these convictions build confidence with the victims and survivors we are currently working with – and those who are yet to come forward – showing that we will listen to you and do all we can to get positive court outcomes.

‘We still have a lot of work to do and are not complacent about the task we face – Stovewood is complex in its nature and scale but this will not diminish the pace of our effort.

‘I would also like to thank partners for their support, particularly the Independent Sexual Violence Advocates (ISVAs). The NCA remains committed to investigate all matters within our remit to bring child sex offenders to justice.’

The NCA was invited into the probe following the Jay Report which shocked the nation in 2014 when it outlined the scale of the offending against children in Rotherham.

The agency now has more than 200 people working on Operation Stovewood, which had a budget last year of just under £12million, and is looking to increase this as it works towards recruiting a staff of 250. 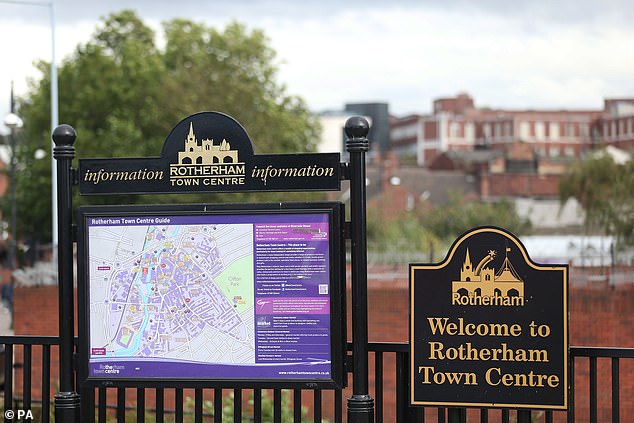 The agency said it has now engaged with 313 alleged victims and survivors in the town and has identified 190 suspects.

The NCA said the sexual exploitation of hundreds of teenagers in Rotherham will continue until as many potential victims as possible have been contacted.

Asked how many years the operation will take, NCA regional head of investigations Rob Burgess said: ‘Putting a time on it is not right, it’s not fair in those circumstances.

‘This is about pursuing the investigation to a point where, effectively, we’ve no longer got any victims that we can deal with. And, in reality that will take as long as it does.

‘I would say that we are very conscious of the cost of an investigation like this and we are very careful about how we proceed.’

Operation Stovewood is the largest child sexual exploitation and abuse inquiry in the UK. Mr Burgess repeated his call for those affected to come forward.

He stressed how the operation is victim-focused and how the NCA is working with a range of other agencies to support survivors in Rotherham.

Kate Hurst, of the Crown Prosecution Service, said: ‘Each of these men knew the girls were either vulnerable and underage, and in some cases both, when they raped or sexually assaulted them. 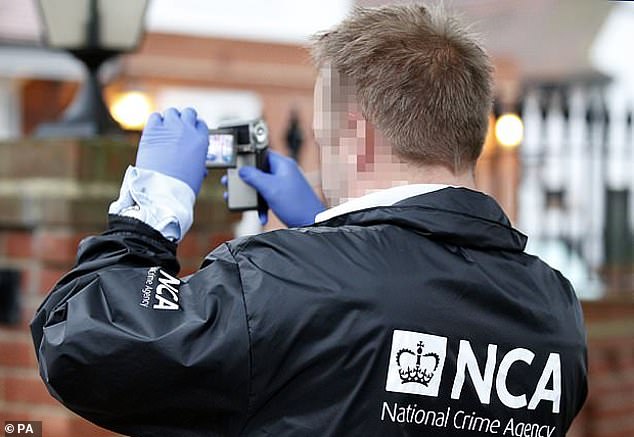 The National Crime Agency, often called ‘Britain’s FBI’, is conducting a huge investigation after a 2014 report found more than 1,000 young girls had been abused in Rotherham

‘They were reckless and did not care if they were children or not. Some of the men used threats of violence and they often had sex with these children while they were drunk or high on drugs.

‘They tried to deny their responsibility claiming that the victims were lying or that they did not know they were underage.

‘Our team worked very closely with the NCA over a significant period of time during the course of this investigation in advising, building and preparing this case effectively for trial.

‘We were able to prove that these predators targeted and then abused girls in Rotherham for their own sexual satisfaction.’

Aftab Hussain was found guilty of two counts of indecent assault against a female under 16.

Saddiq was found guilty of five counts of indecent assault against a female under 16, two counts of rape of a girl under 16 and two counts of child abduction relating to a child under 16.

The 33-year-old, who must remain anonymous for legal reasons, was found guilty of two counts of indecent assault against a female under 16.

However he was found not guilty of indecent assault against female under the age of 16, and rape of a girl under 16.

The 35-year-old man, who also cannot be named, was found guilty of indecent assault against female under 16, and two counts of child abduction relating to a child under 16.

The British towns and cities where Asian sex gangs were exposed

Rotherham – The issue of child abuse in the town first came to light in 2010 when five Asian men were jailed for sexual offences against under-age girls.

Rochdale – The trial of nine men for grooming young white girls for sex attracted widespread public outrage and sparked a national debate when they were convicted in 2012.

The gang received jail sentences of between four and 19 years for offences committed against five girls – aged between 13 and 15 – in and around Rochdale between 2008 and 2010.

The case returned to the public consciousness when the BBC broadcast its Three Girls drama in 2017, based on the experiences of some of the victims.

Newcastle – A total of 17 men and one woman were convicted of, or admitted, charges including rape, supplying drugs and inciting prostitution, in Newcastle in 2017.

Older men preyed on immature teenagers who were plied with cocaine, cannabis, alcohol or mephedrone (M-Cat), then raped or persuaded into having sexual activity at parties known as ‘sessions’.

The case raised huge controversy after a convicted rapist was paid almost £10,000 of taxpayers’ money to spy on parties where under-age girls were intoxicated and sexually abused.

Northumbria Police launched a major investigation after receiving information from social workers and initially spoke to 108 potential victims. Over the course of four trials, 20 young women gave evidence covering a period from 2011 to 2014.

Oxford – A group of men who abused teenage girls in a vehicle they called the ‘s**gwagon’ were jailed for a total of nearly 90 years in June 2018.

The men – aged 36 to 48 – befriended vulnerable girls as young as 13 before plying them drink and drugs at ‘parties’ in Oxford.

The eight men – branded ‘predatory and cynical’ by a judge – were jailed for between seven and a half and fifteen years each.

Bristol – Some 13 Somali men were jailed for more than a total of more than 100 years after they were convicted in 2014 of running an inner city sex ring.

Victims as young as 13 were preyed upon, sexually abused and trafficked across Bristol to be passed around the men’s friends for money.

Aylesbury – Six men were jailed in 2015 for grooming vulnerable under-age white girls between 2006 and 2012.

The Old Bailey heard victims would be plied with alcohol and forced to perform sex acts for as little as ‘the price of a McDonalds’.

Peterborough – A total of 10 men were convicted of child sex crimes in the town, including ‘predatory’ restaurant boss Mohammed Khubaib.

He was jailed for 13 years at the Old Bailey in 2015, after he was found guilty of forcing a 14-year-old girl to perform a sex act on him and nine counts of trafficking for sexual exploitation, involving girls aged from 12 to 15, between 2010 and 2013.

Telford – Telford became the latest town to become the focus of the now sadly familiar stories of abuse.

A Sunday Mirror investigation concluded that around 1,000 children could have been sexually exploited in the Shropshire town over a 40-year period, leading to calls for a public inquiry.

Huddersfield: 20 sex abusers were jailed for grooming vulnerable girls as young as 11.

The court heard evidence from 15 victims during the trials and the judge said he fears none of them will ever recover from their ordeals.

In victim statements the girls described coming into contact with the abusers after being bullied at school and said the relationship became ‘one of those things that you couldn’t get out of’.