Size-22 teacher who hid her 4,000-calorie from her husband drops a eight stone in just a year

A size 22 teacher, who secretly binged on pint-sized tubs of ice cream and family bags of crisps as after work snacks, is now virtually unrecognisable after shedding eight stone.

Big since childhood, Allison Forrest, 33, from Basingstoke, Hampshire, said her diet went from bad to worse when she started working, and would reach for calorie-laden treats as a quick fix after long, demanding days.

Following a relatively healthy breakfast and lunch, she would gorge on ice cream, crisps and sausage and bacon butties in the evening, eventually hitting 17st 13lb and feeling so embarrassed by her overeating that she hid the evidence from her husband Jordan, 38, a mechanical engineer.

Then, in autumn 2017, a chance comment by a nurse about the weight loss and wellness plan WW, during a routine check-up for her asthma, inspired Allison to change her ways.

Allison reached a weight of 17st 13lb after homesickness led her to binging on junk food. She managed to ditch the poor diet, and slimmed down to weigh just 9st 13lb in a year

Allison, who says she feels ‘better than ever,’ explained: ‘A lot of my problems stem from stress-related overeating. That, and getting into the habit of bingeing after work.

‘I’d get home and have a pint of Ben & Jerry’s ice cream or a family-sized bag of crisps with dip. Then, I’d hide all the wrappers from Jordan as I was ashamed to be eating so much.

‘Now though, I am feeling really good. I have much more energy and confidence.’

Allison, who is originally from Michigan, but moved to the UK in 2010 after meeting Jordan online, told how she has battled with her size for most of her life. 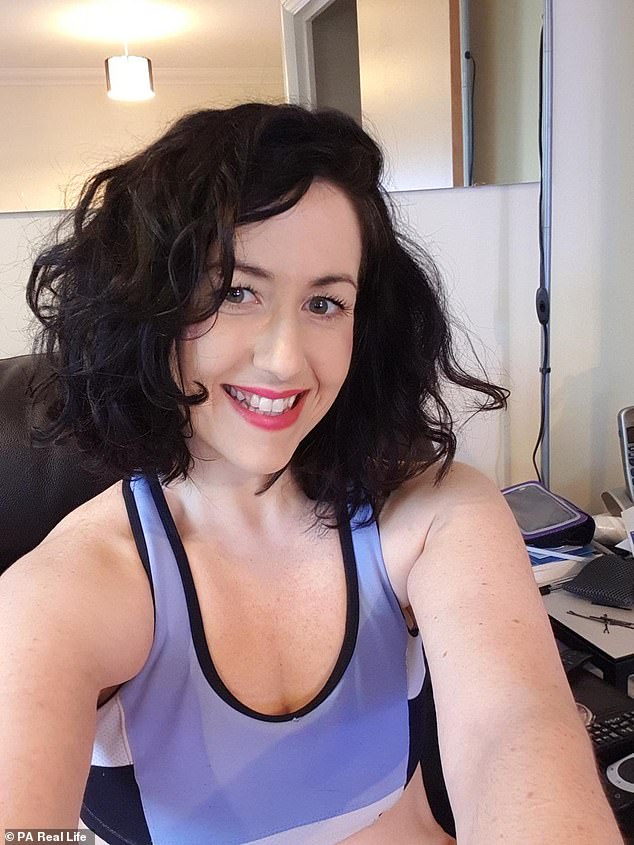 Allison managed to lose 9 stone in just over a year, and swapped her unhealthy junkfood diet for salads and homemade meals

Being overweight at school saw her teased by classmates, who would cruelly call her fat.

Over the years, she tried various diets and healthy eating plans and, while she managed to shift a little weight here and there, she soon gained it back.

Still, determined to make something of herself, she studied hard and landed a university place – although her student years were when her unhealthy eating began to spiral.

She recalled: ‘I’d always be going out to eat with friends. My diet got much worse when I was a student.’

The teacher had tried various diets over the years, but struggled to find one that would stick. At her heaviest she weighed over 17 stone (pictured)

Despite her university being in the US, she spent some of her time studying in London.

She continued: ‘I met Jordan online just before I went over. I wanted to get to know some people, so I’d have a friendly face in a new city – plus I’ve always liked British guys.

‘I was more or less at my heaviest weight when I met him.’

In time, Allison moved over to the UK for good to be with Jordan – but homesickness made her comfort eat even more. 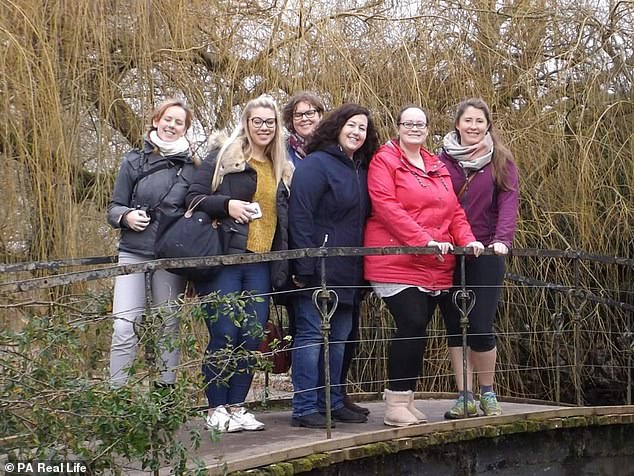 Allison, pictured here before her weight loss, suffered from homesickness having moved from the US to the UK, which made her comfort eat more and more

Then, when she started working, an unhealthy cycle of binge eating really took hold.

While breakfast would be a nutritious bowl of porridge and she would eat the school lunch of the day alongside the children she taught, it was after work that she gorged.

After hiding the evidence of her junk food feasts, she would then enjoy a home-cooked hearty meal with Jordan when he came home. 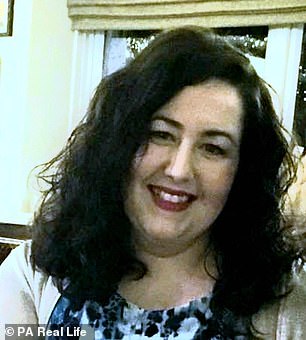 She admits she hated buying clothes, and was finding she had all kinds of back pain as well as asthma symptoms, which got worse the heavier she became

‘It got to the point where my confidence was really quite affected. I would hate buying clothes, as it just reminded me of how nothing fitted, so I’d wear the same few outfits, recycled again and again.

‘I was also getting all sorts of health problems. I’d get awful back and joint ache, which could last for months at a time, as well as struggling with asthma symptoms, which got worse the heavier I was.’

Fortunately everything changed for Allison in autumn 2017 when, at an asthma check-up, WW was suggested for the first time.

Sick of feeling sluggish and self-conscious, she knew it was her chance to overhaul her life so, in January 2018, she joined her local club as a New Year’s Resolution. 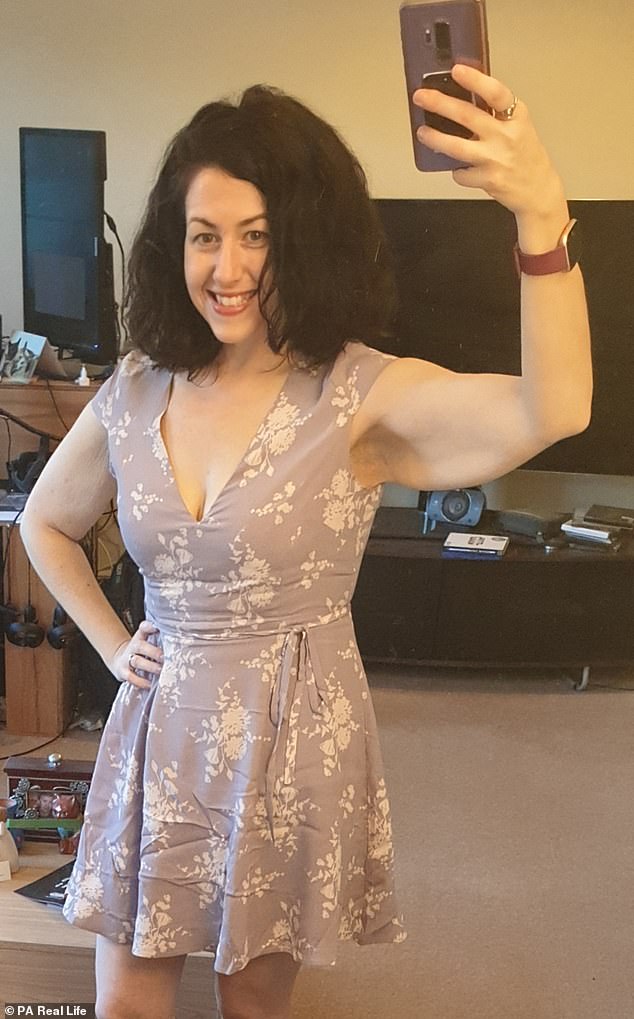 Allison dropped an incredible eight stone in just over a year, and now makes healthy swaps by cooking up her favourite fast food meals at home (pictured after weight loss)

She recalled: ‘I did feel nervous going to that first meeting. I hadn’t weighed myself in a while so I wasn’t sure exactly how heavy I was, but I kept reminding myself that I had to start somewhere.

‘I think WW worked where other plans didn’t because their SmartPoints system makes it so easy to keep track of what you’re eating. I can track all my meals – even if I’m going out to eat – and plan in when to allow myself a little treat.’

Now, she will have a protein shake for breakfast, a salad for lunch and a healthy home-cooked meal for dinner. 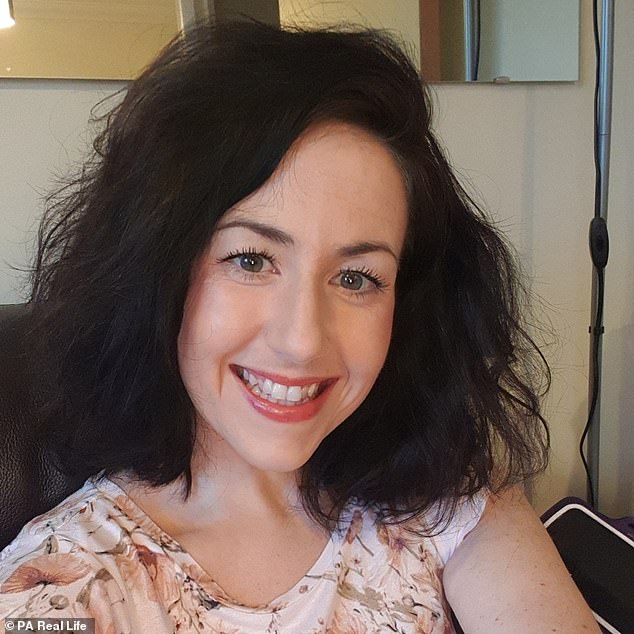 Now the teacher, who has a new found confidence after her weight loss, is planning to run a 5km, as well as practising weight training and yoga

She explained: ‘I’ve always loved cooking, but I now know how important it is to make those healthy swaps.

‘For example, the other day I had a chicken and mushroom pie, but instead of pastry, I made it with cauliflower and lentils.’

With the help of the WW app, Allison also began to exercise more.

Speaking ahead of WW’s 5 km My Way challenge, a nationwide event taking place over the weekend of 8-9 June where the WW community and the wider public are invited to complete 5km, over whatever time they like and in whatever fashion, she added: ‘I don’t go to the gym, I just use the app. 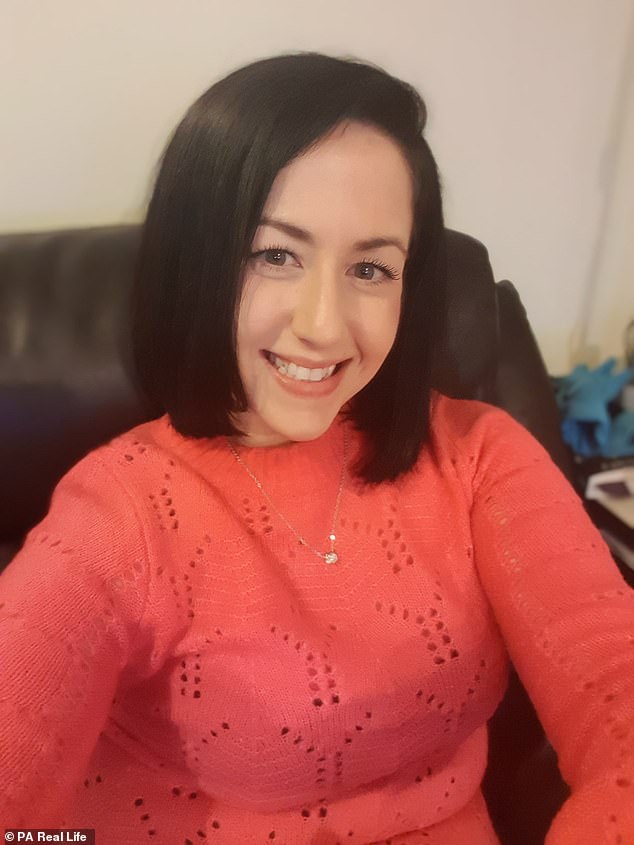 Allison admits that sometimes she still has her off days, but is keen to focus on ‘pushing through’ and getting back on it

‘I started out running, and now I go four to five times a week, as well as weight training and yoga.’

Now at her goal weight, Allison is feeling brilliant and hopes that, by sharing her story, she will inspire others struggling with their body image.

She concluded: ‘To anybody else out there trying to lose weight, I’d say it’s okay if you fall off the wagon – we all have our off days – but it’s about pushing through and getting yourself back on.

‘The best advice I can give is to take it one day at a time.’

Lunch: Meal from the school canteen

If you’re inspired by Allison’s story, start your own wellness journey by downloading the WW app. For more information, visit www.weightwatchers.com/uk/