A size 24 woman who lost 12 stone after a mortifying holiday snap ‘left her in tears’ has overhauled her lifestyle to become a firefighter.

Turning to food for comfort from an early age, Fran Drake, now 31, of Bournemouth, Dorset, struggled with her size for much of her life – prompting cruel classmates to dub her ‘Fat Fran’.

Over the years she tried a handful of diets, but when none of them kept the pounds off for long, she resigned herself to ‘being a bigger lady’, eventually reaching 22 stone.

Then everything changed when she was flicking through photos from the trip of a lifetime to Walt Disney World, Florida, USA, in April 2016, with her husband Matt, 30 – and was reduced to tears at realising just how overweight she had become.

Seeing this photo of herself on holiday in Florida gave Fran Drake, from Bournemouth, the shock she needed to overhaul her diet and lifestyle

From there Fran ditched her diet of Pop Tarts and cheese-laden pasta bakes, and before long the pounds began to melt away.

Now she has shed a mammoth 12 stone, slimming to a 10 stone size eight – and has even fulfilled her ambition of becoming a trainee firefighter.

She said: ‘I convinced myself before jetting off to Florida that I’d lost enough weight to finally look good on holiday, when in reality I’d lost a few pounds and was still grossly overweight.

‘Now I’m healthier than ever, I’m finally training with the fire brigade and doing something meaningful with my life for the first time in what feels like forever.’ 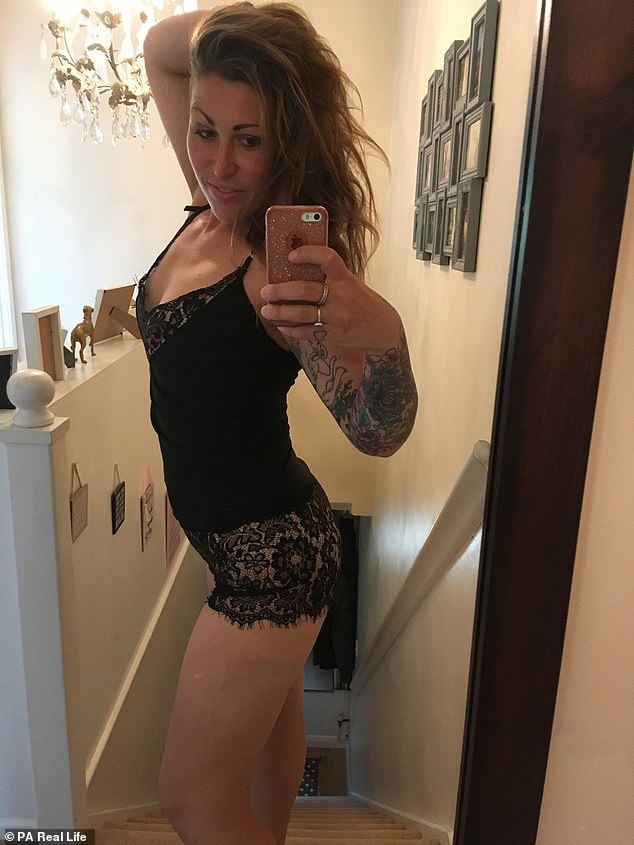 Now Fran has shed a mammoth 12 stone, slimming to a 10 stone size eight – and has even fulfilled her ambition of becoming a trainee firefighter 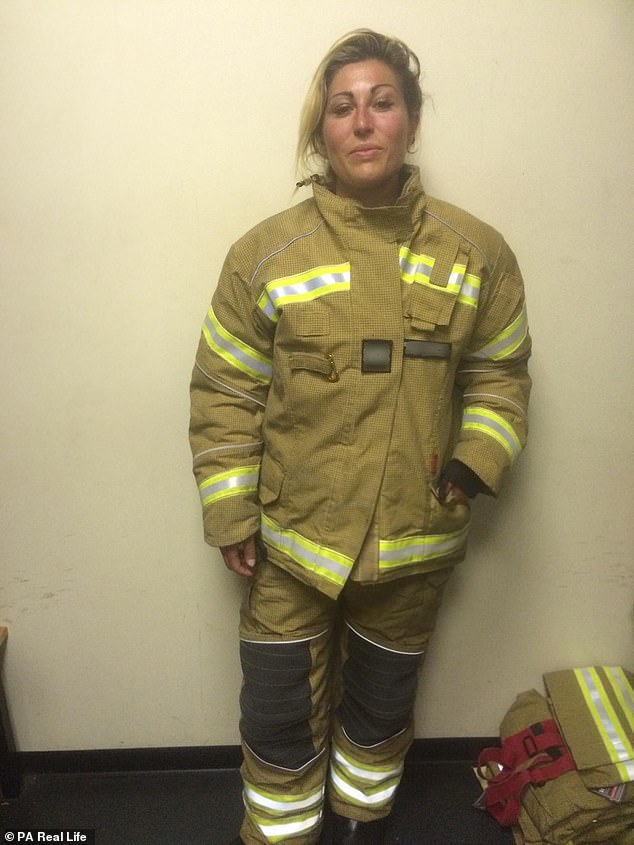 Fran had never thought she’d fulfil her childhood dream of becoming a firefighter due to her weight. Pictured in her uniform

Since childhood Fran, who married carpenter Matt on May 1, 2017 at Kingston Maurward, an 18th century mansion house in Dorchester, Dorset, has battled with her weight.

She was teased mercilessly at school which left her confidence in shreds.

‘Children have a knack for sniffing out your biggest insecurity and making you feel 10 times worse about it,’ she recalled.

‘Unfortunately, my weakness wasn’t too hard to spot – my weight – and from the age of 11, I was referred to as “Fat Fran” or “Fatty-esca”. 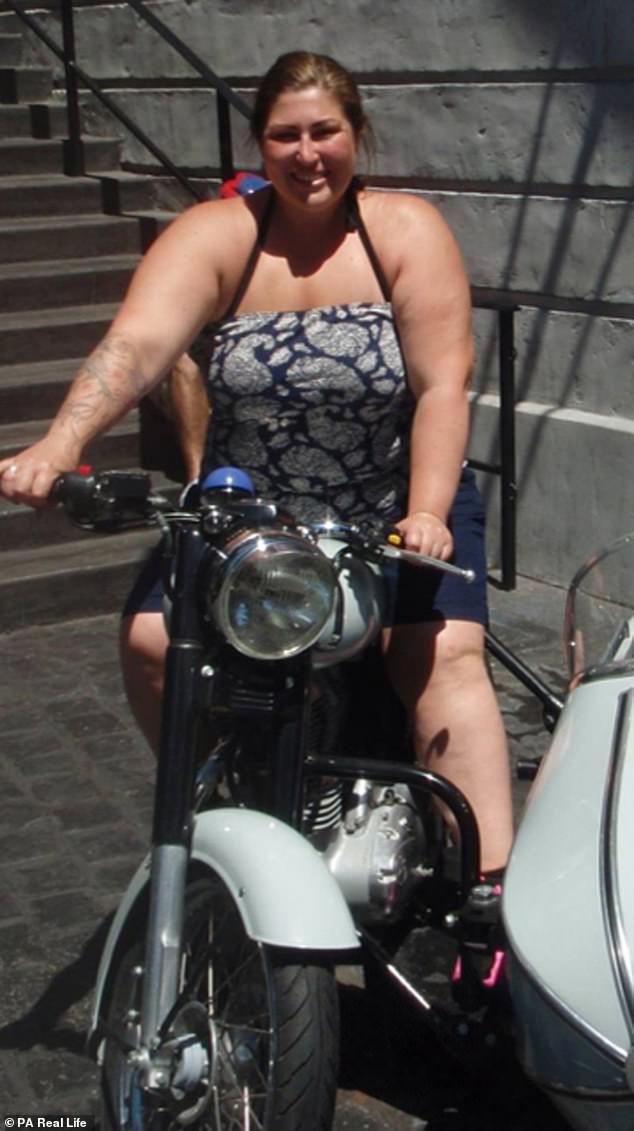 Since childhood Fran has battled with her weight, with cruel bullies at school dubbing her ‘Fat Fran’ 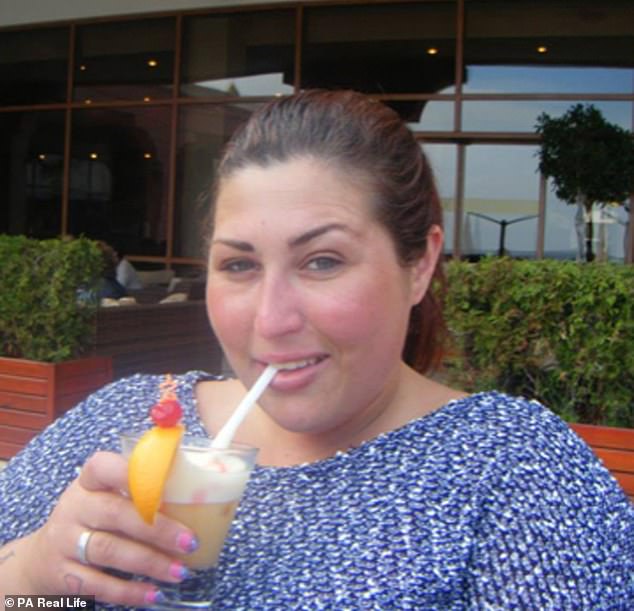 After leaving school and landing a job working in patient services for the NHS, Fran fell into a cycle of yo-yo dieting

‘I grew up in a household where, if something was going wrong, you’d cheer yourself up with something hearty and filling, and that’s how I got locked into a vicious cycle.’

After leaving school and landing a job working in patient services for the NHS, Fran fell into a cycle of yo-yo dieting.

Over the years she tried every regime under the sun, from the 5:2 diet, where you fast for two days of the week, to the cabbage soup diet.

But when nothing worked, she decided instead to alter her mindset and try to accept her body. 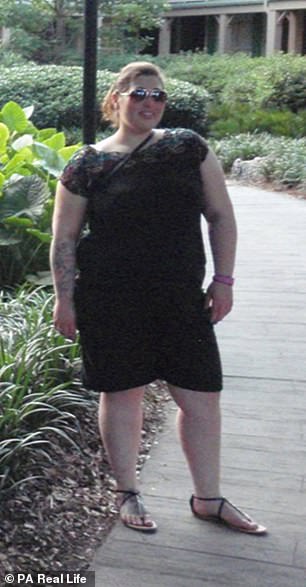 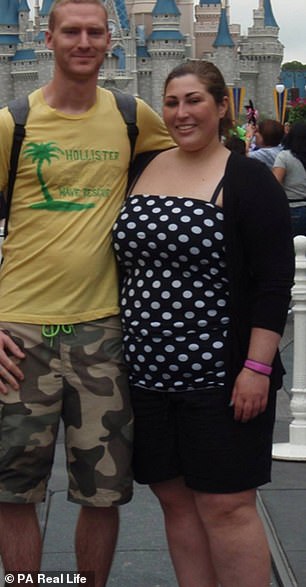 Fran began dating Matt (pictured right) in 2011 at a size 18, and began to eat more after settling into a happy relationship

‘Just because you’re not a size 8 doesn’t mean you can’t be happy in yourself.’

Embracing her fuller figure paid off, as Fran saw her confidence grow. And in 2011 – then a size 18 – she started dating Matt after they got talking at a Christmas party.

‘Bagging myself a fit man really reinforced the idea that I could be happy in my own skin without losing any weight,’ she said.

‘I was never confident when it came to dating before I met Matt. I always ended up with men that didn’t appreciate me and I thought I didn’t deserve any better because of my weight. 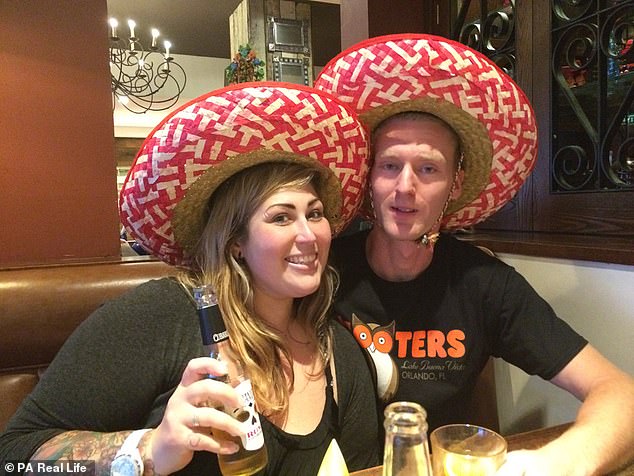 ‘But the problem was that after settling into a happy relationship and feeling more confident in myself, I started to eat more and more.’

Though her relationship with Matt was great, Fran saw her diet go from bad to worse and on a typical day, she would eat 3,500 calories a day – almost double the NHS recommended daily amount for women of 2,000 cals. 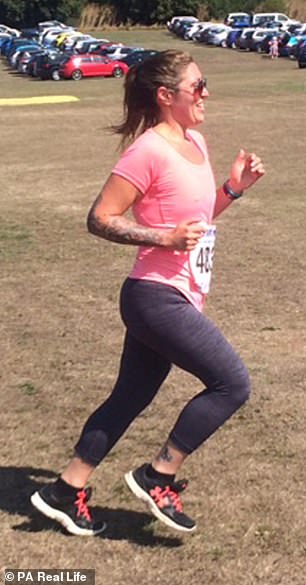 Fran overhauled her diet and took up exercise

Discussing Matt’s naturally athletic build, she said: ‘On nights out people would whisper, “She’s punching” – like I didn’t know that he was in much better shape than me already.’

By 2016, Fran found herself squeezing into a size 24 and tipping the scales at 22 stone.

That April, she and Matt booked to go to Walt Disney World and, though she was still feeling relatively confident, she decided to try her hand at dieting once more ahead of the trip.

‘I was still very much of the mindset that I was happy with how I looked but wanted to be a bit trimmer for Florida,’ she recalled.

‘I gave the 5:2 diet another whirl and was thrilled to lose a few extra pounds. I managed to drop a dress size down to a 22, and I was actually really happy.

‘Florida was amazing too – the trip of a lifetime.’

But Fran’s dream holiday soon became a nightmare when, back in the UK, she decided to leaf through the photos she had taken and was left shocked at how she looked.

‘I don’t know what it was about those particular set of photos, but it suddenly dawned on me that if I didn’t change now, my weight was going to kill me,’ she said.

‘It all finally hit me, and I decided to overhaul my lifestyle there and then.’ 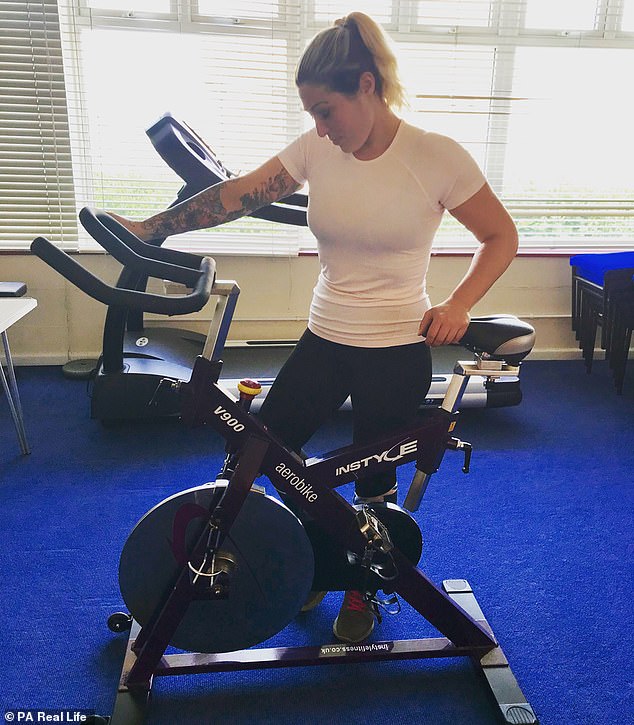 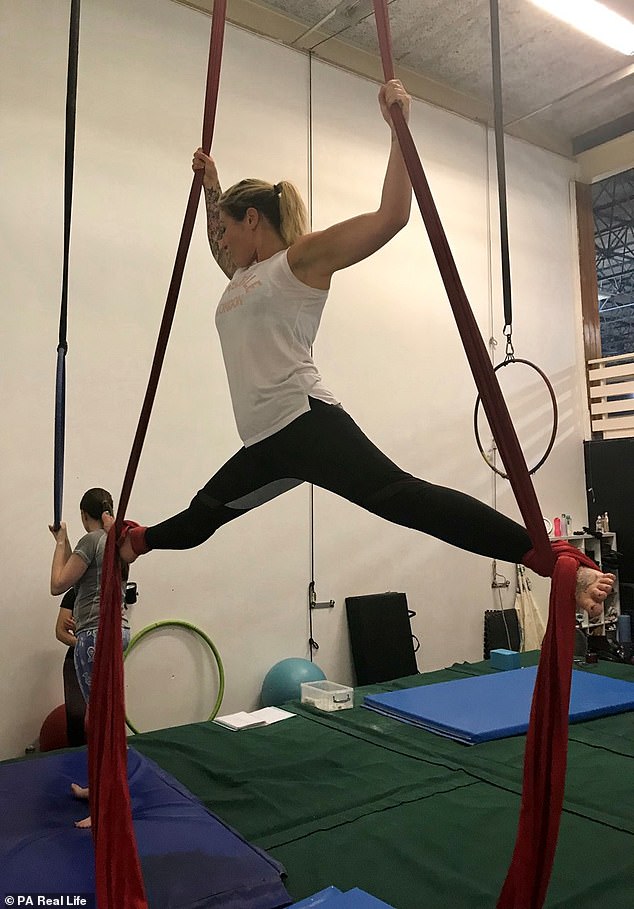 To fuel her workouts, Fran upped her protein intake with supplement brand Bio-synergy

Signing up to her local slimming group in April 2016, Fran swapped the junk food she had been living on for fresh home-cooked meals, veggie casseroles and fruit salads.

Losing over six stone in a year, she was able to fit into a svelte size 12 corset dress by the time her wedding day rolled round in May 2017.

Remembering her special day, she said: ‘Looking back, I can’t imagine what I would have looked like walking down the aisle in a size 22 wedding dress. 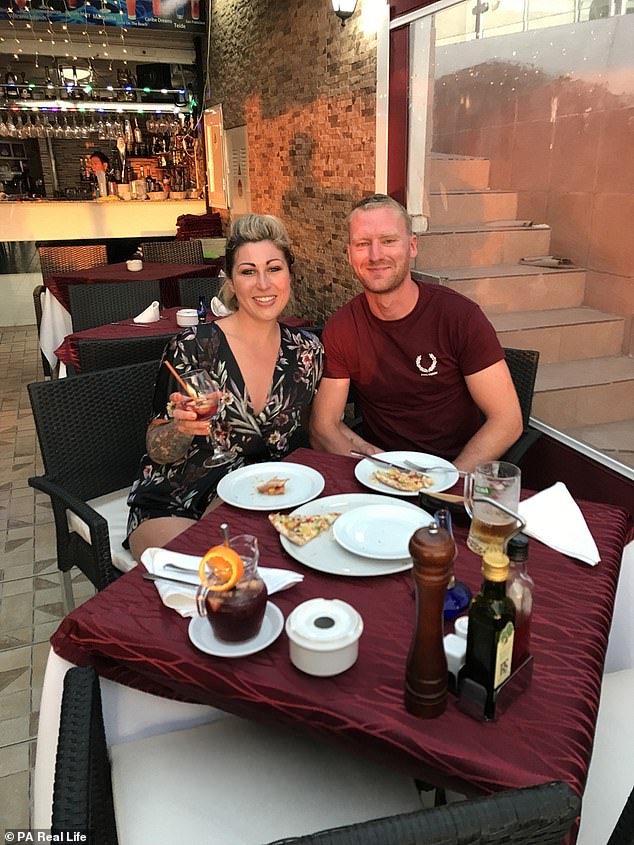 Losing over six stone in a year, Fran was able to fit into a svelte size 12 corset dress by the time her wedding day rolled round in May 2017. Pictured on holiday with husband Matt

‘I can look back through my wedding day photos and smile at the happy memories without any self-loathing.’

To fuel her workouts, she upped her protein intake with supplement brand Bio-synergy.

Able to do things she never thought possible, from training in the gym to going on country walks with Matt, Fran found herself wanting to put her newfound fitness to use.

‘I’d always admired firefighters and growing up I thought it would be ace to work as one, but because of my weight the idea soon fell off my radar,’ she said.

‘But after the weight began to come off, I decided to make that my goal – to become a trained firefighter.’ 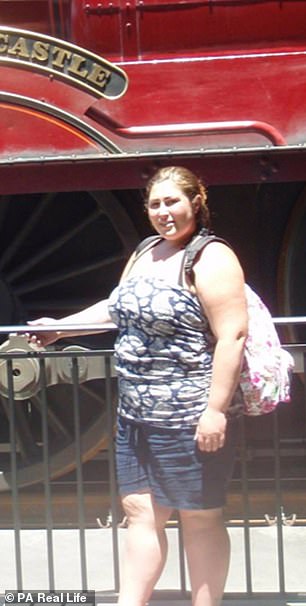 Having previously tipped the scales at 22 stone (left), Fran says she is now healthier than ever (right) 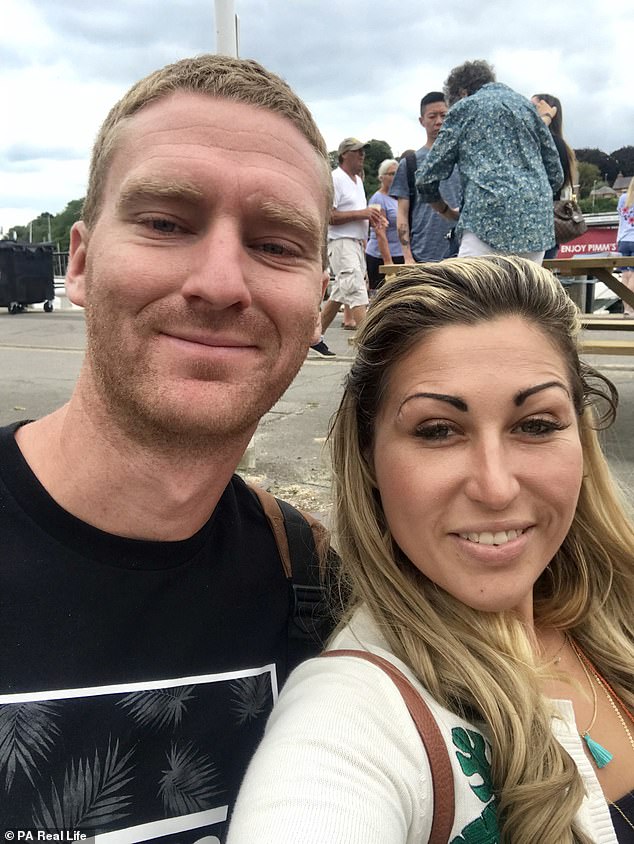 After a gruelling eight weeks of training, Fran found out she had passed the Dorset and Wiltshire fire service test in May this year and will be spending the next two years working on the job to become a fully-fledged firefighter.

She said: ‘It was pretty intense getting this far. I had to haul equipment weighing up to 40kg (6st 2lb) and was taking part in a bleep tests – something I thought I’d left behind in my school days.

‘It’s all been worth it though, and I feel like after almost 20 years of being nothing more than the fat girl, I’m finally going to be giving something back to the community and keeping fit at the same time.’