A  skateboarding group who have filmed themselves putting their lives in danger by crossing busy roads in front of cars have defended their actions.

But locals have slammed their actions as dangerous and want them to stop.

In the videos the riders are seen coming within metres of cars as they turn corners or losing control in the middle of the road.

They perform some of their stunts on Corkscrew Road at Montacute, which are notoriously dangerous. 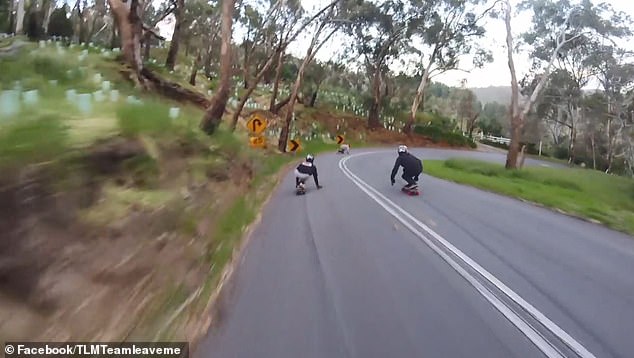 One rider is almost felled by a flock of birds while others simply wipe out or smash into hills next to the road.

The skateboarders weave across double lines regularly but assure people they know what they are doing as ‘experienced riders’.

However locals said the behaviour was dangerous, not just to the skateboarders but to the community and they wanted to see something done.

Lisa Crompton lives on one of the downhill roads used in the videos and said while it ‘looked fun’ it’s not something she would let her children do.

‘It happens regularly and over the years we have complained about it, it’s quiet illegal to ride skateboards on roads that have a double unbroken centre line,’ Mr Spragg said.

A spokesperson for Team Leave Me assured worried locals they were experienced riders who knew what they were doing.

‘We are all very experienced riders and have travelled the world skating in world-class events. There needs to be more support from local authorities including the government,’ the spokesperson said.

They also assured locals on dangerous sections of the road they always place ‘spotters’ to make sure everyone is safe.

Daily Mail Australia contacted Team Down Hill who were unable to comment at the time of publishing. 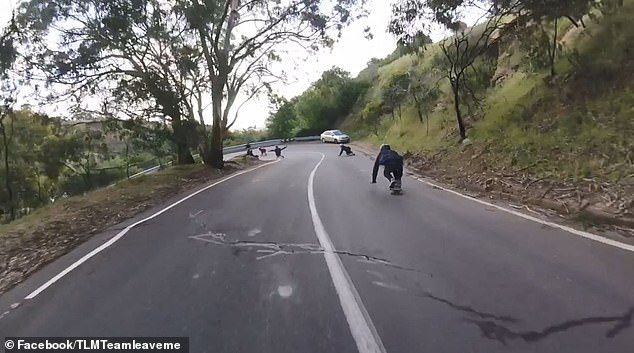