This is the skin-crawling moment a cockroach is found scuttling around inside a man’s ear while a doctor tries to remove it.

The man had arrived at a clinic in Bar Giant Province in Vietnam claiming there was an insect inside his ear that was causing him unbearable pain.

After the doctor inspected the man, the cockroach was found crawling through his ear canal.

Footage shows the cockroach moving around inside the man’s ears and twitching his antennae.

A cut can be seen on the inside of the man’s ear, possibly caused by the cockroach that continues to run around inside.

Reluctant to leave, the cockroach seems to deliberately ignore all of the doctor’s attempts to get it out.

The doctor tries to force the insect out by dragging it which a thin metal stick.

When this continues to fail, he decides to try syringing the man’s ear with salt water.

It doesn’t take long before the cockroach has had enough of the watery assault and decides to leave the man’s ear. 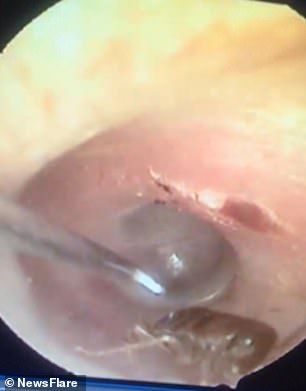 A man had arrived at a clinic in Bar Giant Province in Vietnam claiming there was an insect inside his ear that was causing him unbearable pain. The doctor found a cockroach scuttling around inside the ear canal and tried to remove it with a metal stick

Cockroaches are attracted to human ears because they like the smell of earwax.

According to The Verge, Coby Schal, an entomologist at North Carolina State University, said: ‘Our earwax radiates cockroach-wooing chemicals’.

They like small, warm, humid places so ears are the perfect habitat for them.

However, the dangers from having a cockroach crawl into your ear come once the insect dies. 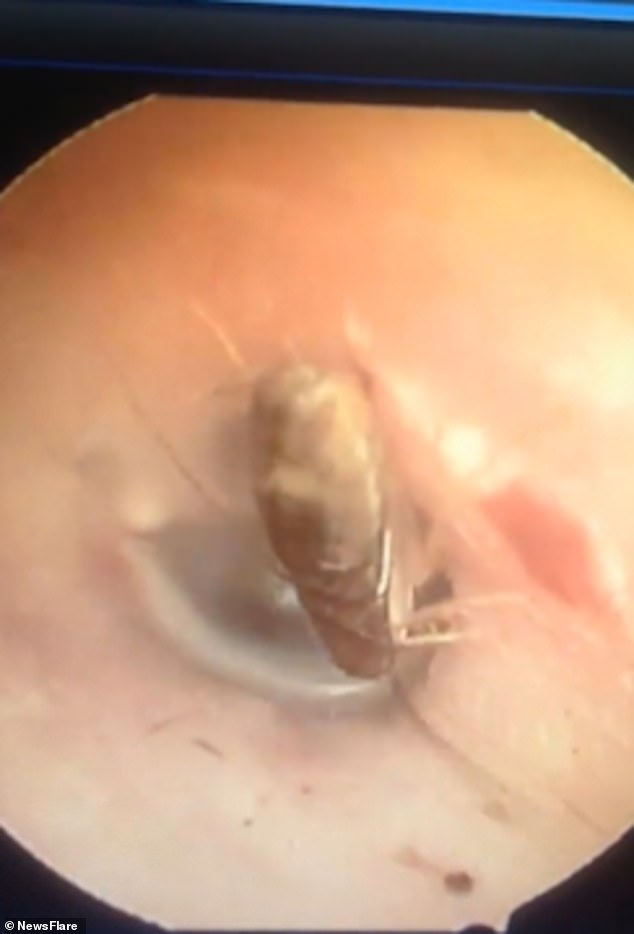 After a few failed attempts with the metal stick, the doctor uses a syringe of warm saltwater to force the cockroach to finally leave

The discomfort they create will no doubt result in the affected person scratching their ear and this usually ends up killing the cockroach.

They are then left ruptured and oozing bacteria which can easily cause infection.

Insects are known to cause great discomfort if they are in a person’s ear because they can bite or sting the person.

They can also create a buzzing or scraping sound from constantly moving around which can be distressing.