Skipper your own boat and chart a course on the canals, rivers and lakes of Britain

Self-catering holidays in the UK are booking out fast — so this might be the year to consider hiring a boat, whether it be a self-drive motor cruiser or canal barge. You’ll have your own, ready-made bubble and for first-timers it’s a chance for a gentle adventure.

Some jaunts afloat involve brawny duties such as winding lock gates open and shut. On others you just relax, take things easy on the water and explore.

Here is a pick of boating holidays on canals and other waterways in the UK, plus more ideas elsewhere around Europe. None requires previous experience.

ALL ABOARD THE BROADS

The Norfolk Broads are England’s classic boating country, which can properly be explored only from the water

Wide, watery expanses, scattered woodland and reedy green marshes teeming with wildlife. These are the Norfolk Broads, England’s classic boating country, which can properly be explored only from the water. Shallow lakes are connected by hundreds of miles of artificial waterways sprinkled with quaint villages, riverside inns and the occasional stately home.

Unlike on a canal, there are no locks to negotiate, only posts and buoys marking the channels.

In a slow, laid-back week on a cabin cruiser you can expect to discover just a small part of this hidden world. Nature lovers are entranced by diving otters and jumping fish, while dragonflies whine and herons watch from springy islands.

BOOK IT: From £1,215 for a week aboard a four-sleeping luxury cruiser (hoseasons.co.uk).

I KENNET BELIEVE IT! 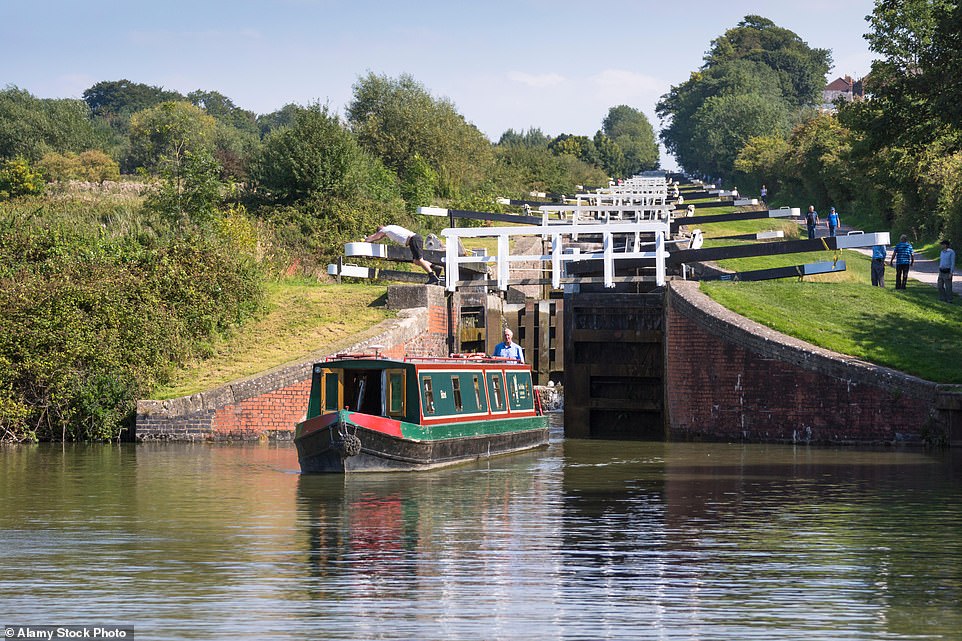 The Kennet and Avon Canal, constructed to link Bristol, via the Avon, with Thames tributary the Kennet, is an ‘all-time favourite’

Bath and Bradford-on-Avon are beauties, and a dally journey through the Vale of Pewsey along the Kennet and Avon Canal is about as enchanting as a narrowboat holiday gets.

Add the soaring Avoncliff and Dundas aqueduct spanning the Avon valley, and you begin to appreciate the ingenuity of those 18th and 19th-century canal engineers. That is before you even reach the astonishing flight of 29 locks climbing 250 ft up Caen Hill near Devizes.

There are numerous canalside options for a socially distanced pint on the bank. Several — such as that peach of a pub at Honeystreet, near Pewsey — are called The Barge Inn. No wonder the Kennet and Avon Canal, constructed to link Bristol, via the Avon, with Thames tributary the Kennet, is an all-time favourite.

BOOK IT: £1,383 for six nights on a two-cabin traditional narrowboat (foxhangers.co.uk). 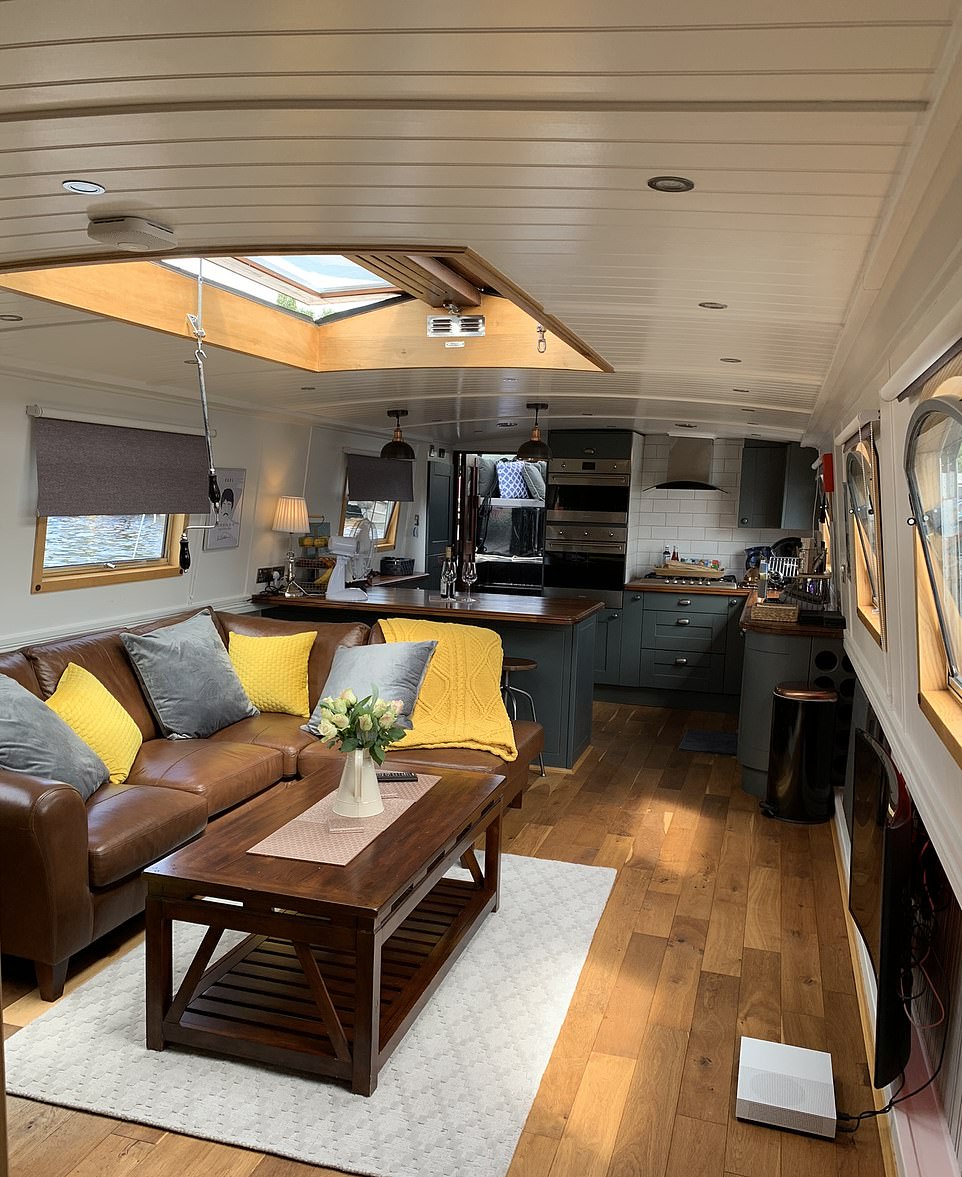 Candlewood has a luxurious galley and living area, plus two sumptuous cabins with Egyptian cotton sheets

IF Jerome K. Jerome, author of Three Men In A Boat, was this summer to retrace his 1889 route, he would find a lot still familiar. The rib-tickling classic took in Hampton Court, Windsor Castle, Monkey Island and the famous Oxford colleges. In recent years the Thames has become cleaner, with wildlife returning.

Jerome would be amazed by an upgrade from his rowing boat to the wide-beam river vessel Candlewood. Especially welcome would be the boat’s luxurious galley and living area, and the two sumptuous cabins with Egyptian cotton sheets.

BOOK IT: £2,493 for seven nights (riverthamesluxuryboat.com). 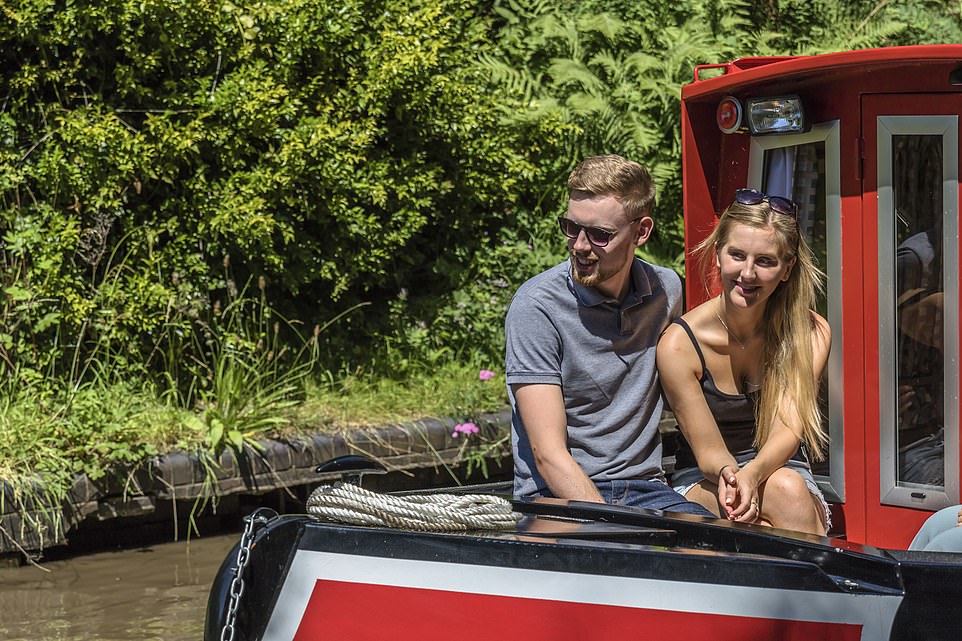 The Midlands Ring is a two-week wander through four counties, 115 locks and countless aqueducts and tunnels

In canal boating lingo, a ring means a circular route. The Midlands Ring is a superbly varied two-week wander through four counties. Starting at Gayton on the Grand Union Canal in Northamptonshire, you float through idyllic countryside for the first few days.

Then, chugging on through Warwickshire and Staffordshire, you find yourself in a living heritage museum of the great canal age and Industrial Revolution.

The ring takes in the Trent and Mersey, Coventry and Oxford canals. Arrive back where you started after 115 locks and countless aqueducts and tunnels.

BOOK IT: £3,374 for 14 nights aboard a two-cabin, four-berth narrowboat (abcboathire.com). 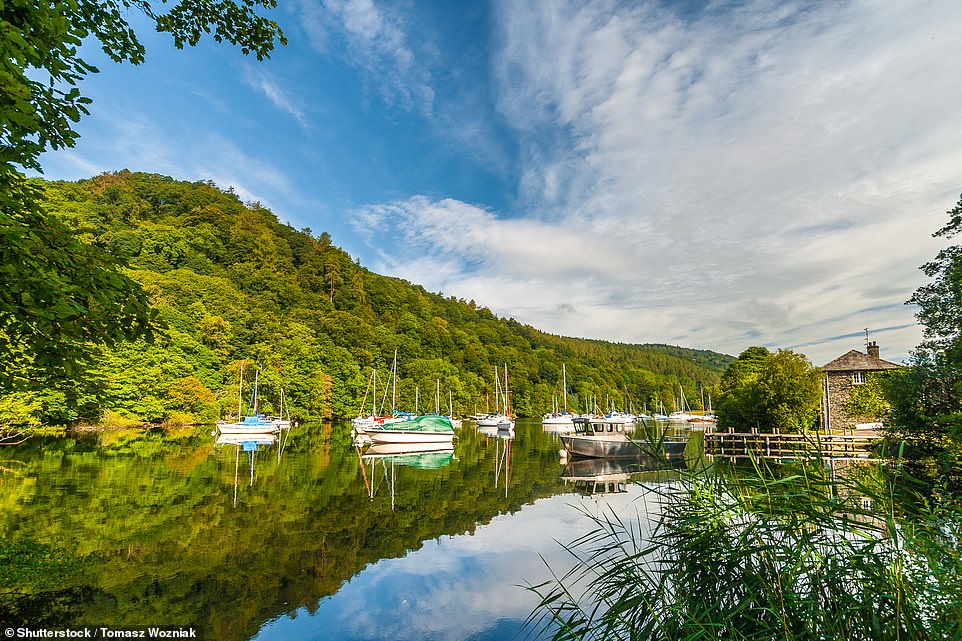 Discover the mysteries of the largest and most alluring lake of all, Windermere in the Lake District

With its purple-headed mountains, craggy fells and thundering waterfalls, the Lake District is higher in elemental drama than anywhere in England. But it is the sinuous stretches of water that lend this region its name and, more than anything, draw visitors from all over the world.

This year will be much quieter — all the better to rent a luxury electric boat for a series of day trips. Discover the mysteries of the largest and most alluring lake of all, Windermere. To glide over the glassy surface helps you understand how Wordsworth and the other Romantic poets found inspiration.

BOOK IT: £205 per day (up to eight hours) for a luxury electric boat from Bowness Bay marina for a maximum of six people (bownessbaymarina.co.uk). 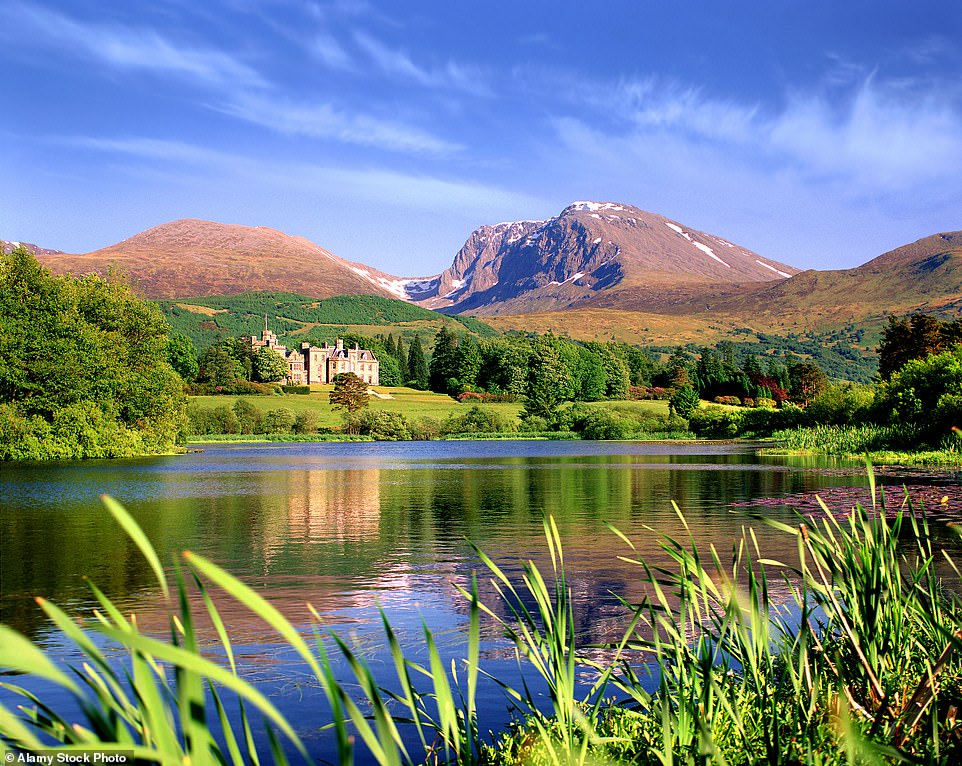 The majesty and history-soaked romance of the Scottish Highlands unfurl along the Caledonian Canal. For 60 miles this waterway cuts through the rugged landscapes of Great Glen, between Fort William and Inverness, connecting a string of lochs.

Ben Nevis is the breathtaking backdrop as your live-aboard motor cruiser wends its way east and climbs eight-lock Neptune’s Staircase. You pass Fort Augustus and Urquhart Castle at the edge of Loch Ness before reaching Inverness and heading back.

On a week’s return voyage, there is plenty of time to moor up and bag a Munro (tall mountain) or two. Or just to sit and drink in the sublime beauty while looking out for wildlife (monstrous or otherwise).

BOOK IT: £2,293 aboard a two-cabin cruiser for a week from Laggan near Fort William, for a maximum of six people (leboat.com). 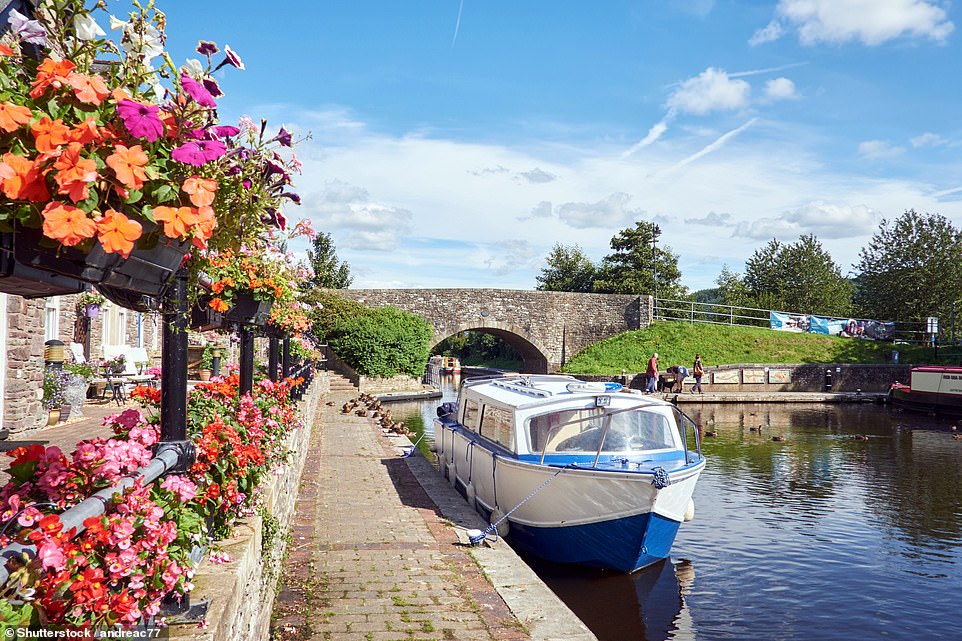 The Monmouthshire and Brecon cuts 35 glorious miles through the mountains of South Wales between Pontypool and Brecon, partly in the Brecon Beacons National Park

Purr rather than putter the length of Britain’s only canal offering electric narrowboats. The Monmouthshire and Brecon is scenically stupendous. The canal cuts 35 glorious miles through the mountains of South Wales between Pontypool and Brecon, partly in the Brecon Beacons National Park.

Punctuated by the occasional waterside pub and with few locks, this is canal boating at its most relaxing. You take it at a dawdling pace because the speed limit is 2 mph (rather than the 4 mph norm). The area is also a Dark Sky Reserve.

BOOK IT: From £825 for four nights on a four-berth electric barge (castlenarrowboats.co.uk).

Mysterious and mythical Lough Erne is two lakes connected by the River Erne. Enniskillen town and its walled castle straddle this splintering river.

Some 150 wooded islands are strewn across the maze of interconnecting lakes, rivers and backwaters. A few, which you can chug up to on your motor cruiser, have long histories of habitation: Devenish Island has the ruins of a 12th-century monastery.

BOOK IT: From £1,180 for a two-cabin cruiser for a week, starting from Bellanaleck in Northern Ireland (cruise-ireland.com).

FARTHER AFIELD – FROM FRANCE TO FINLAND 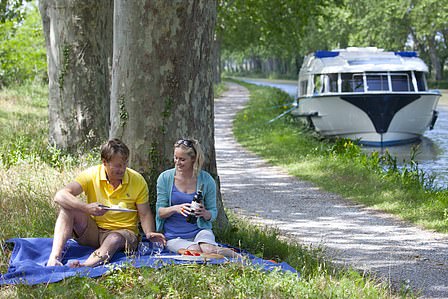 Canal du Midi is France’s greatest inland waterway, and a Unesco World Heritage site. Drift from Toulouse down to the Etang de Thau on the Mediterranean, while vineyards and fields aflame with sunflowers unfurl across southern France. Call in at villages to stock up on cheese and wine (leboat.com).

With water and bikes woven into the Dutch way of life, a patchwork of canals fringed by cycle paths spreads out across the pancake-flat land of the Netherlands. Ease out of Amsterdam on the liquid highways that radiate from the capital. Then cruise the backwaters admiring the tulip fields and windmills (locaboat.com).

From the boating base of Nieuwpoort bordered by North Sea dunes in Belgium, it is a leisurely cruise to picture-book Bruges with its old town laced with Venetian-like canals. Then putter past meadows and medieval villages to Ghent, stopping on the way for moules-frites and beer (boatingholidays.com).

Rent a swish motorboat with spacious cabins on oceanic Lake Saimaa, the largest of Finland’s thousands of lakes. Land on islets, skirt the forest shore, trail a fishing line for grayling to grill for supper, or moor at a lakeside village (saimaaboating.fi).

Summertime and the livin’ is easy on the huge manmade lake Grande Lago created 20 years ago in Portugal’s sun-baked Alentejo region. Spend lazy days cruising or swimming in clear water. Sleep on a choice of boats ranging from spartan to luxurious (boat-renting-nicols.co.uk).

Northern Germany’s ‘Land of a Thousand Lakes’, between Berlin and the Baltic coast, is a gorgeous, watery expanse. Your cabin cruiser plies the waterways between Fürstenberg and Untergöhren, passing fairy-tale castles in the forests of the Müritz National Park. Then spill into the peaceful expanses of Lake Müritz where common cranes flock in their thousands (locaboat.com).

Hungary’s Tokaj wine country is one of the lesser-known areas in Europe for a self-drive boating trip. Vines blanket the foothills of the Zemplen Mountains. From Tokaj town, hub for the world-renowned sweet, golden-hued wine, cruise the River Bodrog (boat-renting-nicols.co.uk).