U.S. First Lady Michelle Obama kept up her charm offensive in China by visiting the site of the terracotta warriors – but briefly talked about politics calling on the Chinese government to open up the internet to all of its citizens.

The First Lady, along with daughters Sasha 12, and Malia 15, watched a folk dance by local performers during her visit to the City Wall, in Xi’an, Shaanxi province and later joined in by dancing and skipping rope, much to the delight of her Chinese hosts.

First mother: U.S. first lady Michelle Obama (C) hugs her daughters Malia (L) and Sasha (R) as they watch a folk dance by performers during her visit to the City Wall, in Xi’an, Shaanxi province 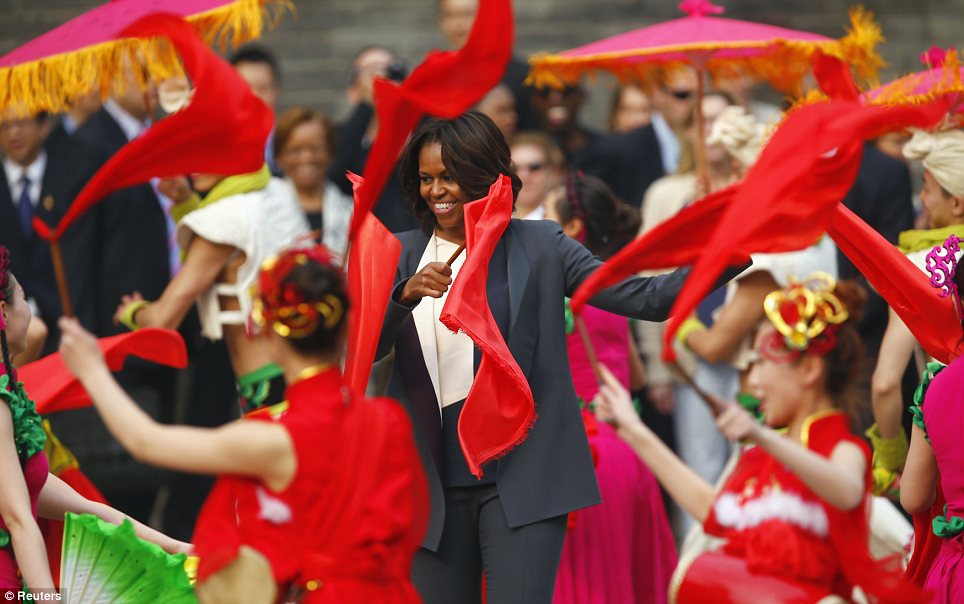 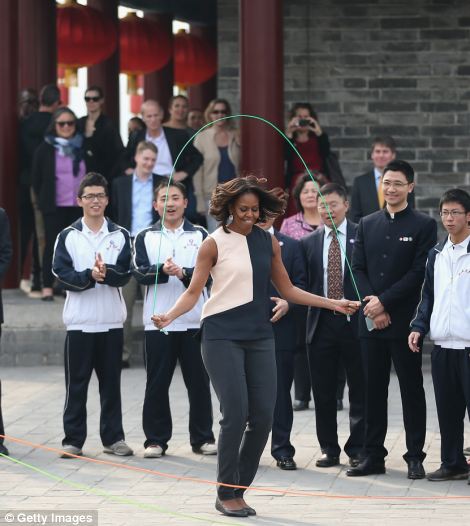 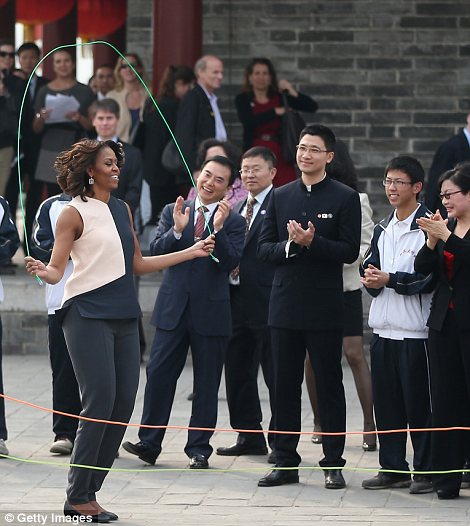 Skipping: First Lady Michelle Obama (Center) shows off her skills as she skips while Chinese dignitaries and children applaud during a visit to the Xi’an City Wall Mrs Obama and her daughters stood in one of the largest pits at the site of the Teracotta army which is located outside Xian, in the northern province of Shaanxi to view the stunning ancient statues while a guide showed them around.

Since her arrival in Beijing on Thursday night Mrs Obama has focused on talking about soft issues. 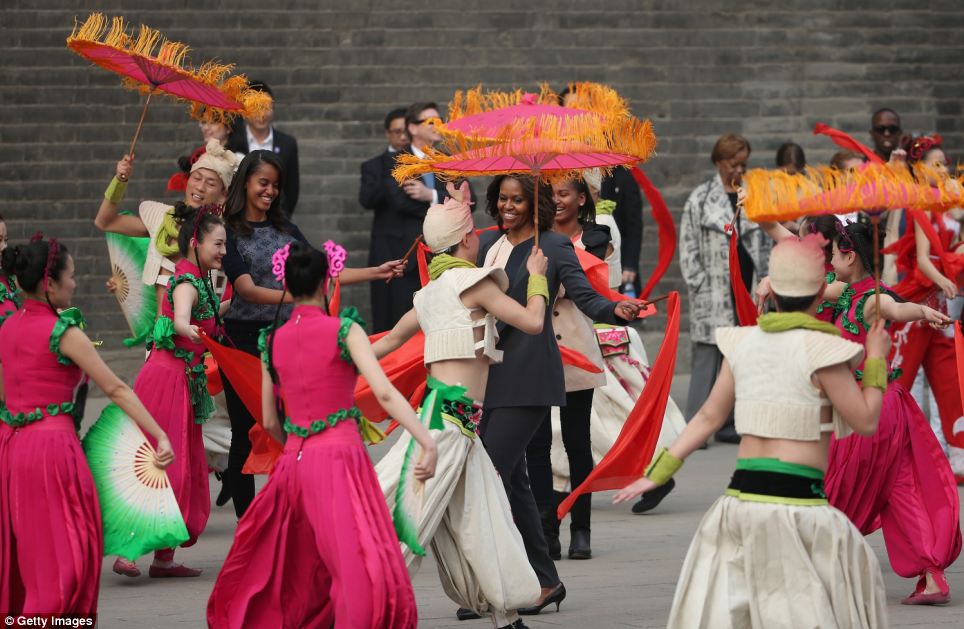 Enthusiastic guest: Mrs Obama, along with her daughters, throws herself into the occasion during the visit to the Xian City Wall 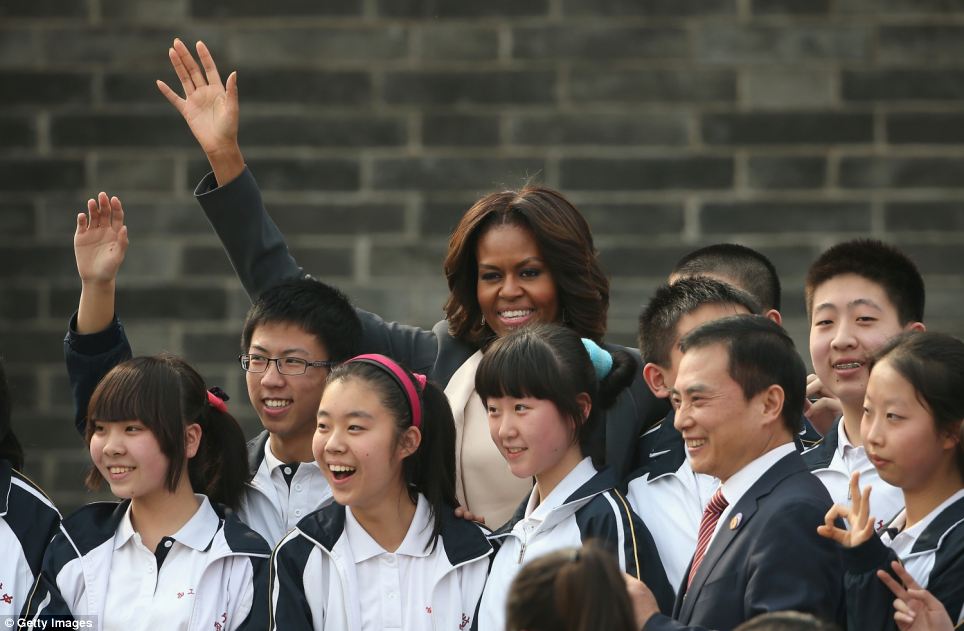 Educating: The First Lady posed with schoolchildren during the trip. She is officially in China to help promote education and has widely steered clear of controversial issues 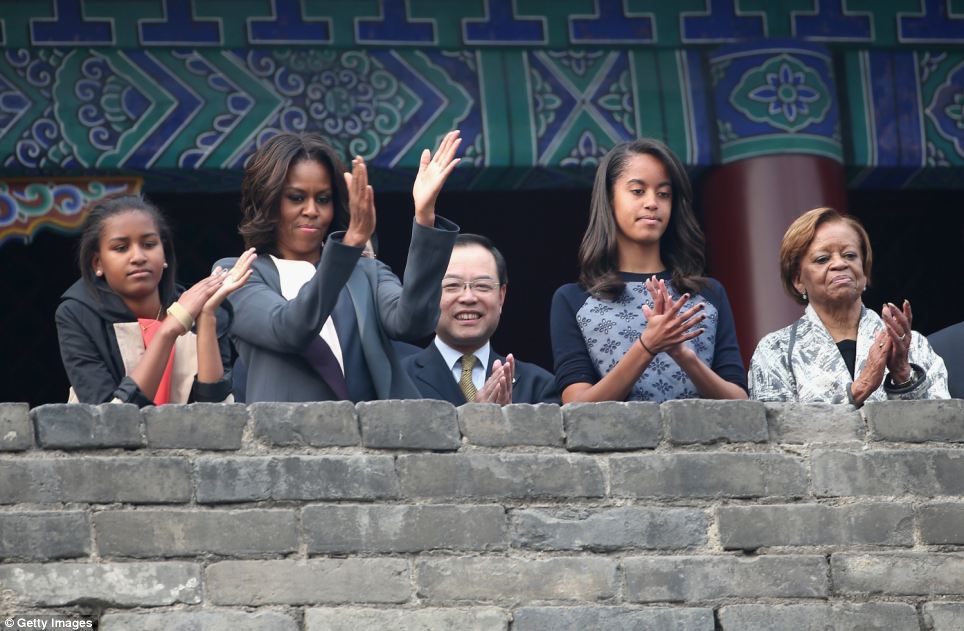 Grandma diplomacy: Mrs Obama has brought her mother Marian Robinson (far right) along on the trip as part of a nod to traditional family values Audience: The family watch the performance from the top of an ancient city wall

She promoted education and study abroad whilst on a tour of the Forbidden City, a former imperial palace, with her counterpart Peng Liyuan and avoided speaking about human rights or freedom of speech.

But at her first and only speech on Saturday at Peking University’s Stanford Centre she argued for greater internet freedoms.

Mrs Obama said that new technology can ‘open up the entire world and expose us to ideas and innovations we could never have imagined.’ 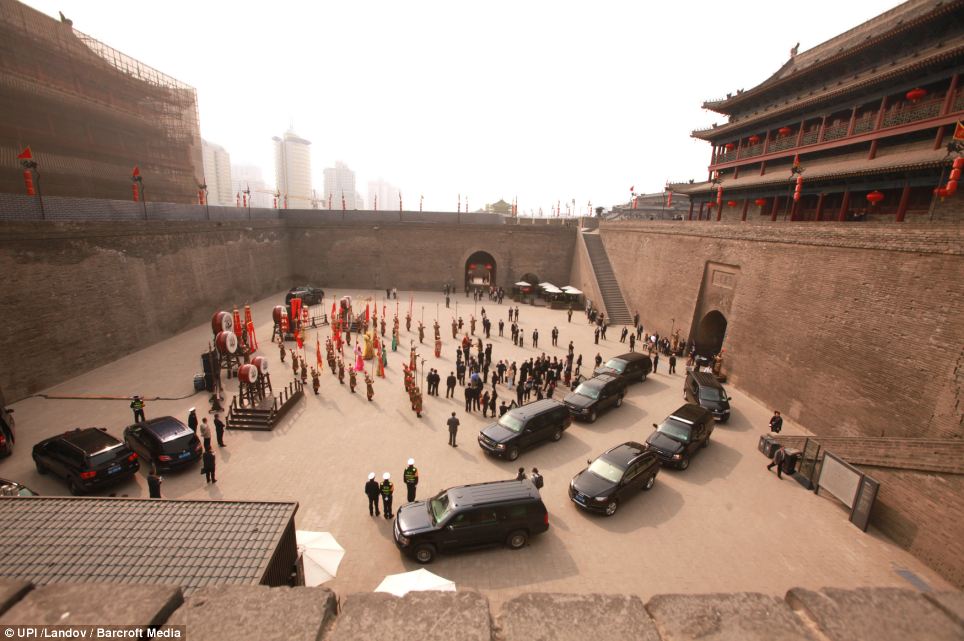 Convoy: Mrs Obama, her mother Marian Robinson and her two daughters Sasha and Malia arrive at the ancient walled city of Xi’an, China Walkabout: Mrs Obama, her mother and her two daughters, as well as the family’s delegation, are taken for a tour of the ancient city by their Chinese hosts 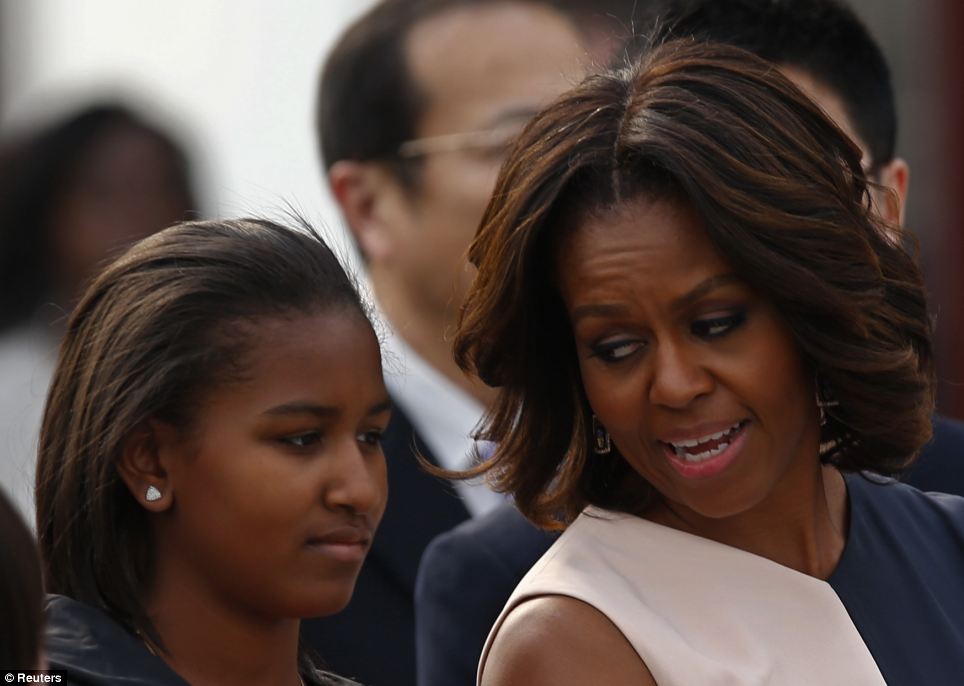 Motherly love: Mrs Obama chats to her youngest daughter Sasha during the family’s tour of the ancient city 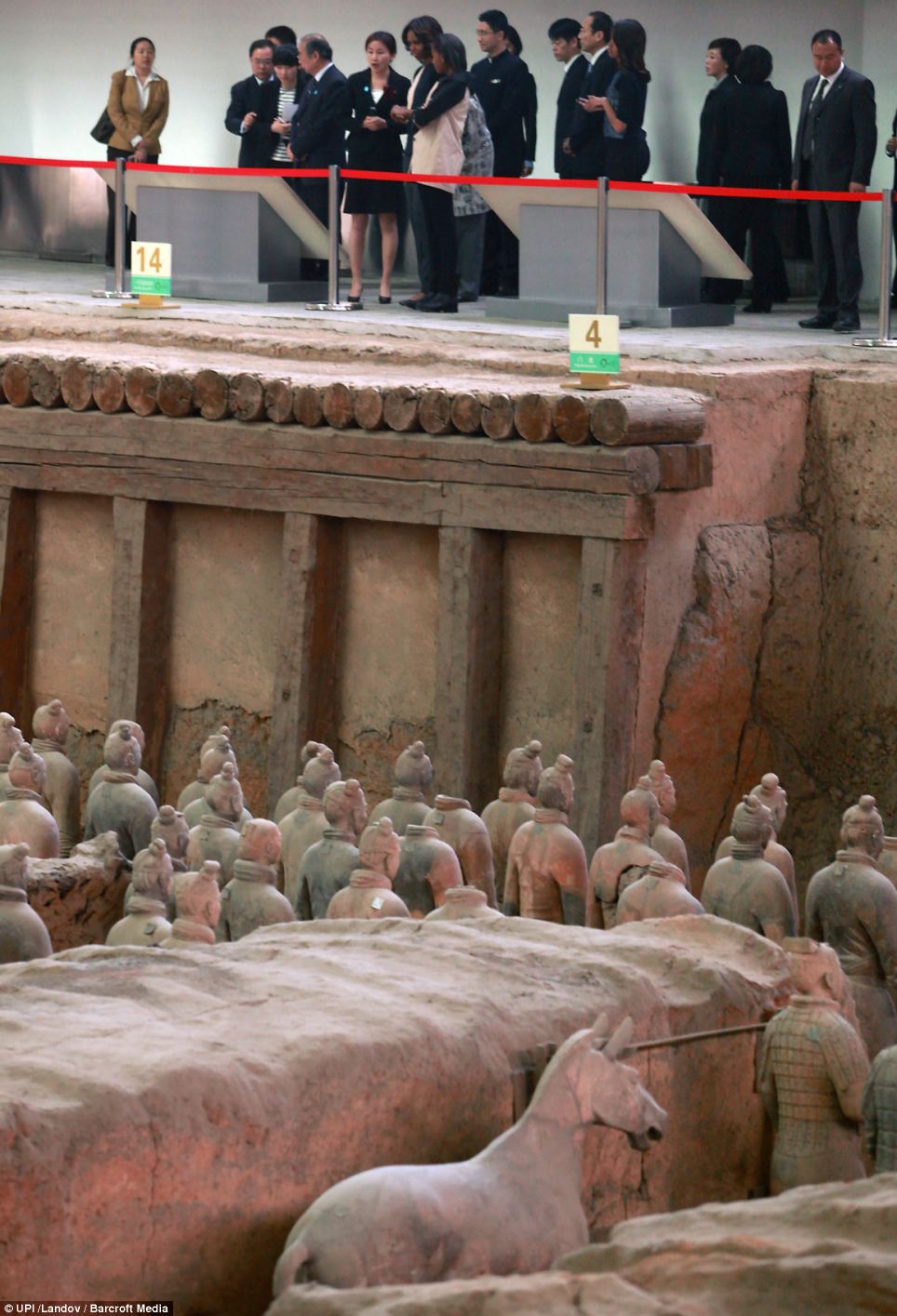 View from above: The Obamas look down on the hoards of Terracotta Warriors during their visit to the ancient City Wall

She added: ‘When it comes to expressing yourself freely, and worshipping as you choose, and having open access to information — we believe those are universal rights that are the birthright of every person on this planet.’

‘We believe that all people deserve the opportunity to fulfill their highest potential, as I was able to do in the United States’

The First Lady’s speech was at China’s oldest national university in northwestern Beijing. 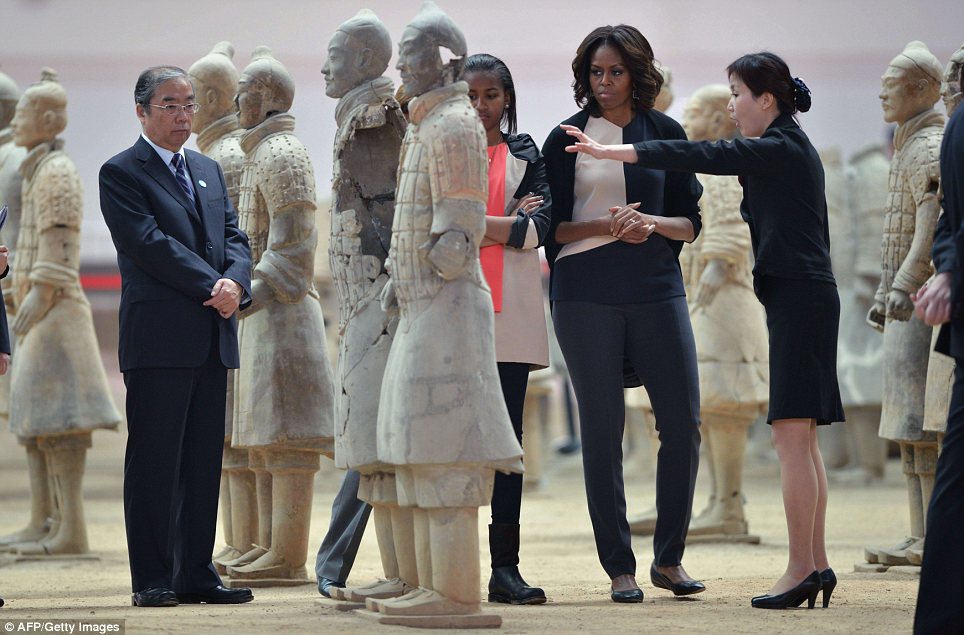 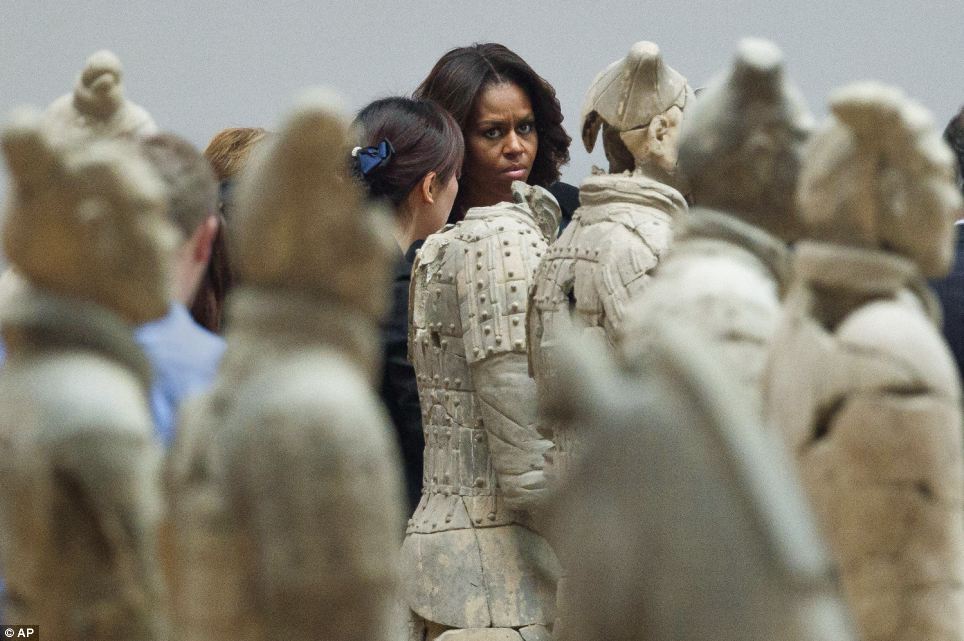 History: The First Lady listens intently as she is told about the Terracotta Warriors 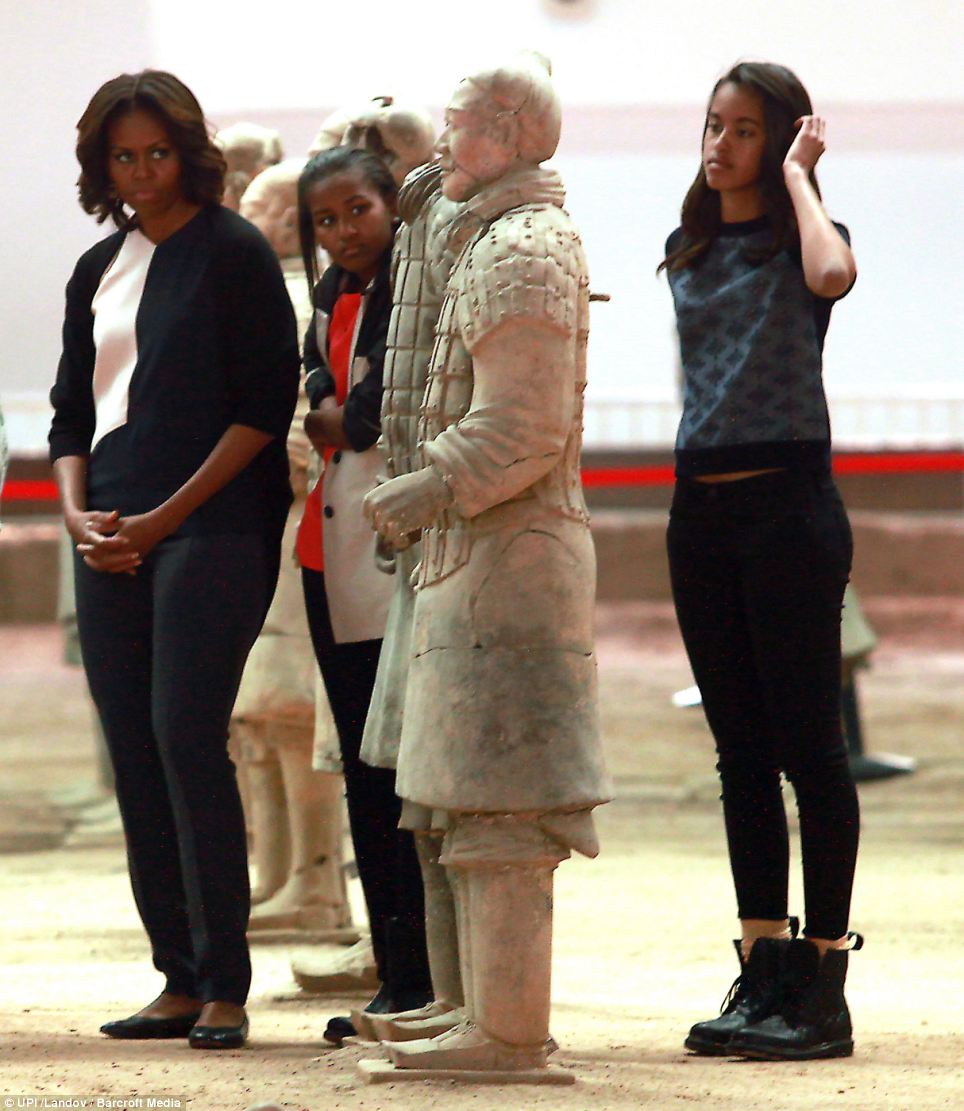 Fashion forward: Mrs Obama looked to have co-ordinated her wardrobe with that of her eldest daughter with both she and Malia sporting black skinny trousers and wearing their hair in loose curls

Speaking to a mixture of 200 Chinese and American students, Mrs Obama spent much of her speech promoting the values of study-abroad programs.

However, she was also keen to praise the power of the internet for its ability to spread freedom.

China has developed its own brand of social media sites like Weibo or Weixin which are extremely popular, in the absence of any other social media platforms.

Mrs Obama also warned that a government should not shield itself from criticism.

She said: ‘That’s how we decide which values and ideas we think are best—by questioning and debating them vigorously, by listening to all sides of the argument and by judging for ourselves.’ 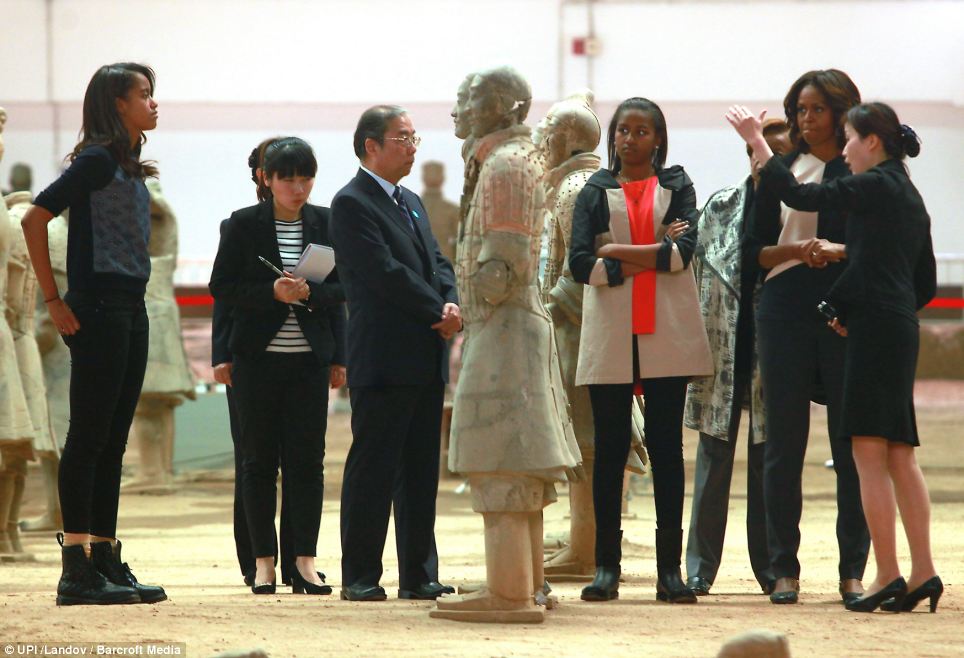 Lesson: The family were told of the history of the The Terracotta Army or the ‘Terracotta Warriors and Horses’, a collection of terracotta sculptures depicting the armies of Qin Shi Huang, the first Emperor of China 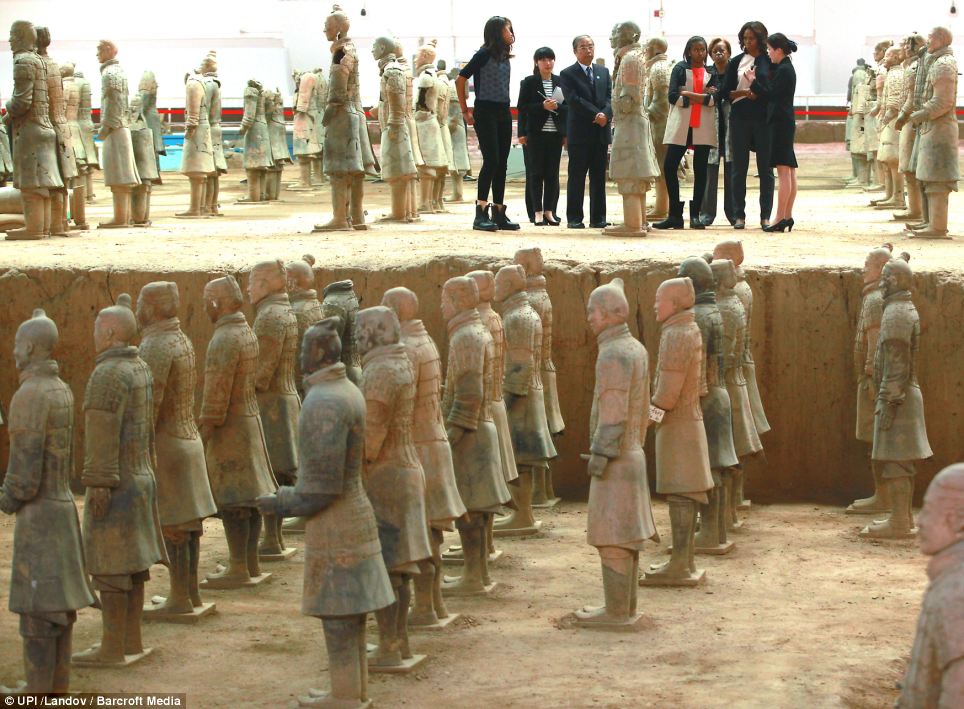 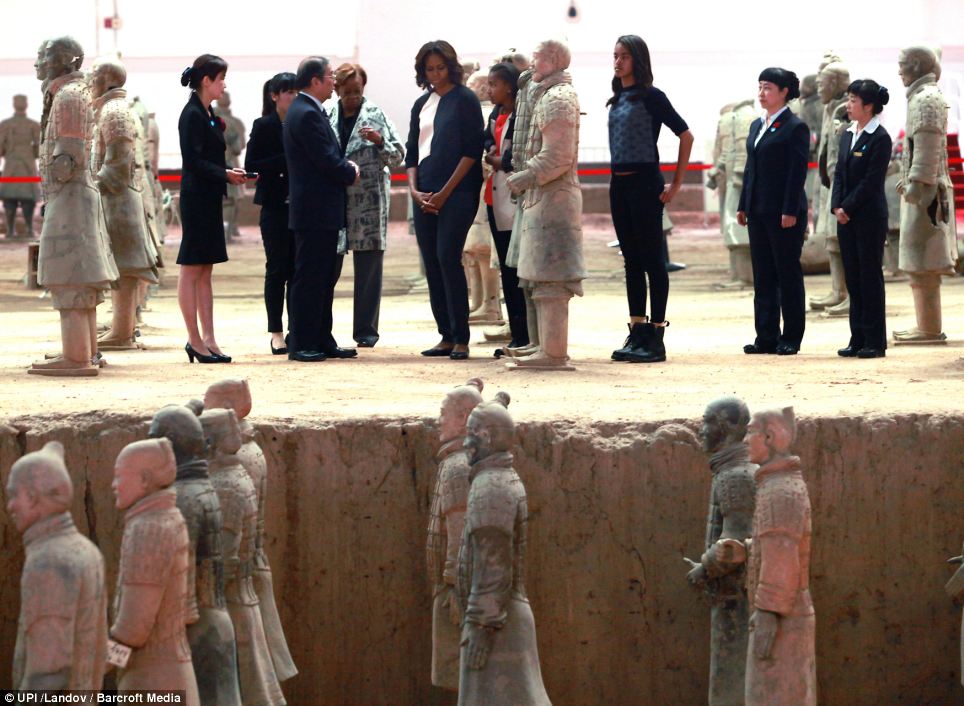 Educational visit: Mrs Obama, her mother and her two young daughters looked relaxed and were dressed casually as they made their way around the ancient models

‘And believe me, I know how this can be a messy and frustrating process. My husband and I are on the receiving end of plenty of questioning and criticism from our media and our fellow citizens, and it’s not always easy but we wouldn’t trade it for anything in the world.’

‘Because time and time again, we have seen that countries are stronger and more prosperous when the voices and opinions of all citizens can be heard,’ she said.

While Ms Obama’s trip has been largely successful, on Sunday, her motorcade was met with jeers from two people outside the U.S. embassy in Beijing. Police and men in grey sweatshirts hurried to subdue the protestors, and it was unclear why they were shouting.

In addition to her trips to see the Terracotta army, Mrs Obama and her daughters strolled along the Great Wall of China to the north of the capital to view another breathtaking Chinese monument.

Vendors at the tourist site appeared to have removed T-shirts that are typically on sale showing President Obama in a Mao hat, with one merchant revealing a boxful of the souvenirs stored in the back of her tent.

CHINA’S TERRACOTTA ARMY: THE ANCIENT WARRIORS WHO CAME BACK TO LIFE FROM 3 BC

The Terracotta Army or the ‘Terracotta Warriors and Horses’, is a collection of terracotta sculptures depicting the armies of Qin Shi Huang, the first Emperor of China. It is a form of funerary art buried with the emperor in 210–209 BC and whose purpose was to protect the emperor in his afterlife.

The figures, dating from around the late third century BC, were discovered in 1974 by local farmers in Lintong District, Xi’an, Shaanxi province. The figures vary in height according to their roles, with the tallest being the generals.

The figures include warriors, chariots and horses.

The Terracotta Army was discovered on 29 March 1974 to the east of Xi’An in Shaanxi province by a group of farmers when they were digging a water well around one mile east of the Qin Emperor’s tomb mound at Mount li (Lishan)a region riddled with underground springs and watercourses.

For centuries, there had been occasional reports of pieces of terracotta figures and fragments of the Qin necropolis– roofing tiles, bricks, and chunks of masonry – having been dug up in the area. 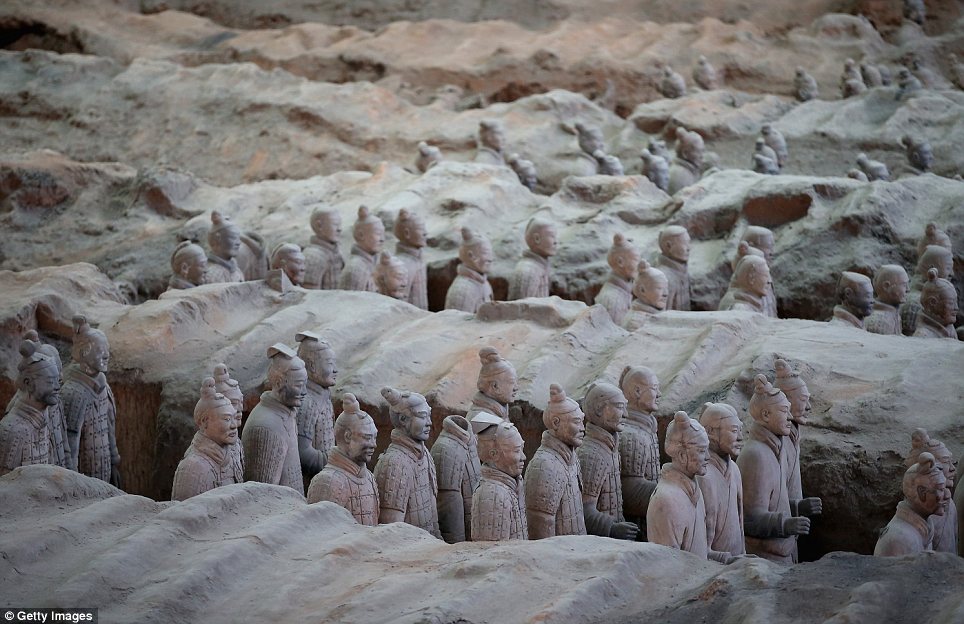 Army: Terracotta Soldiers line up in the Museum of Terracotta Warriors at the historic excavation site in china 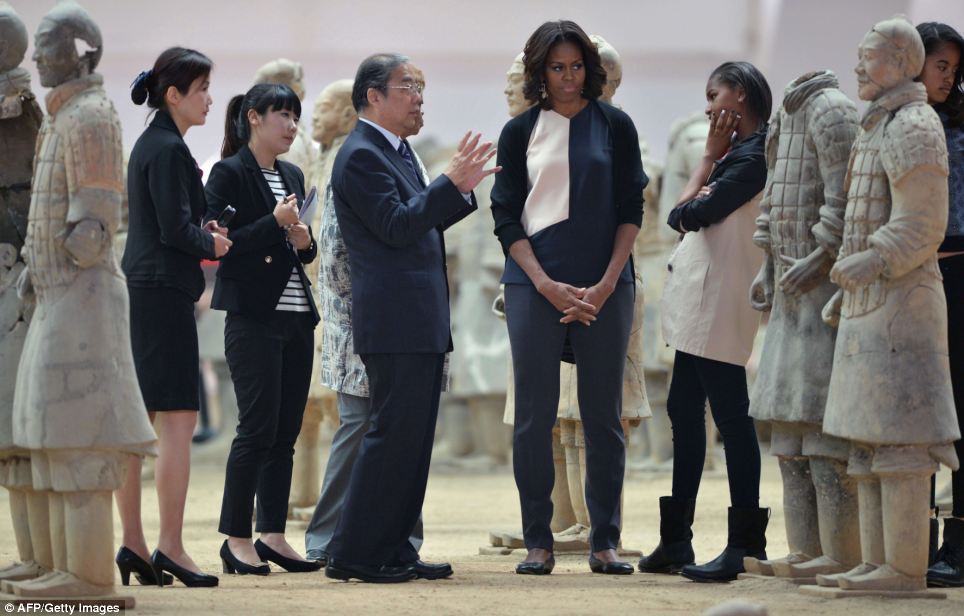 Fascinating history: US First Lady Michelle Obama (C) and daughters Sasha (centre R) and Malia (R) look at the Terracotta Warriors in China’s central Shaanxi province of Xian and learn more about their past Fun: Michelle Obama (L) laughs as she visits the Museum of Qin Terracotta Warriors and enjoys spending time with her daughters Sasha and Malia 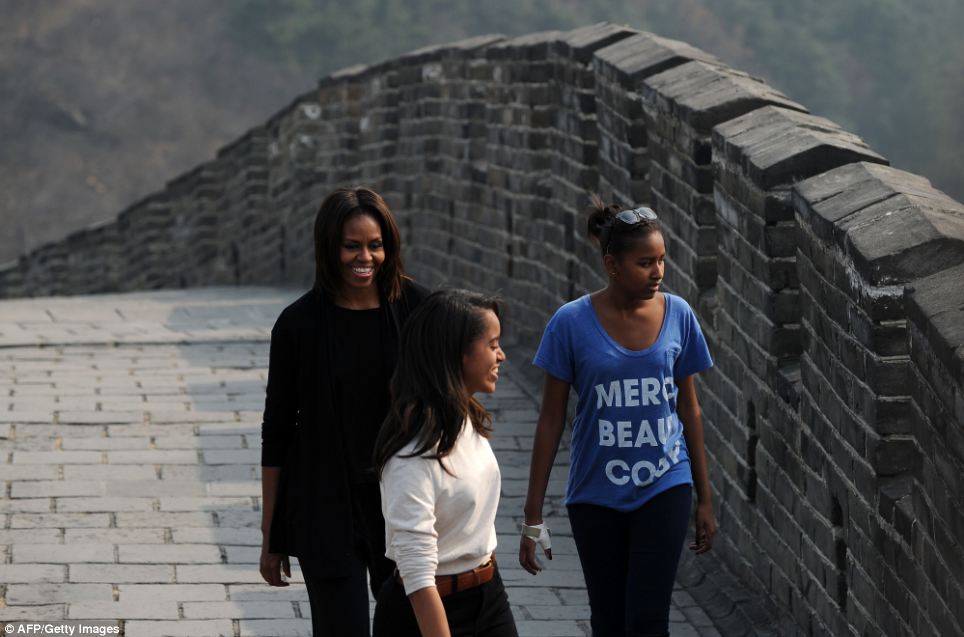 Great wall: US First Lady Michelle Obama (L) walks with her daughters Malia (C) and Sasha (R) during a visit to the Great Wall at Mutianyu, northeast of Beijing, on 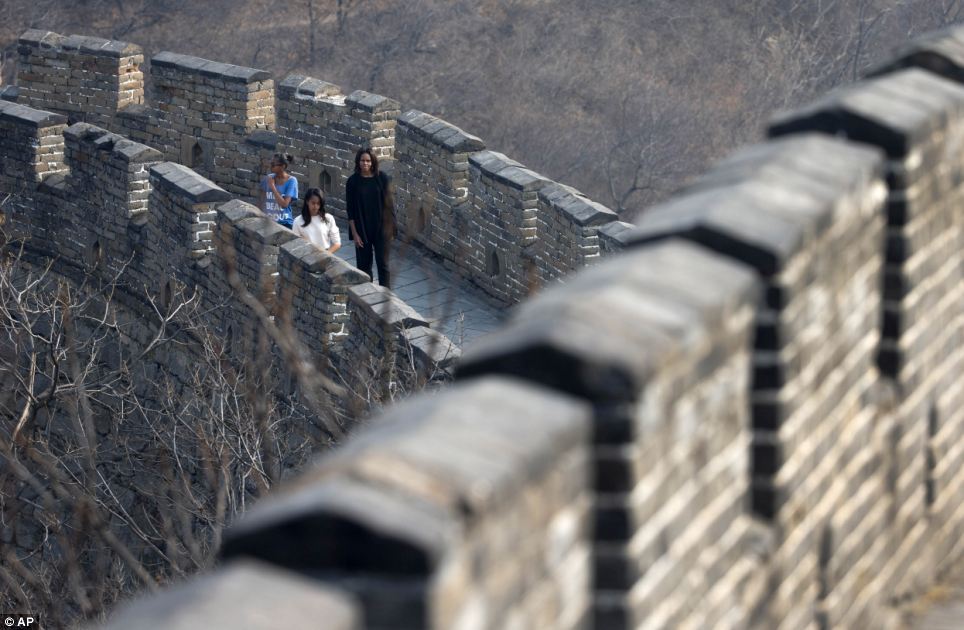 Strolling: Michelle Obama looks at the wall as she walks with her daughters Malia, front, and Sasha, left, as they climb the steps at the Mutianyu section of the Great Wall of China in Beijing Exploration: Michelle Obama (C) walks with her daughters Malia (R) and Sasha (bottom) during a visit to the Great Wall at Mutianyu, northeast of Beijing Keeping guard: A Chinese police woman stands guard on the wall as U.S. First lady Michelle Obama and her daughters, Malia and Sasha, visit the Mutianyu section of the Great Wall of China in Beijing, China Sunday, March 23, 2014