A slam-dunking otter who became one of the most famous animals on the planet when a video of his basketball skills went viral has died at the age of 20.

Eddie, who lived at Oregon Zoo, was considered one of the oldest sea otters in the world.

His hoops skills earned him worldwide fame throughout his golden years, but age finally caught up to Eddie, who had to be euthanized yesterday morning.

Oregon Zoo confirmed Eddie ‘the slam-dunking sea otter’ had suffered a decline related to his old age. He died just short of his 21st birthday.

He became an internet sensation in 2013 when a video of him slam-dunking his ball in a hoop went viral. 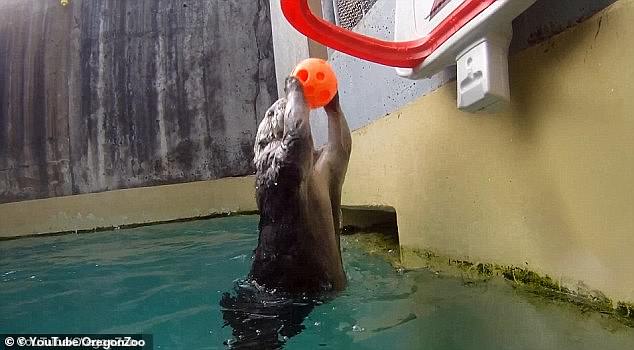 Orphaned as a pup along the California coast in 1998, and lacking the skills to survive on his own in the wild, Eddie was taken to the Monterey Bay Aquarium’s rescue and started on a rehab program.

Eventually he was deemed not fit for release by the U.S. Fish and Wildlife Service, and in 2000 and was sent to the Oregon Zoo.

As therapy for his arthritic elbow joints, keepers trained the aging otter to dunk a toy basketball in a miniature hoop.

A video about his behind-the-scenes exercise routine earned him more than 1.7 million views on the zoo’s YouTube channel and making him one of the most famous animals on the Internet.

Earlier this year the Portland Trail Blazers basketball team gave him a new hoop with their logo as a present for his 20th birthday.

Oregon Zoo tweeted yesterday: ‘In loving memory of Eddie. At nearly 21, he was one of the oldest and most-loved sea otters on the planet.’ 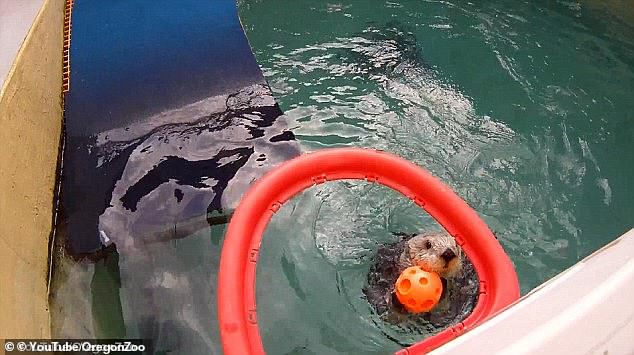 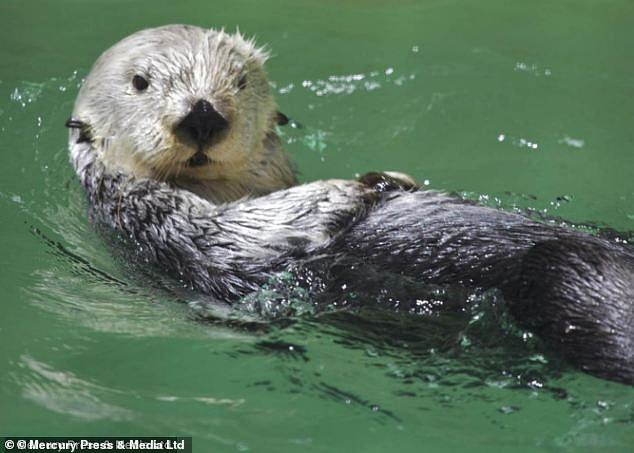 Eddie was orphaned as a pup and sent to Oregon Zoo when he was deemed ‘non-releasable’ by the U.S. Fish and Wildlife Service in 2000

Amy Cutting, who oversees the zoo’s marine life area, said male otters rarely live past the age of 15 and that Eddie was still very ‘feisty’ despite his old age.

She added: ‘Male sea otters seldom live past 15 years, so Eddie was among the very oldest of his kind.

‘He was quite feisty as a young otter, and we still saw that spirit come through during his later years.

‘He got along great with our two younger otters, Juno and Lincoln, and was often observed wrestling and playing with them.

‘But he was the elder statesman of the group, and they learned to leave him alone when he wanted to rest.’

Eddie’s death touched the basketball team as well, with a spokesman tweeting a tribute to the slam-dunking otter: ‘We’ll never forget our friend Eddie, a true ambassador for otters and the game of basketball. Thanks to the @OregonZoo for bringing him into our lives.’ 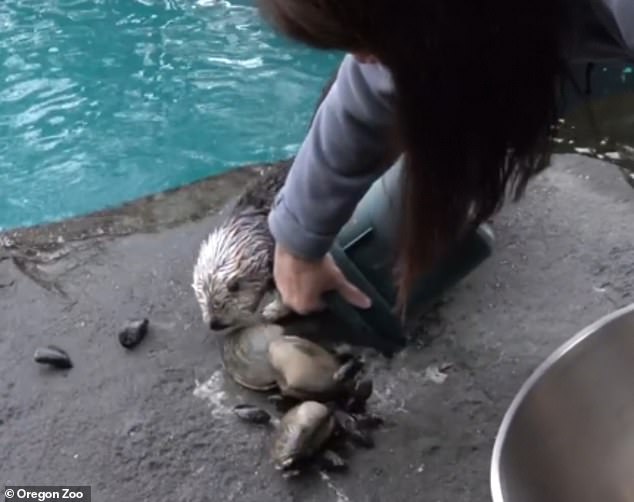 Eddie being fed by his keepers at Oregon Zoo. Despite reaching the ripe old age of 20, Eddie was euthanized after suffering a decline in health 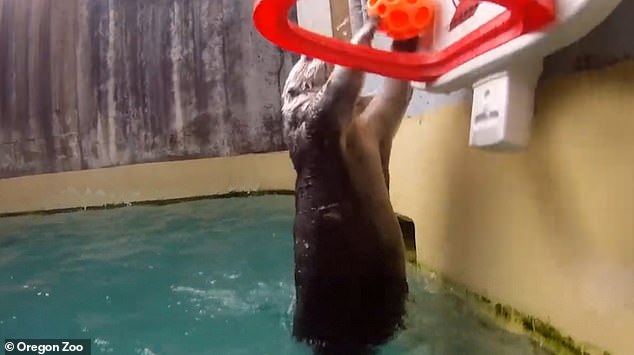 Sea otters are listed as threatened on the Endangered Species list and once ranged along the north Pacific Rim from Japan to Baja California, including along the Oregon coast.

Prized for their fur, the animals were hunted to the brink of extinction during the late 1800s and early 1900s.

Conservationists are now looking at the possibility of reintroducing them off the Oregon coast, where they have not established colonies since 1907.