Small breasts are classified a ‘physical defect’ by Russian officials

Small breasts are classified a ‘physical defect’ by Russian officials

Russian advertising standards officials have sparked outrage after declaring that a woman having small breasts is a ‘physical defect’.

The bizarre ruling came following complaints over a construction company ad which used a gratuitous image of a petite woman in lace underwear measuring her chest.

Activists had accused the advert, which declared that the company’s buildings had ‘small prices and lots of complexes’, was bodyshaming women, and officials agreed.

Thanks for nothing: Russian officials ruled that the advert projected an ‘offensive image of women’, and then added that small breasts were a ‘physical defect’

However, Russia’s Federal Antimonopoly Service (FAS) took one step forward and two steps backwards in their ruling declaring that the billboard had violated advertising laws.

The FAS fined the company and wrote that the advert had projected an ‘offensive image of women’, according to the Moscow Times.

However, the ruling added that an ‘expert council found that the advertisement points to physical defects in women (small breasts).’

The sudden classification of small breasts as being a ‘physical defect’ was seized upon by several Russians on social media. 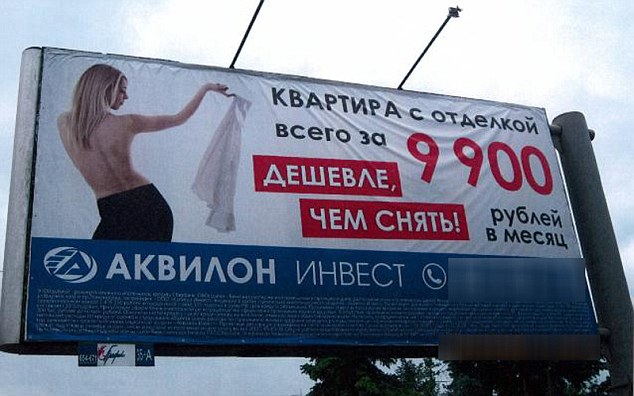 More controversy: Another advert by the same company which used a completely unrelated image of a half-naked woman to sell property

‘I wouldn’t be surprised if the Federal Antimonopoly Service staff don’t even suspect that there’s anything wrong or offensive to women about how they handled this,’ blogger and anti-sexism campaigner Nastya Krasilnikova wrote according to Meduza.

‘Probably, the person who wrote this thinks it’s perfectly obvious that a small chest is a physical disability.’

This is not the first time Akvilon Invest has come under fire over it’s billboards. In the past it has advertised flats as being cheaper than ‘renting’ alongside a picture of woman undressing, which according to Meduza was alluding to prostitution.

Another advertisement by the company used in January this year showed a picture of a larger woman, with the caption ‘even the discount is fatter after the holidays’.